Out today as well. Proceeds to go to CCP if it holds above the SPP.
J

Welp. Sold out too early. 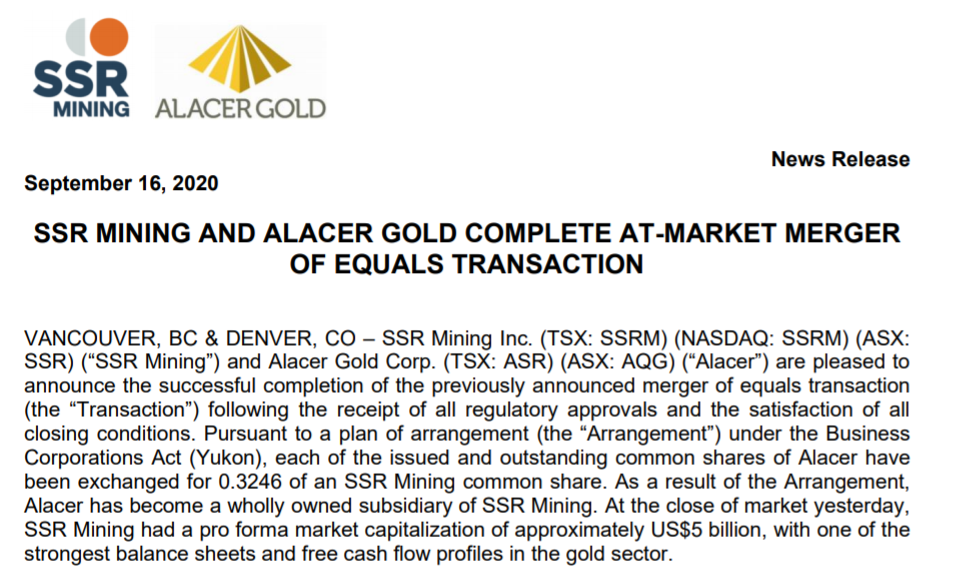 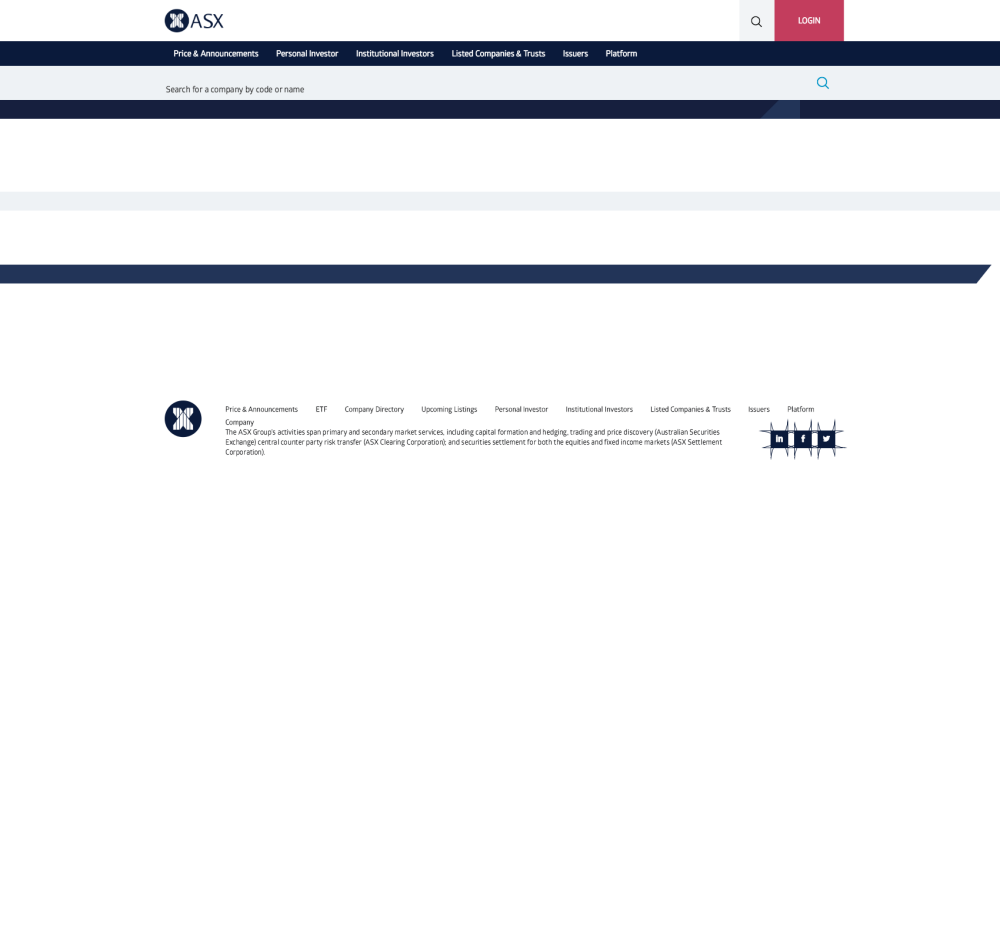 On September 24th, 2020, Alacer Gold Corp . (AQG) was removed from the ASX's Official List in accordance with the announcement released by AQG on 17 September 2020 and Listing Rule 17.11, following implementation of the Plan of Arrangement involving SSR Mining Inc. (SSR), AQG and the shareholders of AQG in order to effect the acquisition of AQG by SSR.

Code: SSR - the old Alacer Gold Corp (AQG) which I beieve was acquired by SSR Mining which I believe is the old Silver Standard Resources - see post above

Yes, so despite my plan of increasing cash holding, I found this hard to resist and bought 1,000 @ 21.67 today. Buying shares is the only kind of shopping I like. I am thinking of selling my Regis (RRL) holding at a 25% loss to fund this purchase and so avoid lowering my cash level.

I bought this largely from passively catching the enthusiasm of 'BtL finance' on Patreon after the June Qtrly but to sketch it out a bit, SSR mining (SSR) has operating mines in 4 countries: two tier1, USA and Canada, two tier 2, Argentina and Turkey.

Generating strong free cashflow, looks like $100m CAD for the June Qtr which it used mostly to buy back shares but also to retire a bit of debt and pay a dividend. Its cash holding far exceeds its debt.

It gives exposure to silver production as well as mainly gold and additionally has a mothballed 500m oz silver resource in one project which is not core and will likely be sold.

Doesn't have a lot of shares on issue, looks like about 215m all up, including 193m on the main exchange in Canada and 22m CDI's on the ASX - CDI's are 1:1 with the common shares. Modest options and perf shares.

More, probably, when I get into into it and I will amend any inaccuracies.

Note the code and name, SSR Mining Ltd (SSR) - I would change the thread title if I could. I bought another 500 shares last week @ 21.64. This one looks like a cracker and I owe the selection to betweenthelinesfinance (on Patreon and YouTube). I could have waited for the crash to start a holding but fomo compelled me. Besides they should be even more loaded with cash when the crash comes so that should provide some buoyancy? They were holding net cash of around US$500m at end of June reporting and subsequently sold their royalty p/f for another US$100m (of which 1/3rd was up front cash) They are bringing in free cashflow of US$100m a Qtr, which in June Qtr they used to buy back shares, pay down debt and reserve for a dividend. The heavy capital investment has already been done for the current stage of their producing assets. I just hope they hold on to their banked cash and not venture upon a new project until there is a crash.

There is no doubt that SSR Mining have done badly share price wise on the NASDAQ but resisted the more recent downturn. Fortunes are definitely looking up whilst the sector itself is in the doldrums and many shares thrashing about.

Tacking on a few more @ 20.57
Bargains out there for gold and silver bugs

Added 250 more @ 20.08
Cheap but will be cheaper in a crash. Got a nice net half a billion usd cash buffer though. Divs small and unfranked.
Chart sux - why am I buying, search me.

Video rundown of SSR Mining from the President/CEO of the company. Confident they can keep costs down below inflation. One of their mines is a silver mine that they're actually making money from at today's prices, other three mines are gold. They have in excess of US$500m cash net of debt and this is building. Returning capital to shareholders via on market buy-back. Long life mines with organic growth outlook from exploration. Sale of non core silver properties mooted. I am down 3% but plan on adding incrementally if I see significant discount to my average buy price. 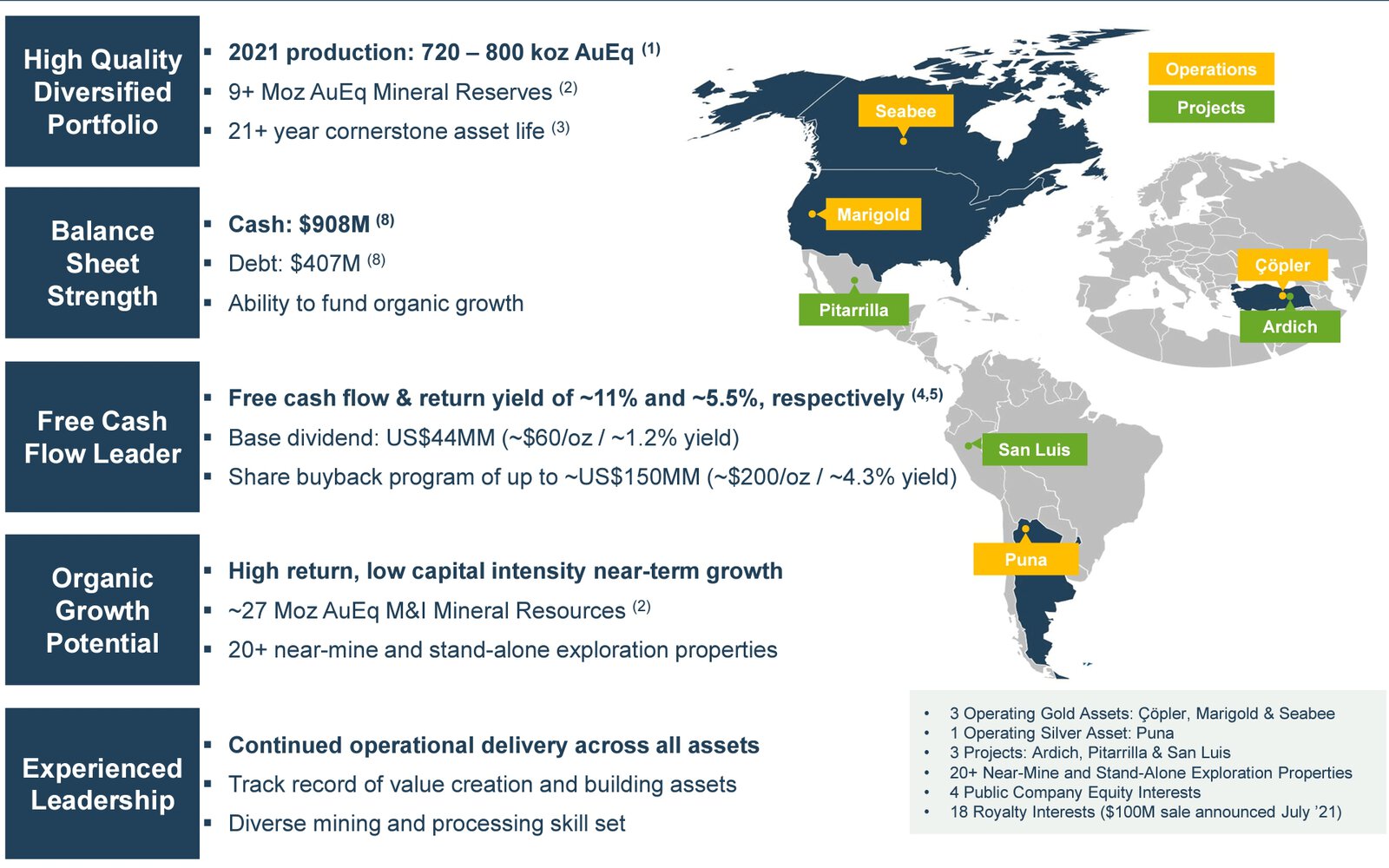 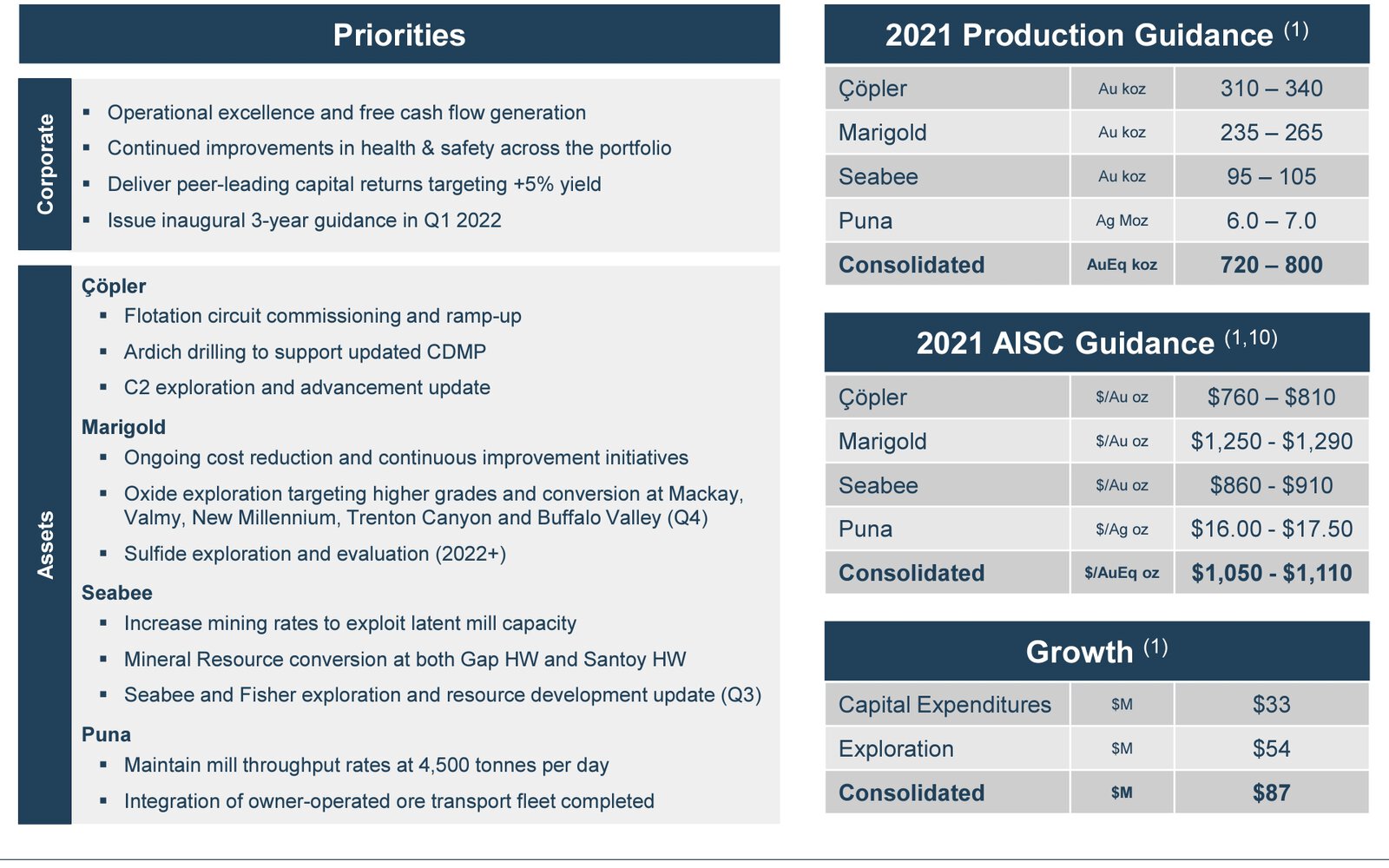 Is it possible to get this moniker changed to SSR Mining from Alacer gold??
Mick

Very good looking September Quarterly out from SSR. Generating even stronger free cashlow which it is directing into share buybacks, paying off a bit of the debt and delivering a (paltry) dividend. Share buybacks are expected to reach US$200m by year end (Dec). Three gold mines but their silver mine in Argentina is producing silver (with lead and zinc credits) for an AISC of US$12.32 an oz. SSR foresees significant organic growth with low capital demand for its current assets. 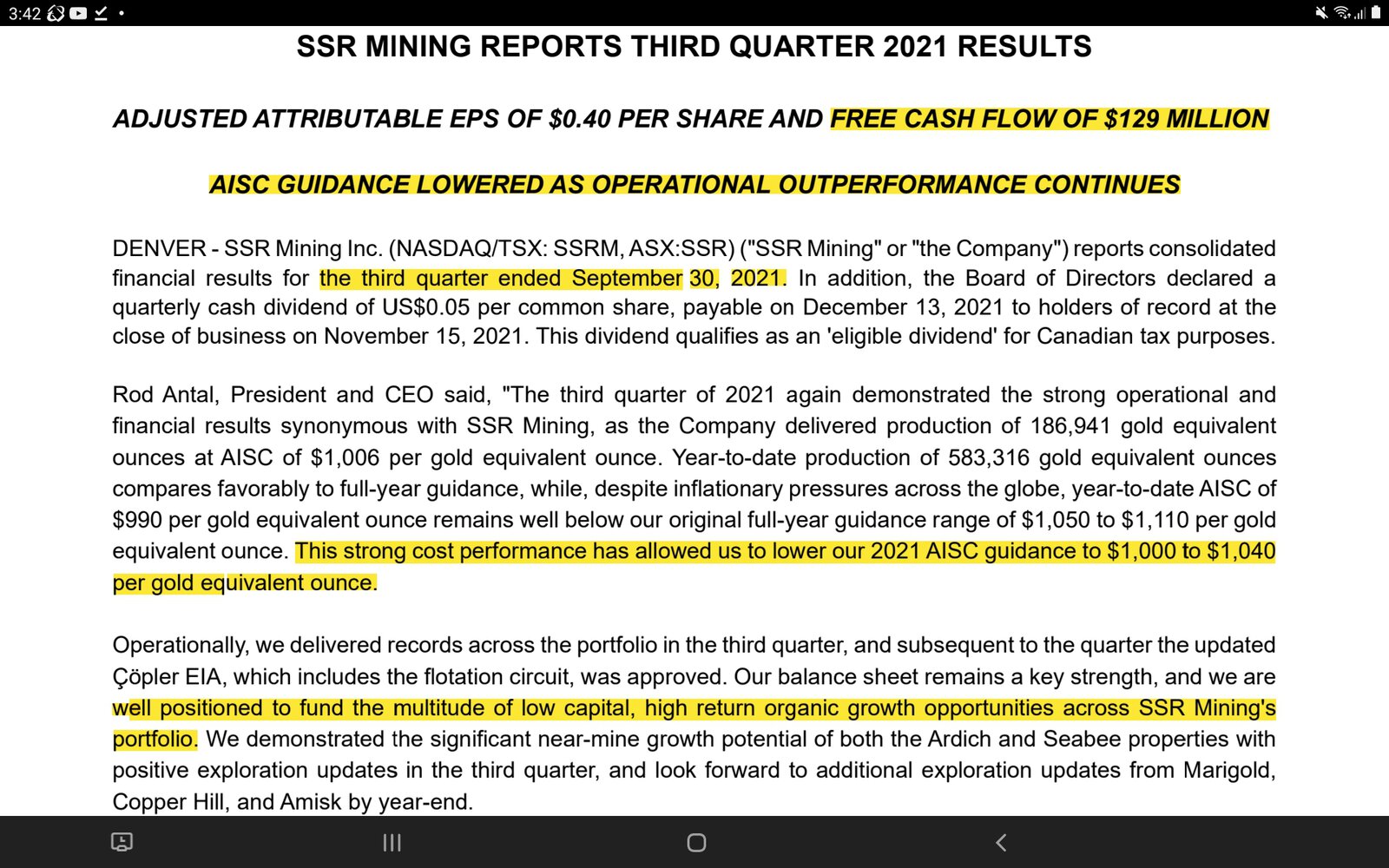 Had what I thought was a low ball bid at 21 partially filled on Tuesday.
Average buy in now at 21.35.
Be looking forward to what BTL says about this next time.
Mick

@mullokintyre
Yeah, if BtL does one that goes to youtube I'll post it for those not getting it about this company

finicky said:
@mullokintyre
Yeah, if BtL does one that goes to youtube I'll post it for those not getting it about this company
Click to expand...

For those ASM members who don't follow Between the lines, I can highly recommend the 10 bucks a month it costs to Patreon to get access to his weekly Vlogs on the PM sector.
I have earned/saved at least 100 years worth of subscription over the past few months.
Mick

Kinda surprised that SSR fell today after gold went up overnight.
Most other gold producers in OZ did.
Perhaps because the with the fall in the AUD, the price in AUD went up more.
But then again, most OZ producers are to varying degrees, hedged, so may not always get the advantage.
So I took the chance to off load some SLR at a profit and moved it into SSR.
Will see how that goes.