ducati916 said:
What are you missing? How about S&P500 earnings coming in at $225/share. Put a x20 multiplier on that and you have a level of 4500. The market isn't overvalued at all. In fact it is a little undervalued.

What has made the 'difference' are the cyclicals hitting the ball out of the park.

Of course cyclicals infers that at some point, earnings will fall. But atm, we are undervalued. Get ready for the summer rip higher.

Ok, and happy with that;
but isn't volatility also/first supposed to show market volatility, and regardless if we are still in bull mode or not, market volatility is high it seems with yoyo actions in the last quarter or so, so my puzzlement; so is volatility an indicator of market volatility anymore or just a guide to investor anxiety
Nevertheless interesting stat, not that I see PE of 20 as the base more PE 17 to 18 which would bring a right S/P of around 3850 vs current 4200.
So we are extended..but not by much and I agree we are in abnormal time and endless QE should results in higher PE so yes no issue with 4500 or even PE of 22 or SP500 near 5000..so yes we could see big growth in the coming months

End of the week and pretty much the end of the month.

It was a historic week for the oil industry, potentially marking a turning point, at least for the corporate strategies of the oil majors. More curbs on the supply side do add some bullish sentiment to the market, although the impacts on the fundamentals are not necessarily going to unfold in the near term. But in the wake of the huge blows to the oil majors this week, more than a few analysts spoke about growing odds of a supply crunch in the years ahead.

Shell loses in court. Royal Dutch Shell (NYSE: RDS.A) lost a landmark legal case in a Dutch court, which, if it stands, will require 45% cuts in GHG emissions by 2030. The case is seen as a warning sign for the rest of the oil industry, signaling legal exposure to Scope 3 emissions (those burned by end-users). More litigation related to emissions is likely.

Exxon loses board vote. Engine No. 1 won votes for two if its candidates in a stunning blow to ExxonMobil (NYSE: XOM). The win is being viewed as a shocking and powerful statement by shareholders as to their displeasure with the oil giant for not doing enough to mitigate the effects of its business on the climate. And For Exxon, it could mean big changes are coming.

Court ruling could shrink Shell. The court ruling ordering Shell to speed up its plans to cut greenhouse gas emissions could lead to a 12% decline in the company's energy output, including a sharp drop in oil and gas sales, according to Reuters.

Exxon must cut production, Engine No. 1 says. Engine No. 1 said that ExxonMobil (NYSE: XOM) must cut oil production. “They need to position themselves for success,” Charlie Penner, of Engine No. 1, told the FT. “You would certainly believe that would mean less oil and gas production going forward.” The hedge fund’s founder, Chris James, added: “Watching that meeting yesterday was such a perfect example of how they don’t realize the world has changed. It was all on display.”

Chevron shareholders vote for Scope 3. Chevron (NYSE: CVX) also lost a notable shareholder vote, with a measure requiring a target to reduce Scope 3 emissions passed by more than 60% of shareholders, another major rebuke to the oil industry.

Oil rises after boardroom brawls. Oil prices rose early on Friday for a sixth consecutive day and were on track for weekly and monthly gains after the defeats on climate policies that major oil firms suffered at the hands of shareholders and judges.

Total to see investor pressure. On the heels of the string of losses suffered by Exxon, Chevron, and Shell, France’s Total (NYSE: TOT) is facing growing scrutiny from investors over its corporate strategy.

Biden defends Alaska oil project. President Biden’s administration has backed the Willow oil project in Alaska in a new filing by the Department of Justice.

Commodity boom driven by speculation. A Bloomberg analysis argues that the spectacular rise in commodity prices in recent months is not the result of demand outstripping supply, but mainly the result of increased risk appetite – i.e. speculative financial flows into commodities.

Tellurian signs a 10-year deal with Gunvor. In a major achievement towards a new LNG project, Tellurian (NASDAQ: TELL) inked a 10-year deal for 3 mtpa of LNG with Guvnor, linked to JKM and TTF prices. The deal could bolster a push towards an FID on the Driftwood LNG project on the U.S. Gulf Coast.

Heat to test U.S. grid. The risk of grid blackouts to multiple regions in the U.S. is rising this summer, with 40% of the U.S. population now living in areas at risk, according to the North American Electric Reliability Corporation. This is the first time that NERC included parts of New England and the Midwest in this threat assessment.

Moody’s: Credit risks growing for Big Oil. This week’s climate-related actions in boardrooms and courtrooms involving some of the largest international oil companies signal a rising threat to the sector, Moody’s Investor Service said in a comment on the industry. “A new court ruling against Royal Dutch Shell and shareholder votes at ExxonMobil and Chevron highlights the increasing credit risk for major oil producers over concerns about climate change,” Moody’s said.

Oil region to become hydrogen hub? The largest oil producers in the Arab Gulf have jumped on the hydrogen bandwagon — especially its so-called green variety produced from water electrolysis using electricity from solar or wind — as it gains momentum with governments and the world’s largest international oil companies.

Biden unveils Pacific offshore wind push. The Biden administration announced a decision to open off blocks in offshore California for wind development. Deep waters have made development more difficult, as well as opposition from the U.S. military.

DHS to propose regulations for pipelines. The U.S. Department of Homeland Security is preparing regulations on cybersecurity for oil and gas pipelines, a move that could beef up security in the wake of the Colonial outage. 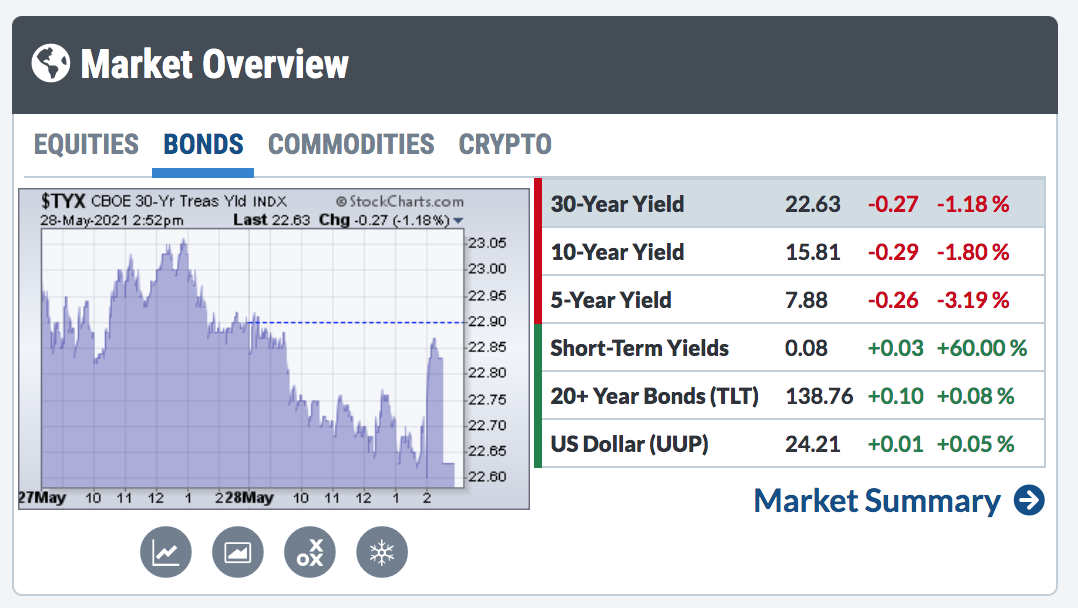 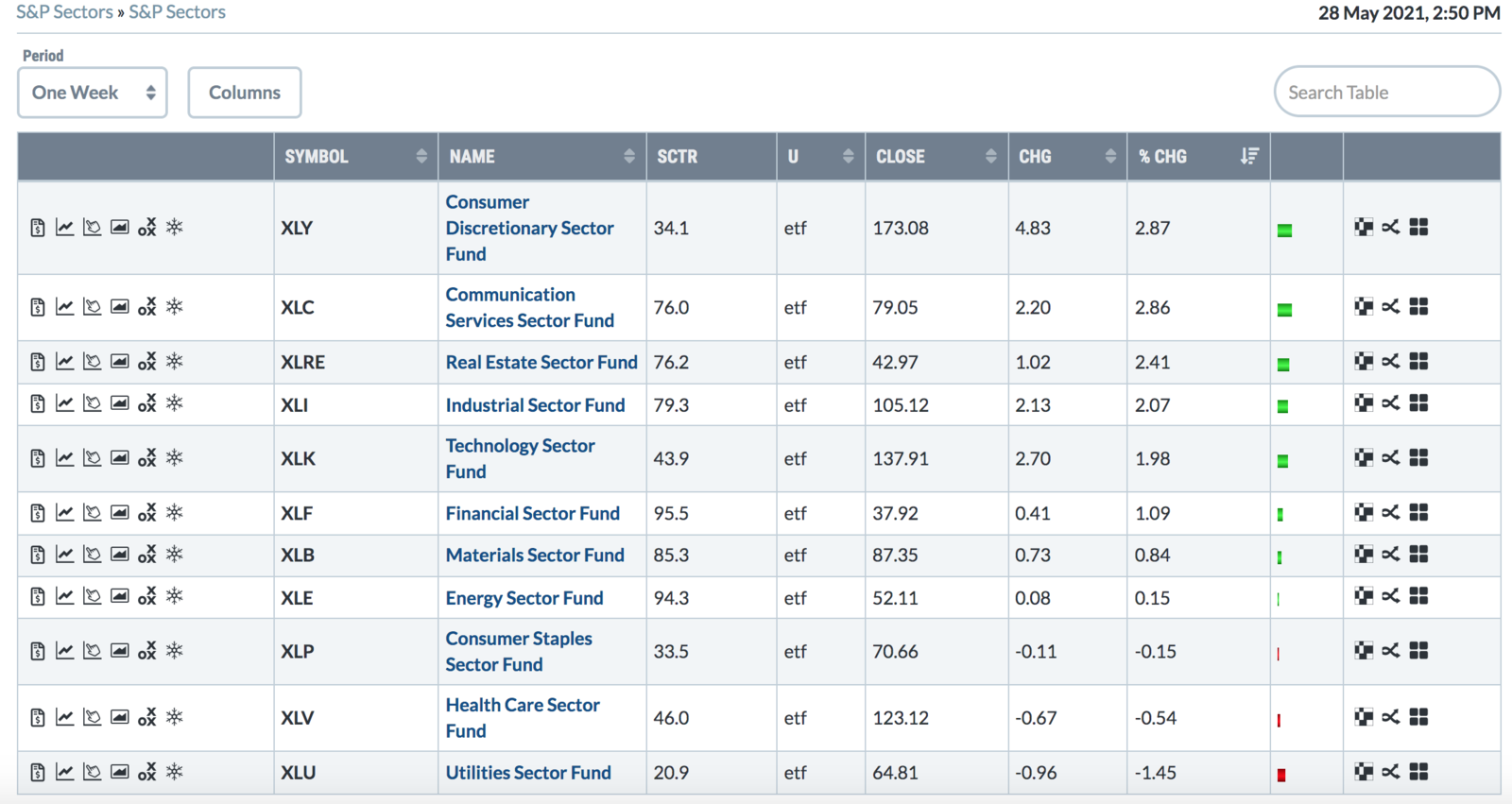 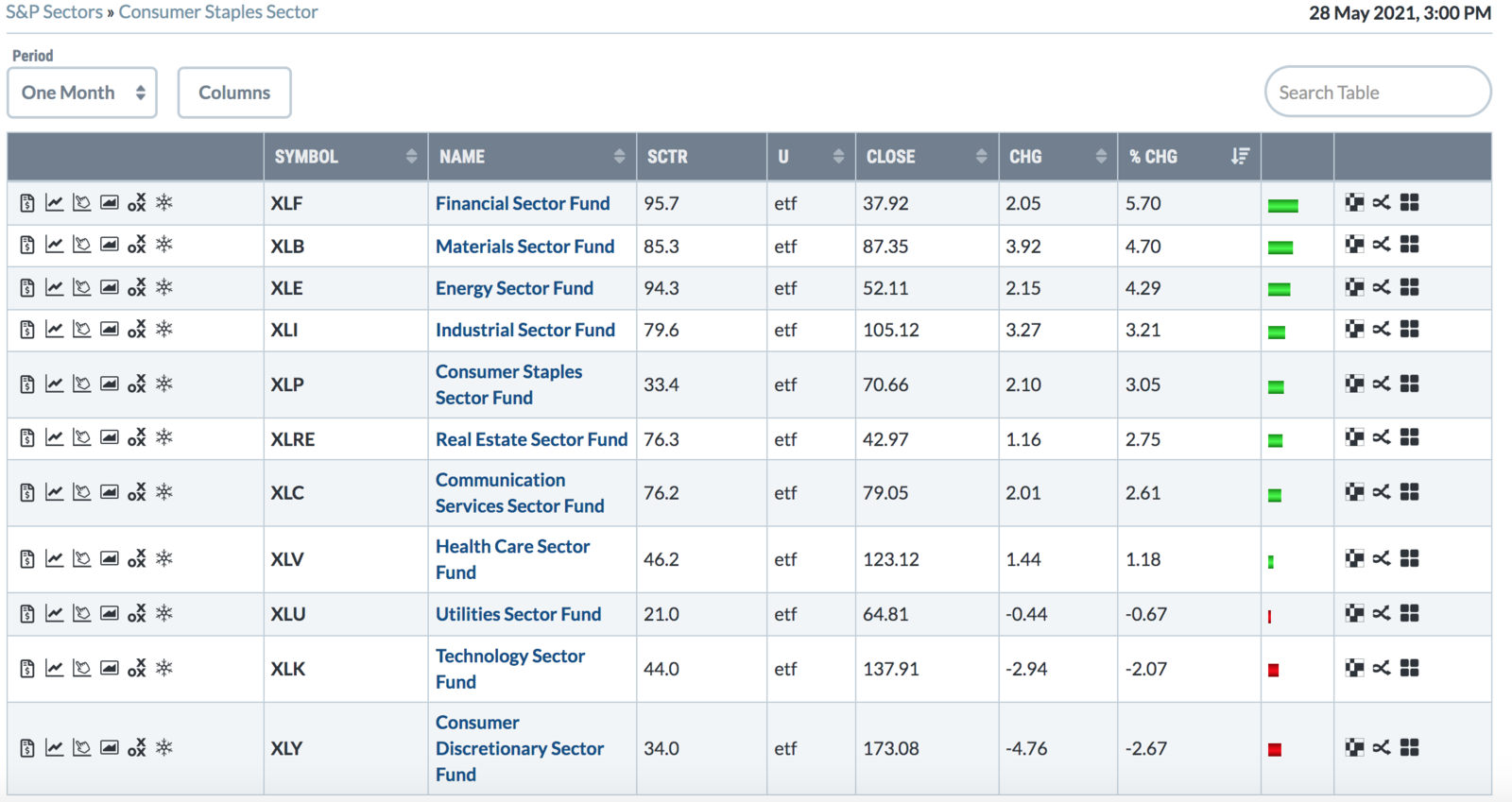 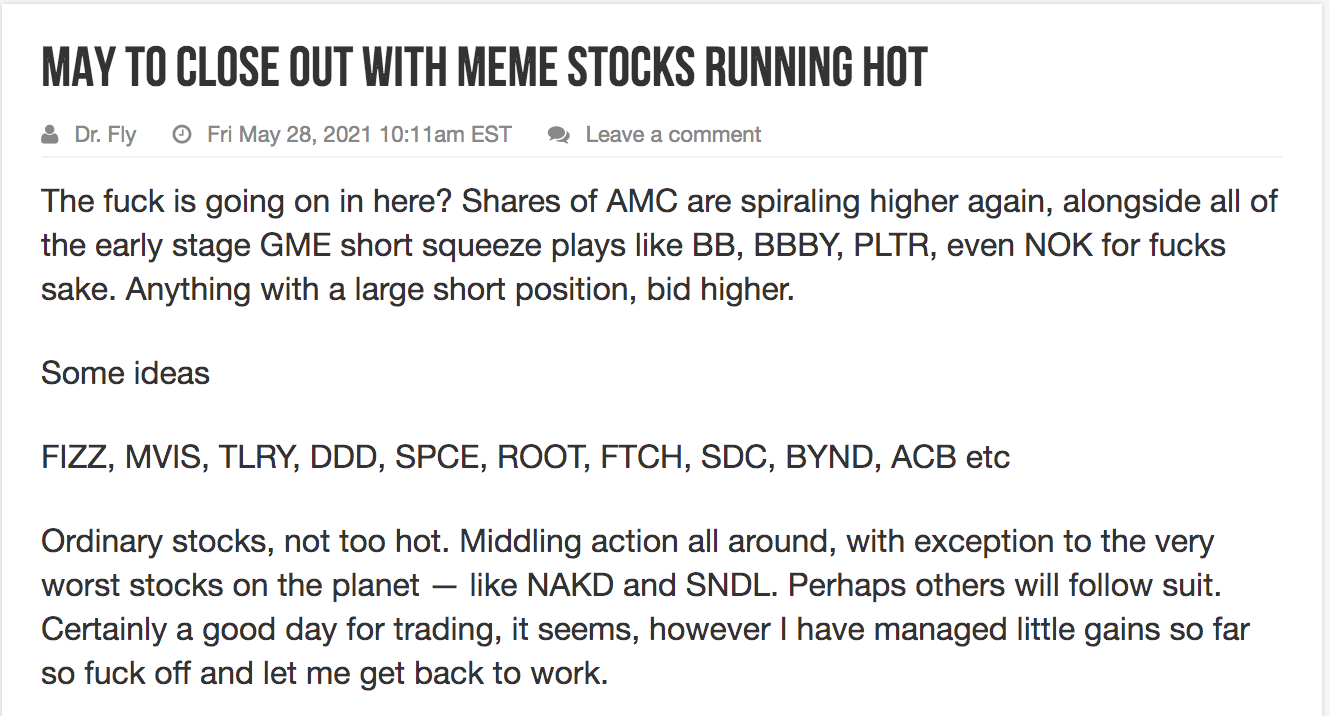 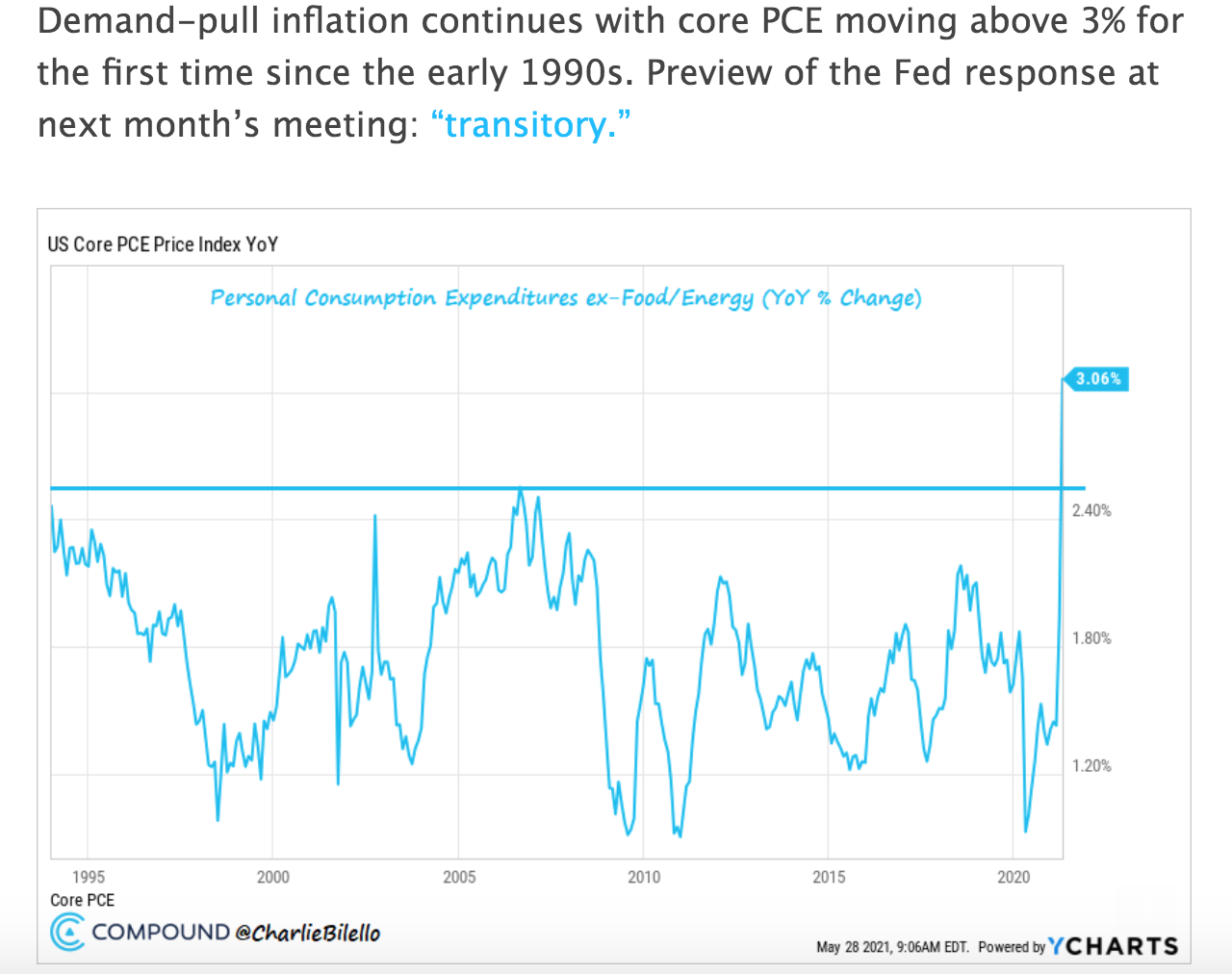 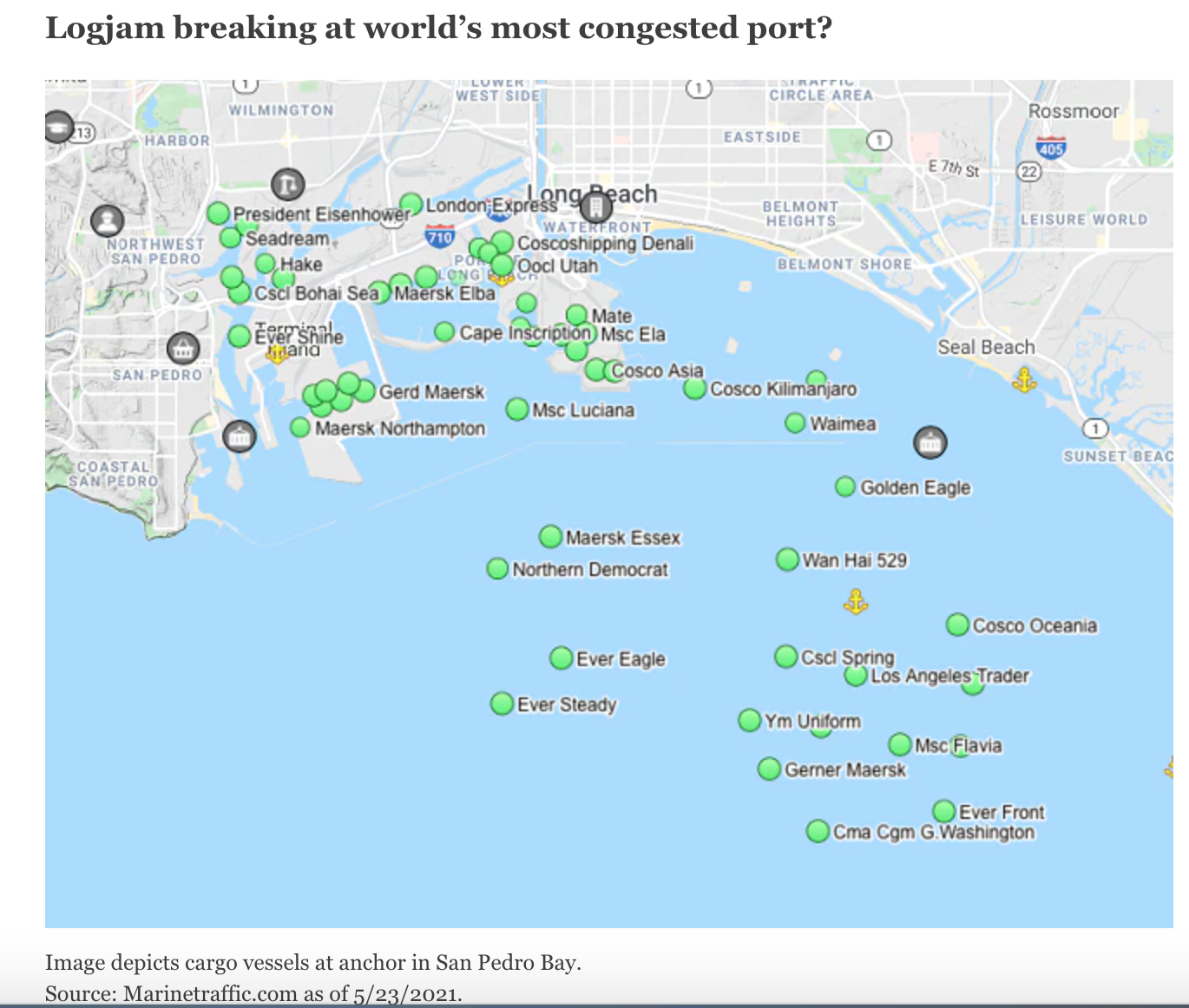 Much more on inflation to come.

The earnings from the Big 4.

From the Wall St. Journal: 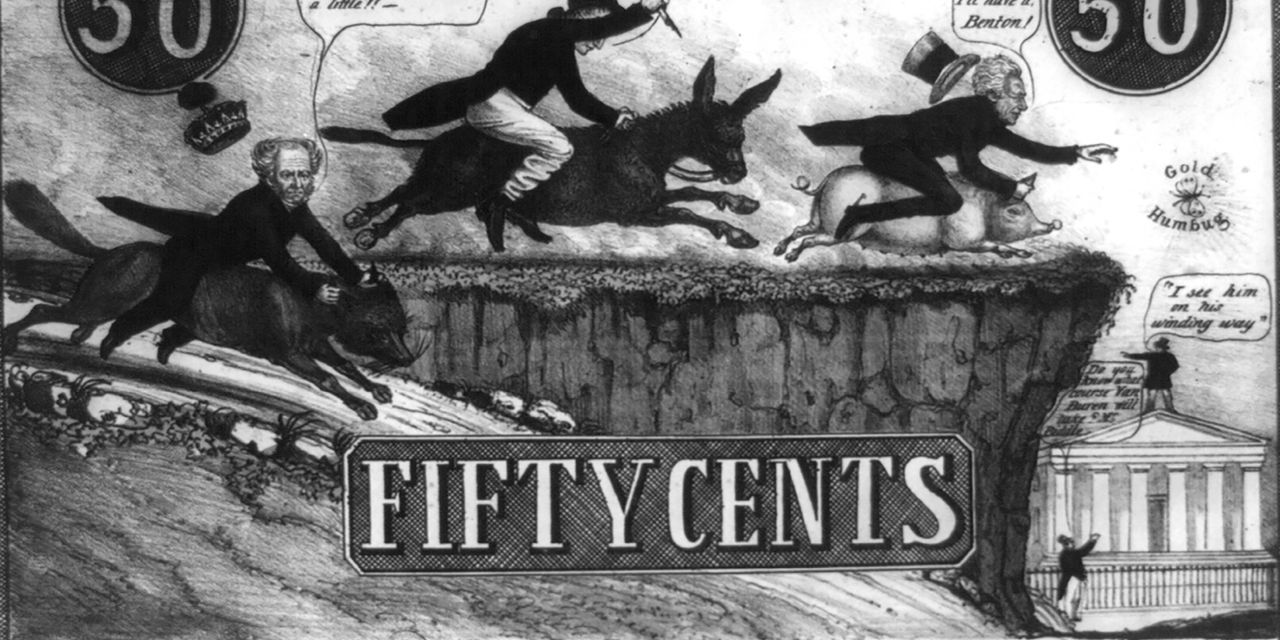 To understand the weakness of stablecoins such as Tether, it is worth a quick history lesson from pre-Civil War American finance.

Closing out May as Monday is Memorial Day and US markets are closed. 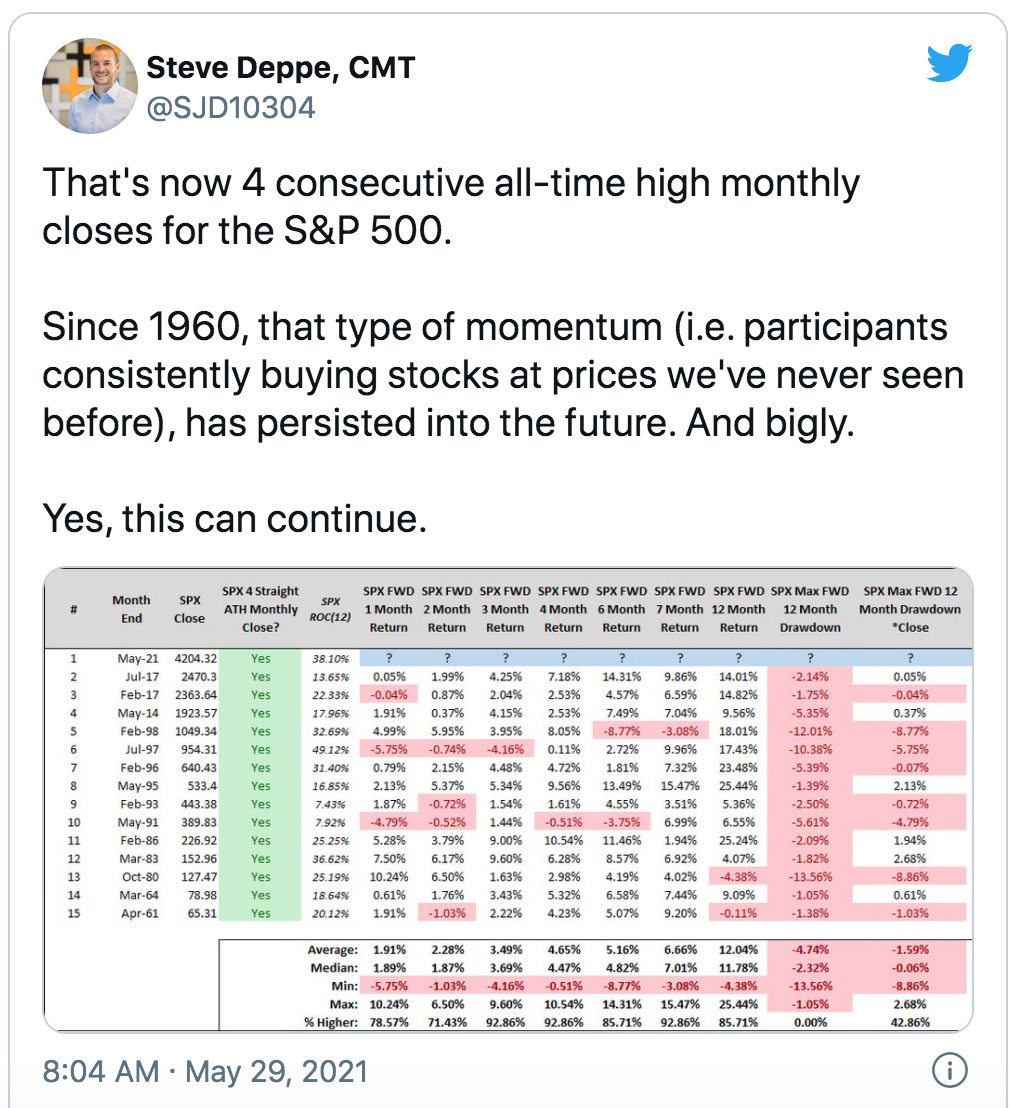 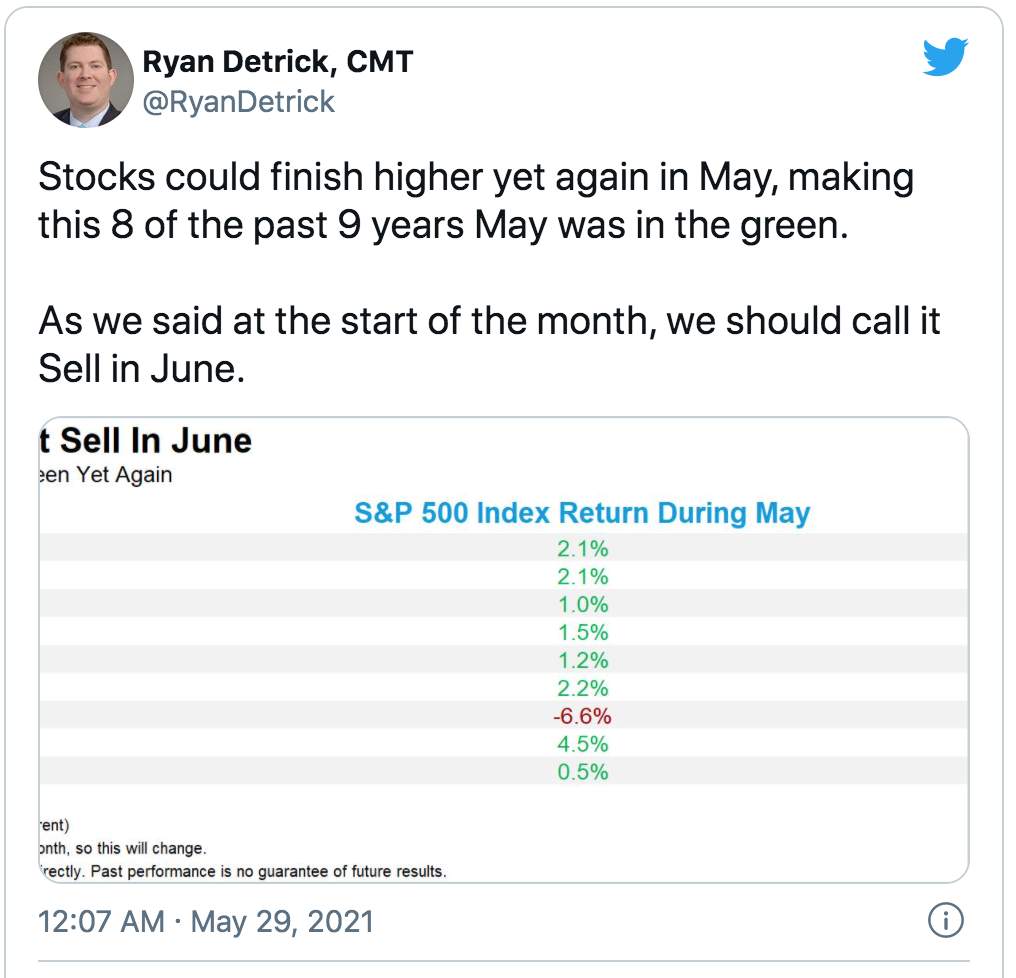 Forget selling in June. June is shaping up to be very bullish. More on that later.

VIX looks on my weekly chart to be headed strongly lower. 1 of the reasons I'm very bullish for June. I worry more about VIX when stocks are toppy and VIX is very low or has been indicating a strong consolidation or breaking out from that base. Not the case currently. VIX looks to be heading into the teens. 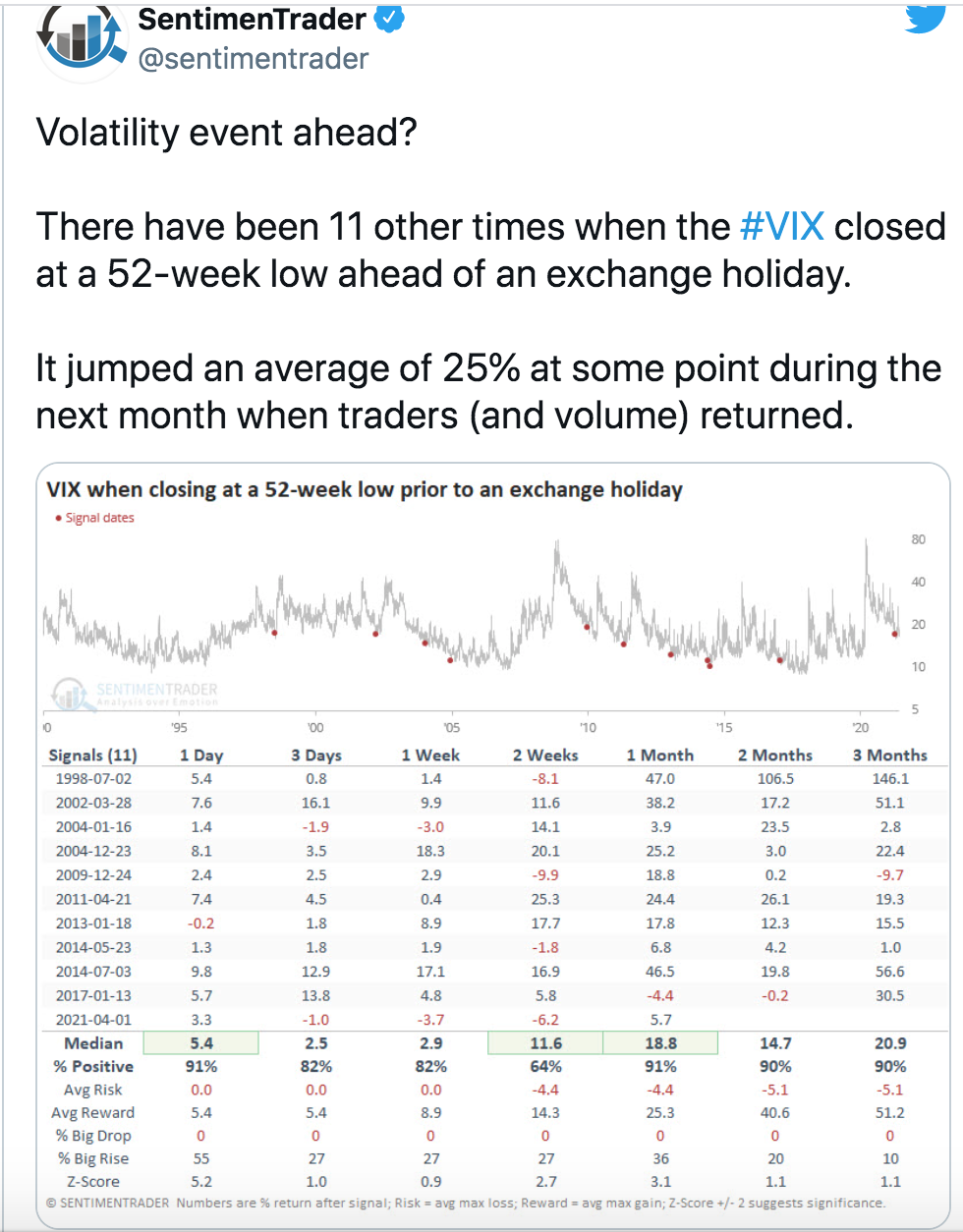 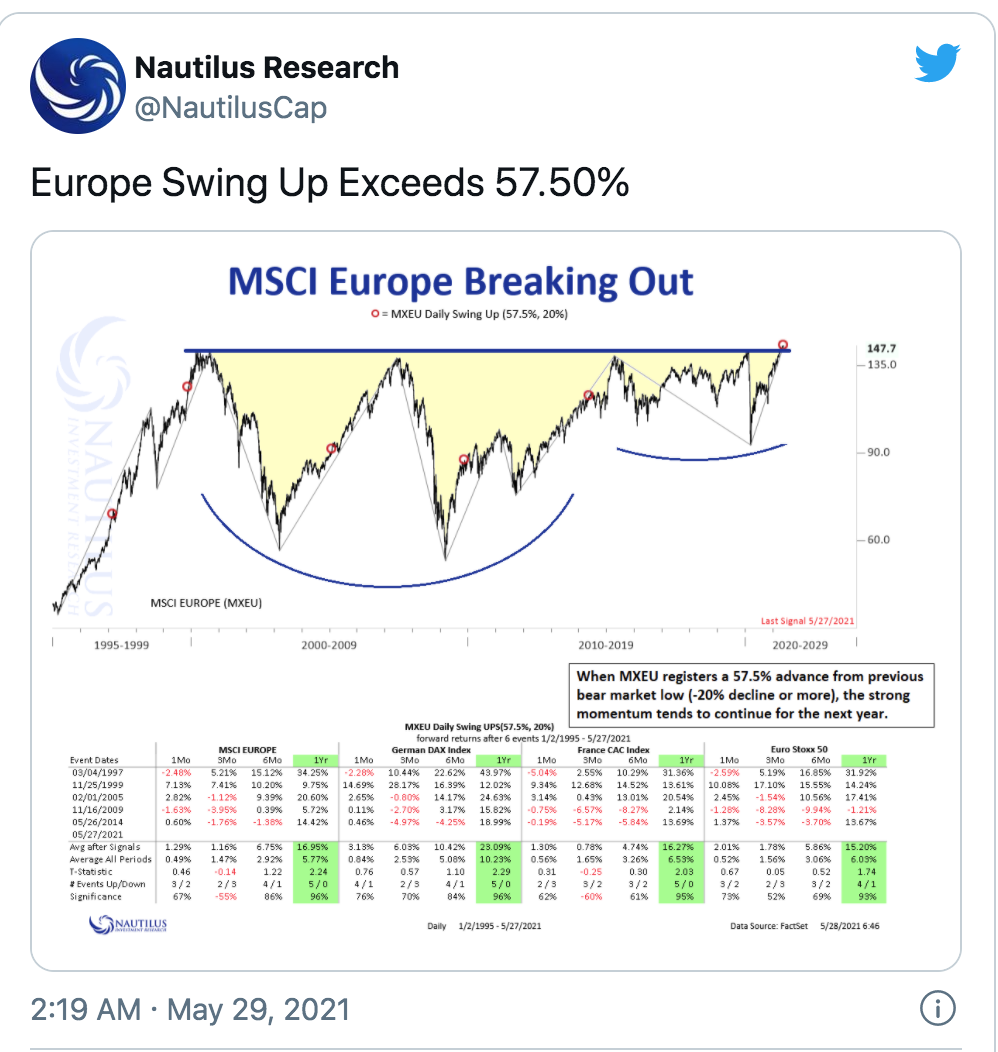 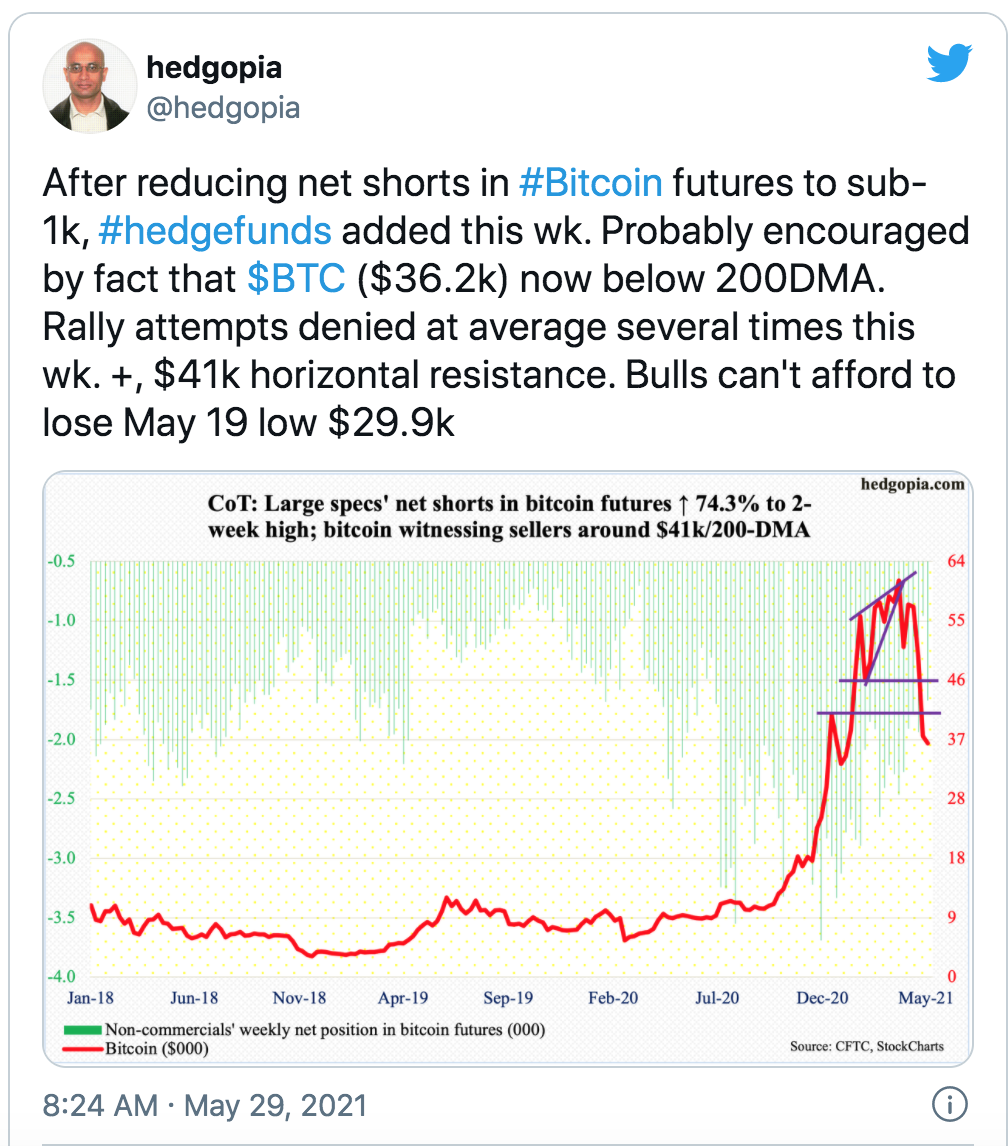 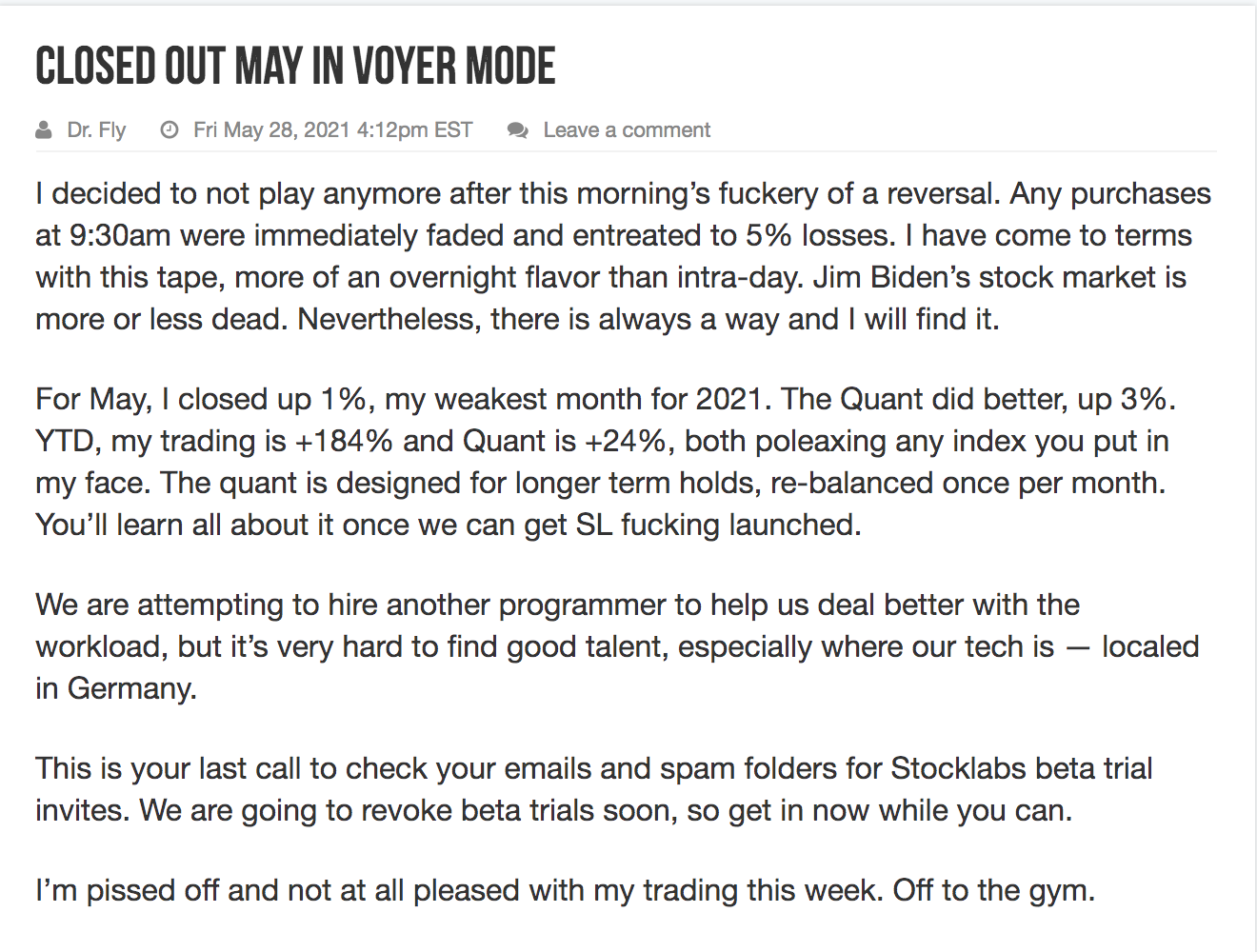 Breadth is solid once again. 74% takes us higher. All indices, SPY, DIA, QQQ, SLY, MDY are bullish on the weekly. MDY is the last to move. In SPY 11 out of 11 sectors are bullish. XLE & XLB have a little work to do and might lag a little.

Bullish. Break through the down trend line (not drawn). 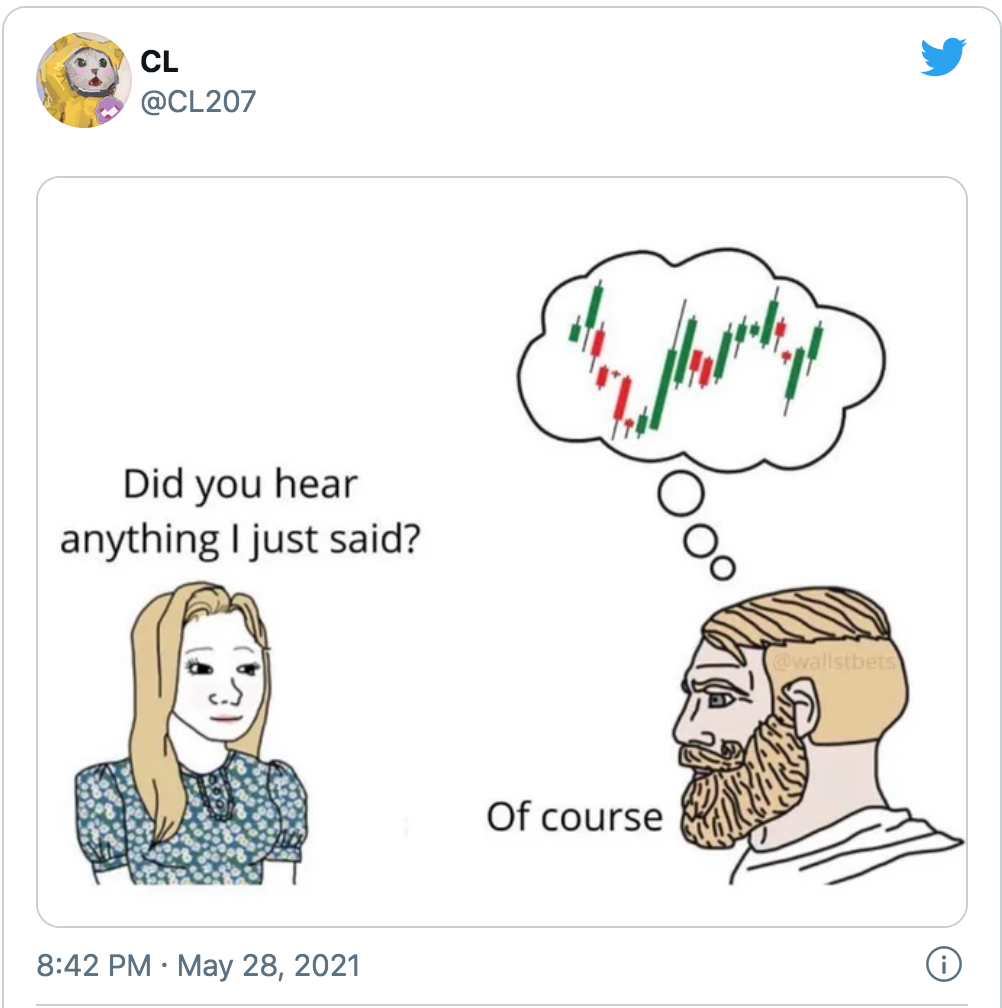 ducati916 said:
Closing out May as Monday is Memorial Day and US markets are closed.

Forget selling in June. June is shaping up to be very bullish. More on that later.

VIX looks on my weekly chart to be headed strongly lower. 1 of the reasons I'm very bullish for June. I worry more about VIX when stocks are toppy and VIX is very low or has been indicating a strong consolidation or breaking out from that base. Not the case currently. VIX looks to be heading into the teens.

Breadth is solid once again. 74% takes us higher. All indices, SPY, DIA, QQQ, SLY, MDY are bullish on the weekly. MDY is the last to move. In SPY 11 out of 11 sectors are bullish. XLE & XLB have a little work to do and might lag a little.

Bullish. Break through the down trend line (not drawn).

cheers duc
always a pleasure thank for your effort