My ATM Holdings operates in the ATM market. The Company has two business units, MY ATM Pty Ltd, as trustee of The ATM Enterprise Unit Trust (MyATM), which sells ATMs and Aussie ATM's Pty Ltd (Aussie) which deploys ATMs.

Just made an IPO, from 14th January at 20.5c, currently trading at 20c. Now that it's publicly traded I thought I might as well post. Here's the interview on FNN :


Dinipants said:
Just made an IPO, from 14th January at 20.5c, currently trading at 20c. Now that it's publicly traded I thought I might as well post. Here's the interview on FNN :

Now trading at $0.09 !! I wonder if this one is worth keeping a eye on if it can become cash flow positive?


robusta said:
Now trading at $0.09 !! I wonder if this one is worth keeping a eye on if it can become cash flow positive?
Click to expand...

Now at 2.5 cents!
Originally saw this when considering buying some ATMsm and wondered if shares were a better option.
I didnt invest in either, VERY glad I did not pick up shares!
Anyone invested in ATMs?

From 9c to 39c in just 4 months, and if you were brave enough you could of bought way back (12 months ago) when the IWG acquisition was first proposed for around 4c - anyway now IWG have a MC of 230M with half of the MC escrowed till late 2016.


Potential - some people think so.

I was going to post about NET last week when I saw its share price starting to move on Thursday but I didn't end up doing it. In any case, it has continued to head north on Friday and today.

I don't know much about NET but after taking a look at their website and their Investor Update released on 27 March, it appears their main product is a form of networking called a VIN (Virtual Invisible Network). Their website describes it as "a globally patented, award winning network technology that allows organisations to quickly connect sites, devices and staff over the internet through a unique network solution that is generally invisible."

Their focus is now on China and they recently appointed a Chinese Director, a Mr Zhang, in February and they are "ready to expand into new cities and provinces, under Mr Zhang's direction, to sell the VIN product as secure VPN replacement through the China Teleco Catalogue."

The market certainly seemed to like the look of their strategy and action plan as outlined in the Investor Update released last week. They convincingly broke through long standing resistance at 4c on Thursday and are currently trading at 6.2c, up 21.57% from Friday's close of 5.1c.

Netlinkz looks like it's found support at 8c, having bounced off that level a couple of time in the last month.

Recently, Director James Tsiolis has been topping up his holdings. Four separate Change of Director's Interest Notice announcements have been released since the start of May detailing the on-market purchase of a total of 315,000 shares.

The Investor Update released on 18 April provided further details about their China plans as well as their plans for the USA. Details of short term funding were also mentioned.

The NET share price is currently up 8.05% to 9.4c today, having reached an intraday high of 10.5c. It looks like it's in the midst of its next swing up off support at 8c.

NET continuing to go great guns. After about a month of consolidation between 8c and 10c it finally broke through that level and has stayed above it since.

On Wednesday the company announced that it has received cash proceeds of AUD$160,000 for the sale of VINs as a VPN replacement product from its pilot program with China Telecom Wuxi for the period October 2018 to March 2019 from its China reseller based in Hong Kong and its China based agent JASTVIN.

Management has confirmed that the sales of the VPN replacement product through JASTVIN will now continue through 51 cities in China.

NET share price is up from 12c to a high of 17c in the last three trading sessions. It will be interesting to see what the next set of revenue figures looks like. 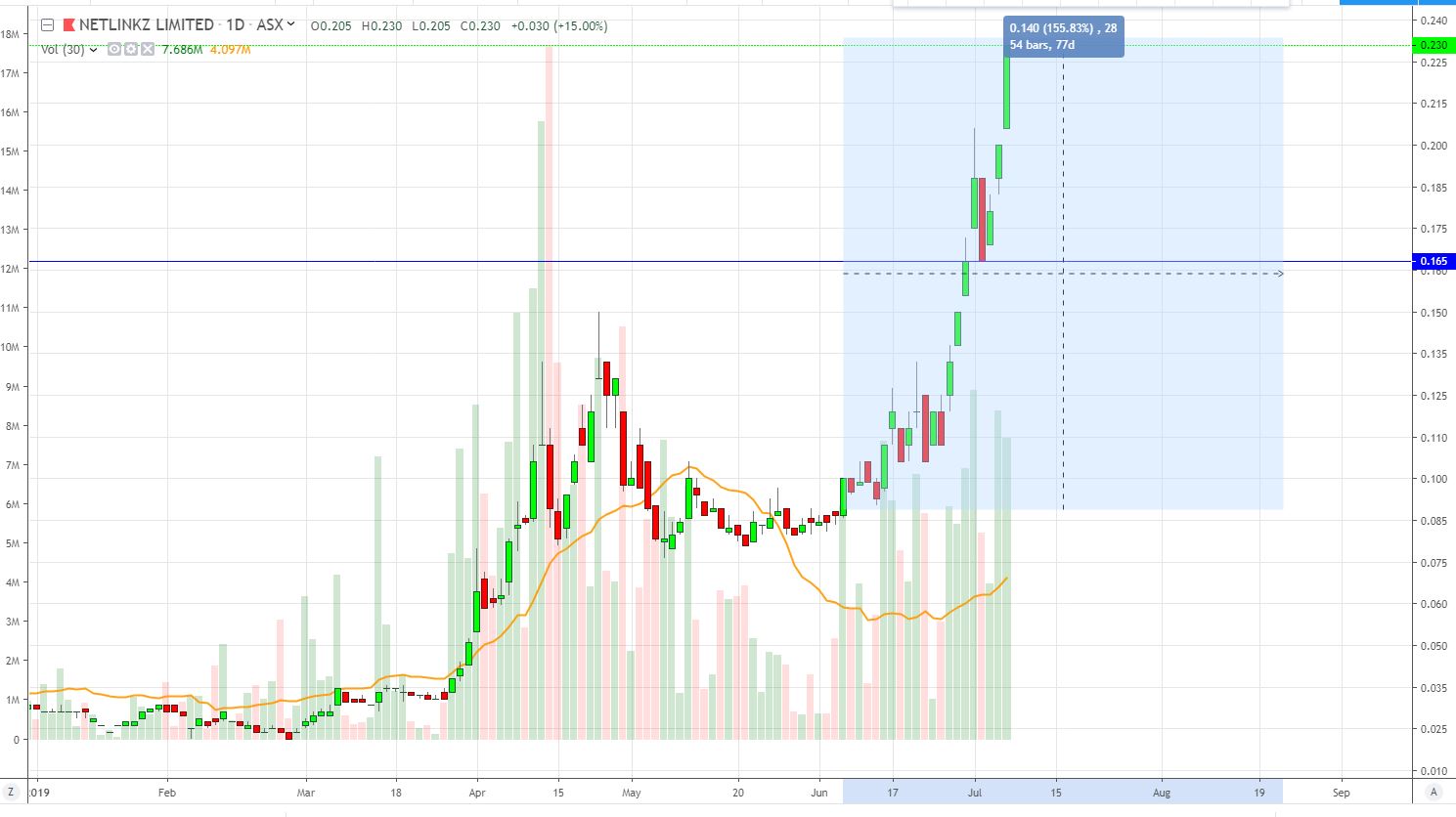 NET up another 9.4% to 29c today after announcing it has signed an MOU with iSoftStone Information Technology (Group) Co. Ltd (ISS) to establish a joint venture company in China to distribute and sell products developed from the Beijing IoT Lab.

Surely NET's going to have to take a breather soon. It was just over 3c only four months ago!

greggles said:
. It was just over 3c only four months ago!
Click to expand...

Wow! ….. I missed your call on this one Greg. Well spotted.

10 bagger in 4 months. It must be somebodies shout!!
J

@tech/a or @peter2 when this settles, would you do a commentary on how either of you would have traded this with an entry on the 4th July?

As mentioned before, I stay away from huge gap ups as I cant stomach > 10% risk per trade. I know appropriate position sizing takes some of the risk away but it a mind game I am trying to conquer. Any bit of educating helps.

Have a little position in this myself 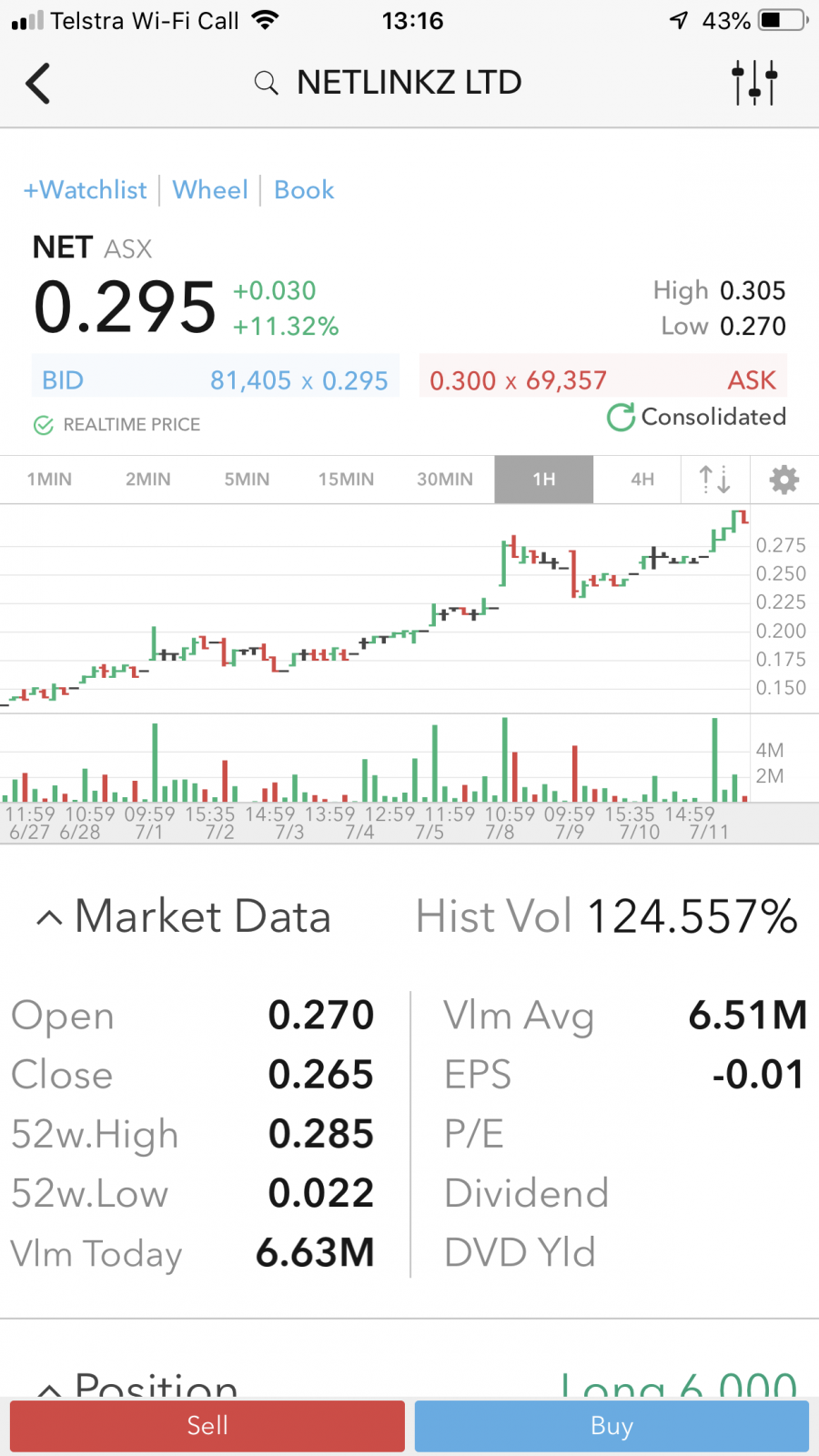 just_jay said:
@tech/a or @peter2 when this settles, would you do a commentary on how either of you would have traded this with an entry on the 4th July?
Click to expand...

NET came to my attention when it traded above 0.10. I liked the shallow sideways consolidation on low volume after the prior run up. I didn't trade this because I don't trade companies with their whole business located in China (or Israeli based companies). A chart like this shows me how silly this bias is. I'm working on it.
My setups are labeled 1,2,3.
#1 is the BO of the consolidation at 0.105.
#2 is BO-NH at 0.14.
#3 is BO-NH at 0.21

Your entry on 4th July is similar to my #3. If I bought here I would know that this entry into the trend is late and price momentum is nearer to the end. The R:R of this trade is worse than #1, #2.

It's important to know why you bought this stock. Are you trading it for a quick gain or are you intending to be a longer term holder hoping for a huge profit? This is very important because this dictates how you should manage the trade.

Personally I trade for both quick and medium term gains. Buying at #3 I would be hoping for a quick gain because I'm late. At 0.30 my trade would be past +2R and I would protect this gain with a very tight exit stop. I'll let price go higher but if it starts to fall I'd sell at 0.28 to grab a quick +2R result.

If I'd bought at #1 or #2 then I'm able to let price move around a lot more and see if there's more to this weekly trend. I hope this helps you form your own trading plans. @just_jay
J

peter2 said:
It's important to know why you bought this stock. Are you trading it for a quick gain or are you intending to be a longer term holder hoping for a huge profit? This is very important because this dictates how you should manage the trade.
Click to expand...

Thank you Peter for your analysis. I don't own the stock. It came across my radar on the 4th of July (volume traded) and I just stuck it in my watchlist because the support levels were too far away for my comfort. I hold my stocks short term and aim for a 1R to 1.5R. I never get over 2R because I am prone to taking my profits early, but I am working on refining my exit strategy.

tech/a said:
Have a little position in this myself
Click to expand...

Shouldn't you be doing paperwork or quotes or something..

Doing heaps of that mate
Known as the quote machine!
K

has anyone reviewed the recent annual general meeting video recording?