Croydon-Homeward Bound
•Company in final stages of negotiations surrounding access and compensation, drilling to commence ASAP.
•Mapping and sampling completed during 2011 identified 147 old shafts, adits, and drives.
•Surface and dump samples from the northern end of the Homeward Bound (see photo) completed. Only samples in excess of 10.0 g/t Au plotted.
•CNS applied for a ML over this area in May 2011, possible grant in Q3 2012.
•Core and RC drilling program aimed at confirming historic grades, structure, and deeper sulphide ore zones.
•Possible second and third reef at depth, not tested.

Spiral
•Previous BLEG surveys by Shell Minerals, located anomalous gold in the stream sediment samples in creeks draining the hills in the north-west of the tenement.
•Image (right) of the Spiral tenement shows the uranium anomaly (red and yellow zones) to the north of the Bethungra Caldera.
•Caldera is defined by the black line, the out rim of the magnetic response. Superimposed on the image are the rock chip geochemical sample locations, the red and gold stars correlating with the high yttrium.
•These sample locations are being investigated as a possible rare earth element occurrence.

Gympie
•Aeromagnetic and radiometric survey completed.
•Test area to the SE of Gympie, over known Devex Dyke, showed a coincident magnetic response.
•Similar magnetic response interpreted in newly acquired data under the South Curra Limestone (blue hatched on map). This is the Dugdale target.
•Queensland Government requested a voluntary abandonment of 14/15 of the tenement, as a result of political pressure from CSG activity.
•MMI program planned to test the magnetic anomalies in the South Curra Limestone.

Turon
•Review of the open file reports over the Turon tenement identified a 1530 g/t Au rock chip sample taken from the Dead Horse workings.
•Geochemical samples confirmed an anomalous gold response over this portion of the reef.
•Centius is currently drilling a 20 hole FHRC program along a 500 m section of the reef (see photograph).
•Results from drilling program available during the next 30 days.
•BLEG geochemical sampling program completed over the entire tenement

Copeland
•Preliminary assessment of the open file reports, plus previous production data allowed for a 50% reduction in the size of the tenement.
•Recent reconnaissance mapping and sampling suggested difficulty accessing ground.
•Airborne survey likely create excellent geo-scientific base on which to build exploration program.
•Once tenement has been flown, data will be interpreted and preliminary follow up sampling completed.
•Centius to decide whether to JV the tenement or continue the mapping and sampling program.

Junee
•Tenement flown with detail magnetic and radiometric survey.
•MMI soil geochemical program completed over the northern magnetic anomaly (red zone in adjacent image).
•Regional copper high recorded over the eastern part of the magnetic anomaly.
•Interpreted pull apart structure north of Allies Mine still to be investigated.
•Extension of Green Hill mineralisation on the Ilabo block to the east was sampled.
•Anomalous samples have been collected and these are currently being followed up.

La-de-da
•Centius applied for the La-de-da lease EPM19340 (see attached image) to the east and north of Dittmer, Qld.
•Main target in the tenement is a horse-shoe shaped range of hills to the SE of Dittmer, which had a coincident circular magnetic anomaly.
•This included one of the few gold-copper deposits in the area.
•Centius interpreted the circular feature as a possible collapsed caldera.

Temora
Limited access to the tenement and the major portion being covered by Temora township, the decision was made not to reapply for the tenement, which was relinquished in January 2012.

Directors
•Scott Brown, B. Bus, M. Com – Scott has an extensive background in finance and the management of public companies. He is currently CEO of Real Energy and formerly CFO of Mosaic Oil. Scott was previously a director of Objective Corporation and an Executive with Allegiance Mining and Turnbull & Partners. He has also previously worked for Ernst Young and KMPG.
•John Slade, B. Sc (Hon) M. Sc, Member AusIMM – John has 40 years experience in mineral exploration in 18 countries with companies such as BHP Billiton, MIM and CRA . He was also involved in the discovery of Que River Mine.
•Robert McLennan, B. Sc, M. Sc, Fellow AusIMM – Robert has 40 years experience as a geologist with a strong track record for mineral discovery. He has worked for Conzinc Rio Tinto Australia Exploration, Mount Isa Mines and Walker Corporation, and was the founder of Robust Resources, Augur Resources, Pacific Island Gold, Range Resources, Dome Resources and Magma Mines.
•Mr Tiong Chiong Ee – B. Art,s B.Com – Tiong is an Executive Director of RH Mining Resources Ltd and RH Petrogas Limited.
•John Robson – B. Arts (Econ) - John is Managing Director with Ivory Capital Asia. Prior to joining Ivory, John Managing Director in the Capital Markets Groups at JP Morgan and Merrill Lynch in Asia.

I bought some last week, in anticipation of a Darvas breakout.
Still highly speculative, especially given the history of band wagon hops.
Could be either 3rd time lucky, or Dot-Com deja vue all over again.

pixel said:
I bought some last week, in anticipation of a Darvas breakout.
Still highly speculative, especially given the history of band wagon hops.
Could be either 3rd time lucky, or Dot-Com deja vue all over again.
Click to expand...

I usually avoid trading stocks like these... you know this is the eventual chart pattern, so it's very hard to go long with confidence.

Flying selfie stick... this had a market cap almost $100m at one stage
E

Unfortunately it will settle at 2.5 cents whilst traders are playing with it

El Pedrino said:
Unfortunately it will settle at 2.5 cents whilst traders are playing with it
Click to expand...

You were right, even a tad optimistic: Twice it tested 2.1, and twice that level held.
That was followed by break and test of 3.1c, which I now see as new support.

no news, but pre-open has lots of bids above 4c and a 2M IAP of 3.9
(coming back down now - monitoring volatility)
I hold

3.8c seems to hold as current resistance. Volume dropped off slightly, but still well above recent averages. Has anyone heard/read any news? Or did their super drones fly away with the secret? 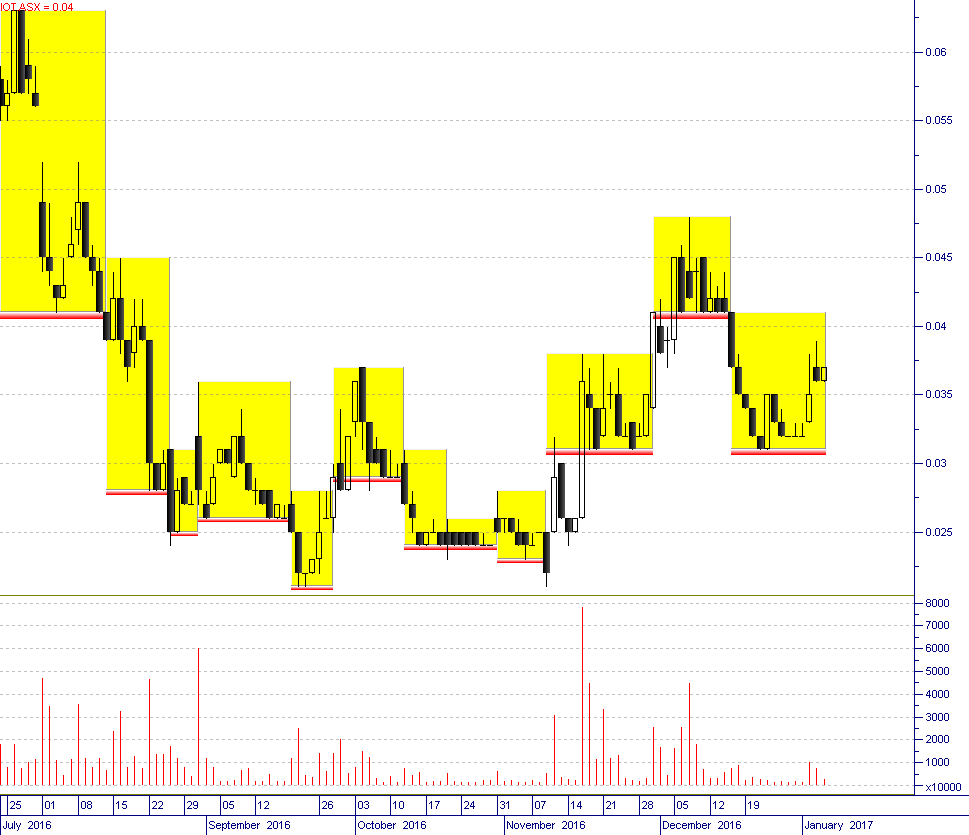 Trading Halt in anticipation of a potential deal in North America.
Some people may have "anticipated" something because the trend was up over recent days. I followed the chart and accumulated. Took some profit at the obvious resistance today though. Tuesday will tell whether I've cut some profit or should've sold the lot.

News is out: During tirst 90 days (March to May) the Flying Selfie ROVA will be sold exclusively by Amazon.com. That could limit the appeal, or, if successful, lead to a scramble from other major retailers. Time will tell.

Initial exuberance is met by a Reality Check. The proof will be in today's Close. 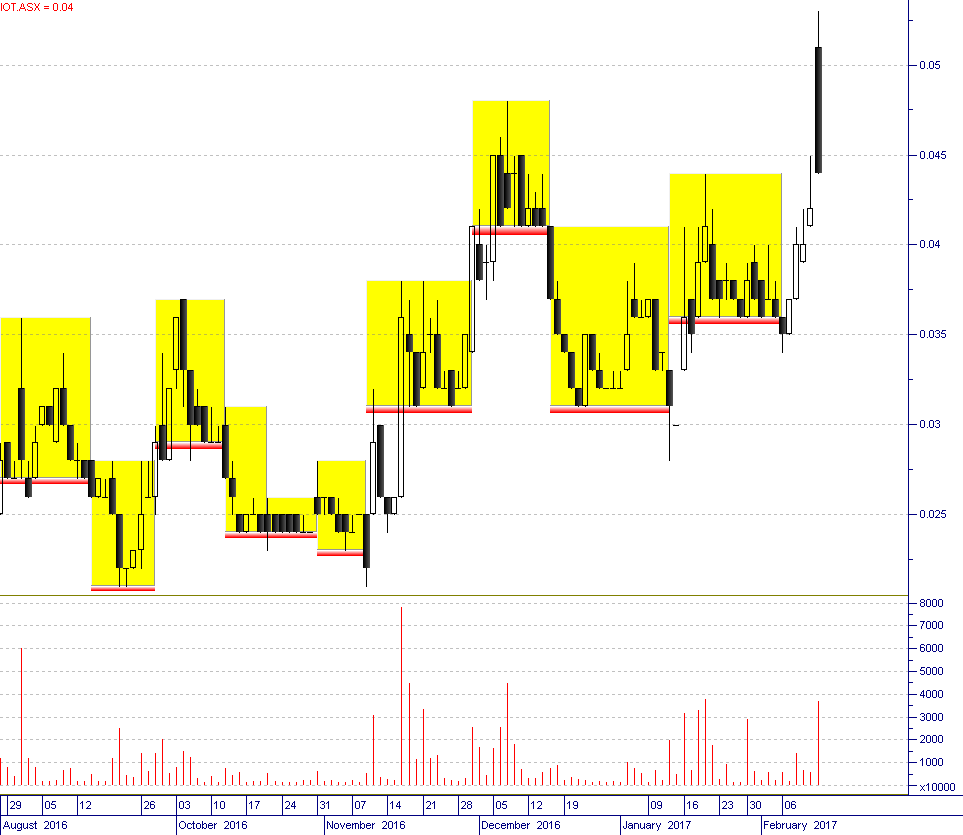 I've traded some and intend to hold one lt position into March.

Can anyone make sense of all these resolutions and explain what's going on with Kantor?
http://www.asx.com.au/asx/statistics/displayAnnouncement.do?display=pdf&idsId=01829880

OK, so I'm happy that the chart suggests a recovery and change of trend. Who wouldn't appreciate a profit. But it would be interesting to get a quick summary from behind the scenes in addition to the obvious "Amazon will sell our flying selfie stick". 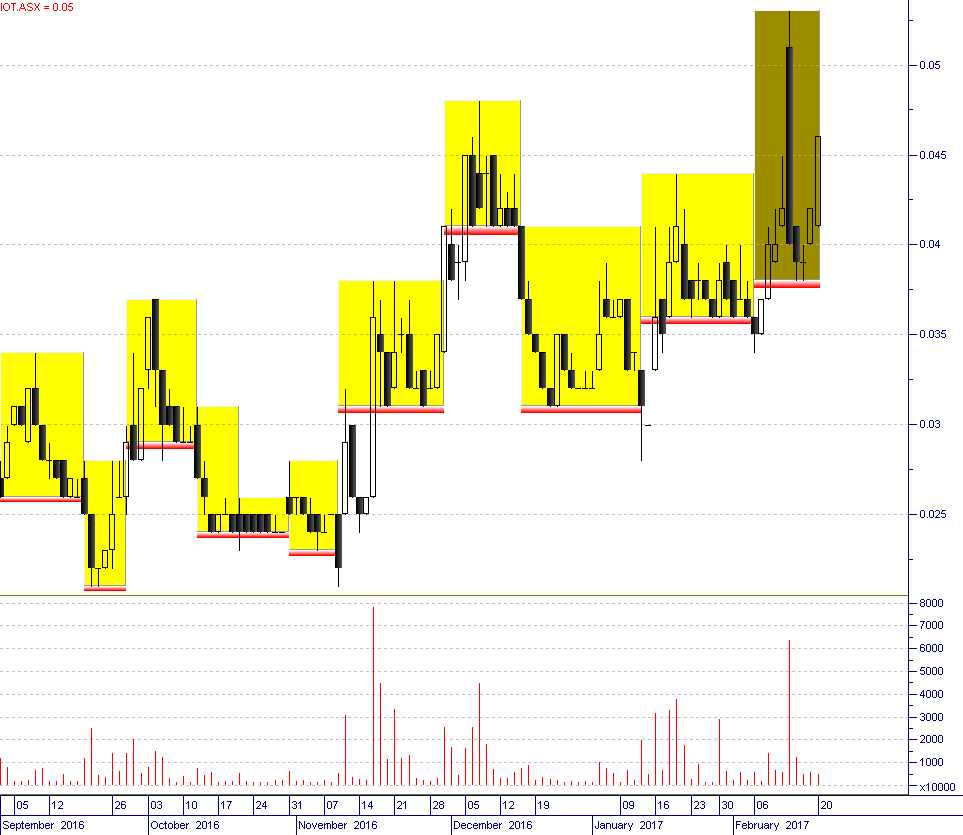 It was "expected" on the 14th that ROVA will become available on Amazon.com by early March.
That is only a few days away now. And the Market is waiting "with bated breath" to read first sales figures. A break through the bottom of our rising channel would signal a big flop and get me out of here. Otherwise, I'll hold and possibly accumulate some more. 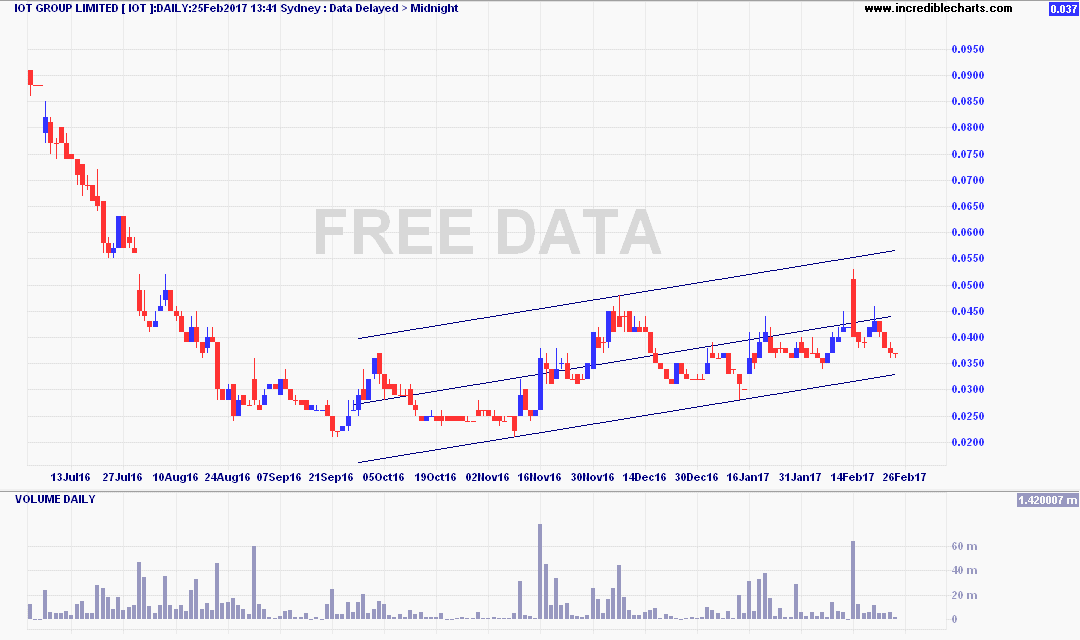 Google "amazon.com rova"
all it gets you is a bunch of cheap music
e.g. from a guy named Shlomo Katz download at 99c

pixel said:
Google "amazon.com rova"
all it gets you is a bunch of cheap music
e.g. from a guy named Shlomo Katz download at 99c
Click to expand...

Or just search flying selfie under Amazon.com and get 102 results... hardly a unique product these days.

skc said:
Or just search flying selfie under Amazon.com and get 102 results... hardly a unique product these days.
Click to expand...

thanks skc,
on eBay, they're called "selfie drones". Search got me 194 offers.
Among them is one "Elfie, the flying selfie"
that costs AUD$61.19
You must log in or register to reply here.