An analysis of these tests has resulted in the identification of extensive iron sand mineralization. As an outcome, the company has lodged 10 exploration license applications with the Guatemala Ministry of Energy and Mines, which has approved an initial 3 exploration licences covering an area of 292.5 sq km. New Reconnaissance Licence applications for 3 areas have been lodged with the Guatemala government for the areas that are not included in the Exploration Licence applications. All of the areas covered by the Reconnaisance Applications and the Exploration Licences are on-shore.

Will have to look more closely at this company as it doesn't look big enough to get this project firmly under-way. Raising $2.5 million only looks like ticking over sort of money to me.
With the Dow plummeting they seem to have mistimed their entry on to the markets.
However, I've only glanced at this stock and I'm probably missing something. Perhaps you know??????????

The company doubled its share price today on huge volume after announcing it had signed Memoranda of Understanding with three leading Chinese battery manufacturers to work towards Supply Off-take Agreements for the supply of lithium from Anson's Paradox Lithium Project.

Anson Resources announced this morning that it is on-track to produce first Lithium Carbonate in April 2018 at its Paradox Lithium Project in Utah, USA.

What a roller coaster ride Anson Resources has been. 4c to 30c, then back to 5c in six months. A classic case of fear and greed running rampant.

The company is developing the Paradox Lithium Project in Utah, USA where they are focused on lithium rich brine. Some encouraging announcements led to a huge price increase but a couple of delays and brine samples needing to be re-assayed have led to big selloffs.

It bounced back on Friday, but with ASN being a day traders favourite this one is just too volatile for my liking.

I have picked ASN for the July tipping comp.
I like the breakout on huge volume after months of consolidation.
The last 3 days trading has largely remained within the control bar, all with decreasing volume.
Today's candle is very small, with very low volume - hopefully this means there is no more supply at this level, and the next move is up. 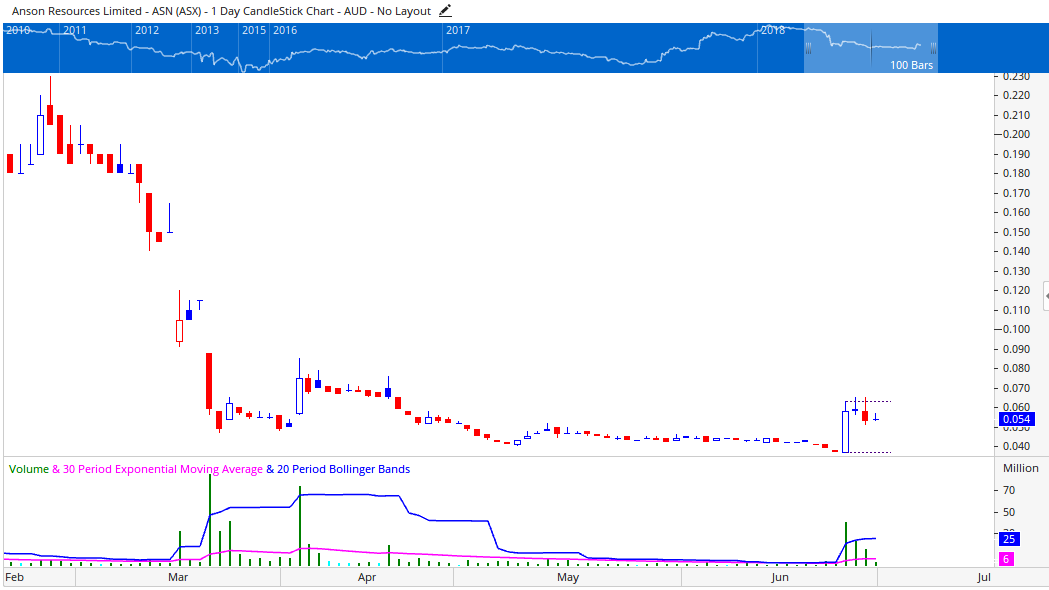 Well spotted myrtie, ASN's next move was up as you predicted. The catalyst appears to be a few positive announcements in the last week relating to evaporation test work carried out on the bulk brine sample extracted from the company's Cane Creek well. Volume is up and sellers are retreating as buyers push the price up.

Am watching ASN with interest.

Thanks guys
And thanks @tech/a for teaching me this style.


myrtie100 said:
I like the breakout on huge volume after months of consolidation.
The last 3 days trading has largely remained within the control bar, all with decreasing volume.
Today's candle is very small, with very low volume -
Click to expand...

All of the above and more that we haven't covered.


greggles said:
Volume is up and sellers are retreating as buyers push the price up.
Click to expand...

Buyers aren't pushing price up.
Supply is not as prevalent and as such buyers have to pay higher prices from sellers who are prepared to sell at that higher price.

Even now there is a very good drink in the trade.

Just in case you were wondering.
The price action of the last couple of days including today
Is very normal and does not change my view.

Just for the point of discussion …. I like the potential of this Stock but the fundamentals indicate a short term run at this point in time ...

If it behaves as I expect, I think the current rise will diminish/stall over the next 2-3 weeks but that will likely be followed with another push higher around early mid August when more definitive results on their recent evaporative testing will be announced

I expect the August results to be positive with another price spike (from the retracement price), but then I expect an extended period of retracement pending further announcements on the longer term production potential … (extended because its time to potential production is still a way off and the market is impulsive and will become "bored")

If the price action follows this pattern, this will be accumulation time for a longer term trade … not everyone's cup of tea, but for me, that is my favourite Spec trade setup

Barney
That is as good a possibility as any
Frankly it’s too early to make any predictions
But we can follow the indications.

I agree that predictions are just that … predictions … and subject to a myriad of possibilities ….

I think this stock is shaping up as a good trade over the next few months …. If it behaves within my expected guidelines it will likely be a very good trade …

If it follows a different path, no doubt traders with a different approach will also make a good trade out of it which why trading is such an interesting process

Going along as Price volume and pattern indicated.

ASN again hit the Top Risers today ….. Its been a good push and it may have a leg or leg and a bit left in it given the trader interest, but …

Given this rise has been off the back of their recent evaporation test results which is still very preliminary, the current traders will likely stand aside at some point (very abruptly I would suggest) and I expect a quick retrace into a trading range …… For anyone that holds, I'm happy to be proven wrong and hope you make a lot of moola

The ASN share price is bumping its head into resistance at 15c. It had some trouble with this level back in November 2017 and didn't stay above it until the end of December.

Might need a catalyst to push it above and beyond.