Southern Crown Resources Ltd (SWR) was formed with the purpose of acquiring, exploring and developing mineral deposits and on 29 July 2010 entered into an agreement with Centaurus Metals (CTM) to acquire The Dish and North East Queensland projects.

Anyone been noticing Yojee Limited? In the last three months it's gone from 7c to 22c. It closed at an all-time high today on solid volume. I haven't been paying any attention to the fundamentals but just based on price it's been a great little performer.


The agreement will govern multiple sites across the region where Yojee will provide its software-as-a-service (SaaS) logistics and supply chain management technology on standard commercial terms on a project-by-project basis, plus applicable setup, subscription, professional service and transaction fees.


It will commence immediately and includes standard enterprise clauses including termination by either party for any reason or no reason on 180 days’ written notice. More...

latest announcement sent it up 40% ?

I have no idea when its even breaks even let alone makes a profit to justify its share price.

YOJ is a cloud-based software as a service (SaaS) logistics platform that seamlessly and uniquely manages, tracks and optimises freight movements along the entire logistics chain.

Yojee has improved its enterprise-level capability following the completion of several platform feature updates. This strengthens Yojee’s position as a leading third-party enterprise software operator in its sector in Asia. 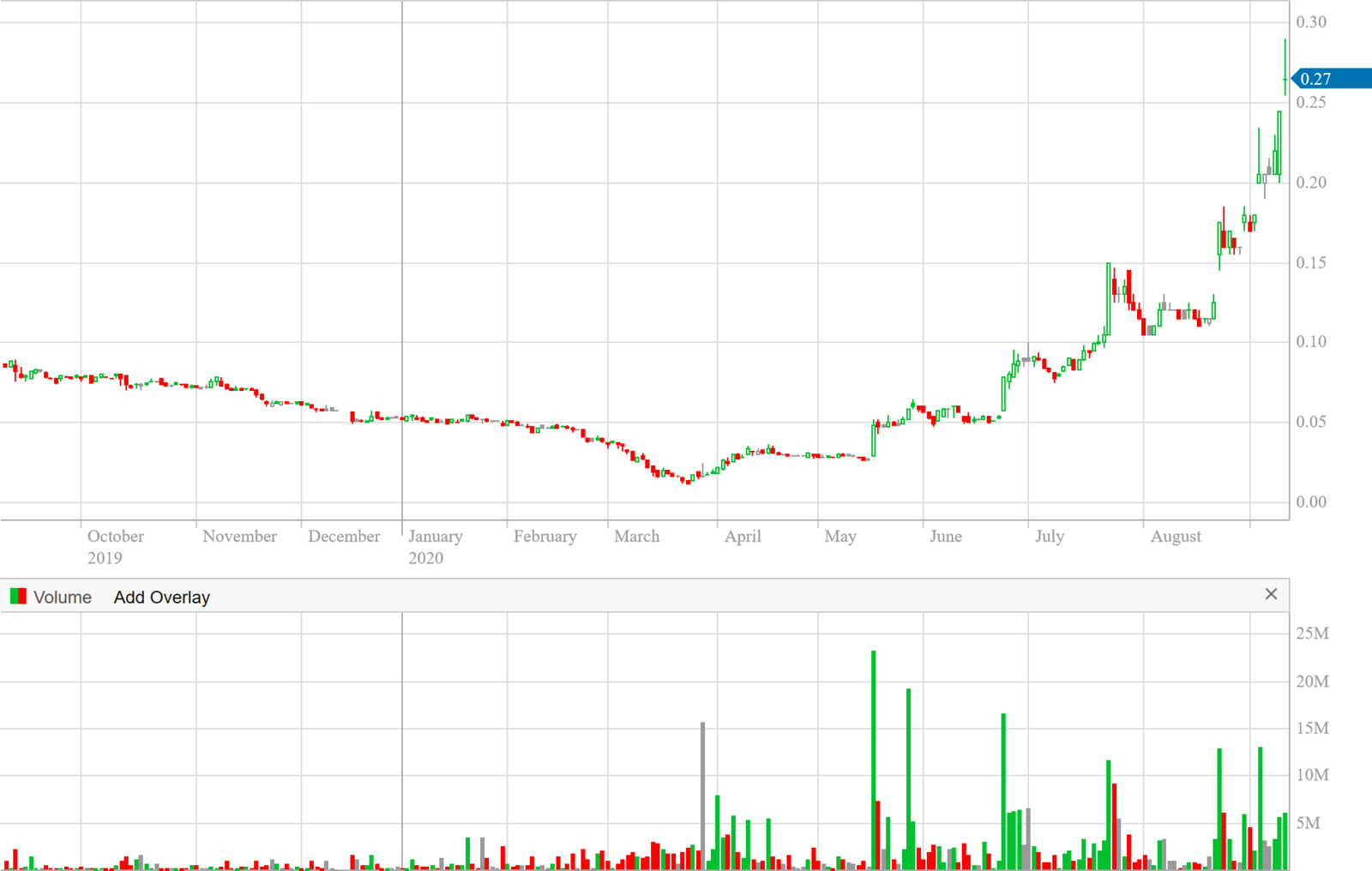 Yojee has launched a $15 million placement on Wednesday morning with help from joint lead managers Euroz Securities and Blue Ocean Equities. The offer was priced at 20¢ a share, which represented a 14.9 per cent discount to Yojee's last close and a 14.1 per cent discount to the 15-day VWAP.

Potential investors were told the money raised would go towards boosting its staff numbers to fast track its operations across six countries, as well as building out Yojee's technology offering.
Click to expand...

Yojee – which listed in 2010 – sells logistics software to help its clients optimise and manage deliveries.

Logistics company, Yojee (ASX:YOJ) is optimising the logistics industry by using blockchain technology to make the supply chain transparent in combination with its Artificial Intelligence software. It has a blockchain agreement with UPS as well as a substantial services agreement with a global freight forwarder.
P

Hi all,
I found the current chart of Yojee (ASX:YOJ) to be interesting. I'm on the learning curve of reading charts and in lew of Tech-A's current discussion about supply and volume, I was curious about others input regarding yesterdays high volume day. To my eye, the high volume bar coming off recent lows, with very little loss in share price seems to be a positive moving forward. I will wait to see what happens as it moves forward. Additional input quite welcome as I learn. Thanks, Craig 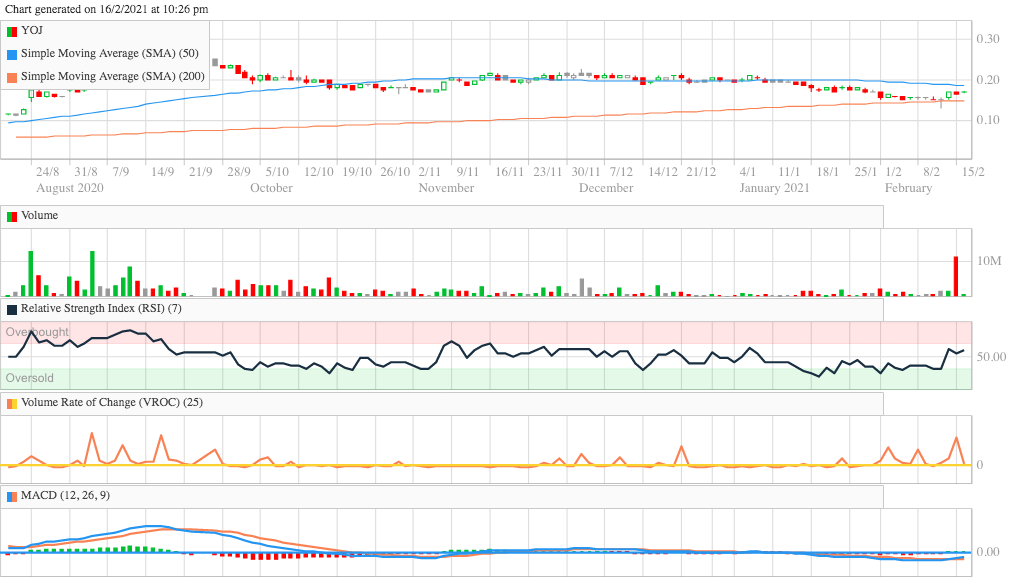 More Importantly How best to trade them.

Below are SOME of my breakout trading "secrets" Ive traded breakouts for years and trade 2 types.

My definition of an outstanding breakout is one which is supported by obvious corroborative evidence before the breakout which is confirmed by the breakout itself. Often we see this evidence but nothing comes of it.
Often we will see breakouts without much or any of such evidence.

So what is this evidence.
In importance.

(1) Price must breakout of something,a trend break,or a consolidation.(Not the case for Volume Breakouts---seperate topic)
(2) A gap out of the consolidation or in an opposite direction is preferable.
(3) There must be a confirmation in volume and NOT necessarily on the breakout bar,but it must either (Volume) herald an exhaustive move in a direction or an absorption of selling (Often a volume breakout in its own right).

I hold BLY but have been trading a lot of this move in a 60 min timeframe--havent grabbed it all but a good bit from 31/7.
This is a good illustration.

I put this here because its close to the "Breakout threads"
Click to expand...

PetEarwig said:
Hi all,
I found the current chart of Yojee (ASX:YOJ) to be interesting. I'm on the learning curve of reading charts and in lew of Tech-A's current discussion about supply and volume, I was curious about others input regarding yesterdays high volume day. To my eye, the high volume bar coming off recent lows, with very little loss in share price seems to be a positive moving forward. I will wait to see what happens as it moves forward. Additional input quite welcome as I learn. Thanks, Craig


See above Wiggy.
It is a positive as it's a nice supportive indication at that price point, but there is always the flip side of the coin-the negative, and a dump down out of the consolidation may be a resultant.

Whether it breaks out from here or not is another question, however, the bar can be seen as a signal, whether a setup follows is the dilemna.

A once in 6 months volume high is nothing to be sneezed at and this usually will indicate a move is likely to occur.

I will often buy into a bar that looks like that, with a time frame of 2 to 4 weeks in mind for a hopeful distinctive move in either direction.
There's no harm in being wrong, just need to keep our losers smaller and our winners larger.

In this case, I would err on the side of waiting for a confirmation of direction, due to a lot of "tree shaker" lose hands pull backs followed by a rise.
The SWF (Selfwealth) chart shows a recent example of this around 5 weeks? ago or so.
(Price retreated to around $0.51 before a steady move to current area)

PS: I often add some FA into the mix as it may provide some insight into an anticipated price direction or some impending announcement, the results of which may provide a catalyst.

Craig.
Thanks for sharing the chart.
The high volume bar with it’s very little gain clearly shows supply
supply needs to be exhausted before price can rise.
seller/s on this day met buyers to clear their positions.

The next day was more interesting in that it rose albeit slightly on very little
volume in comparison. The problem I see here is the range of the bars doesn’t imply
a drying up of supply from a willingness to hold the stock.
without an increase in Range I think you’ll see continued consolidation when in fact
we should be looking at stock with high volatility.

it may come to this chart——-
But isn’t yet evident.

Have a look at the FFG chart.This is an extreme but youll see range and volatility at its
most magnificent. Note that a gap should be read as a full length bar when any listing range
which I’ll chat more about in my trading without the bullsh*t thread as time allows.