The Fund's objective is to achieve pre-tax returns (net of fees) on the Investment Portfolio in the long-term that are higher than the Hurdle Rate (which is a fixed rate of 8.0% per annum), through long-term capital growth and dividends by investing in a portfolio of Alternatives. The Investment Portfolio will be a portfolio of funds and investments managed by Blue Sky Entities.

The Company will provide investors with the opportunity to access an actively managed portfolio and gain exposure to the investment experience, expertise and track record of Blue Sky Entities.

It is anticipated that The Blue Sky Alternatives Access Fund Limited (BAF) will list on the ASX on June 16th, 2014.
P

Opinions anyone, down about 5% from its listing price, bit of a new fish (just what are alternative investments?) With what and how it invests, been looking at a parcel for my SMSF as the manager seems to have very good track record.
H

following the recent....events....the exit just announced from the kiddie thing at about 20% under book is........ummm......I do not care about the kiddie loss per se but makes me VERY keen to see how the remaining valuations get written up here (particularly with the new board)....and can only wonder what the kiddie value would have been if not exited. Thoughts?
H

to anyone familiar with this......what I mean is that in business a realised 'loss' does not bother me as it is just part of the cut and thrust.....this actual kiddie 'loss' though is of concern due to the book-keeping/fee-structure that surrounds it.
H

The Blue Sky Alternatives Access Fund Limited (BAF), through BSAAF Management Pty Ltd (the Manager), invests in a diversified portfolio of Alternative Assets managed by Blue Sky Entities. Currently these asset classes include Real Assets, Private Equity and venture capital, Private Real Estate and Hedge Funds. Under the Company's investment mandate, each asset class must represent no more than 40% of the total value of the Company's assets.It has office in Australia and United States.
With the present instability and possibility of another GFC a few eggs in this basket may be advisable.
It's my pick for the November comp 2018.
D

The Board of Blue Sky Alternatives Access Fund Limited (ASX: BAF) announced on Tuesday it is progressing the appointment of Wilson Asset Management as its investment manager, on the basis of the in principle terms announced on 28 February 2020. The Wilson Asset Management team is looking forward to engaging with BAF shareholders and providing retail investors with exposure to exciting alternative asset opportunities.

The Board of BAF will soon provide a further update to the market on the agreed terms and the timeline of events.
H

this thing chugs along well under nta.
idle thought is that maybe with wilson there is an opportunity to do some catch up closer to nta?
(but no doubt they will do a fresh valuation at commencement, so stand by for that as part of that thinking)

funny story, back in the blue sky chaos days this thing did a share buy-back (using spp funds ) and would pre-announce what days it would be buying........ the days it was buying the SP always went up .... so the ideal time to buy was the day before the "buy-back" days. Took a month or so for them to realise what was happening and stop doing those announcements.
D

BAF still trundling along.... was in mid to high 70's for weeks then rose through to 85c this week. 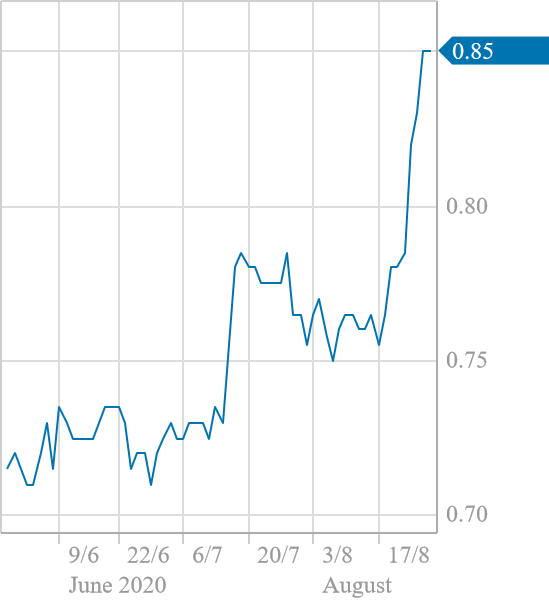 and voila, an Update; the Wilson ascension is nigh. just need pesky shareholders to vote.

There are a few sweeteners outlined in the update: as 'negotiated', retention of fee discounts plus

In addition to selecting WAMI as the chosen investment manager for the Company, the Board has secured on behalf of shareholders the inclusion of a ‘Premium Target’ objective within the new management arrangements. The principle of the Premium Target is simple: the Company’s share price needs to trade at a premium to its pre-tax net asset value for a period of one month for it to be achieved. If this does not occur at least three times during the next five years, shareholders will automatically have the right to vote to terminate the arrangements with WAMI, and to liquidate the Company.
Click to expand...

Based on the current discount to pre-tax NTA that BAF shares trade, a successful achievement of the ‘Premium Target’ represents a 28% uplift to the current share price.
Click to expand...

that discount is persistent. As well as the high cash balance, a significant number of assets still held have solid valuations*

Excluding the cash holding of the Company, the current BAF share price implies a valuation of $110 million, or $0.57 per share, for the Company’s diversified portfolio of agricultural and private equity assets, a 29% discount to their carrying values. Moreover, the Company has a $68 million investment in the Argyle Water Fund, the value of which is independently reviewed each month with reference to observable market prices. Further excluding the water fund investments from the Company’s current market capitalisation results in an implicit market value of $41 million for BAF’s remaining investment portfolio. This compares to their assessed fair value of $87 million, an effective discount of 53%.
Click to expand...

* must be read with the appended footnotes in the Update.

Whether Mr Wilson and his brand of value assist will be enough to resurrect BAF soon to be WAF remains to be seen. The newcomers have also stated, elsewhere, a desire to lift FUM to $1 billion. I can only imagine this will involve serial capital raisings which, of themselves, would surely depress the SP. Rather a tricky situation, IMO.

BAF's last iteration began with water and burritos and progressed through property in Manhattan and the usual capital raisings until falling, to now rise like the proverbial phoenix.

All aboard, choo, choo.

99.7% on board to move manager to WAM Alternative Assets. Expect a name change soon.

And selling it to the Wilson faithful.
D

- now it has come off, it is an interesting read from one of the participants:

GVF’s portfolio benefited from two significant developments during August. The first was a substantial share price re-rating in Blue Sky Alternatives Access Fund BAF, one of GVF’s largest holdings and an investment that we have been intimately involved with for some time. We first invested into BAF in late 2018 after a high profile short-seller’s report came out against the parent company of BAF’s investment manager. This report made a number of allegations, including an assertion that many of the assets that the Blue Sky group managed were materially mis-valued. These allegations were sensationalised in the press and, in our view, served to create a narrative in the market that material write-downs to the carrying values of BAF’s assets were imminent. While the countless press articles written about the Blue Sky saga made for dramatic reading, we did our own thorough due diligence on the BAF investment portfolio before investing. Our conclusion was that the underlying portfolio of agricultural, real estate and private equity assets were worth substantially more than the then prevailing share price. At the time this was a controversial view.

In mid-2019, Miles Staude, GVF’s portfolio manager, joined the BAF board to add his expertise to the necessary process of extracting the company from its existing management arrangements and rejuvenating the BAF investment proposition. With the parent of BAF’s investment manager having gone into administration, this exercise required lengthy and determined negotiations with a number of different counterparties. Pleasingly, during August, the BAF board announced that it had finalised these negotiations and that an extraordinary general meeting (EGM) would be held in early September to approve the terms the BAF board had secured. On 8 September, BAF shareholders voted overwhelming in favour of the new arrangements for the company. These involve moving the investment management function of BAF to Wilson Asset Management International, whilst still also retaining many of the valuable benefits shareholders enjoyed under the old management arrangements. In addition - and much to their credit - WAMI have agreed to a new ‘Premium Target’ objective in their appointment as manager. The principle of the Premium Target is simple: BAF’s share price needs to trade at a premium to its pre-tax net asset value for a period of one month for it to be achieved. If this does not occur at least three times during the next five years, shareholders will automatically have the right to vote to terminate the arrangements with WAMI and to liquidate the company. Our view is that this feature provides a strong alignment between WAMI and its shareholders in terms of tackling the key challenge the company faces, namely the large discount to asset backing that its shares trade at.

From the beginning of FY2021 through to the time of writing, BAF has already delivered a total shareholder return of 28%. Despite this, the shares today continue to trade on a large discount to their pre-tax asset backing and we continue to see exciting upside from here, as the benefits from the new management arrangements begin to come into effect.

Thankfully, not all of GVF’s investments require us to roll up our sleeves and expend the amount of energy that BAF has required. What was unique about this situation was the very deep levels of value that were on offer and our belief that we could affect positive change for the benefit of all shareholders. Finally, it is worth highlighting that while our original view on the true quality of the BAF investment portfolio was controversial at the time, it has ultimately been validated. There have been no significant asset impairments during the time GVF has been invested in the company. Instead, the most important developments have been impressive total returns from the Argyle Water Fund – by far BAF’s largest investment – and a substantial uplift that occurred from the successful sale of the student accommodation portfolio. This exit took place in October 2019 at a 17% premium to carrying value.