WGR's main project is the 100% owned Rover project in the NT, located about 100km west of Tennant Creek and 100km from the railway line and gas pipeline. Explorer 108 is a Pb-Zn-Ag occurrence and Rover 1 & Explorer 142 are IOCG (Iron Oxide Copper-Gold, a la Prominent Hill, Olympic Dam) targets within this project. Field access to Explorer 1 awaits the outcome of negotiations with the Central Land Council.

Mineralisation is covered by 1-200m of younger cover sediments, beneath an unconformity surface. Downhole geophysics is planned for 2007 as is the follow-up of geophysical (gravity) targets. WGR are planning to spin out their WA gold, uranium & nickel assets into a new listed company. Drilling is expected to recommence around 20th Jan 07, depending on the wet season.

Strike length disovered so far is 250m and is open in both directions. Thickness of the mineralised dolomite is 150-200m.


Corporate structure.
107m shares * 35c = 37m market cap. MLX (Metals X, formed from the merger of MTX & BTX) owns 19.6% of the shares. MLX is controlled by Peter Cook & Peter Newton. See my posting on MLX for more details. Perhaps they are planning a merger to form a mini mining-house (Nickel, Tin, Cu-Pb-Zn, Gold) or a takeover at some point. They also have a history of trading in blocks of stock in other companies if they think they can make a quick buck.

Law suit
"In September 2000, the Company issued proceedings against St Barbara Mines Limited (SBM) and Mr Ron Woss, a former director of St Barbara Mines, for an amount of approximately $7.6 million. The matter is listed for trial in the Supreme Court of Western Australia from 6th to 17th November 2006 inclusive".

(Note: no news on a verdict at the time of writing - exgeo).

"Results confirm a second high grade target in major shear zone adjacent to the known dolomite breccia hosted mineralisation. Mineralisation still remains open in all directions. Drilling to delineate the overall size of the system is planned to recommence in late January 2007".

Late yesterday WGR announced they had settled a lawsuit with SBM for $0.7m. This should be handy for them, put into the context of their recently having raised $2.5m. A useful sum for a small company. A seperate action against Mr Ron Woss relating to the same matter (former SBM director) remains outstanding.

Another $2.15m in the kitty after settling with Ron Woss, a former SBM director. $2.85m in total to settle both actions. $5m that they now have should buy a lot of metres of drilling.

Explorer 142
Results from a deep diamond hole (NR142D-003) to test for down-dip depth extensions to the Explorer 142 mineralisation. Best result was 1m @ 1.36% Cu and 0.23 g/t Au from 492m which is a bit disappointing IMHO. However, WGR believe that the main section of the mineralisation might have been missed by the hole and plan to do downhole geophysics to test this theory.

Explorer 108
Diamond drilling has recommenced to close off the mineralisation, "which is not currently constrained by drilling."

Will be an interesting one to watch tomorrow..

Will be an interesting one to watch tomorrow..
Click to expand...


They got an ASX speeding ticket on the 28th.

The announcement after trade tonight sounds a bit like Lasseters reef (the legend, my Father had me believe that for many years, it made a young fella just want to get out there and find it) Market will probably go mad on it tomorrow but will be intersting to see when the dust settles on a proper analysis of the sampling and more defined drilling. Would have been good to have known about a few days ago, someone did from the 19th August.

explod said:
They got an ASX speeding ticket on the 28th.
Click to expand...

"The Company is not aware of any specific information concerning it that has not been announced previously which could explain the recent increase in the Company’s securities and trading volume."

No, we know nothing. NOTHING!

At least they went into a halt for this one.

I hate leaky ships. Seems they are sailing a sieve.

Barrry Fitzgerald onto it in the Age in Vic today, unusually, he sounds a bit excited as well. Will be intersting to see the open this morning

a jump of 8% on the preopen already

This gold fever is one to watch as things keep going a bit stronger. Care needs to be taken not to get too sucked in. There will be good opportunities but measure the real values. Will post something on this on gold thread later.

I'm annoyed too. Sold mine after the "nothing to report" reply to the speeding ticket. Was expecting them to fall back after that. Doh!
G

Looks like the volume and traders falling back now. This might look interesting over the next few days.

kennas said:
And their response:

"The Company is not aware of any specific information concerning it that has not been announced previously which could explain the recent increase in the Company’s securities and trading volume."

No, we know nothing. NOTHING!

At least they went into a halt for this one.

I hate leaky ships. Seems they are sailing a sieve.
Click to expand...


kenna the funniest example of that is IRESS - rumours that the ASX will take them... share price has been skyrocketing but where's the speeding ticket??? what are they gonna say?

R1ARD41-1 is a hole started by ADN Adelaide Resources on their side of the boundary. (By reciprical agreement each company has used the other company's holes, and extended drilling into their own tenement.)

In this thread, I didn't see mention of the fact that the Rover 1 deposit straddles the tenement boundary.

Thought this stock worth mentioning; they have more than 3 Moz JORC in 2 deposits, one of which average grade is 5.5 gpt. Production plans to come, but looking at 200kOz/annum to commence 2014. Expect their resources to grow before production, but potentially another gold producer which will fill the CAH type gap (ie. mid tier Australian).

Not much in the way of price action, but the makings of a strong company are there and recent research by Fosters places a 40c price target on them. Of course this counts for little but gives an idea of the upside available.

Would be looking for a run up to initial 25c mark, then perhaps a slight retraction before pushing through to head for 30c and possibly 40c if gold gets moving again, however it seems that producers are more in favour and this may mean that WGR, GOR and ABU may not be the great picks that they could be, for a while, but it seems that at this stage, potentially with PVM and ERM, this may be where the next crop of small-medium producers is to come from....all with decent grades and great potential.

JUNE QUARTER HIGHLIGHTS
SCHEME OF ARRANGEMENT
•On 14th May 2012, Westgold announced a Scheme of Arrangement for the Company to merge with its largest shareholder, Metals X Limited.
•An Independent Expert’s Report, including a valuation and a technical review of Westgold’s and Metals X’s assets, was completed for the Scheme Booklet relating to the proposed merger. Documentation was lodged with ASIC on the 17th July 2012 for consideration prior to the first court hearing.

CENTRAL MURCHISON GOLD PROJECT (CMGP)
•The Definitive Feasibility Study (DFS) is advancing well. Initial results have been positive, demonstrating a case to broaden the scope to consider increased plant throughput to 1.5Mtpa, and the opportunity to extend the initial mine life beyond the current eight years from the Big Bell and Great Fingall underground mines.
•Clearing Permits have been submitted for all proposed mining activities.
•Acquisition of the remainder of the Great Fingall Deeps JV has been finalised, providing Westgold with 100% ownership of the Mineral Resource and Probable Reserves at the historic Great Fingall mine.
•The review of previous drilling around historic stoping at Great Fingall demonstrates the potential to add underground resources. An initial review has highlighted 6m @ 4.12 g/t (including 1.9m @ 7.1 g/t Au) adjacent to stoping voids 100m below the base of the current pit.

ROVER PROJECT
•The Rover 1 Mine Management Plan was submitted in April to the relevant Northern Territory regulatory authorities. It was subsequently determined that the project does not require review under the Environmental Assessment Act, however the Department of Resources has requested additional information relating to the plan which has extended the approvals process. Westgold is currently working to provide the additional information required.
•Drilling - two holes were completed on a new target adjacent to Rover 1 defined by a geophysics (IP – Induced Polarisation) survey conducted in March.

CORPORATE
•Westgold had an estimated cash balance of $7.1 million at 30 June 2012, including $3.4 million of cash-backed environmental performance bonds.

Been a while since this had an update. I did notice it getting a mention in a few areas outside of this thread.
A few charts from yesterdays data (17th), bear in mind this is midweek on a weekly system. 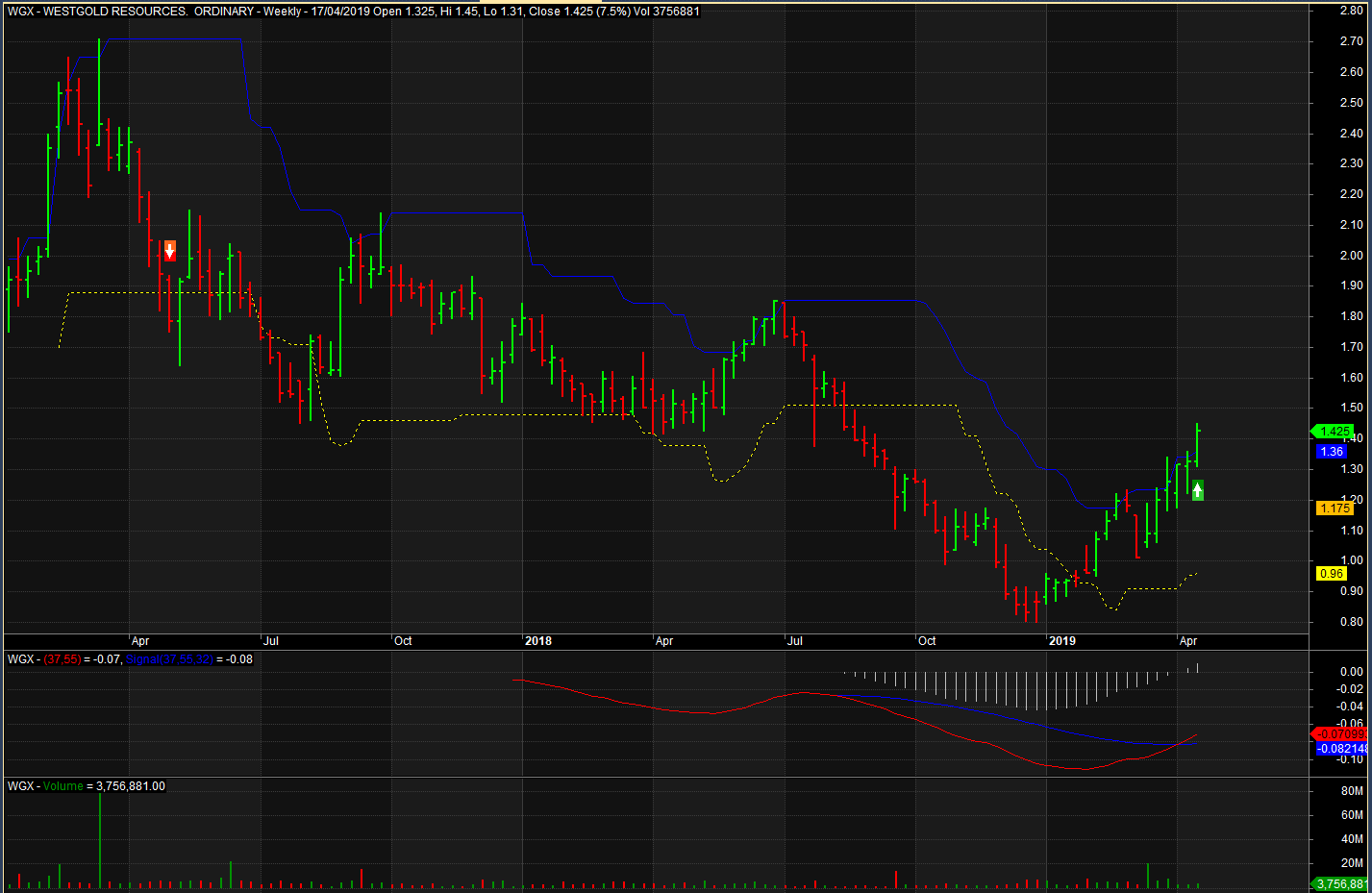 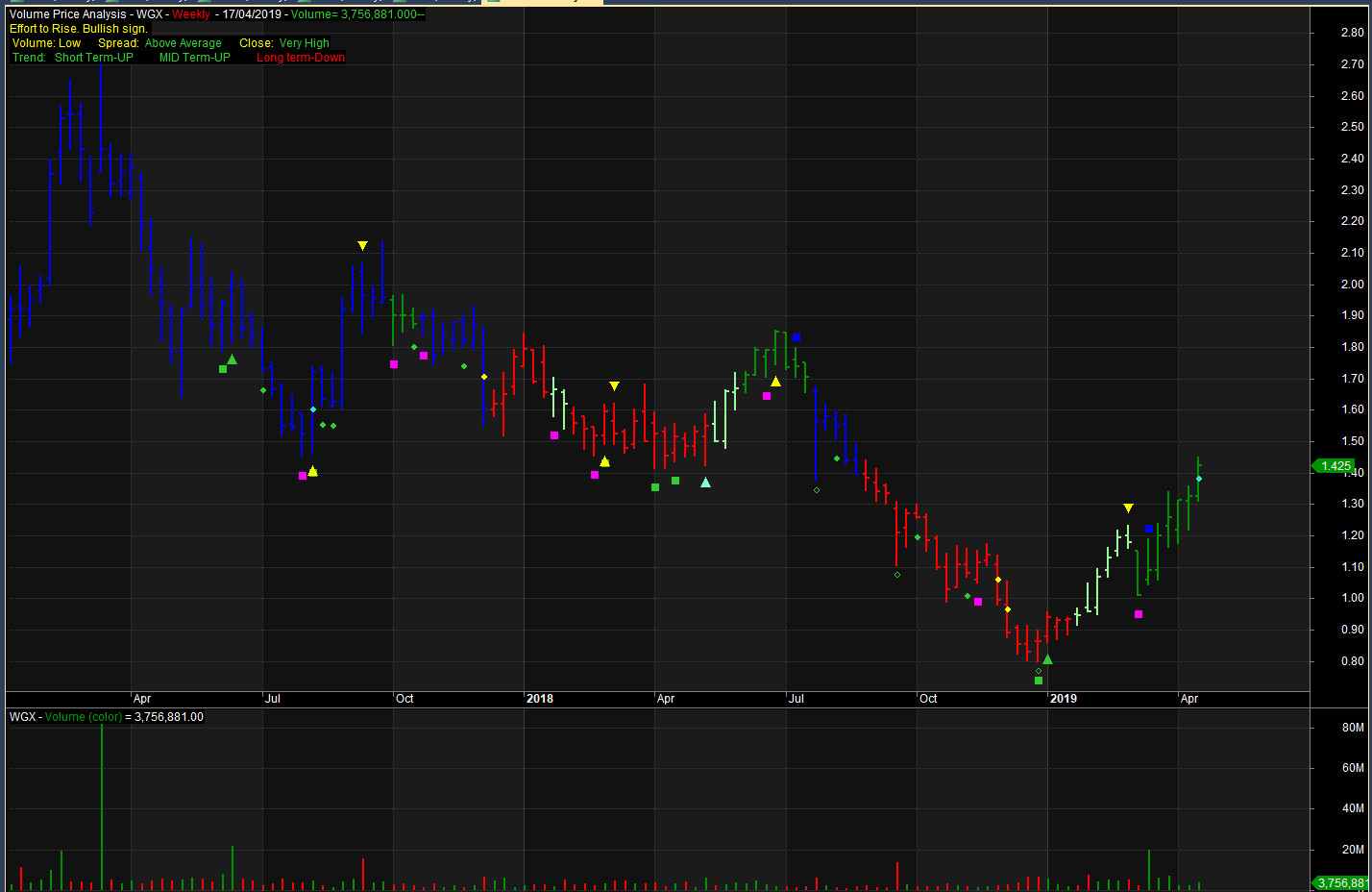 
Not as much as I used to now that Amibroker has become the primary software.
I still use it to reduce the number of potential candidates by seeing where a stock price may be in a pattern or where a target area or turning point might be.

I can’t post an example just now as I’m on an iPad in Brisbane til Wednesday morning but I’m sure you know what I mean.