Trading the XJO with CFDs 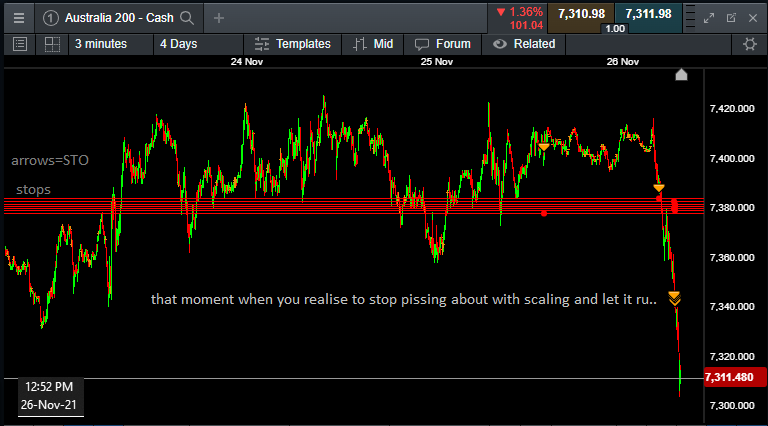 Quite a struggle this week. Internet connection problems, a missed day due to health issues, spent about 80% of the week one step behind the prices. I got long on the most bearish day of the month. Managed the position perfectly and got out without any real pain. My methods are valid although I need to be more active. Psychology needs work.

3% pull is normal in a healthy bull

I'm assuming the major move on Friday is (short-term) a touch overdone. The overnight session closed 100 points below the day session close. It's highly likely the open either gaps up 50 or so points and/or very quickly moves up. After that we need to see how the rest of the week plays out.

BigFaceBollinger said:
I'm assuming the major move on Friday is (short-term) a touch overdone. The overnight session closed 100 points below the day session close. It's highly likely the open either gaps up 50 or so points and/or very quickly moves up. After that we need to see how the rest of the week plays out.
Click to expand... 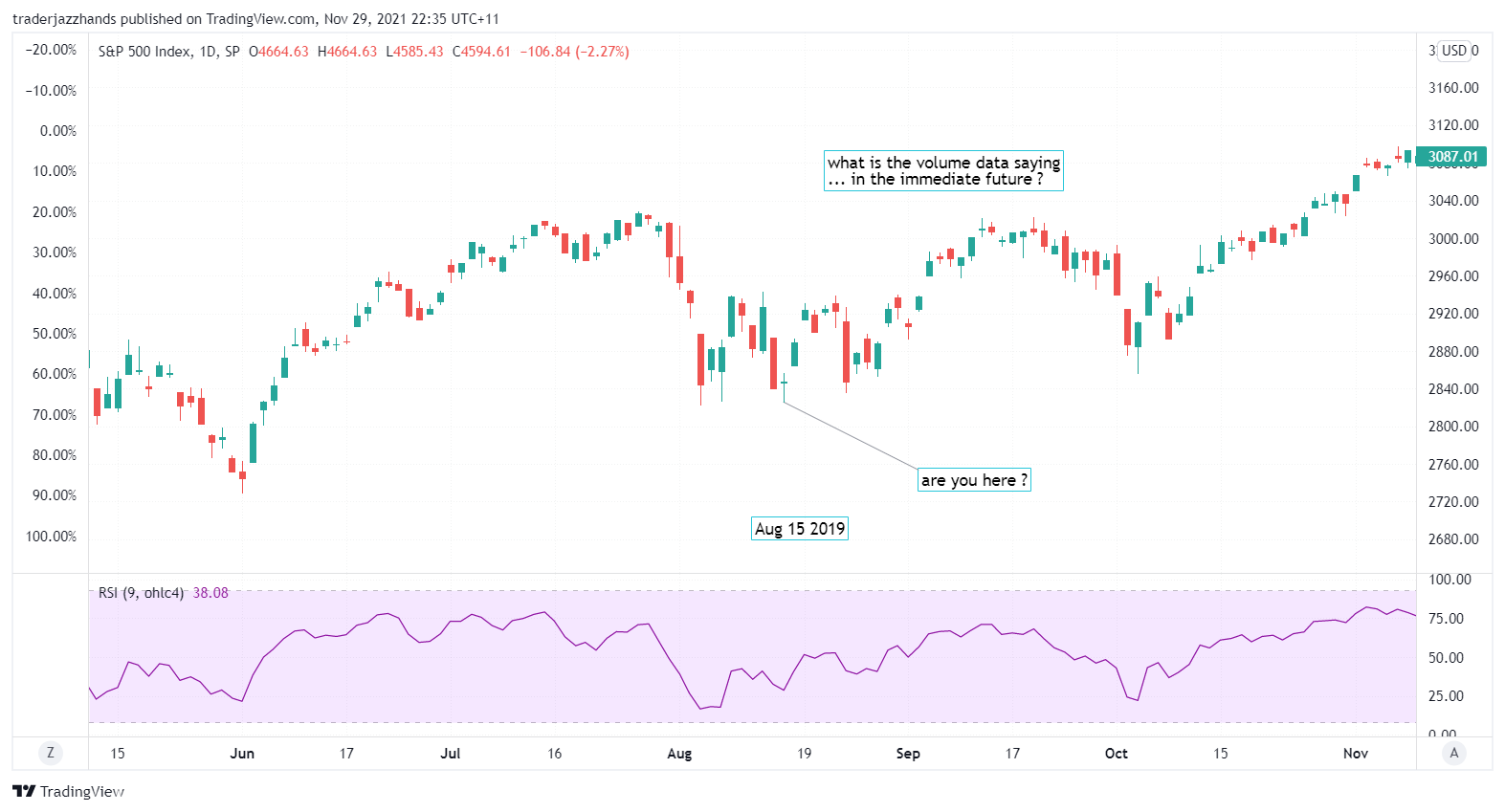 take a gander at the above chart for $spx, then consider the up:down volume for both Aug 2019 v Nov 2021 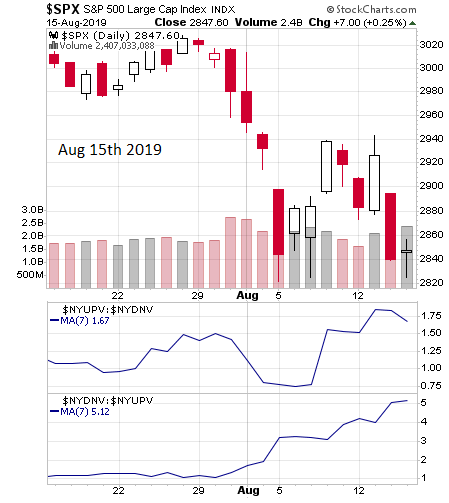 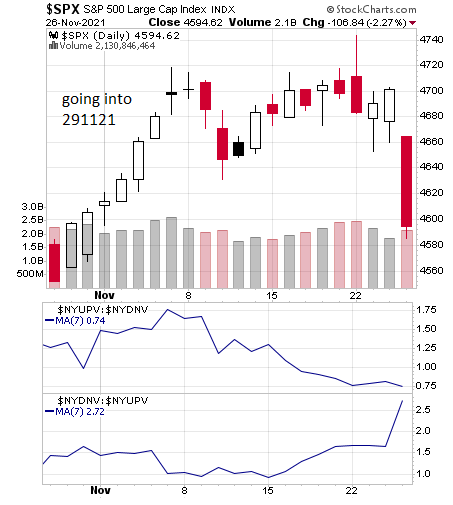 or looking at this in a wider view for a relative exercise
4 month prior the divergences were signalling well into the recent high in both buy and sellside volume
...both sides of liquidity diverge against the print, as s healthy, but, into the recent high the buyside disappeared,
it simply lost momentum, the endogenous fear was already firmly established, price must follow the health of market psychology
keep in mind that "oversold" does not [immediately] mean [buy] bargains 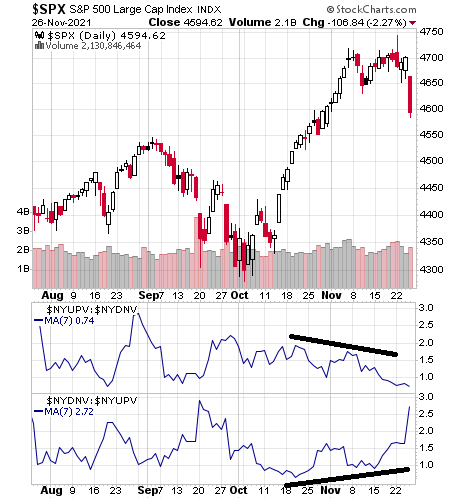 forced to take some insurance BTO's $xjo at the open, close the lower sells

gorilla having a bouncy nap ? 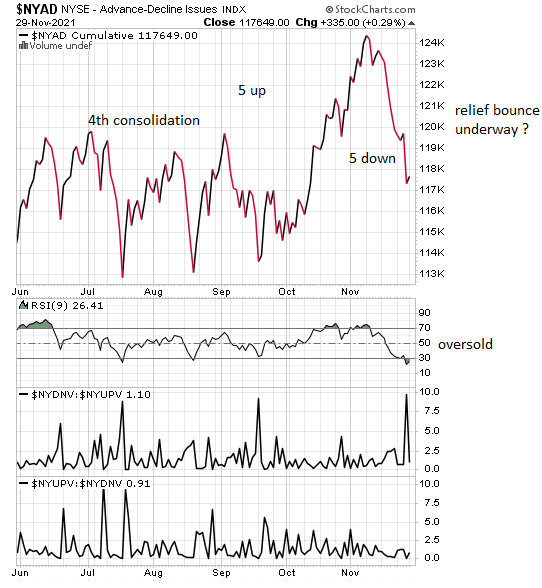 ..and we're back on the sell

so if we just went thru a fake sell for the (up)trend to take a breather (let's say hourly basis)
and just get to a value zone for buyers to re-enter..
should pros be buying the close or selling the close today?
K

There isn't a lot of confidence in the AU market at the moment. I don't like to see these late afternoon sell-downs.
KH

KevinBB said:
There isn't a lot of confidence in the AU market at the moment. I don't like to see these late afternoon sell-downs.
KH
Click to expand...

yes, Kevin ..for long-only holders the current reset is likely a several weeks to go before we get a resumption of the major uptrend

the mini rips in $xjo today are not fakes but theyre hooks,
levels are levels, take them with a plan and size correctly,
if youre trying to pick a low, when price jabs up, you'll get run over,
diff market now,
#thoushaltnotkidthyself

and we are back with the offer

ha, weekend studies
if the $spx is the gorilla might pay to check on its health
this is the $spx versus the $sml
the S&P600 small caps is the reflex health, when it drifts away the speccie end has decided it doesnt like price discovery
the major indexes meanwhile keep trudging higher and the key about that is mostly in the idea that
the breadth failing in the major indexes while the daily bars for the small indexes has clearly begun a series of lower lows
while the majors are still making a series of higher highs (regardless of the construction being in impulse mode (still) or distribution climb)
with the key component being the ETF which displays money managers and late retail investment money flowing with enthusiasm

from a larger, let's say weekly point of view, we need a commensurate retracement of the whole upleg from
March 2020, in percentage terms that would make 4100 a strong level, the probablities look good for genuine fear at 3850 at level
which would be a decent level to consider re-engaging into a stock basket

i am selling index tops and several commods, buy-side liquidity is clearly struggling