Southern Cross Gold is a spin-out of TSX-listed Mawson Gold Limited which together with Southern Cross Gold has spent more than $6,000,000 acquiring and exploring a portfolio of gold properties in Victoria and polymetallic ground in Queensland.

The Company has interests in the following Projects:

The Sunday Creek Project is a shallow orogenic (or epizonal) Fosterville-style deposit located 60 kilometres north of Melbourne and contained with 19,365 hectares of both granted and applied for exploration tenements.

The main historic workings at the Sunday Creek Project have been drill tested with encouraging results and remain open at depth and along strike demonstrating the Company’s belief that the Project has the potential for continuity of high-grade mineralisation.

Whroo Project – Option to earn up to 70%

The 14-kilometre long Whroo Project is one of the largest historic epizonal goldfields in Victoria located 130 kilometres north of Melbourne within 221 kilometres2 of exploration tenements. The Whroo Project consists of the Balaclava Hill area which contains thirteen named reefs from an open pit and 137 metre deep shaft, while shallow workings extend over the entire trend

The Redcastle Project is located in central Victoria 120 kilometres north of Melbourne and 45 kilometres east of Bendigo. Redcastle is a shallow orogenic (or epizonal) Fosterville-style historic high-grade field held within a tenure area of 56.7 kilometres2 of granted exploration tenements. It is located 2 kilometres along strike from Mandalay Resources Ltd’s Costerfield mine exploration tenements and on a parallel north-south structure 24 kilometres east of Agnico Eagle’s Fosterville mine.
Fosterville and Costerfield are two of the world’s highest grade underground gold mines. Part of the northern margin of the tenement adjoins a Newmont Corporation exploration licence application.

Southern Cross Gold has staked through its 100% owned Australian subsidiary, Mawson Queensland, seven exploration prospecting licences for 861 kilometres2 of granted exploration licences in the Cloncurry district of Mt Isa, over a combined 60 kilometres of strike, and is surrounded by South32 Ltd and Sandfire Resources Ltd.

It is anticipated that SXG will list on the ASX during May 2022.

Southern Cross Gold (SXG) is a natural resources company which is engaged in the exploration of precious and base mineral interests. Mining in Victoria and Queensland.


Watched this the last couple of days. These hits are in the region of Fosterville which I think makes it very interesting. Not sure if the Fosterville Fault runs through their paddocks though.

Warning. Every gold stock I've bought in the past 18months has gone down. I liked the recent drill results for SXG and I've bought a small parcel today in the opening dump. Note the warning, please.

I'm trading this for the medium term as I think they'll continue to post impressive drill results. However if I get a price spike that's too good to refuse (>1.00) I will sell half.
T

peter2 said:
Warning. Every gold stock I've bought in the past 18months has gone down. I liked the recent drill results for SXG and I've bought a small parcel today in the opening dump. Note the warning, please.

I'm trading this for the medium term as I think they'll continue to post impressive drill results. However if I get a price spike that's too good to refuse (>1.00) I will sell half.
Click to expand...

Can relate to what you mentioned @peter2 about most (if not all) gold stocks being lower as compared with 12-18 month's ago.

Thanks for highlighting SXG as didn't know about it. Impressive drill result's for sure as kind of reminds me of my other gold stock SNG when it hit 2.5m @ 358g/t Au! & share price shot up 55% only to be much lower now (well below initial spike price month's ago).

every knowledgable commentator (IMO that is) is suggesting that precious metals miners and junior miners especially are so undervalued in what looks like the commencement of a major bull run for PMs, took a small stake today

signalFollower said:
every knowledgable commentator (IMO that is) is suggesting that precious metals miners and junior miners especially are so undervalued in what looks like the commencement of a major bull run for PMs, took a small stake today
Click to expand...

numerous examples today on the livestream of Gold Events 2022, which is still on tomorrow so maybe tune in and hear it first hand

You'd think a gold MD would start with "Eureka" not "Bingo!" in his ramp.

Some good grades here, but most are pretty thin intersections.

Hard to tell what it looks like with the cartoon they have in the announcement as it's pretty crappy. 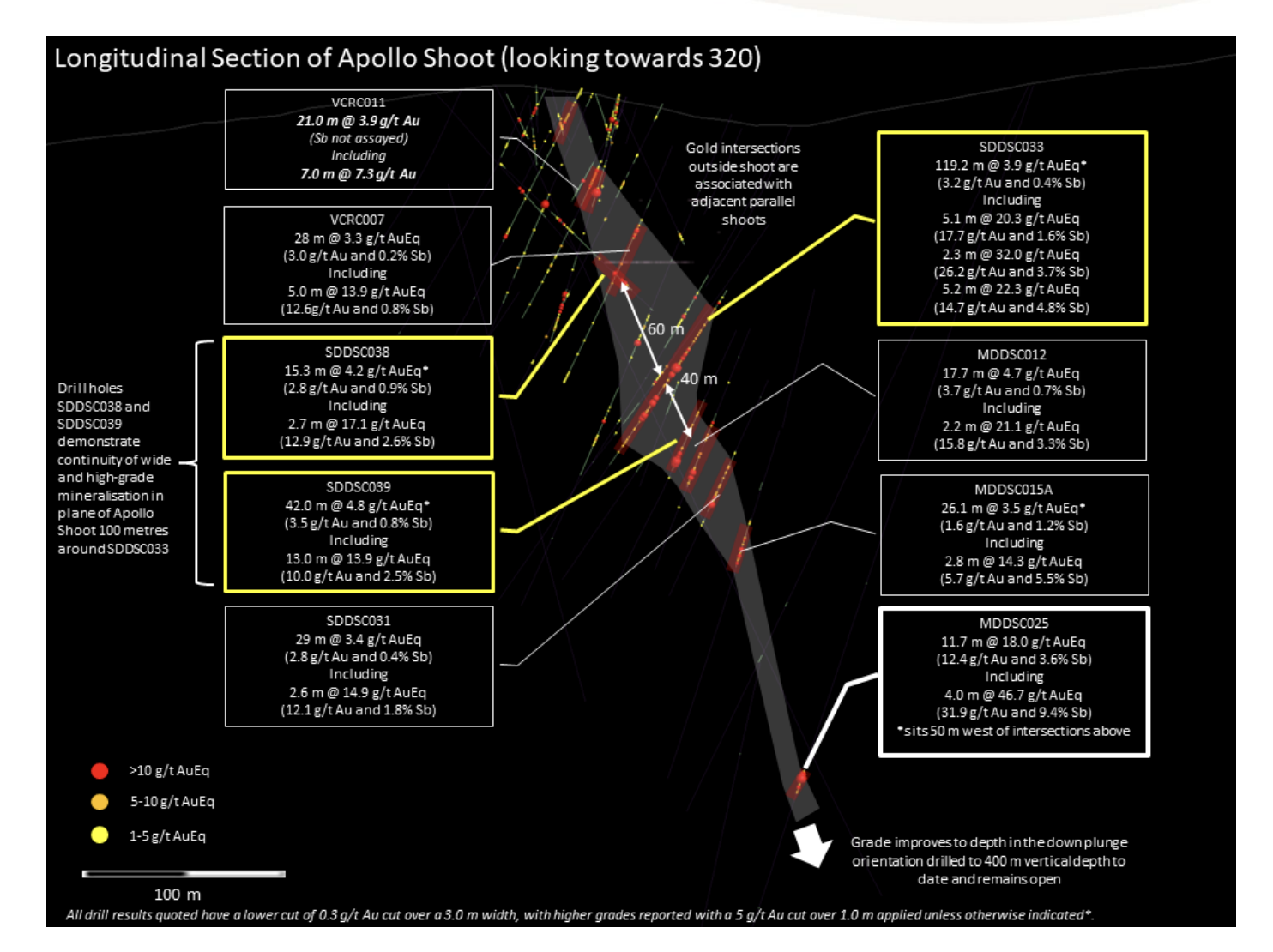 This is significant as it demonstrates the highest grades of gold seen on the project to date, on a new shoot at Rising Sun, in a 350 m step out west of the Apollo high-grade area.

“The Sunday Creek system is developing on multiple fronts, as we continue to intersect extremely high grades of gold at the upper levels of the system (140 m vertically below surface) including 0.4 m @ 380.6 g/t AuEq.
Click to expand...

This bodes well for the potential development of better grades continuing to develop at depth, as we have seen in similar and adjacent epizonal systems in Victoria, that are mined at some of the highest grades globally. These results continue to demonstrate that Sunday Creek is a significant exploration discovery in the renaissance of the Victorian goldfields"
Click to expand... 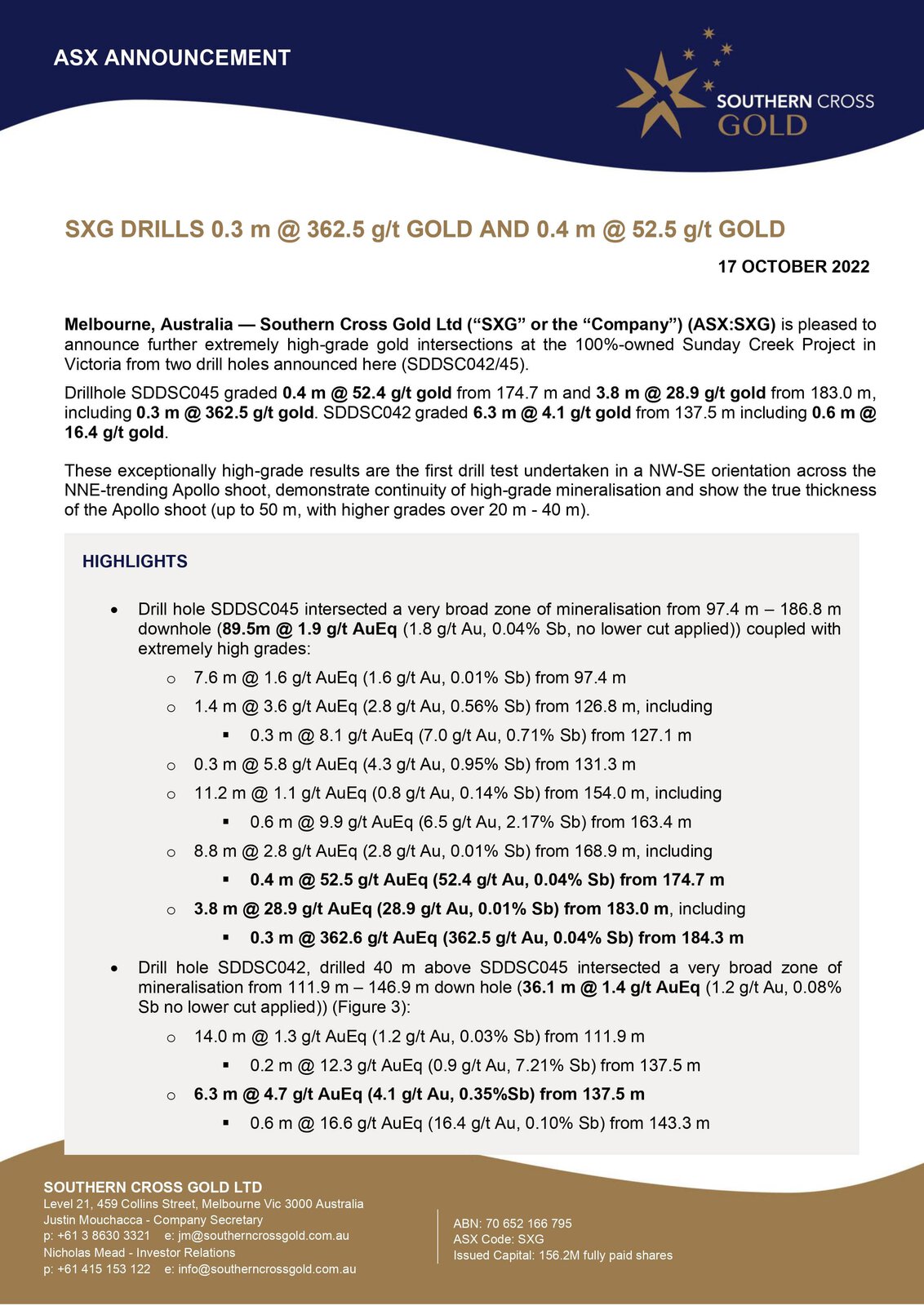 Bought speculative position in SXG after more massive drill results. I wonder if the punters will get as excited as last time. Need the POG to start rising also. 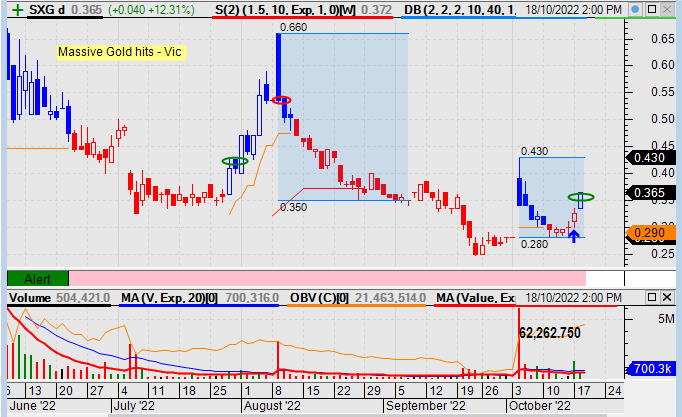 It's worth reading the full announcement here to get an understanding of the geological setting that these guys are drilling in. It's an epizonal deposit, similar to Fosterville. Could turn out to be something quite significant.

The cartoon below is a little better than the things they've produced earlier to see how the shoots might be structured and their dimensions. Needs a lot more drilling to fully understand it. 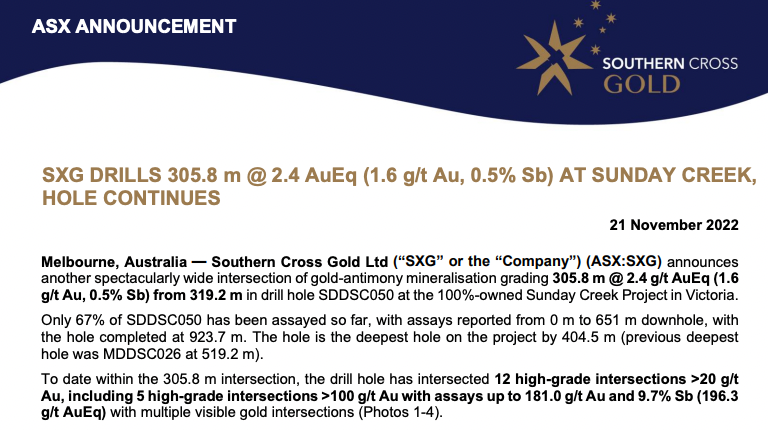 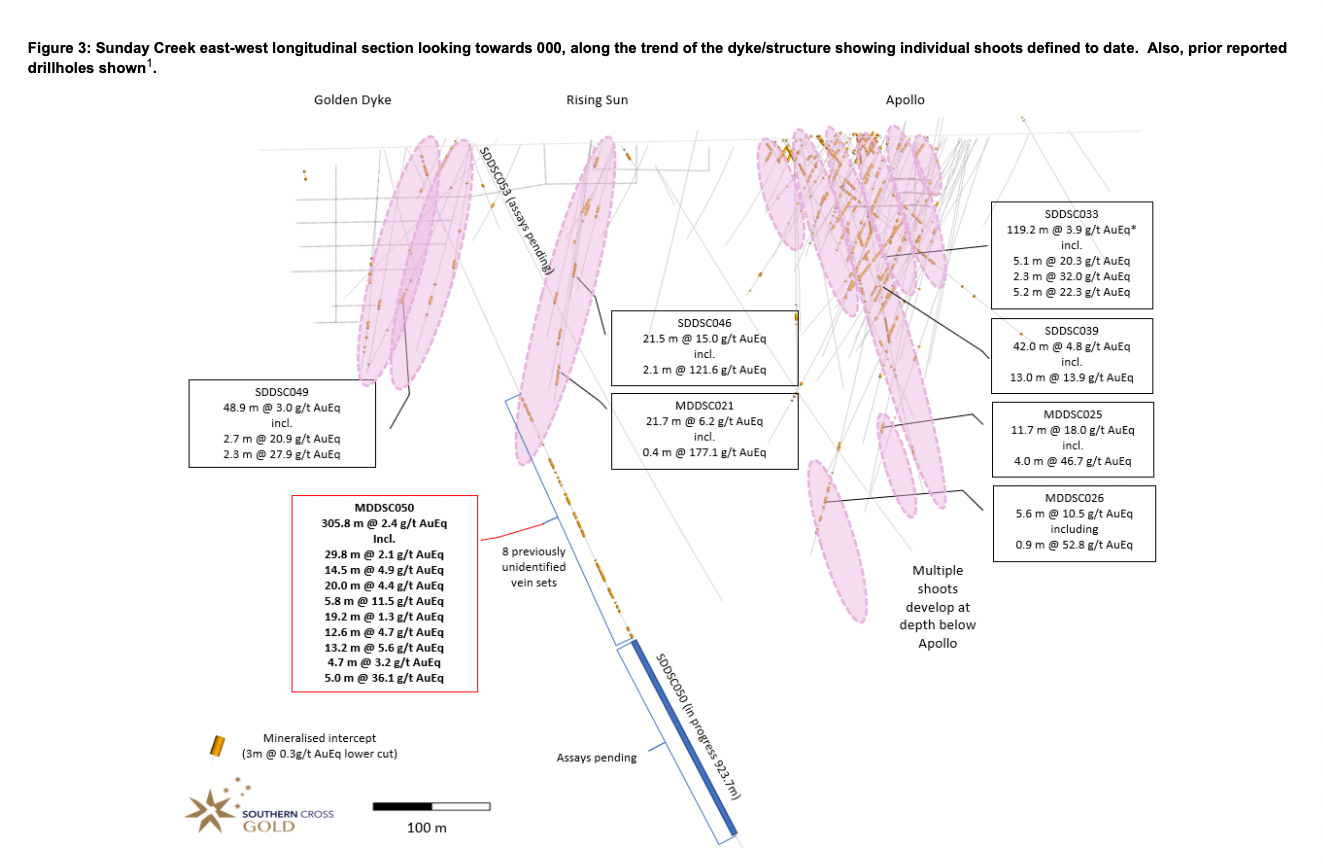 And, almost inexplicably, they are also in a halt for a capital raise. Why do a raise at the current SP when you come out with a material drill result? You produce the result, ramp the hell out of it, and then do the CR after it's jumped 10-20%. Nuts.

Good lesson on what this deposit is from the MD.

Adding a couple of drill rigs. They're going to have to put a lot of holes, and very deep ones, to fully define this system. Could be drilling for a couple more years before an MRE. 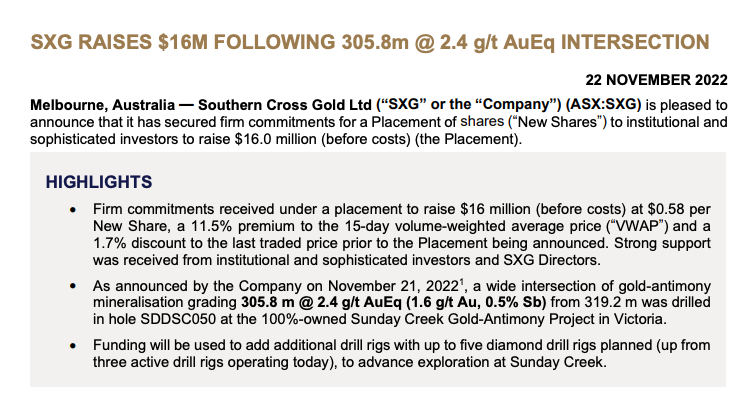 Could have done the raise at 70c+ and saved a tone of dilution for current holders. 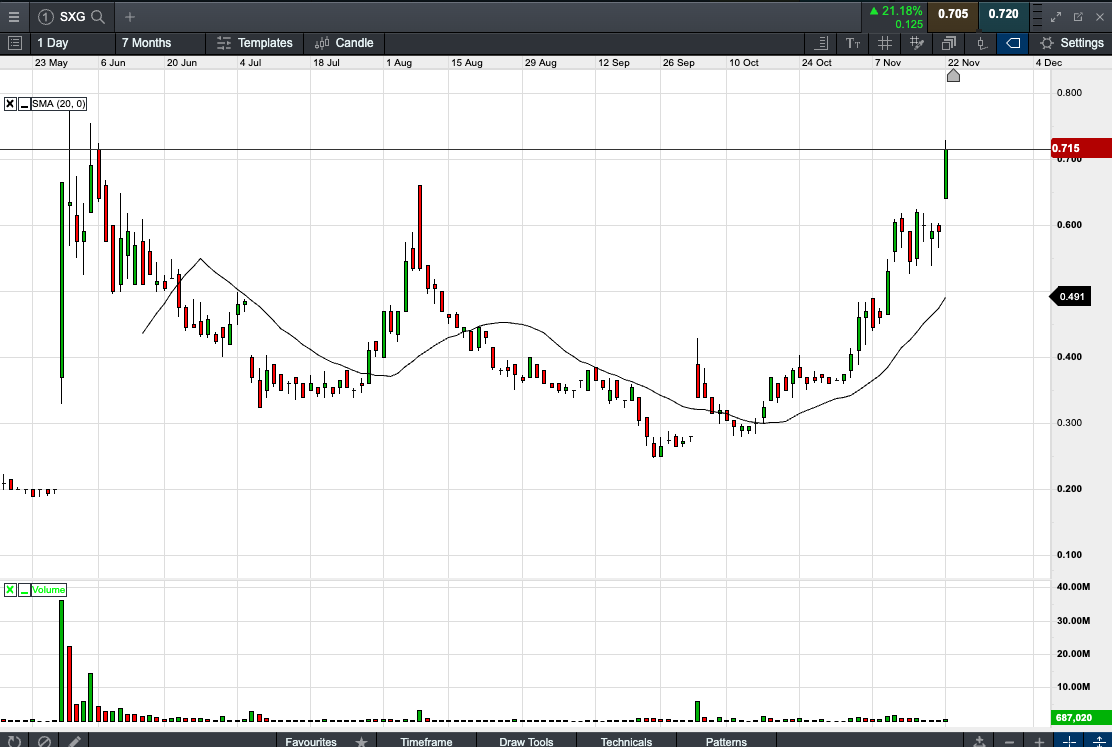 The bottom of that last exceptional hole (blue box) should be released in Dec and I'm placing a bet that there's some more Au and Sb in that section. If so, it could do anything.

Will likely be dirt due to me picking it in the comp, so a great opportunity to add to the short list. 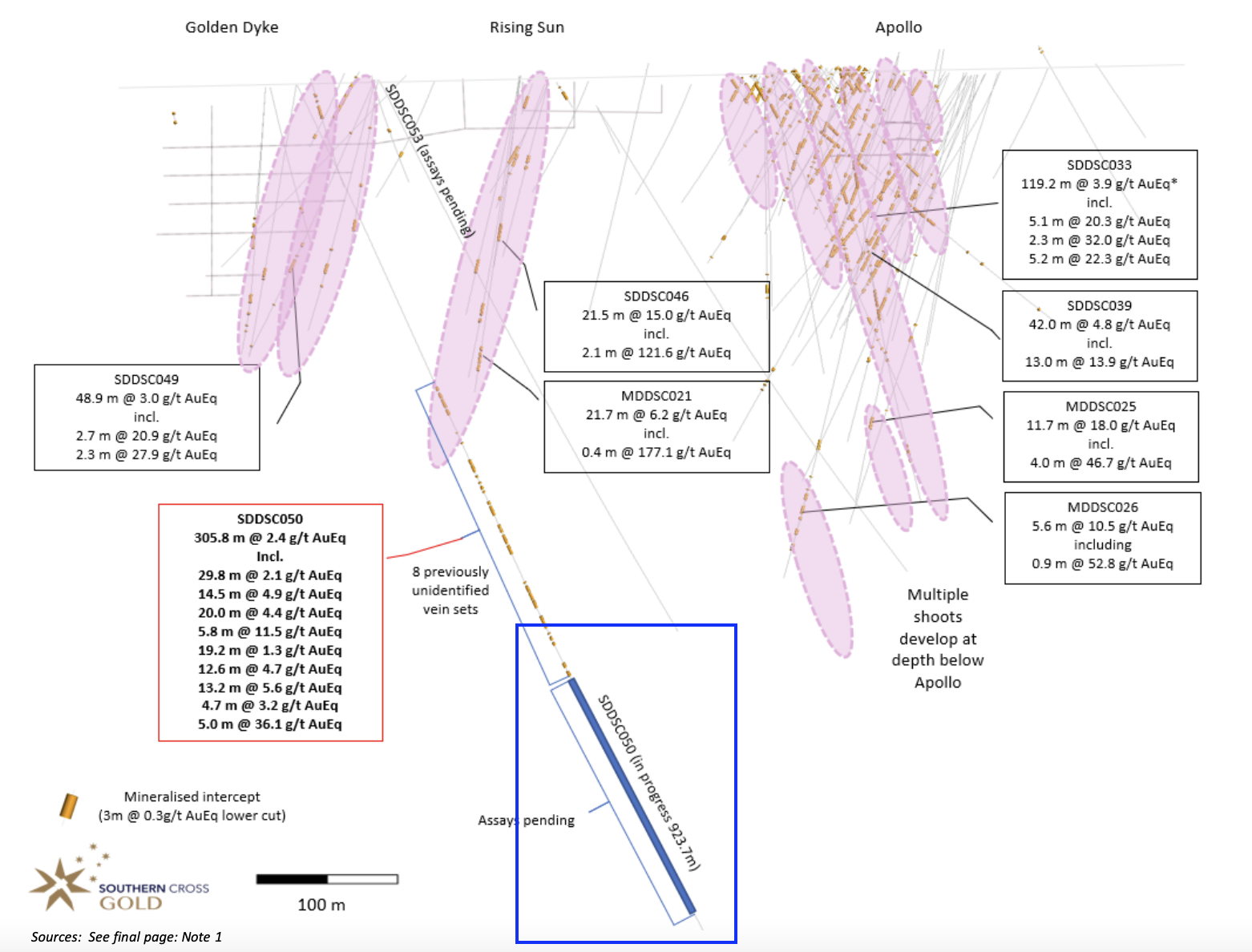