Rumble Resources Ltd (RTR) is an Australian based exploration company established to invest shareholders’ funds in precious metal and base metal exploration, development and mining projects. Rumble's objective is to identify and acquire quality assets with the aim of adding significant value to those assets via strategic exploration and development programs.

Rumble has the right to earn substantial equity interests in 3 project areas all with a major focus targeting gold in Western Australia:

I aware you on the next SIRIUS energy

Volume and price increasing for Rumble Resources over the last few days. It has moved through 6c today will relative ease.

Capital raising of $4.8 million via the issue of 68,571,429 shares at 7c per share was completed in November last year so they are currently well funded for the foreseeable future.

Rumble Resources has announced this morning that it has entered into an earn-in and exploration joint venture agreement with AIC Mines Limited (A1C) for the Lamil Project, located in between the major mining operations of the Nifty Cu mine and the large Telfer Au-Cu mine within the Paterson Province, East Pilbara, Western Australia.

RTR recently raised $1.5 million via the issue of 27,496,455 fully paid ordinary shares at 5.5c per share so they do have some cash in the bank but clearly not enough to advance the Lamil Project, so it's no surprise that a farm in/joint venture has been announced.

The Lamil Project appears to have a lot of potential and has resemblances to Newcrest's Telfer Mine. 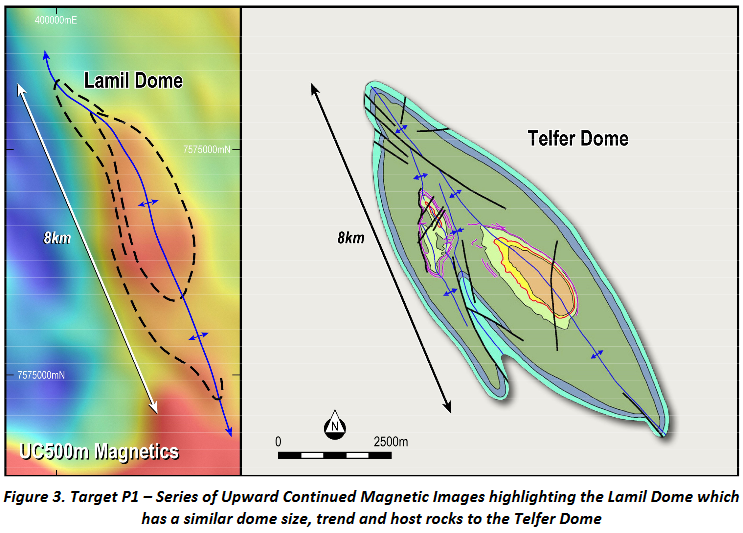 It's early stage but this is one to keep an eye on, especially as Josef El-Raghy is a company Director at AIC Mines. They have signed up for this join venture with RTR for a reason and I suspect that the Lamil Project might turn out to be a huge deposit down the track.

RTR bucking the trend today after announcing that it has signed a binding option agreement to acquire 100% of the Western Queen Gold Project from Ramelius Resources Ltd (RMS).

The Western Queen Gold project lies 110km NW of Mt Magnet within the Yalgoo Mineral field of Western Australia and comprises of two contiguous mining leases (M59/45 and M59/208) for a total area of 9.8 km². The Project is located within a 100km radius of three operating gold processing mills.

For more information, I recommend reviewing the announcement.

Gold is the one of the few bright spots in the investment world at the moment so it was fortunate the announcement was released today after last night's carnage on overseas markets.

The company announced this morning that it has received binding commitments from professional and sophisticated investors for a capital raising of $3,750,000 by way of the issue of 50,000,000 new fully paid ordinary shares at 7.5c per share. The strategic placement was underpinned by two new cornerstone investors, the Copulos Group, and a principal of Bennelong Asset Management.

Also in today's announcement the company identified nine near term catalysts that should keep the news flow coming: 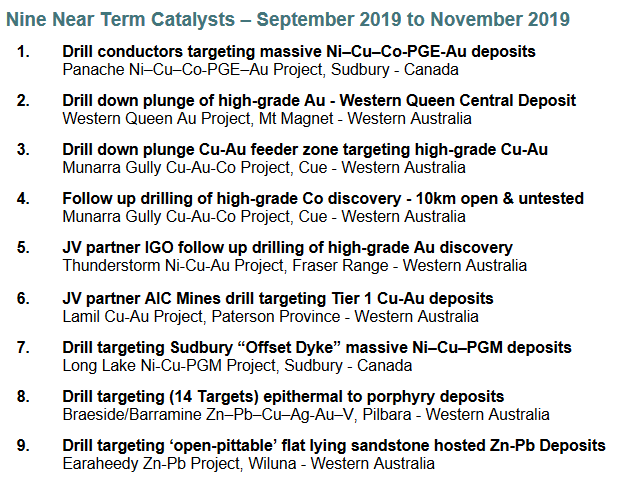 Rumble Resources is definitely one to watch during the next few months.


Thanks for the heads up Greg .... Might even close a bit higher by the looks. On to the research list

Announced six million dollars raised this week in oversubscribed capital raising at 9.3cents.
It puts another 65million shares into the market with now approximately half a billion on issue.
Now has three drill rigs currently operating in WA with 12,000 metres of drilling under way in an area that could provide another Telfer.
Closed up 3cents to 14cents on Friday, has been moving up from a mid March 4.5cents.

RTR in a trading halt this morning "in respect of an exploration update and a response to an ASX price query."

I think it's likely to be regarding the Munara Gully Project, but I could be wrong. In any case, the share price has jumped 28.6% today, so it looks like good news. 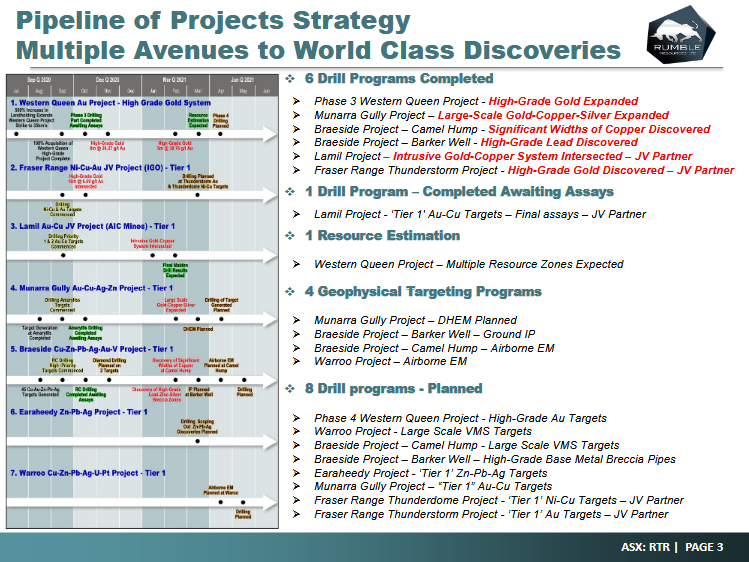 The response to the ASX price query was as follows:


The announcement expanded on that by saying:

At the Chinook Prospect, visual inspection of the drill holes completed has shown continuity of the sandstone hosted Zn-Pb mineralization which supports the scale potential at the prospect (previously set out in the announcement dated 25 March 2021) and has warranted the drill program to be expanded to 4000m. Rumble has sent 4 holes to the assay lab to be fast tracked through processing to give the Company an understanding of grades. These results are expected sometime next week. The remaining drill program is expected to finish later in the month of April, with assays to follow.

Rumble has also booked in a diamond drill rig to follow up this RC drill program in late April.
Click to expand...


So things looking promising at the Earaheedy Project for RTR. Those assay results due next week will be interesting.

Rumble in trading halt announced after market closed.
Trading to commence Monday 19th on market open or possibly earlier.
Looks like the latest drilling might be in the money.

brerwallabi said:
Rumble in trading halt announced after market closed.
Trading to commence Monday 19th on market open or possibly earlier.
Looks like the latest drilling might be in the money.
Click to expand... 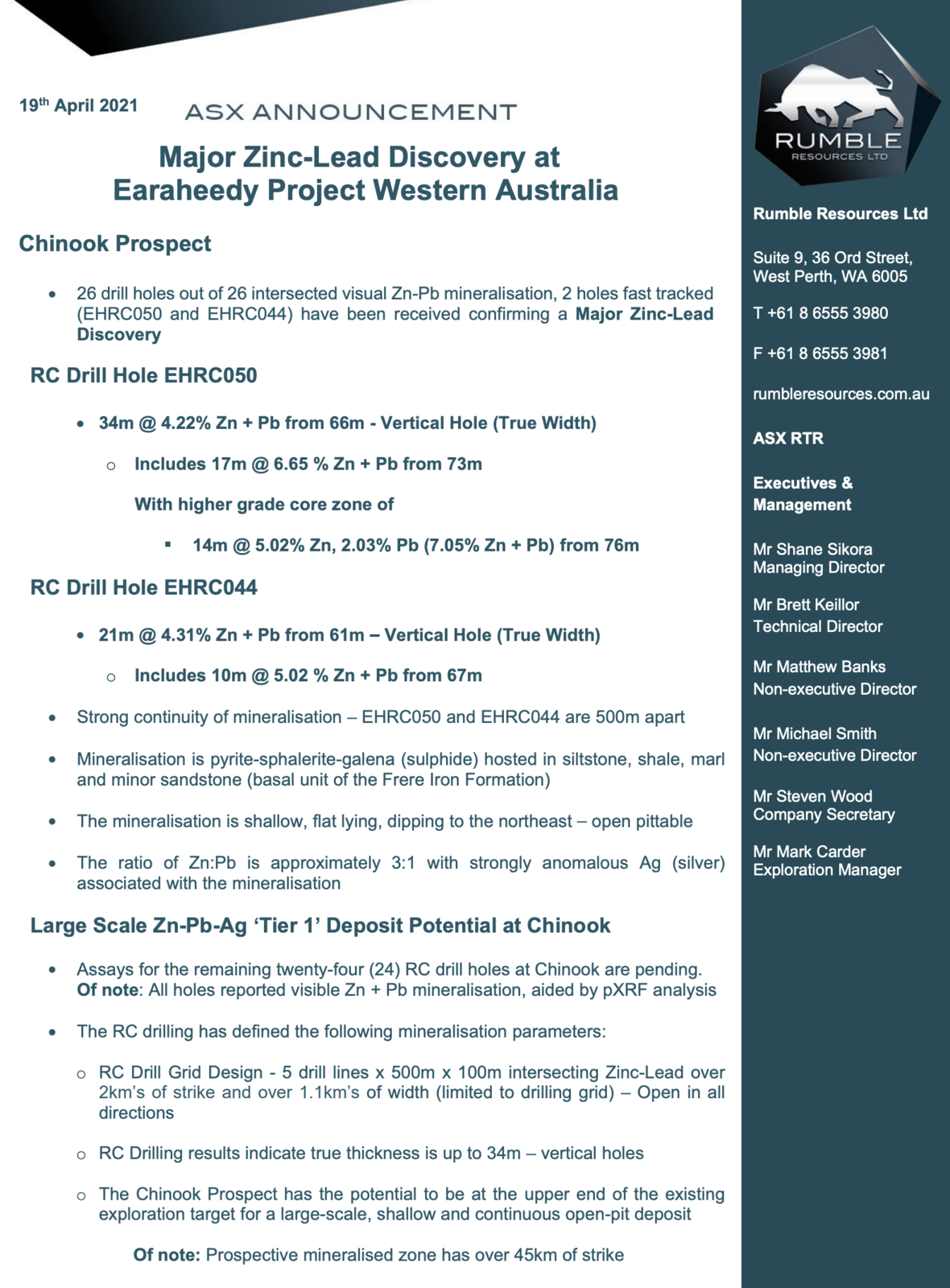 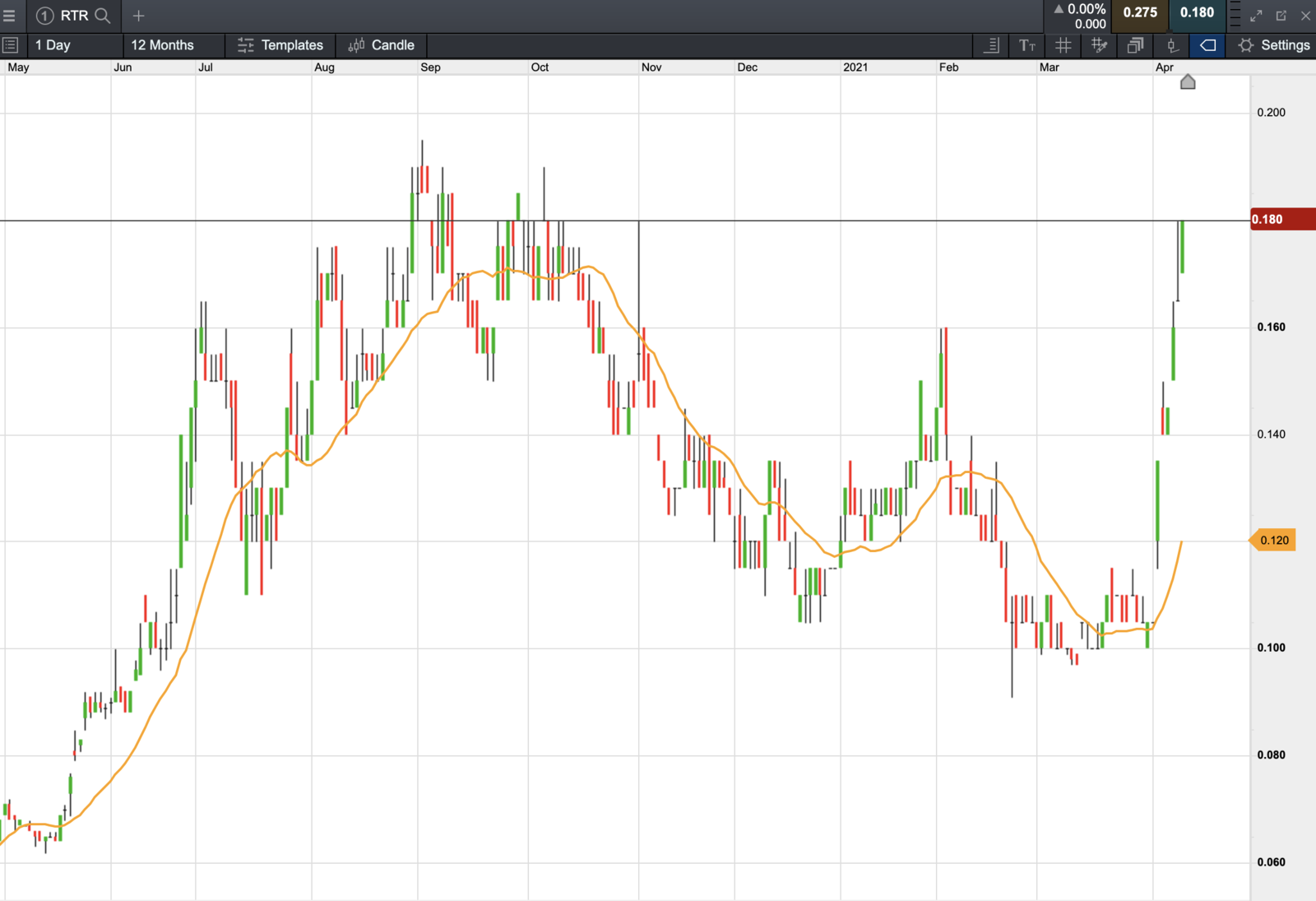 This is a great result for RTR. Wide intersections and good grades, not to mention the prospective mineralised zone has over 45km of strike.

This could be a monster but we won't know for some time. Management has said that extensive drilling of the area is expected to span the next 12 months, so a lot more work to be done.

It's early days, but if the good drilling results keep coming in, today's prices could look like a bargain this time next year.

greggles said:
It's early days, but if the good drilling results keep coming in, today's prices could look like a bargain this time next year.
Click to expand...


Looks like it could be a massive resource. Getting in at 15c might have been a master stroke. Up 100% and climbing.

To say this has been re-rated is an understatement. I thought after that huge rush it would fall over. But, the punters have just kept buying. Perhaps not punters but big boys recognising the future potential. I certainly underestimated what 30m @ 4-5% Zn+Pb meant.

Should have had this in the April stock pick comp... 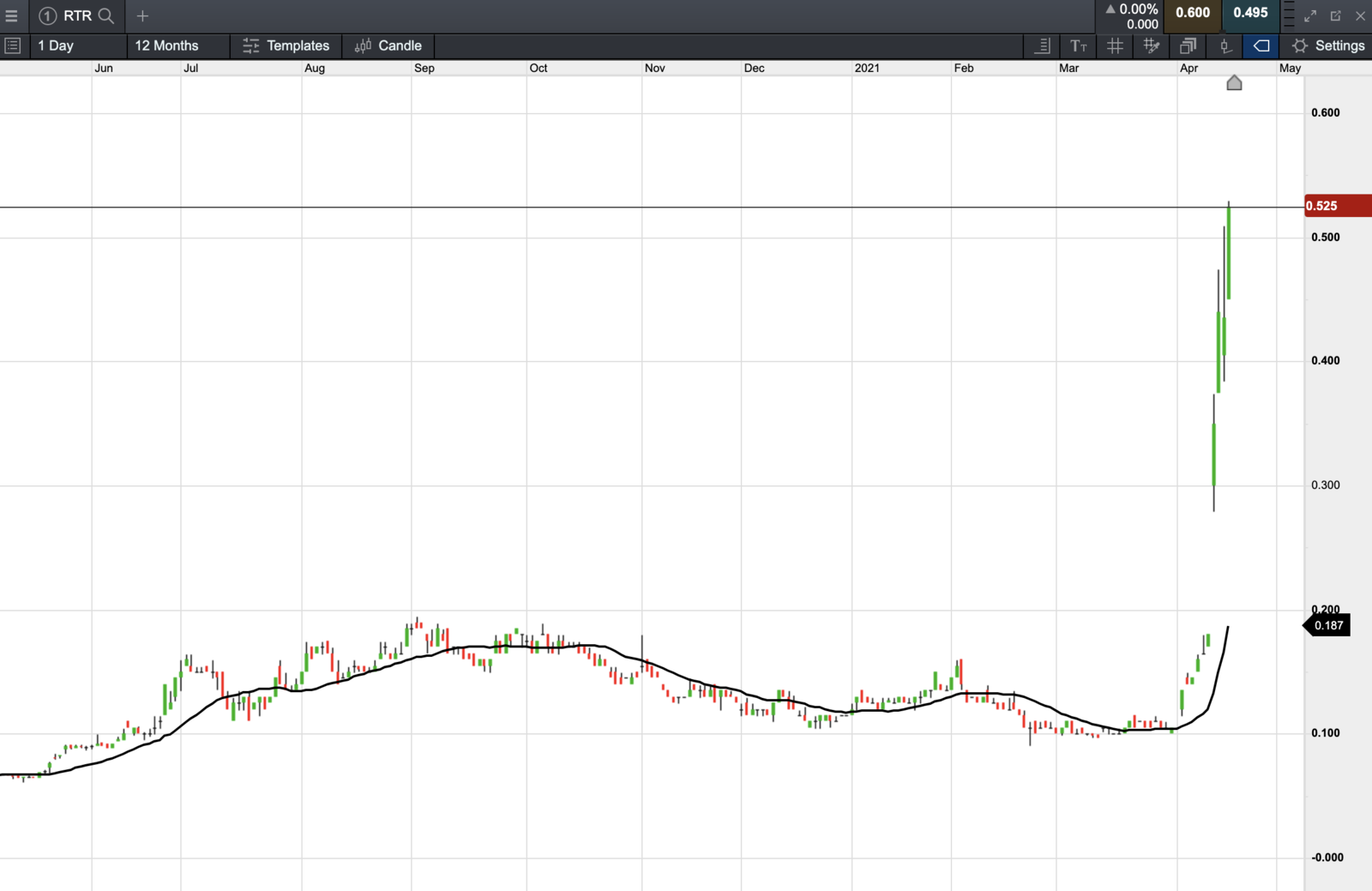 Went into TH for a CR yesty. Pretty opportunistic but they did only have about $4m in the bank. Now at .55c after several big green days. I thought the traders would have jumped off and it take a break but no such thing. Maybe when it comes out of this TH it settles down..

kennas said:
Went into TH for a CR yesty. Pretty opportunistic but they did only have about $4m in the bank. Now at .55c after several big green days. I thought the traders would have jumped off and it take a break but no such thing. Maybe when it comes out of this TH it settles down..
Click to expand...


Rumble Resources raising $40,200,000 (before costs) via the issue of 80,400,000 new fully paid ordinary shares at 50c per share. Great job by management to take advantage of the recent share price increase to raise capital at a much higher price and minimise dilution for existing shareholders. I wish all companies had that kind of responsible attitude to capital management.

greggles said:
The CR news has boosted the share price this morning, up another 15.5% to 63.5c.
Click to expand...


And I expected punters to take profit. Derrr. Not seen anything like this in a long time. There's obviously some very high expectations of this Earaheedy thingy.

Maybe BHP are buying it. 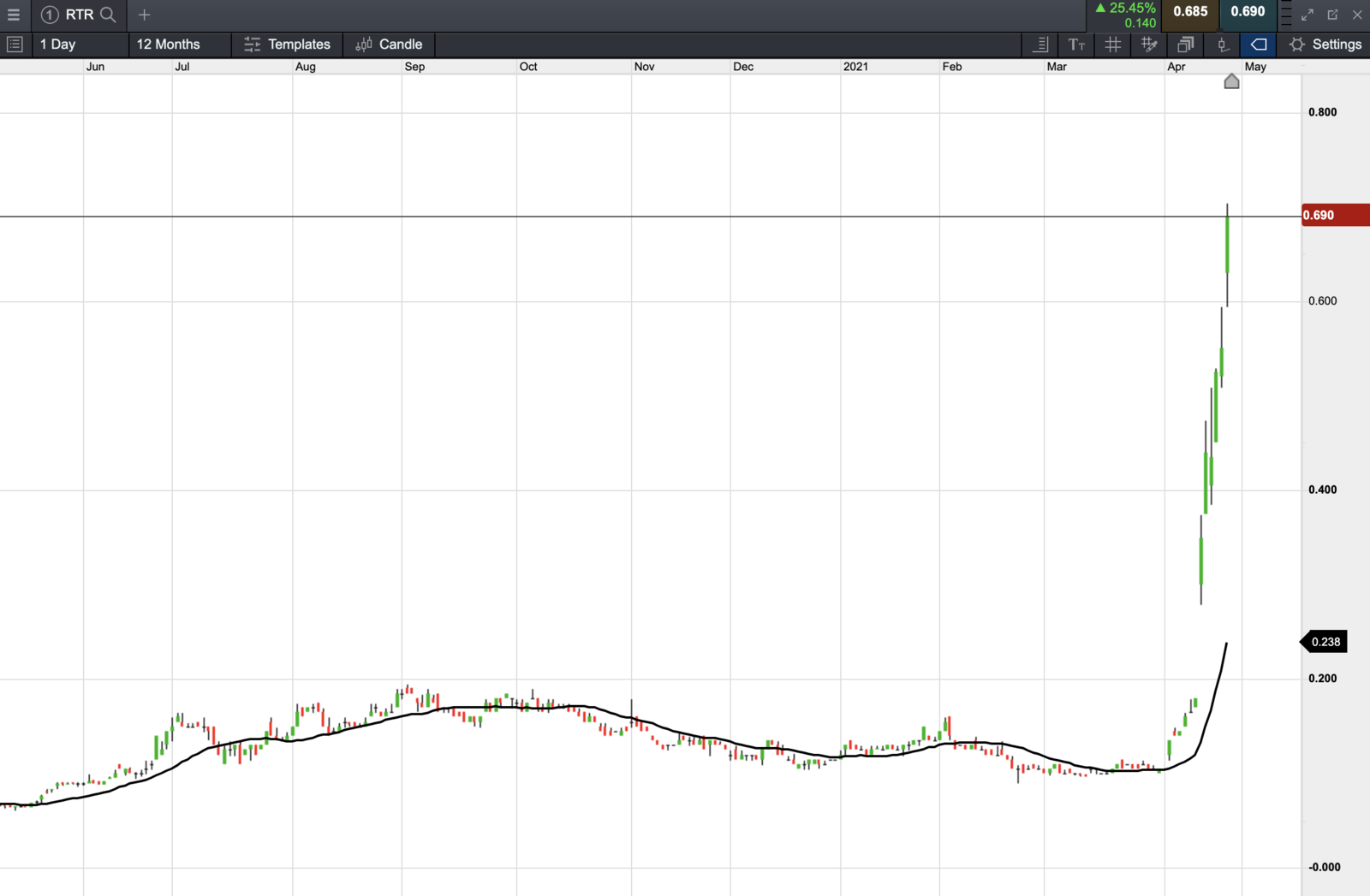