The Company's primary asset is the Copahue Geothermal Project in Argentina where it has signed a Heads of Agreement to farm-in and joint venture with Geothermal One Inc., a private Canadian company where Earth heat has the opportunity to earn up to 87.5% of the project through development funding.

Previous discussion of this company can be found in the FRV thread: https://www.aussiestockforums.com/forums/showthread.php?t=3091
E

Has anyone checked the valuation for this stock out? B/W 36c to 96c. I has a quick look of its recent announcements, and I feel this one should be the good for grab a few parcels for holding purpose.
T

Out of the renewable and ‘green’ energy companies on the ASX, this is one that grabbed my attention.

I am quite interested in the whole renewable energy sector, both from an investment potential and personal curiosity point of view. While I believe that more sustainable energy solutions are necessary (and possibly inevitable in the distant future) it is a difficult environment for most companies to turn a significant profit in the current market. While a lot of the other green energy companies I looked at were relying on technological advancement, public grants and a major shift in Aus & world energy markets, I got the feeling that EHR has the potential to profit in the current environment.

Their Copahue, Argentina geothermal project is looking good with a recent upgrade to resource, an EIA and Concept Study completed. There are still a few years until they are expecting power generation (and revenue) but it’s an interesting project. They also have exposure to African and Australian markets and are not limiting themselves to renewable energy options with coal bed methane interests in South Australia.

While I always read valuations with a hefty dose of salt, they have been given a price target of above 20c by RB Milestone and 30-70c by Arrowhead. These are probably a little generous but I do believe they have a significantly lower risk profile compared to other geothermal and renewable plays.

This (and possibly CWE if they can get a commercial project up and running) is currently the ‘green’ play in my portfolio, and one I am keenly following for news while they develop their projects.

I’d be interested to see anyone else’s opinion of EHR or a comparison to other ‘new/green/renewable’ energy companies (particularly geothermals)???

Best geothermal on the ASX with a great management team who are ticking all the boxes. Risk profile is diverse with projects in Australia, North Africa and Argentina. This will be the first geothermal on the ASX to generate an income stream from the Copahue project in Argentina. Forecast is $33m per annum (based on last annual report). Current sp is very cheap when you compare to valuations by Proactive Investors of $0.36 - $0.96.
C

Latest investor presentation looks very good. The comparison between ASX geotherms makes EHR look like the pick of the bunch at a very cheap price.
1

Background and Updates on EHR can be found here:

I would have thought the announcement about the pending agreement with xstrata would have given the stock price and volume a bit more of a workout than it did...
C

AllAussie, looks to me like geothermal is out of favour with investors at the moment. However, it is good to know that Torey is doing something about the flagging equity values. Yesterday's announcement gave a clear indication that something will be done to bring on a re-rate of the share price in order to fix the "chronic disconnect" between project value and market capitalisation. Completion of the $30m capital raising should also help things along.


cjlcowled said:
AllAussie, looks to me like geothermal is out of favour with investors at the moment
Click to expand...

Hit the nail on the head. Have a look at the 3 year charts for all the geothermal stocks. One or 2 were trading at $1+, now trading sub 10c.
You will have to be either really convinced about the technology, or really patient.

Can't see a caralyst in the near future to spark geothermals across the board.

Earth Heat to raise up to US$30m and purchase Geothermal One Inc
Earth Heat announce that it has appointed CIFI (Corporaciόn Interamericana para el Financiamiento de Infraestructura, S.A.) as its financial advisor for a US$30m equity capital raising as part of its development funding of the Copahue Geothermal Project.
Additionally the company has executed a Heads of Agreement to acquire the issued capital of Geothermal One Inc, its Joint Venture partner for CAD$6m in cash or shares minus agreed expenses . EHR shares are deemed to have a face value of 10cps if that option is elected by any individual shareholder of Geothermal One Inc.
The acquisition will be completed contingent on the close of the capital raising.

About Copahue
Earth Heat signed a Heads of Agreement to farm-in to the Copahue Geothermal Development Project in Argentina in May 2010, which comprises an identified initial 30 MW geothermal development with the potential for significant expansion. Development of Copahue is anticipated to provide first power production and revenue within four years and Earth Heat has the right to earn up to 87.5% of the Project by funding various stages of development.
The Copahue project area is located in the western part of NeuquÃ©n Province, approximately 300 km from the provincial capital and just a few kilometres from the Chilean border. The geothermal resource on which the project is based occurs on the North-East flank of the Copahue volcano a young, historically active stratovolcano whose summit is on the international border. It is also situated within a broad caldera that is inferred to have formed by activity that pre-dates that of the Copahue volcano.
The project area has been the site of geothermal exploration and development activities since the 1970s. This work has included a number of superficial and shallow exploratory surveys (geology, geochemistry, geophysics and temperature gradient drilling).
Four deep wells, reaching depths of as much as 1,414m have also been drilled in the area. These wells have demonstrated the presence of a commercially exploitable, vapor-dominated geothermal reservoir within at least a part of the project area.
EHR has increased the resources by 150%, completed an EIA, a pre-feasibility study and most recently signed Letters of Intent for offtake of the power to be produced well in excess of stage 1 and 2 development.

RDT looks like a gem of a company.
Alaskan oil and gas with $50m government funding I can't think of any other small cap with that kind of deal.


Paavfc said:
RDT looks like a gem of a company. Alaskan oil and gas with $50m government funding I can't think of any other small cap with that kind of deal. Watch this space!!!!
Click to expand...

I would say all parties are pretty confident to execute this kind of funding...

The only positive I can see is that volume has picked up over the past 5 or 6 months but it is still extremely low and illiquid. Gamblers only for this one at the moment going by the chart. You could strike it lucky...or it could go under!!

Seems low risk compared with many a spec play.

Pilot Energy hit with a please explain by the ASX today over an increase in its share price from 2.9c on Friday to 4.9c today. It has since fallen back to 3.9c. Volume much higher than usual.

As expected, the company stated in its reply that it has no explanation for the recent trading in its securities. Some news around the corner? 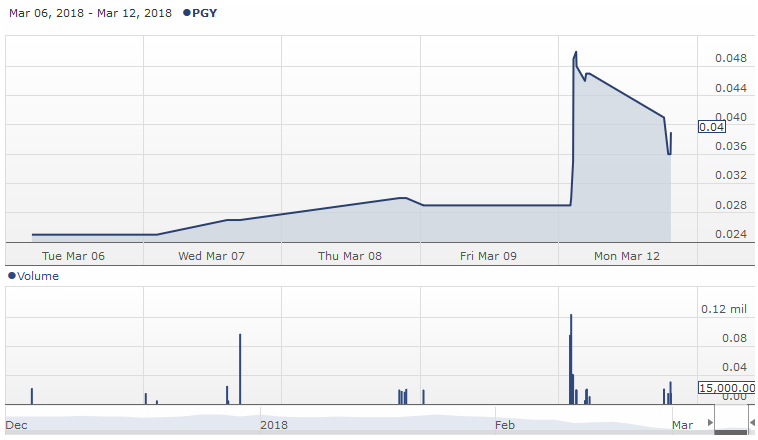 PGY up from 2.1c on 29 August to a high of 8.5c today on no news except for the company's response to an ASX Price and Volume Query released on 30 August: