Jump to new
I

NickyDee said:
Its a good project but highly dependent on other parties financing it. 'Toss of a coin' since it seems the project is not inherently bankable (such as say a copper deposit of the same quality). I hope it goes well.
Click to expand...


Interesting comment NickyDee. Why do you think it is not inherently bankable? The NPV from the PFS came up with a figure many times the company's market cap (about $1.3bn vs about $27m if I recollect).

Strong volume and a big move north for Peak Resources in the last couple of days.

There has been no news recently but in a response to an ASX Price and Volume Query dated yesterday the company attributed the unusual trading to the following:

The Company is aware of the recent increase in rare earth prices quoted out of China, which have indicated an increase of approximately 27% in the Chinese Domestic NdPr oxide price in the last 14 days. PEK's 75% owned Ngualla Rare Earth Project (‘Project’) is one of the largest and highest grade undeveloped rare earth deposits with approximately 90% of its projected revenue expected to be attributable to NdPr oxide. Consequently any increase in NdPr price will therefore have a direct impact on the economics and potential returns of the Project.

Another development currently impacting the rare earth industry is the intensifying trade war between the USA and China. This has recently been widely reported by a number of media outlets. As part of potential retaliation by China to the USA government over its increased tariffs, it was reported on 28 May 2019 in the Chinese tabloid, Global Times that China is seriously considering limiting rare earth exports to the United States. People familiar with the rare earth market will recall that it was a threat to restrict rare earth exports to Japan in 2010 that saw the price of NdPr oxide increase significantly at that time. It should be made clear that the Company is not aware of any official statement by the Chinese Government confirming the report made by the Global Times.
Click to expand...


I have also been reading elsewhere that the Tanzanian Mining Commission has just approved 7000 out of 8000 mining license applications, so there is speculation that PEK is one of those that has received approval.

Technically it looks like PEK has just broken the daily chart cup and handle resistance point and has pushed to new 52 week highs. We might get some consolidation above 5c until there is another catalyst to push it one way or the other.

PEK has taken off, since the last post. Was 4c in Oct, made it to 12c by Feb and now just under 10c. Interesting as a Rare Earths hopeful, there isn't much mention of it, or excitement.
.. The Ngualla Project, located in Tanzania, has existing JORC Compliant Reserves of 18.5 mt at 4.8% Rare Earth Oxide equating to 887,000t contained REO. ... but that was the case in 2017.

But then, Africa is a tricky place to operate. Putting generalisations aside, the Tanzanian President passed away last week, which may well slow the process of getting stuff done.

PEK has a massive JORC'd rare earths deposit in Tanzania, and has already completed pilot testing of the separation plant successfully. The delay has been in getting the Special Mining License issued by the government.
Last week President Magufuli unfortunately passed away from heart complications (may have been Covid related). His VP Samia Suluhu Hassan has now been sworn in as President (their first female one) and we know she mentioned when she gave an address at the recent Tanzanian Mining Conference that two companies were about to be granted SML's. These two companies we know are PEK and ORR. She is pro-business apparently and the country badly needs new sources of revenue, so these two good-sized mines will really help in this respect as the government effectively ends up with near 50% of the taxable income taking into account royalties, income tax, and their free-carried share assuming dividends will be paid.
Click to expand...


It would appear that the SML will be issued very soon, and that PEK's share price can accordingly be expected to re-rate. I'm not sure how the market will treat sovereign risk (Tanzania is 94= in the Corruption Perceptions Index ie middle of the pack) but it could be that 30-45c may be possible which is around $A500M MC. Compare to Pensana which has the big rare earths deposit in Angola at a similar stage of development (142 in the Corruption Perceptions Index) at $A612M.
Click to expand... 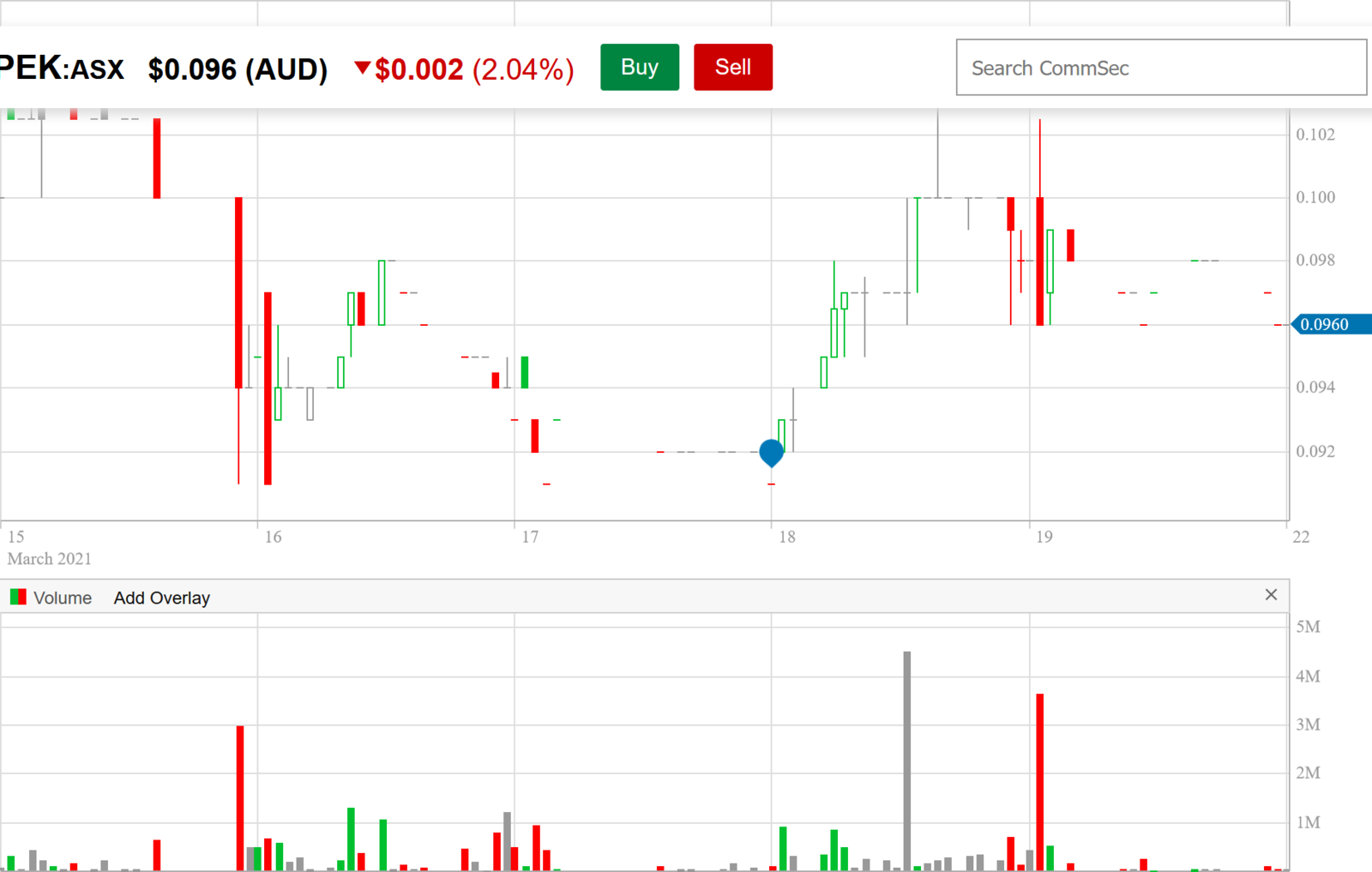 Peak Resources up 15.3% this morning after this curious announcement:

Peak Resources Limited (ASXEK) (“Peak”or the“Company”) attended a meeting between the United Republic of Tanzania Ministry of Minerals and the Tanzania Chamber of Mines on the evening (AEST) of Wednesday,12 May 2021.

During the meeting, which was attended by industry participants and members of the media, the Hon. Dotto Biteko (MP), Minister for Minerals of the United Republic of Tanzania, made the following comment:

“We will issue a second SML with investment of over US$100 million to PR NG Minerals Ltd, which will mine rare earths in Ngualla Songwe...”

PR NG Minerals Ltd is the wholly owned subsidiary of Peak that applied for a Special Mining Licence (“SML”) for the Ngualla Rare Earth Project, which is located within the Songwe Region of Tanzania.

Peak is aware of speculation that a recent meeting of the Cabinet of Ministers of the Government of the United Republic of Tanzania (the “Cabinet”) may have considered the approval of PR NG Minerals' SML application. However, whilst Peak understands that a meeting of Cabinet was held, Peak has not received any official confirmation that the approval of the SML was considered by Cabinet at that meeting, or if it was considered, the status of its SML application.
Click to expand...


Well now that he has said it, it's going to be hard to take it back... although Africa is a strange place so who knows? Anyway, I guess we can assume for the moment that PEK will receive a SML to mine rare earths in Tanzania.

If so, and the SML is confirmed officially, it is good news for the company.

greggles said:
Peak Resources up 15.3% this morning after this curious announcement:

Well now that he has said it, it's going to be hard to take it back... although Africa is a strange place so who knows? Anyway, I guess we can assume for the moment that PEK will receive a SML to mine rare earths in Tanzania.

If so, and the SML is confirmed officially, it is good news for the company.
Click to expand...

PEK trade to watch for the long term future in tech and low carbon energy. check out the vidio link @ there web site, (powerful). I Like!!

greggles said:
Peak Resources up 15.3% this morning after this curious announcement:

Well now that he has said it, it's going to be hard to take it back... although Africa is a strange place so who knows? Anyway, I guess we can assume for the moment that PEK will receive a SML to mine rare earths in Tanzania.

If so, and the SML is confirmed officially, it is good news for the company.
Click to expand...

I note on the second page of today's Ann. the following:-

The SML is the final major regulatory requirement for the Project.
Once approved, the Company will be able to negotiate an Economic Framework Agreement for the project with the Tanzanian Government, including the form and nature of the Government’s free carried interest.

Well done to the T Gov for seeing the potential

From an Investor point of view, dig deep!

: PEK's board of directors are not considered experienced ( 0.6 years average tenure), which suggests a new board.
Interesting to how it travels on the back of yesterdays announcement,' next week.

PEK resources to bonce back. there not out of the woods yet, but i sense there back in bat and putting it to work. Heaps of runs to be had here...

Stockybailz said:
PEK resources to bonce back. there not out of the woods yet, but i sense there back in bat and putting it to work. Heaps of runs to be had here...
Click to expand...

PEK rock steady this morning up 16% no announcement, little volume...

www.peakresources.com.au 250-year Lease Executed over the Teesside Rare Earth Refinery Site Further to its announcement on 28 May 2021 (“Exercise of Option over Teesside Rare Earth Refinery Site”), Peak Resources Limited (ASXEK) (“Peak”or the“Company”)is pleased to announce that following service of the notice to exercise its option for a 250-year lease from Homes England over a 19-hectare parcel of land within the Wilton International Site, and payment of theGBP1,858,712purchase price, the lease has been executed by the parties.

Waiting for this one to fill the gap...
Had some success trading this one late last year, but revisiting the chart, the success was nothing considering the SP gains since then.
Have looked for a rare earths concentrated ETF on the ASX, but doesn't seem to be one?
(ETF VanEck REMX in the US may be considered, however the chart may be getting ahead of itself, top of the cycle?.) 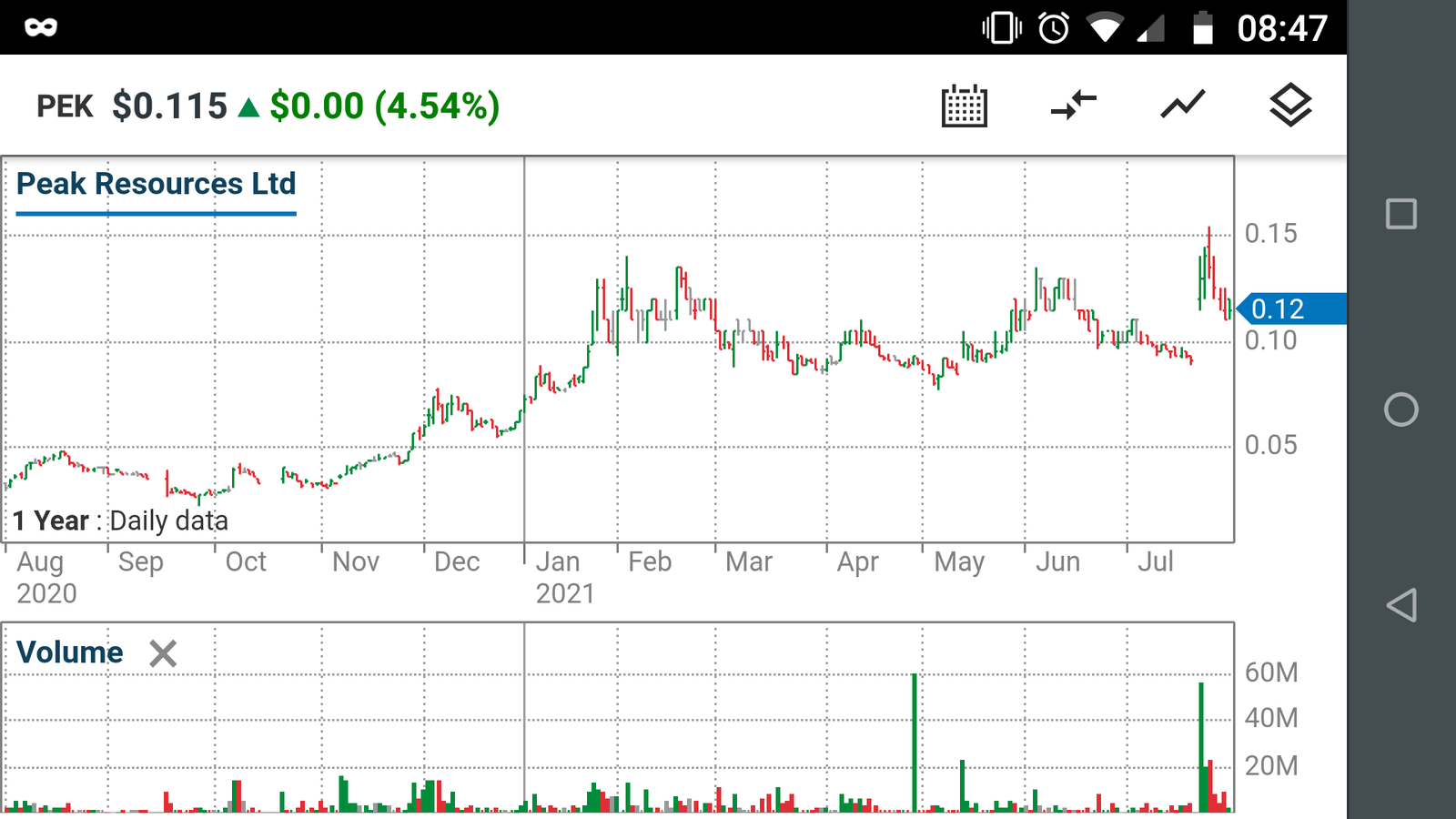 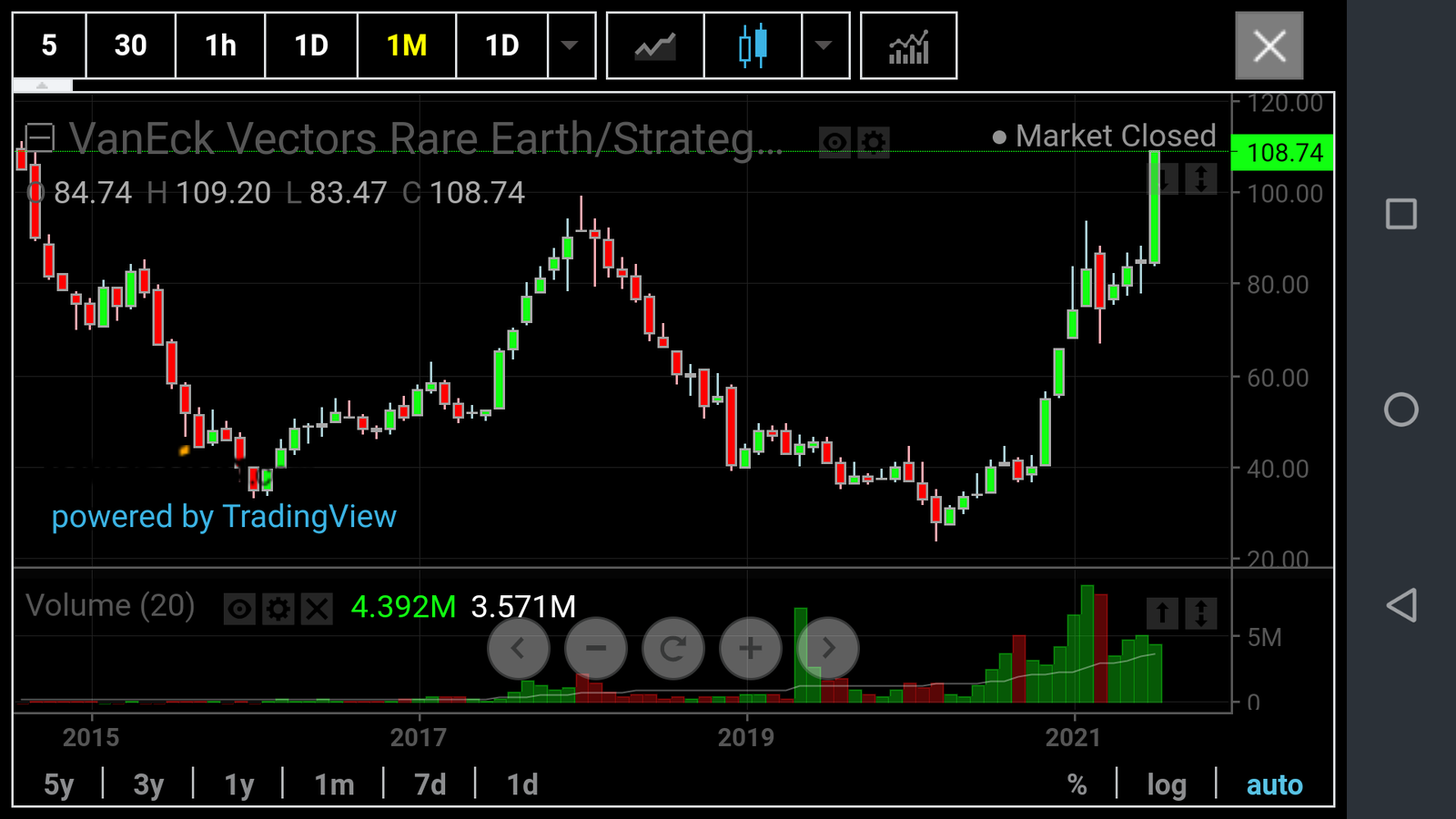 going to the market

Peak Resources is in the market raising $29 million to fund an updated banking feasibility study, as well as early works on its Ngualla Project in Tanzania.

Peak received regulatory approval from the Tanzanian government for a mining licence for the neodymium and praseodymium rare earth project last month.

The offer comes in the form of a two-tranche placement of approximately 277.8 million shares priced at 9¢ - an 18.2 per cent discount to the last trading price - totalling $25 million. Plus, a $4 million share purchase plan for retail investors.

frugal.rock said:
Waiting for this one to fill the gap...
Click to expand...

Dona Ferentes said:
going to the market
Click to expand...

And that will fill the gap...
Thanks Dona.

frugal.rock said:
And that will fill the gap...
Click to expand...


I looked at your chart and thought exactly that

Dona Ferentes said:
I looked at your chart and thought exactly that
Click to expand...

Got the spp paper in the mail yesterday 9c is higher than Average price in the last month..wondeeing if i should buy some on market..or just forget it altogether as i doubt it will go much above 9c in the near term