Predictive Discovery Limited (PDI) is a gold and uranium exploration company with projects in Burkina Faso (West Africa) and Australia.

PDI is one to be looked at for the pedigree of its directors alone.

Cape Clear Joint Venture
PDI entered into a modest joint venture agreement during the Quarter on an Exploration Licence (EL4691 – Cape Clear) near its Skipton EL. The agreement was signed with Leviathan Resources Pty Ltd, a subsidiary of AuRico Gold Inc. Under the terms of this agreement, PDI may obtain a 100% interest in the EL by expenditure of $500,000. The vendor will receive a 1.5% royalty if a decision to mine is made. The minimum expenditure before withdrawal is $70,000.
The target is a large Stawell type gold mineralised system, as at Skipton. The area is of interest because it contains:
• Widespread alluvial and primary gold workings
• Evidence of Cambrian basalt domes (similar to those at Stawell), concealed below cover
• It is at the intersection between two very major structures
• Very little modern exploration has been carried out in the areas which PDI is targeting.

Cote D’Ivoire
Predictive Discovery Limited announces that it has signed an agreement for the acquisition of a
gold exploration permit in Cote D’Ivoire, known as Komboro (subject to grant). Under the terms of the
agreement, PDI may earn up to a 90% interest in the permit.
While Predictive Discovery is taking this initial step into Cote D’Ivoire, its primary focus remains on the
Bonsiega and Bangaba Projects in eastern Burkina Faso, where ongoing drilling programs continue to
make promising new gold discoveries.

The project is located in the north of Cote D’Ivoire with an area of 169 km². It covers part of a greenstone belt containing active artisanal workings and extensive gold geochemical anomalies. The project holder has reported a series of high grade values ranging up to 52g/t Au from reconnaissance soil and bedrock sampling, however, as far as PDI is aware, the area has not been drill tested.

What do we think gold bugs? In my LLP thread.

springhill said:
...
What do we think gold bugs? In my LLP thread.
Click to expand...

Predictive Discovery announce that it has signed an agreement with Stratos Resources, enabling PDI to move to 100% ownership of the four Burkina Faso permits that constitute the ElDore Joint Venture. These permits cover 621km² and include the Laterite Hill Gold Field, a 20km long zone of gold mineralisation, in which PDI has obtained excellent drill results over eight separate zones of gold mineralisation with a cumulative strike length of at least 8km to date.

This is an important strategic development for PDI in consolidating and simplifying the ownership of some of the key tenements in the Company’s extensive project portfolio.
SAT currently holds 27.9% of Birrimian Pty Ltd (“BPL”) the underlying owner of the four Joint Venture permits. PDI currently owns 72.1% of BPL. Subject to approval by an Extraordinary General Meeting of SAT shareholders, PDI will purchase SAT’s entire shareholding in BPL for the consideration of 13 million PDI shares. At the same time, SAT will make a cash payment to PDI of $140,000 in partial repayment of outstanding cash calls from the Joint Venture. Also, as part of this transaction, SAT and its Directors are contributing $160,000 to the shortfall in PDI’s recent entitlement issue which closed on 20th July 2012.

Other provisions of the agreement include:
□ SAT will be subject to a voluntary escrow agreement in relation to its PDI shares for 12 months after settlement.
□ SAT will have no further contribution obligations towards the ElDore Joint Venture and PDI will forgive all remaining outstanding Joint Venture payments owed by Stratos to PDI.
□ SAT and individuals or investment funds associated with that Company may contribute further to the PDI entitlement issue shortfall prior to the SAT Extraordinary General Meeting. If so, any contribution up to $140,000 will then be discounted from the $140,000 cash payment to PDI and the number of PDI shares issued under the agreement will be reduced by the value of that contribution, assuming an 8 cent PDI share price.

PDI are pulling impressive grades out of Bongou. It was one I used to keep a close eye on as having potential, but that all went by the wayside when work got busy. It did close up over 22% today and reached an intra day increase of 44%+

● The high grade zone is open to depth and may also plunge to the east.
● Lower grade gold mineralisation up to 20m in true width is found
consistently close to and south of the high grade gold zone.
● Gold mineralisation consists of an intensely silicified, quartz veined and pyritic microgranite. Recognition of the Bongou gold mineralisation style has opened up a large new area for exploration within the Bonsiega Gold Project permit group.
● Additional potential is indicated by:
o Intermittent granite outcrops through areas of extensive thin cover extending over at least 3km of strike around Bongou with two priority target areas identified nearby to the west and East.
o Two new target areas identified 4km and 10km north east of Bongou both on the 43km of Bongou fault strike within PDI’s exploration permits.
● Ongoing exploration program includes additional drilling, ground geophysics and geochemical drilling of nearby targets and preliminary metallurgical test work of gold mineralised RC samples.

Now, I am far from being a gold bug and different gold in differing mineralisation types are harder and more costly to extract than others.
Is this the case here or has the market not paid attention to the drill results?

The number of shares on issue is a borderline case where I say there are too many on issue to suit my system, yet the market cap is a paltry $10m. Around $2m of that is cash, if that cash figure was around the $5m mark I would be finding it hard to resist a short term speculative holding.
As I have been burnt by that back in the day, I have learnt to stick to my criteria. Doesn't mean this won't be a kicker, of course. It almost certainly guarantees it will!

Anyone who can shed light on the mineralisation type and the vagaries of extraction would be much appreciated.

Could a, should a... didn't.
From whoa, to Go!
Watched from the sidelines, all chicken like...

Anyone holding or held/ out today?
Awesome stuff if you do. 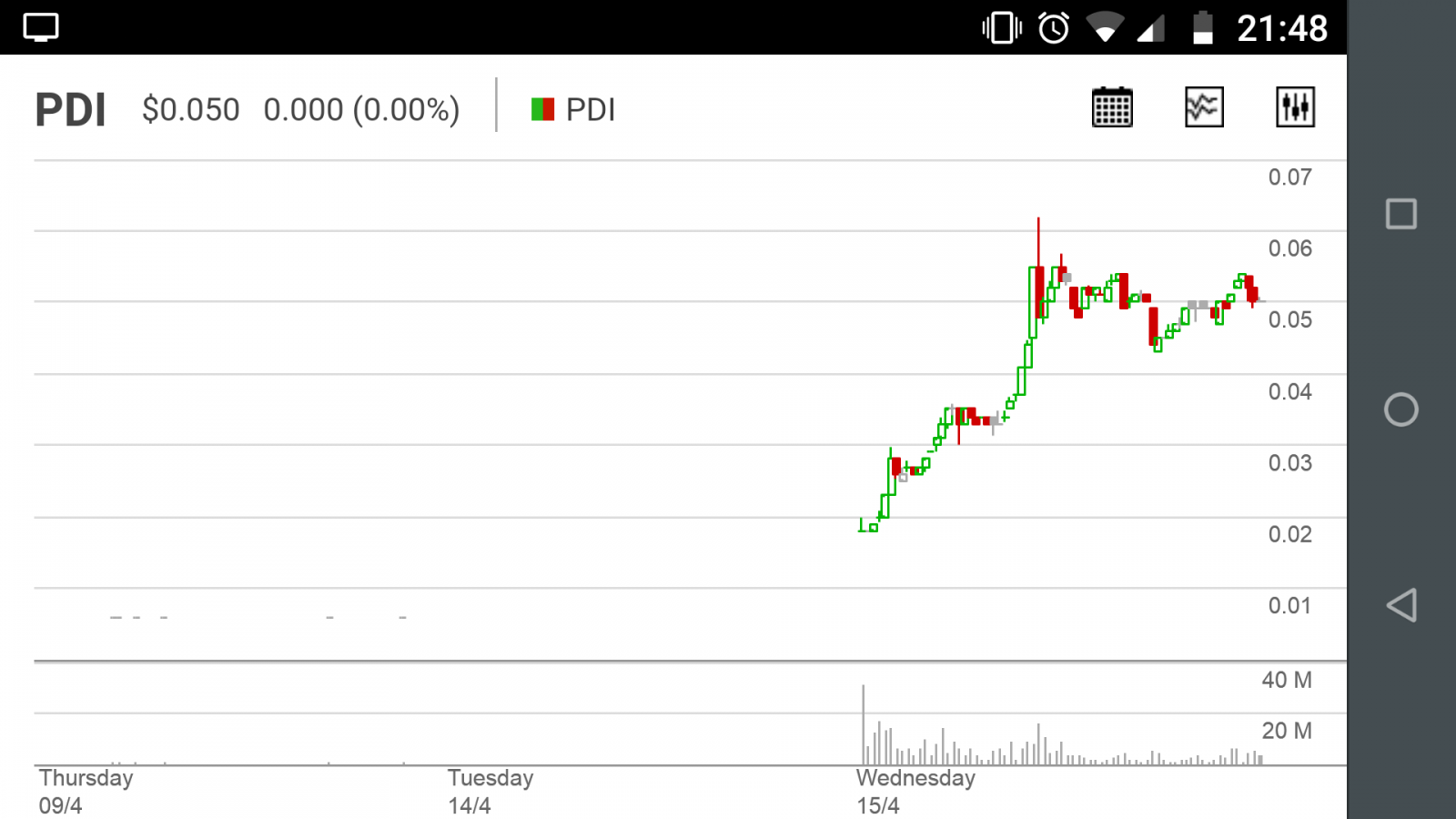 This thing is producing some decent intersections and grades. Any idea what happened in April last year? 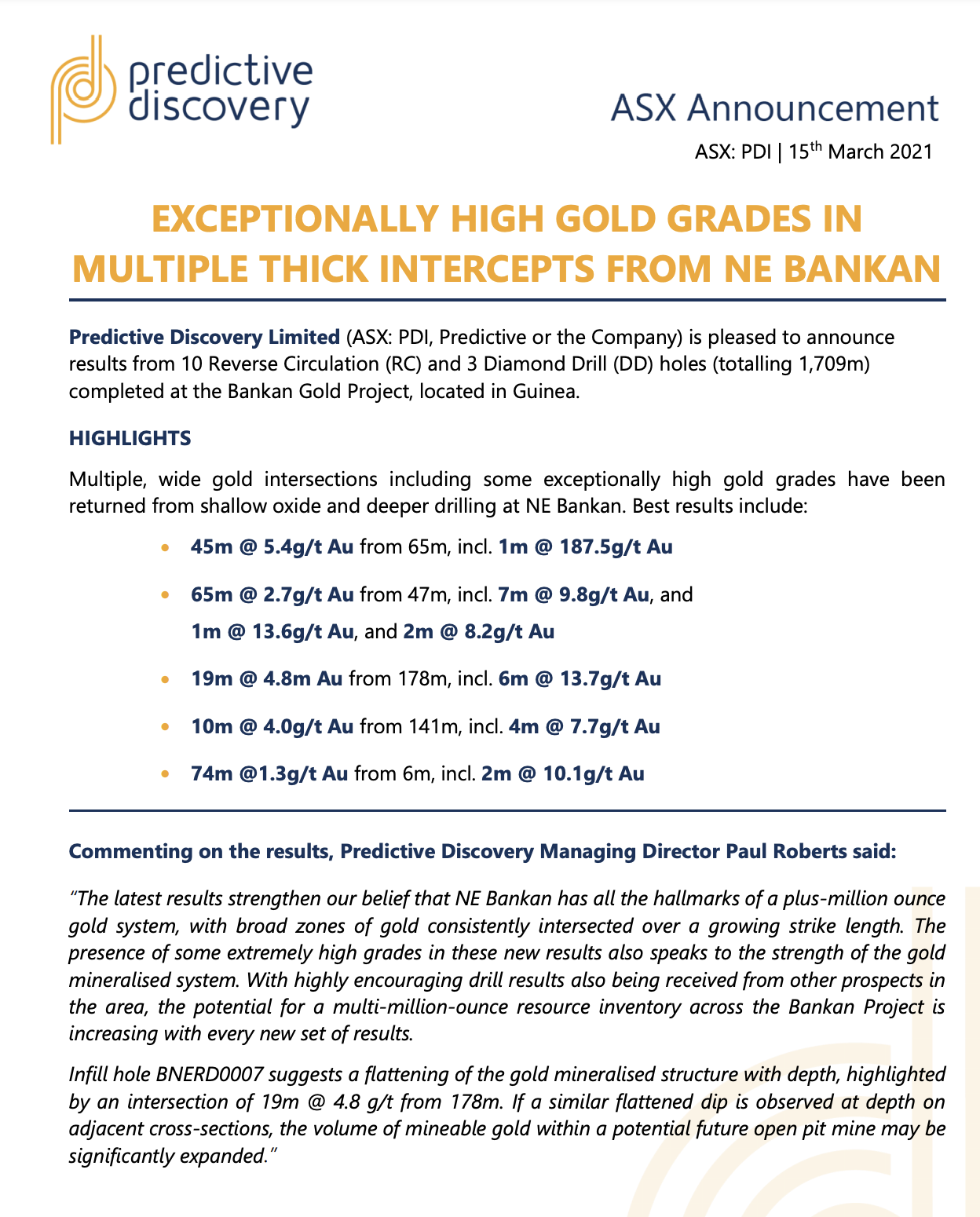 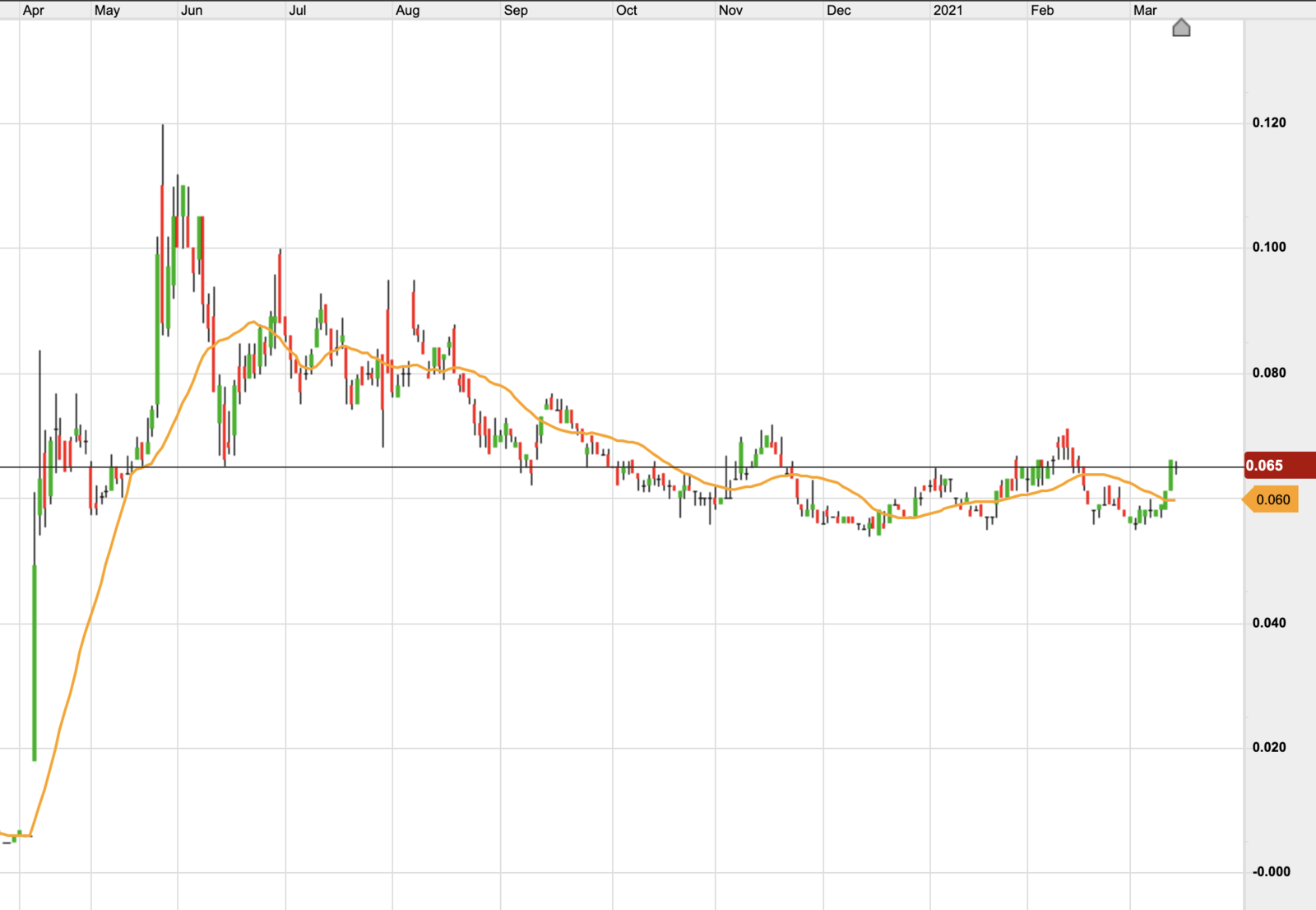 kennas said:
Any idea what happened in April last year?
Click to expand...


The timing of the share price spike in April 2020 seems to be as a result of the announcement released on 15 April concerning the discovery of a gold deposit at the Kaninko Gold Project in Guinea.

Since then the share price action hasn't been terribly exciting. It's been pretty flat for the last six months.

greggles said:
The timing of the share price spike in April 2020 seems to be as a result of the announcement released on 15 April concerning the discovery of a gold deposit at the Kaninko Gold Project in Guinea.

Since then the share price action hasn't been terribly exciting. It's been pretty flat for the last six months.
Click to expand...

Are they ramping it a bit claiming potential for a 'multi-million-ounce' resource?

The intersections are OK but doesn't scream multi million to me yet.

And they need to change their name, it's pretty lame.

"Following receipt of results from the ongoing RC and DD drilling program, infill drilling will be carried out to support the Maiden Resource Estimate planned for mid-2021. Metallurgical test work is scheduled to begin in April 2021.

In addition to the ongoing RC and Diamond drilling, power auger drilling has been in progress since October last year. The focus of the power auger is to search for gold mineralisation in the areas around Bankan West, Bankan Creek and NE Bankan. Once results from the recently completed aeromagnetic survey are assessed, auger programs will be extended further to the north and south in the search for new satellite gold discoveries."

kennas said:
And they need to change their name, it's pretty lame.
Click to expand...


Yeah tend to agree. Sounds more like a Bio-Tech Company

Pretty handy Grades in the Announcement with a mixture of wide and nuggety strikes.

+ $65 million Market Cap with around $13 million in the kitty at last December. Well placed for a Minnow

I no longer really look at mining companies who have flagship or major projects based in African countries. Aside from all the corruption, there is the constant risk of armed rebellions, civil wars, tribal conflicts and sudden changes in government that can threaten the viability of major projects.

I have seen too many African based mining projects go under in the past due to social and political instability in African countries. These days I only look at companies with major projects in politically stable countries.

greggles said:
I no longer really look at mining companies who have flagship or major projects based in African countries. Aside from all the corruption, there is the constant risk of armed rebellions, civil wars, tribal conflicts and sudden changes in government that can threaten the viability of major projects.

I have seen too many African based mining projects go under in the past due to social and political instability in African countries. These days I only look at companies with major projects in politically stable countries.
Click to expand...

I agree with this sentiment. There's tons of risk but I think a lot of that is factored into their SPs.

NE Banakan looks like it's turning into something. Still quite wide intersections and good grades at depth. Broken up since 14 Mar post. 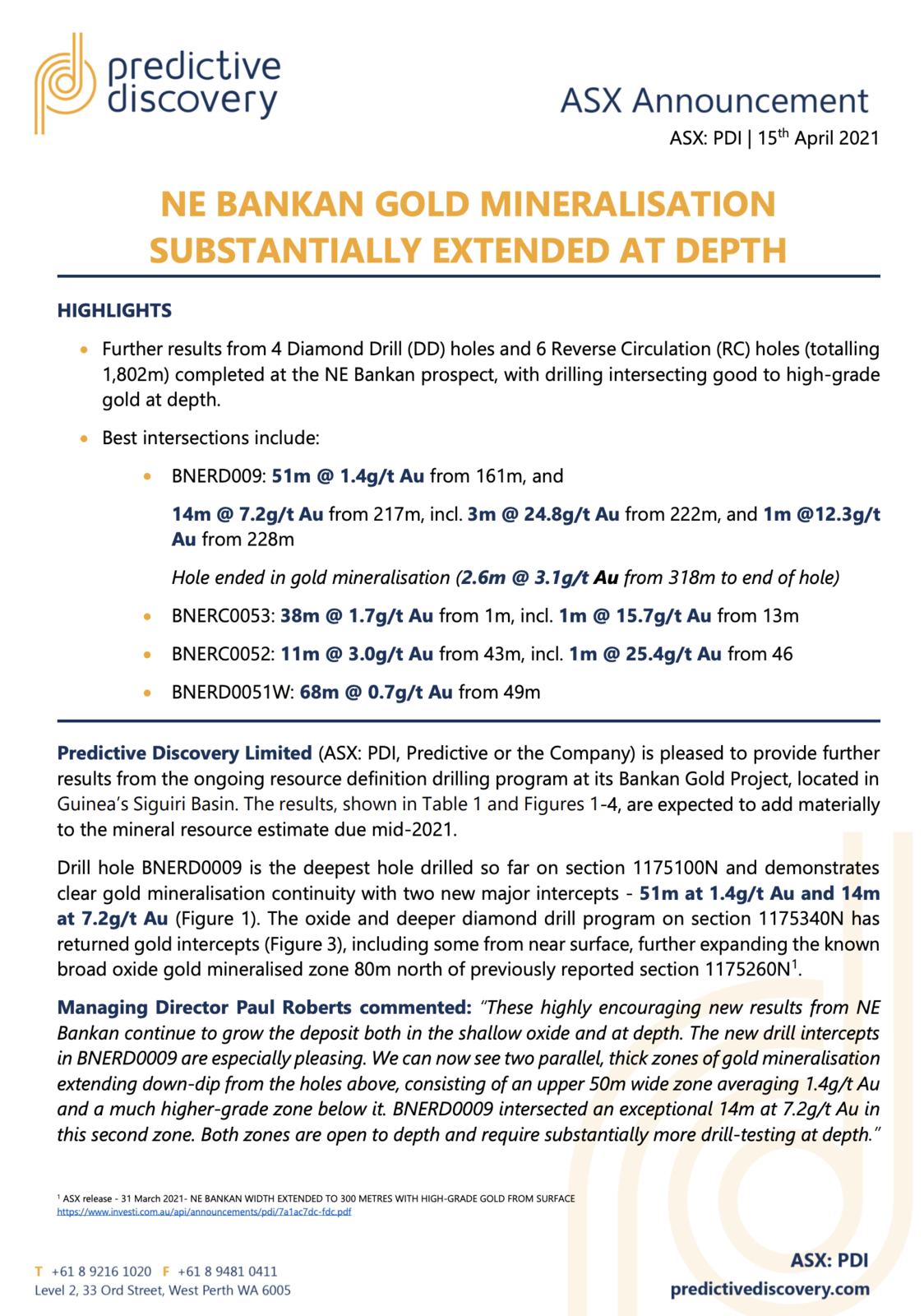 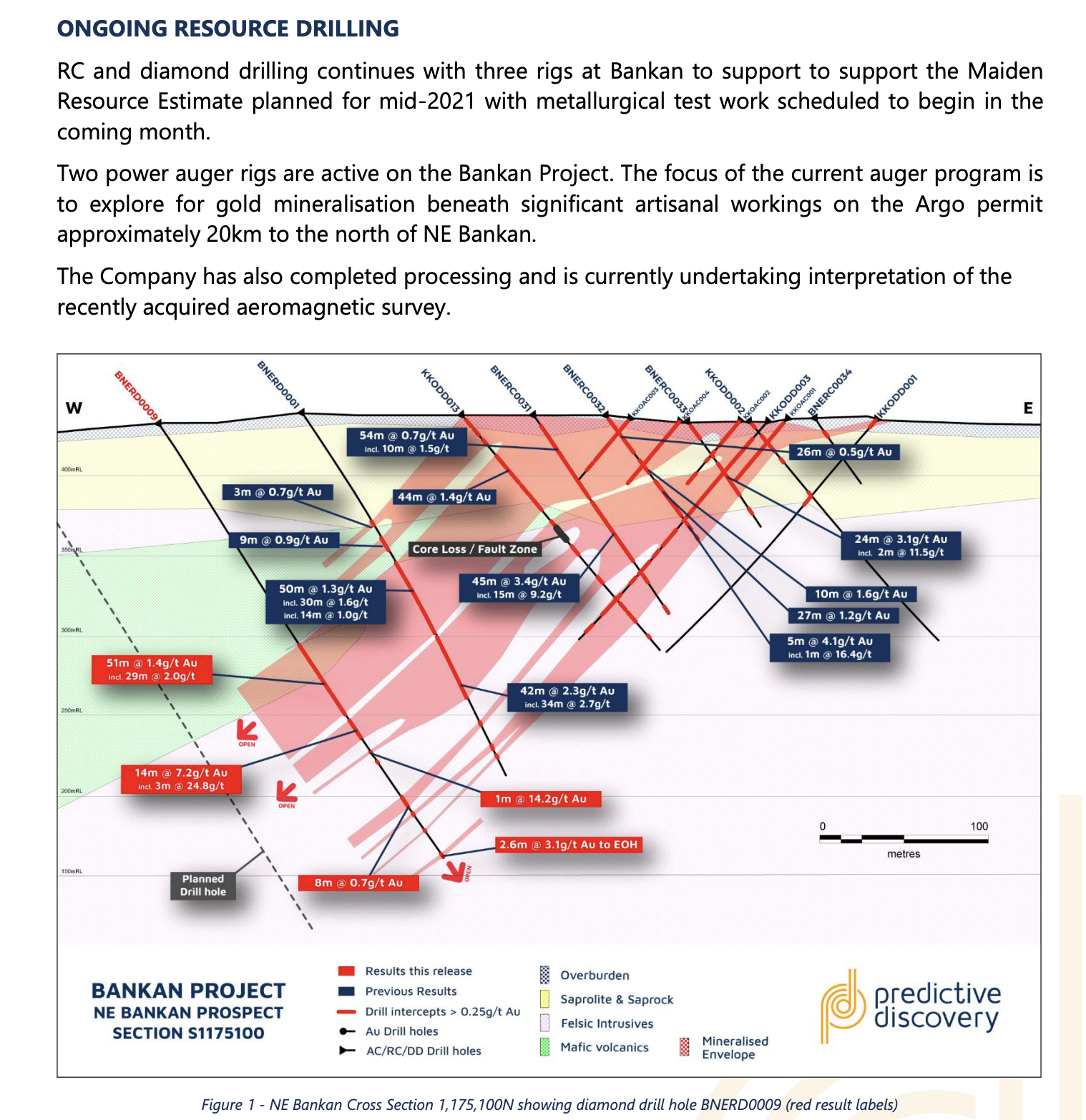 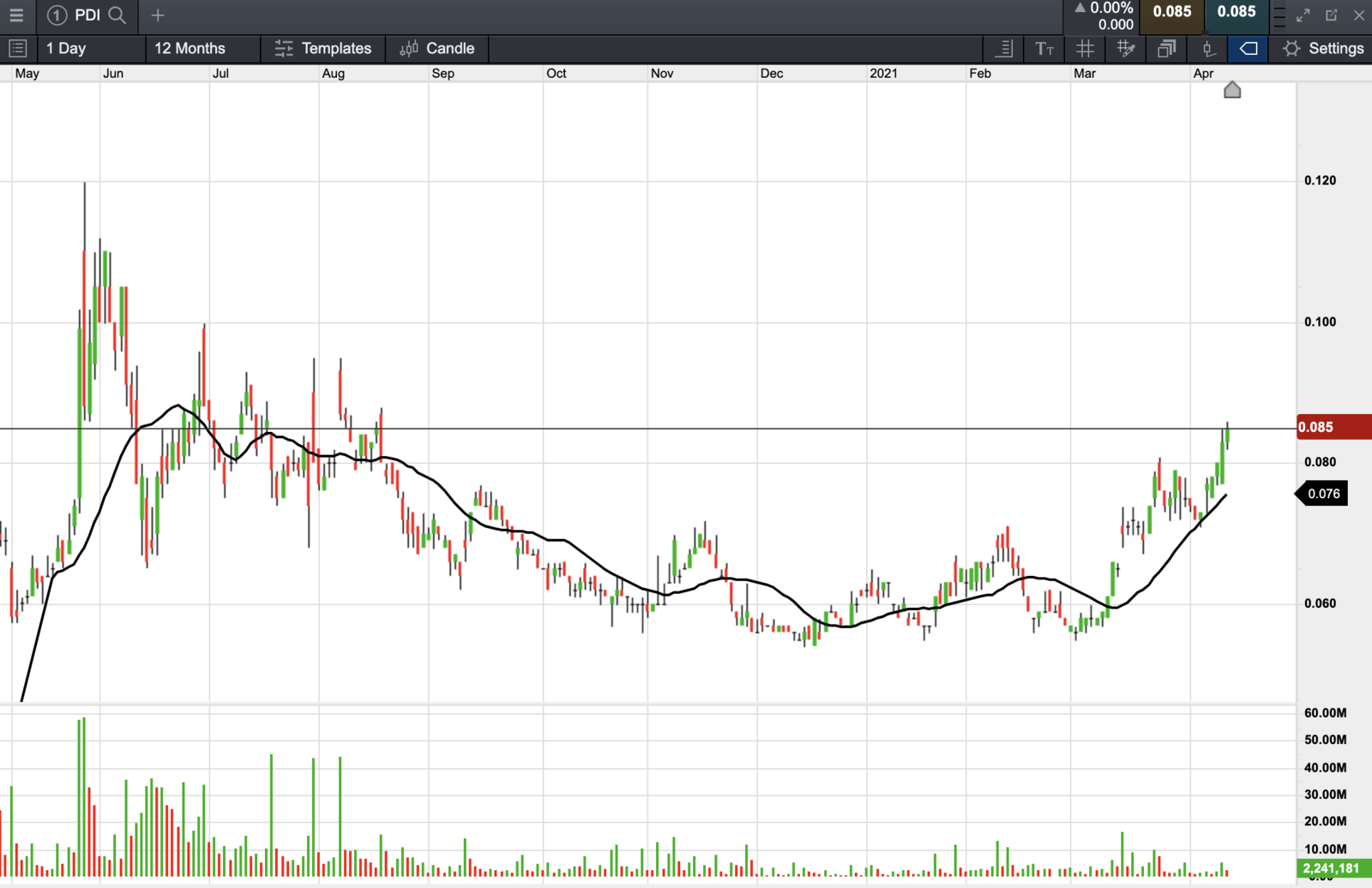 This may be a new discovery. Hotcockers may have got hold of this today, looks overcooked. 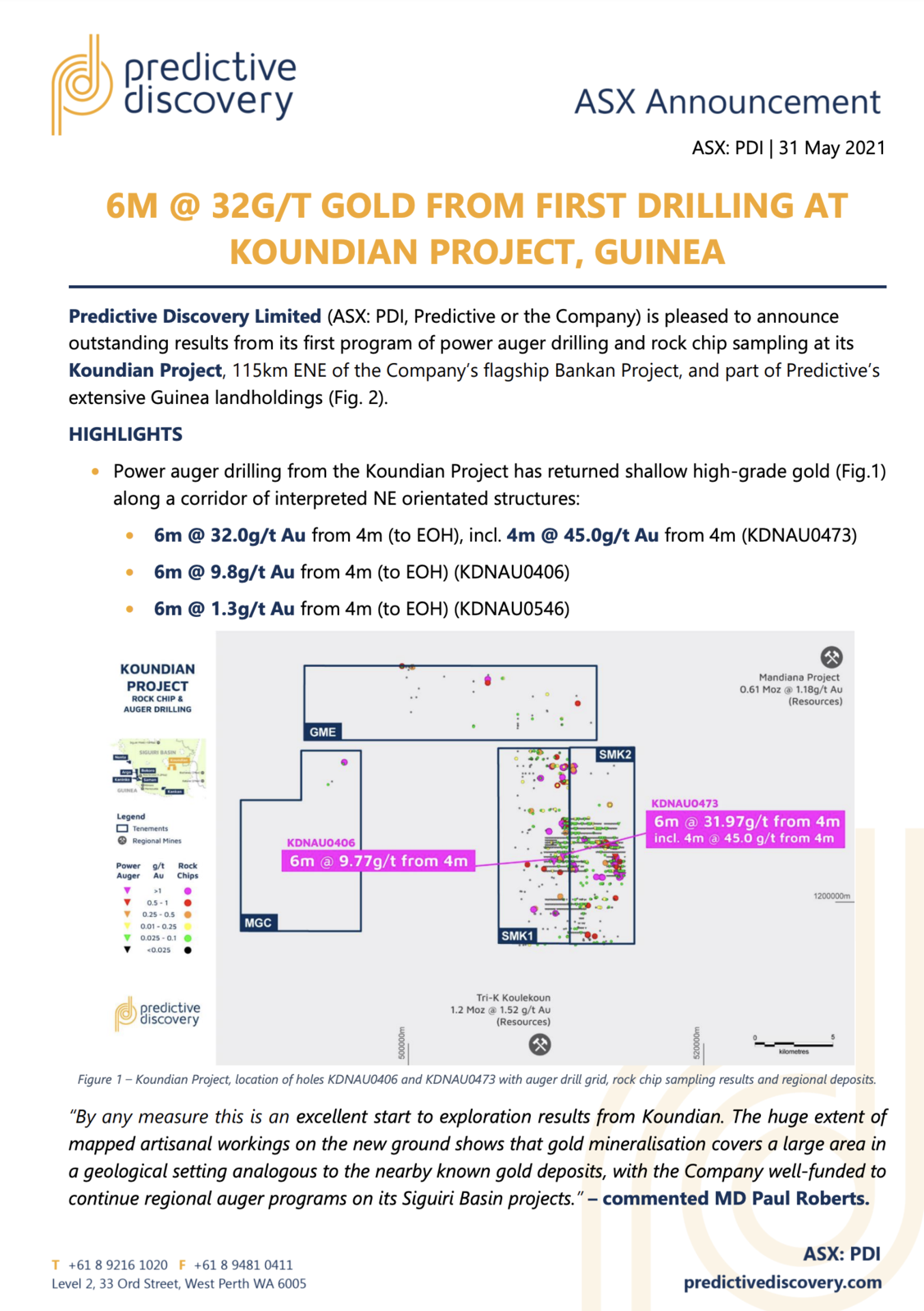 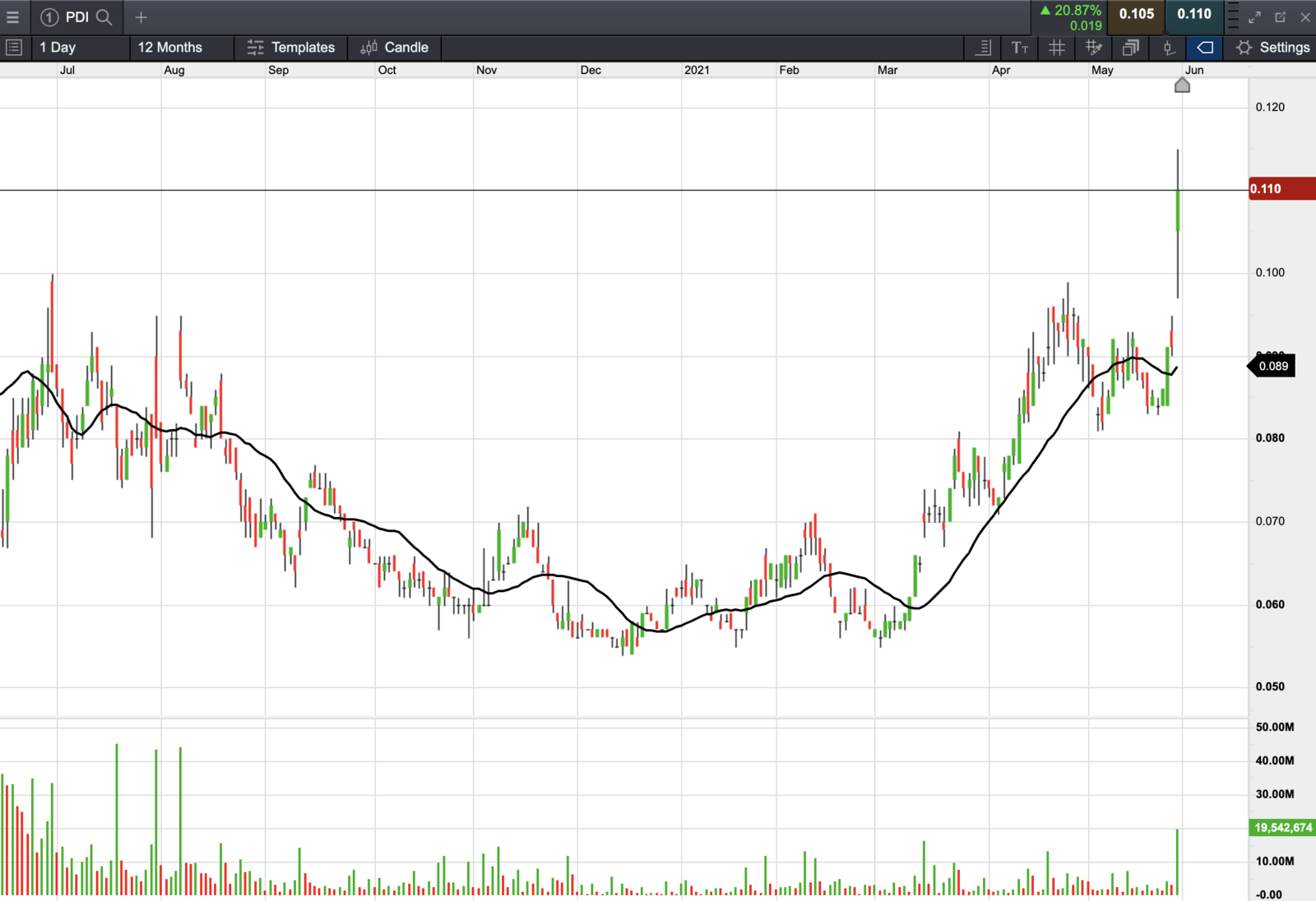 Was absolutely caned in June for no apparent reason. Maybe the drill results on the 17th were't as good as expected.

MRE due in Q3 so coming out of 'discovery' phase. 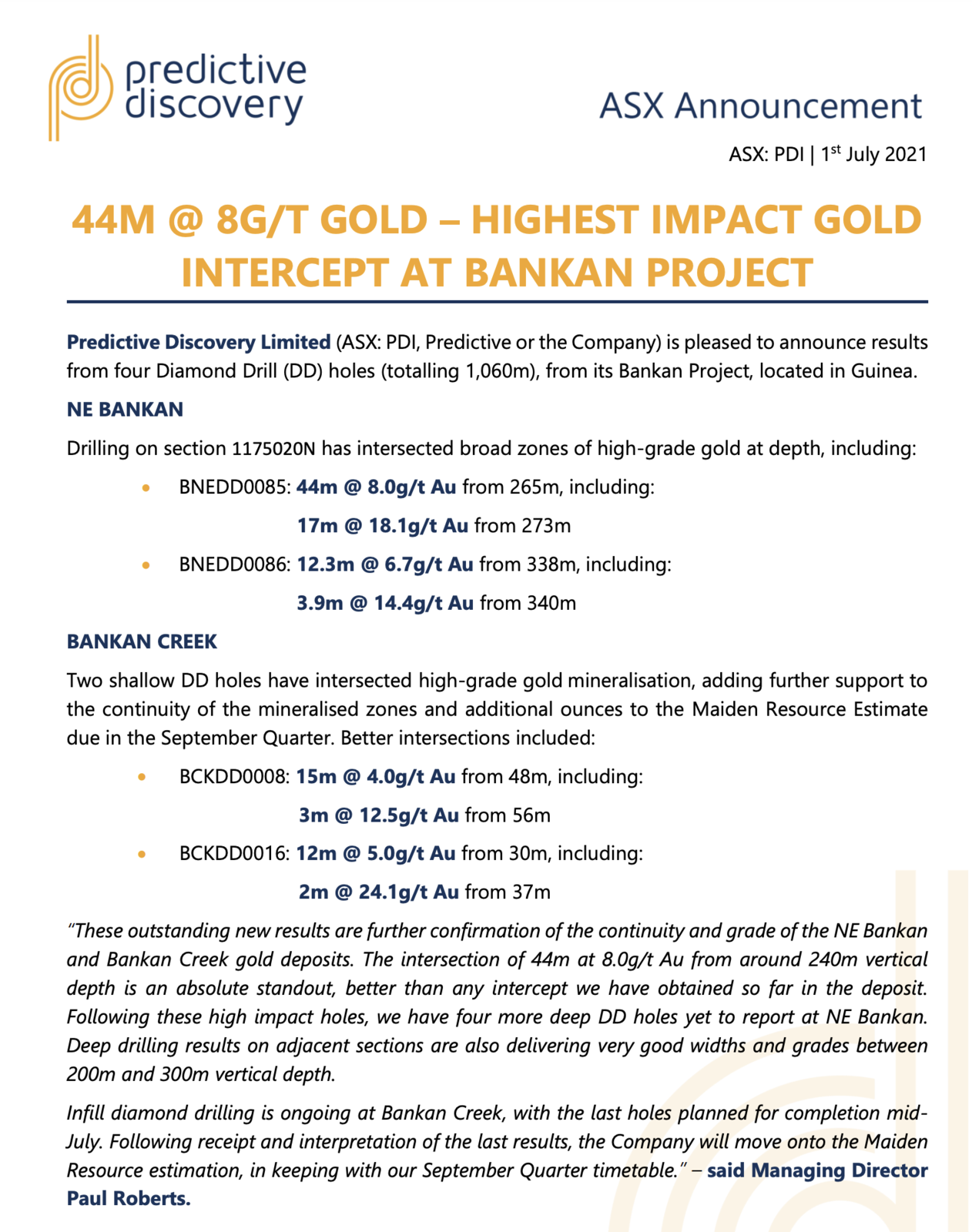 Interesting. Into a TH for exploration results. Must be good.

The Company has received material exploration results and requests a trading halt of its securities to allow it time to analyse and report the data to the market. 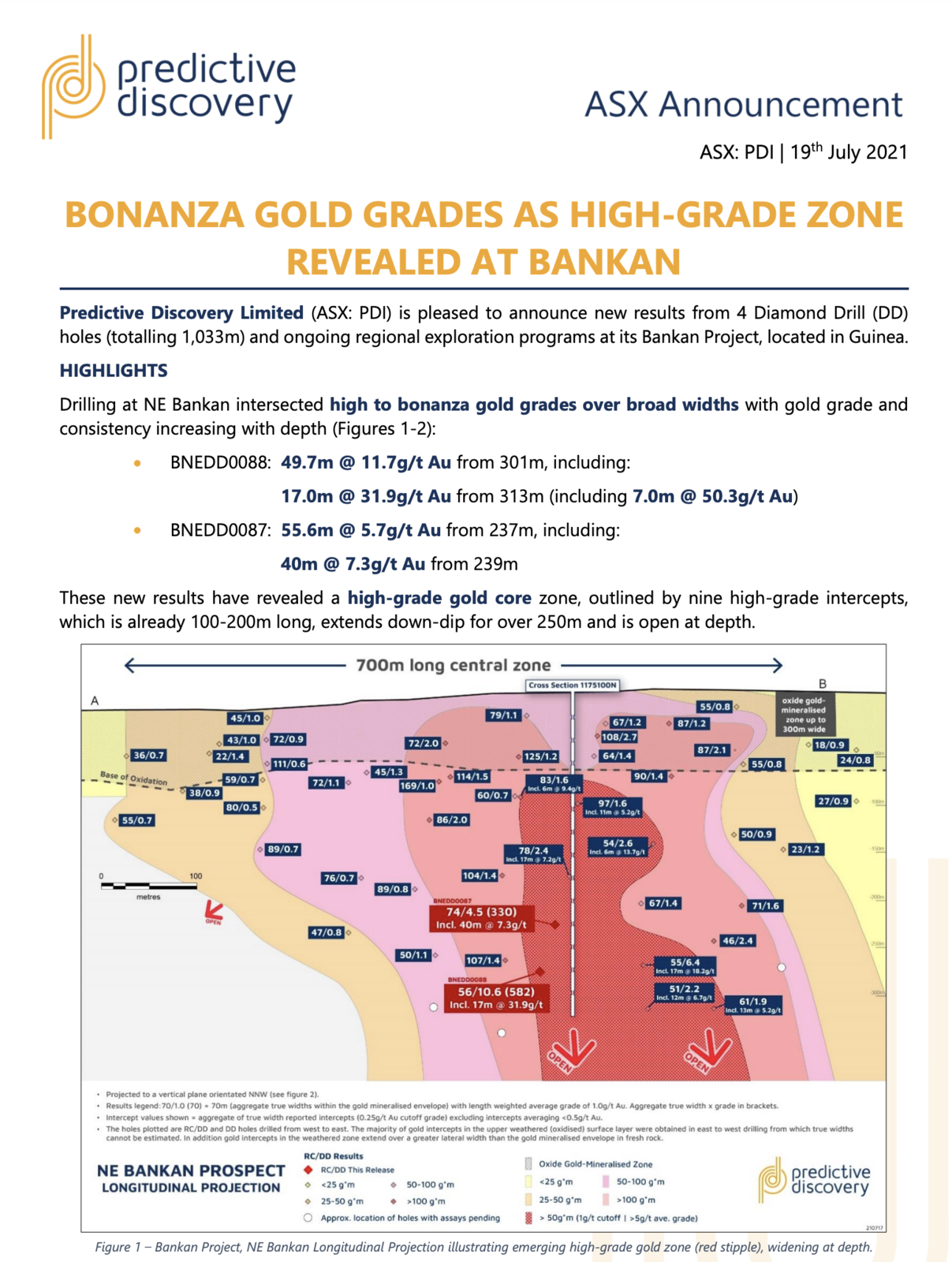 The mineralisation is at depth but those grades and widths are worth going after. The market agrees. PDI has opened strongly this morning, up 47.37% to 14c.

The re-rating from those 19 Jul results has held up. LRT's 4th highest holding average entry at about 3c should be good for their fund this quarter. 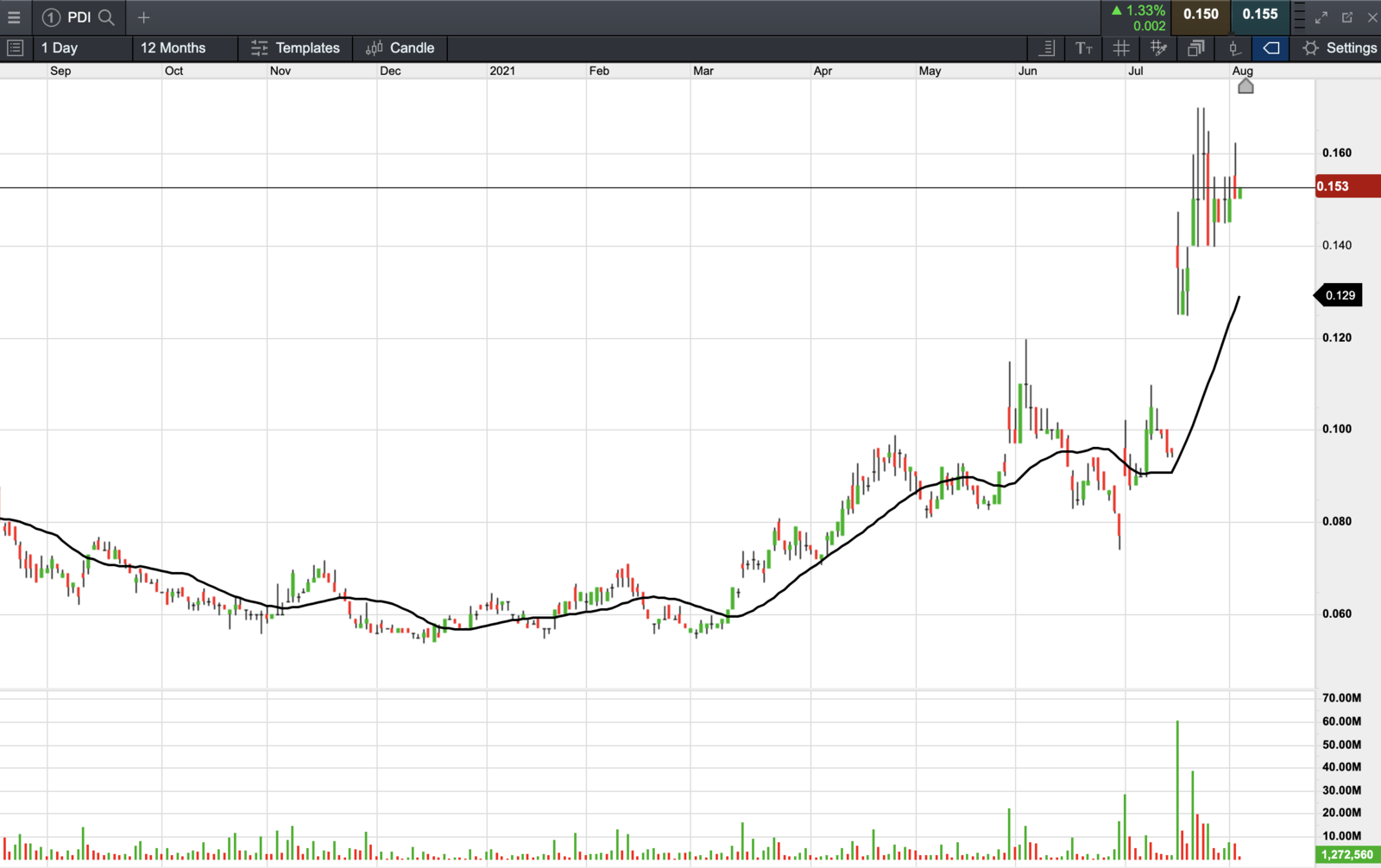 MRE set for late Sep. No idea what it could be. Hard to pluck dimensions with the different loads and depths. These are the last holes to be included in the MRE but they're still expanding the resource in many directions, especially down. 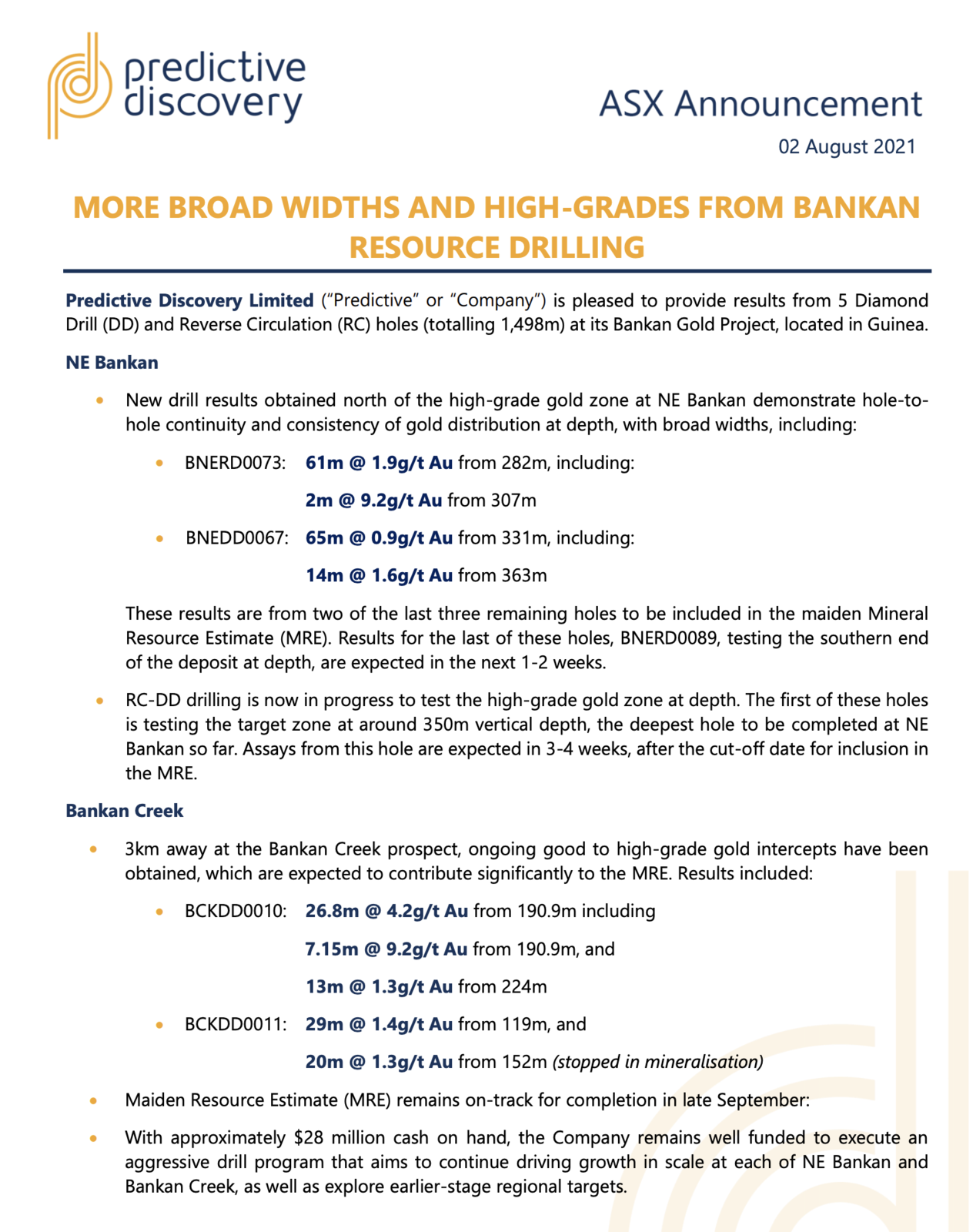 I still think it's a dumb name for a resource company. 'Predictive Discovery'? It's not a guessing game.