NAB shares have soared to their highest level in three-and-a-half years* on Wednesday, rebounding from a small loss in the previous session.

The bank said it was lending more, after working out how to approve mortgage applications quickly and deepening relationships with key business customers.

It beat profit expectations and doubled its final dividend following a strong rebound in performance during the 2021 financial year.

On Wednesday, Macquarie, Morgans, JPMorgan and Citi all upgraded their price targets on the stock.

NAB also beat on 1H expectations and announced a share buy-back worth $2.5b commencing this month.

All trading carries risk, but is there scope for the stock put in a new cycle high over the coming days and potentially break the longer-term resistance at $34? 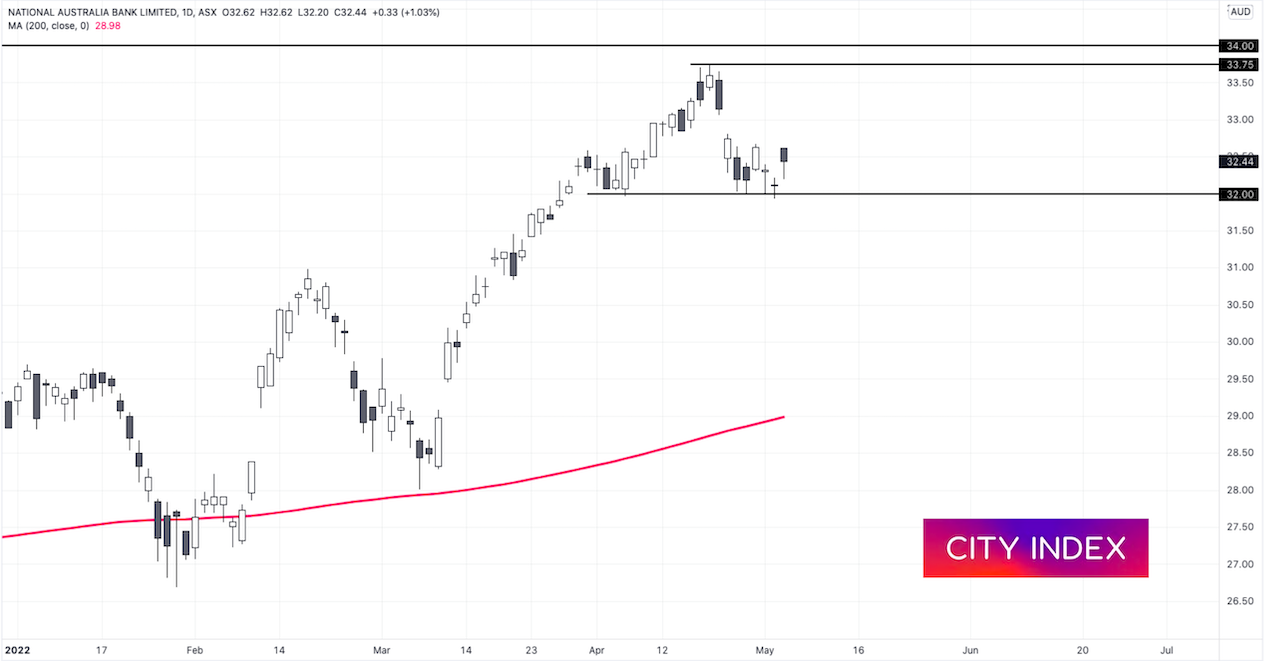 Great news, here is an article on the announcement.

NAB on Thursday reported cash earnings of $3.48 billion for the six months to March 31, an increase of 4.1 per cent on the prior period, and shareholders will receive an interim dividend of 73¢ per share, up from 60¢ the prior period.
NAB reported cash earnings had increased across its business bank by 17.5 per cent to $1.4 billion and institutional bank by 3.1 per cent to $806 million, while it had decreased by 8.3 per cent to $788 million in personal banking.
The big four bank increased its provision for bad loans by $2 million, as it braces for the potential impact of higher inflation and interest rates, following moves by the central bank to increase the official cash rate by 25 basis points this week.

sptrawler said:
The big four bank increased its provision for bad loans by $2 million, as it braces for the potential impact of higher inflation and interest rates, following moves by the central bank to increase the official cash rate by 25 basis points this week.
Click to expand...

2 million?.. thats a rounding error for a bank!!
mick

must have hired Bob Newhart ( the Retirement Party reference )
E

the RBA guidance of hoping for 2.5% rate by December ( so roughly double that for a mortgage ) will worry some ESPECIALLY since other costs , fees and charges are rising as well ( while wages/salaries tend to lag ) , in a difficult to predict manner

This market is a bit like my laundry days. The sun was out this morning; looked like it was going to be a good day, so I didn't ask Siri which is what I do every morning. I hung my washing out, it's wetter now than when it come out of the machine...........we don't know when it will pour

Had an interesting email from UBank so thought I would do some investigation, it looks like NAB has bought up a techbank platform. 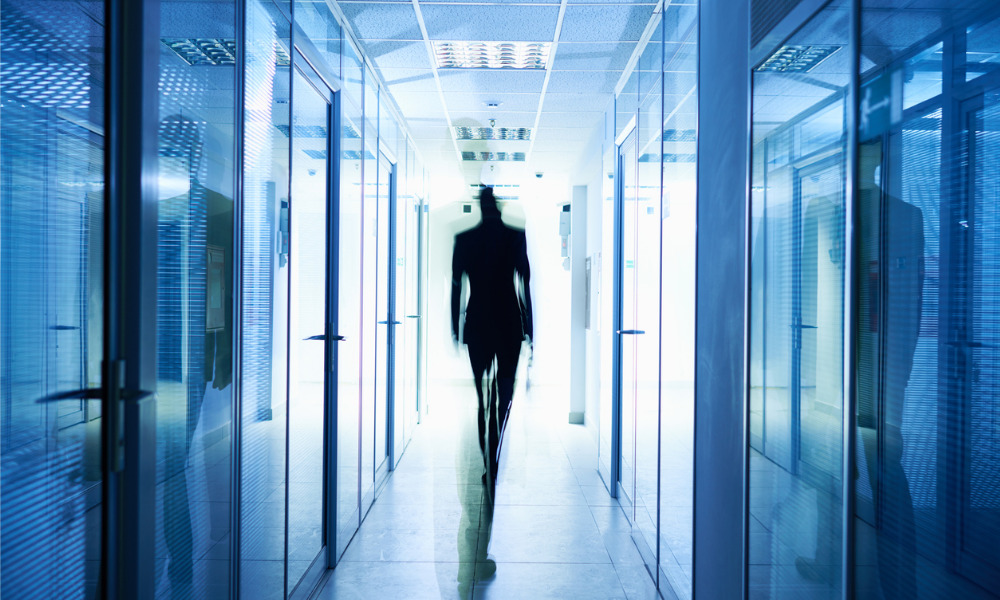 More than 35% of the staff that joined NAB in the deal have left, with some citing culture clash

www.mpamag.com
A large proportion of the staff at 86 400 has left since the digital bank’s $220 million takeover by National Australia Bank. About 50 people have left, with some citing a culture clash.

NAB’s acquisition of the digital bank was completed in May last year, but the staff exodus has continued into 2022, according to a report by The Australian. Sources told the publication that many of the resignations were due to the differences in culture between start-up 86 400 and the large incumbent.

“It’s a very different culture at NAB,” one person, speaking anonymously, told The Australian.
Nearly 140 employees of 86 400 went across to NAB in the acquisition, meaning the departures represent more than 35% of that intake.

86 400 head Robert Bell, whose exit was flagged by NAB, left after the transfer of 86 400’s banking business onto NAB’s licence, The Australian reported. Sources told the publication that 86 400 chief risk officer Guy Harding was also understood to be headed for the door. Head of lending Melissa Christy quit the bank last month to take a similar role at AMP.

NAB is integrating 86 400 into its digital arm, UBank, using the start-up’s technology but doing away with its brand, The Australian reported. UBank, which has been filling the gaps left by the 86 400 exodus and growing the combined team, plans to refresh its own brand in the first half of the year.
S

As you must know,nab also bough Citibank au retail banking...
Citibank was good and provided exposure to the world, i have multi currency accounts with them used seamlessly in March across the US and Central America.i am not confident at all the similar oversea exposure will be provided.not happy and feeling more and more blocked

have never been a NAB fan , although i did buy Clydesdale Bank ( now VUK ) after the spin-off for what looks now to be suicidal exposure to the UK economy

BUT if the price is right .. i will buy most stocks

That would be nice

divs4ever said:
have never been a NAB fan , although i did buy Clydesdale Bank ( now VUK ) after the spin-off for what looks now to be suicidal exposure to the UK economy

BUT if the price is right .. i will buy most stocks
Click to expand...

Yes I bought VUK in the covid crash around the $1 mark, have since sold but never say never.
As you say, if the price is right.

NAB says its head of trading sometimes carries a “souvenir bat” when he walks around the trading room, but it was a “fidget toy” and was not carried “in a threatening manner”.
Click to expand... 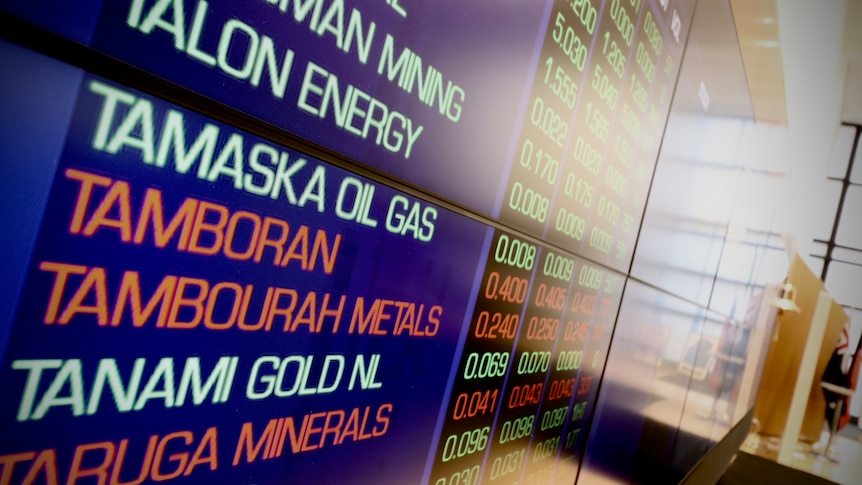 NAB posts a rise in quarterly profits, while US stocks end mixed as chipmaker Nvidia warns of a fall in revenue.

www.abc.net.au
From the article:
NAB said its unaudited cash profit rose 6 per cent over the third quarter from the same time a year ago, as it benefited from an increase in home and business loans, as well as higher interest rates.

The big bank said revenue increased by 2 per cent, but the net interest margin was slightly lower overall because of a fall in income from its markets and treasury divisions.

NAB said the benefit of higher interest rates for the bank in terms of higher income was partly offset by home-loan competition and higher funding costs.

NAB and other big banks have passed on in full the Reserve Bank's 1.75 percentage point rise in interest rates since May to home loan borrowers.