LYC Chart below and showing some upside 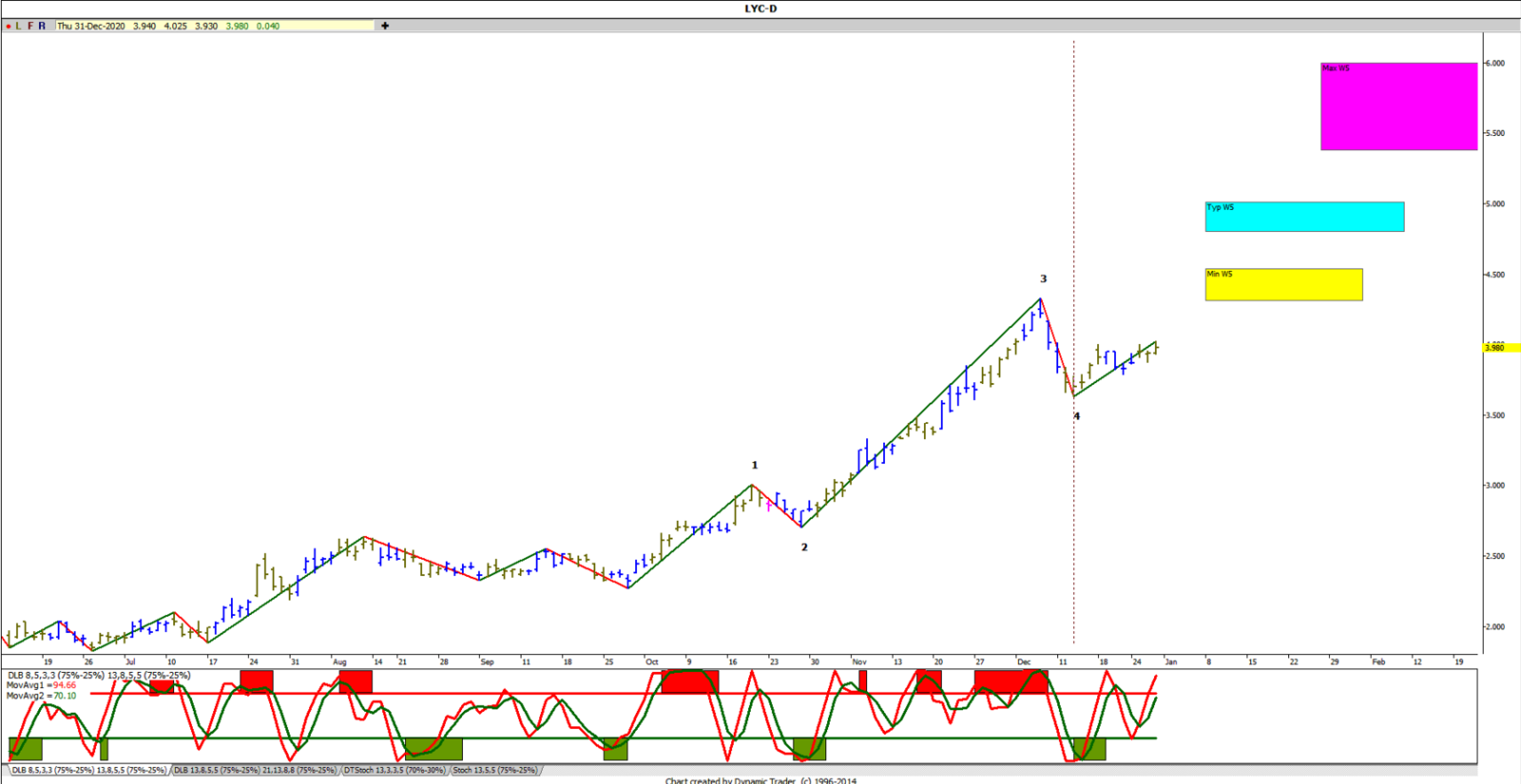 Lynas Rare Earths Limited has today entered into an agreement with the United States Government to build a commercial Light Rare Earths separation plant in the United States, through our wholly owned subsidiary, Lynas USA LLC. This collaboration with the Department of Defense is sponsored by the Title III, Defense Production Act program, which sits within the Pentagon’s office of Industrial Policy, and will ultimately be directed by the Office of the Undersecretary for Acquisition and Sustainment.

This project is scheduled to be completed in accordance with the Department of Defense timetable and as part of our Lynas 2025 plan. Detailed costings are still being finalized; we expect Department of Defense funding to be capped at approximately US$30 million. Lynas will also be expected to contribute approximately US$30 million under the agreement.

The plant is expected to be located in Texas. Once operational, the plant is expected to produce approximately 5,000 tonnes per annum of Rare Earths products, including approximately 1,250 tonnes per annum of NdPr. The plant will be able to receive material directly from the cracking & leaching plant that Lynas is developing in Kalgoorlie, Western Australia.

buy the rumour, buy the confirmation (of Biden as much as the agreement) 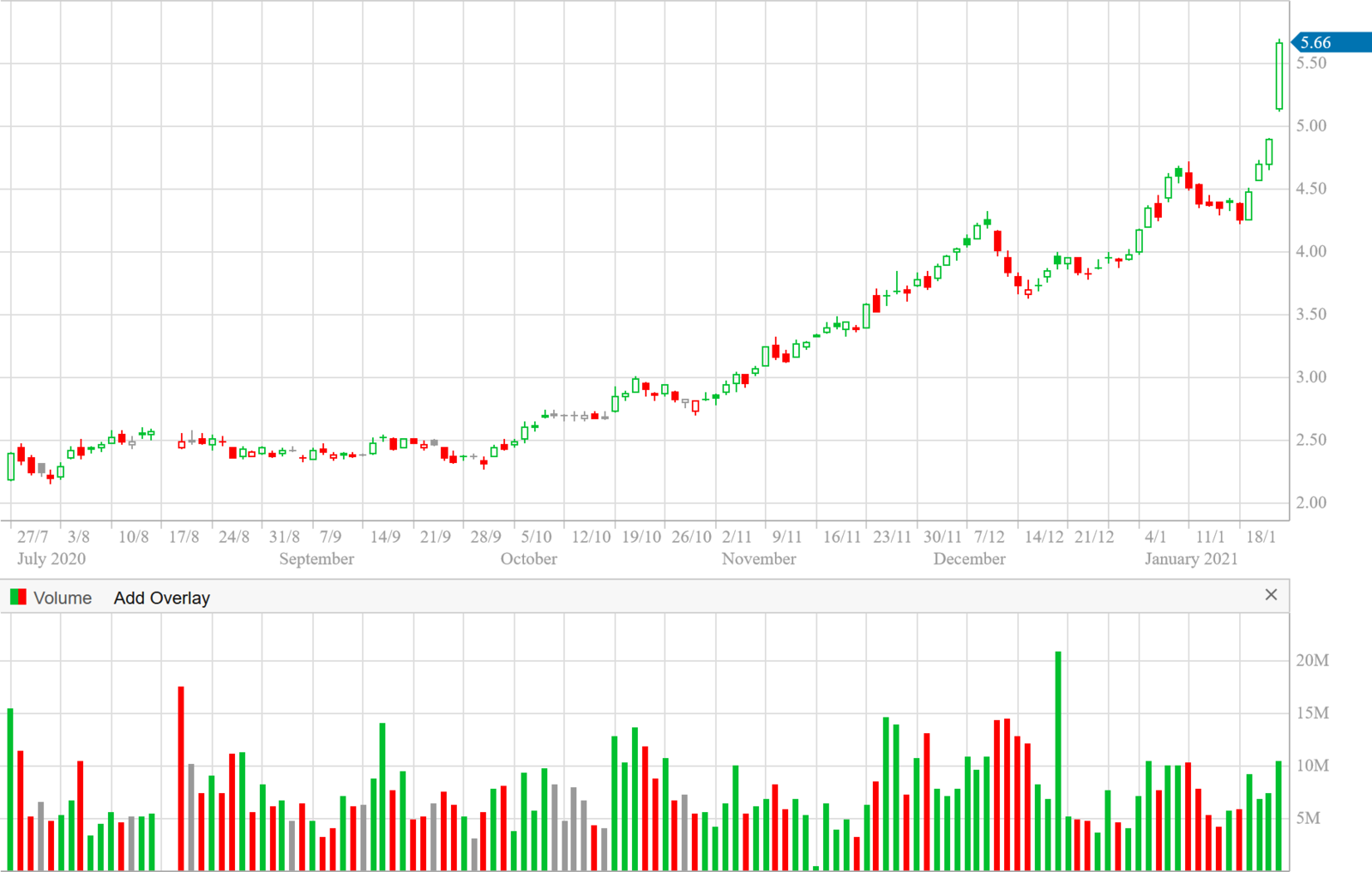 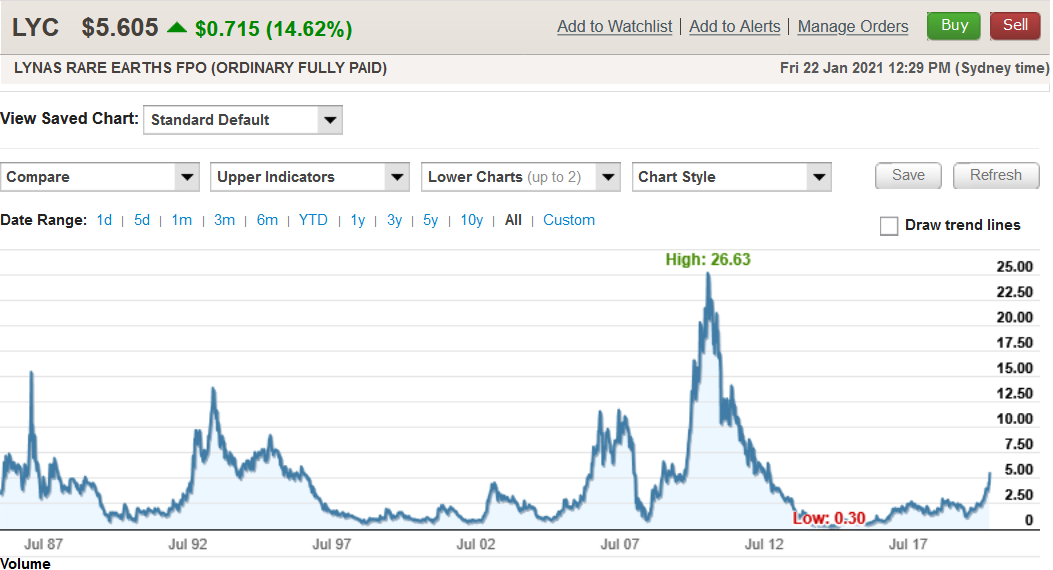 Share the feeling but we all know why Wages and higher costs with red tape, green tape,tax rates You can have the above and still make it.. Germany the example But you need effiiency ..

I still hold this and have watching it and @Trav. I took the start of the count from the March low.
The W.2 wasn't very convincing but it was all that was available.

Interesting to note the locations of the highs of both 21st and 22nd. 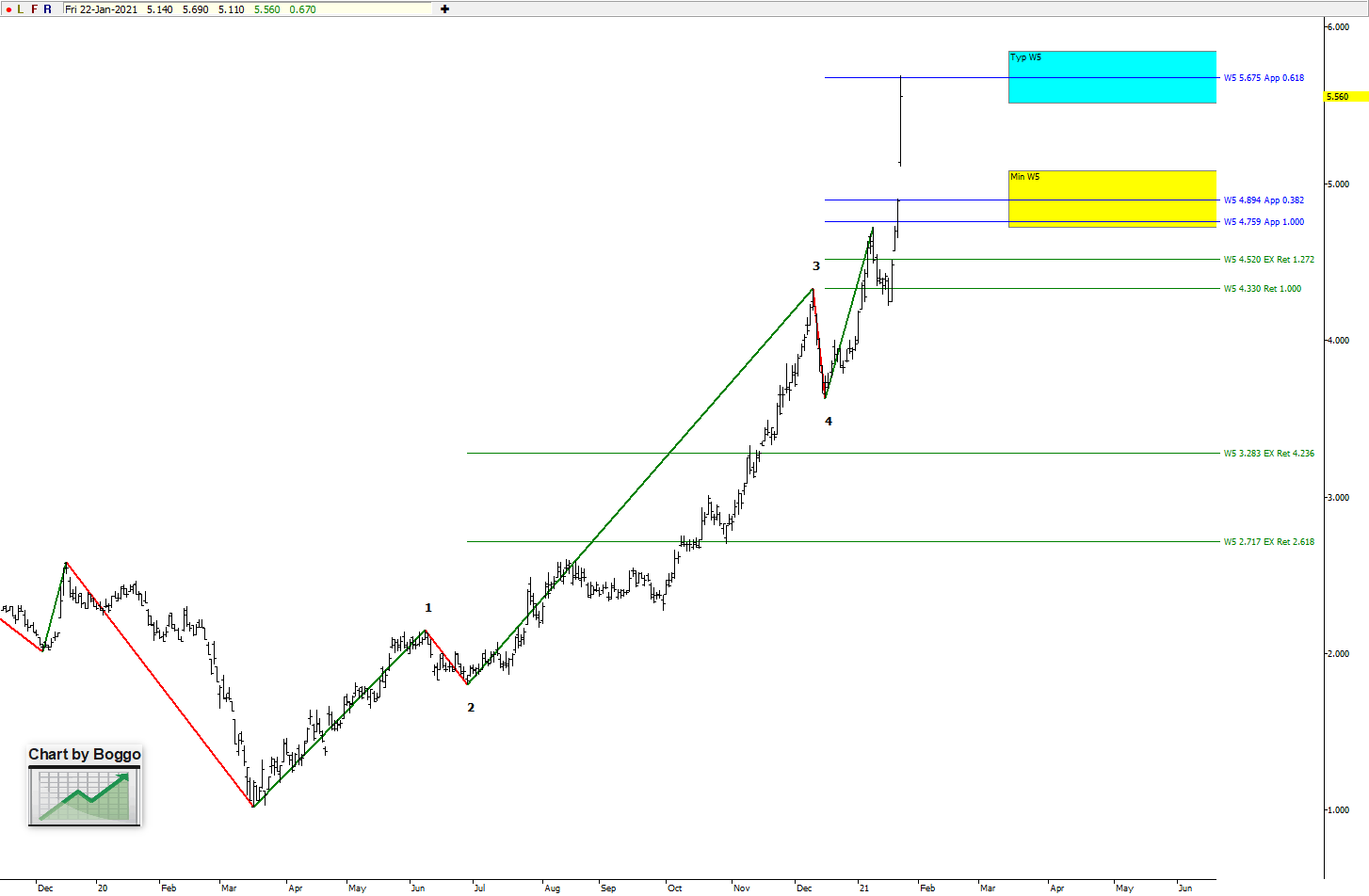 Boggo said:
The W.2 wasn't very convincing but it was all that was available.
Click to expand...

Very nice mate, and well done with this trade.

It took me a bit to fiddle with the wave count on DT to mimic your chart, which again is a lesson to take a step back when looking at the charts

Boggo said:
I still hold this and have watching it
Click to expand...

And this is the part of the process that gives me the most trouble.....how long do you give the trade? I have seen so many retrace and therefore give back the paper profits.

It took me a bit to fiddle with the wave count on DT to mimic your chart, which again is a lesson to take a step back when looking at the charts

Find for the low @Trav., always "eyeball" that as the start point and build from there.
Last edited: 24 January 2021


I was looking at a very similar chart last week @basilio and contemplating the possible upside of Rare Earths Companies over the next 12-24 months.

No secret I own a lot of VML, who have some ex-Lynas lads on their Board. Given the actual Rare Earth possibilities over the next few years, particularly with the "fear" of the China "domination", we are entering an interesting period for ALL R/E stocks.

Those that have the ability to produce and earn cash from the current situation should be in a dominant position, particularly where their share price is considered.

It's not at all difficult to imagine Lynas SP doubling over the next 12 months or so, and some of the advanced Speccies (my world) should also benefit well from the R/E resurgence.

Big opportunity here based on a combination of both Fundamentals and Technicals. (Perfect Storm)

@basilio good graph, also from memory they may well have had consolidations along the way, might be wrong but I remember when I was at work one of the guys got in early and you would often see him banging his head against the wall.

Next time I see him at a reunion I must as him.
But as everyone is saying, this time could be the time.

sptrawler said:
But as everyone is saying, this time could be the time.
Click to expand...

Then, how smoothly will things go?

Lifton on Biden and the security of supply of rare earths

The Washington bureaucracy has injected politics into the issue of obtaining a secure supply of critical materials. The first shots […]

Dona Ferentes said:
Then, how smoothly will things go?

Lifton on Biden and the security of supply of rare earths

The Washington bureaucracy has injected politics into the issue of obtaining a secure supply of critical materials. The first shots […]

Well that is what worries me, I just lack confidence with Lynas, why are they so against processing in Australia?
They set up in Malaysia, nothing but trouble with the process, so the nasty bit they bring back to Australia.
Now we find they want to build a new value adding facility in the U.S, yet Australia just gets the low value, high toxic bit.
I really find it hard to reconcile buying into an Australian company, that seems to only want to put manufacturing here as a last resort because no one else wants it.
Sounds real third world to me, I think the federal Government needs to step up and demand the downstream processing is done here, the same as happened in the 1960's when iron ore was first discovered in W.A
Being China's whipping block, is no different to being the whipping block of the U.S.
Just my opinion.

sptrawler said:
Well that is what worries me, I just lack confidence with Lynas, why are they so against processing in Australia?
Click to expand...

I suspect Lynas lack confidence in the Aust political environment, where we will demand radiation treatments for medical conditions but not allow treatment nor disposal of the ensuing (low level) waste. The Scare Police did a good job.

Dona Ferentes said:
I suspect Lynas lack confidence in the Aust political environment, where we will demand radiation treatments for medical conditions but not allow treatment nor disposal of the ensuing (low level) waste. The Scare Police did a good job.
Click to expand...

Yep the five second sound grab by the loonie minority, when they are in mud huts, no one will hear them.

Way too many people on a public service pension IMO, opinionated, with no skin in the game.
The tax payer funds them, their pensions are indexed despite the market, the taxpayer stumps up the losses.
It is time the Governments State and Federal plus the future fund, just paid out the public service pensions as a lump sum, same as everyone else.
Then we might lose a lot of white noise, by opinionated taxpayer funded warriors, IMO it is time they led from the front rather from behind a taxpayer funded shield.

Lynas jumped more than 9% yesterday after revealing it had won an Australian government grant to commercialise an industry-first rare earth refining process at its planned WA plant.

The company’s share price hit a high of $6.41 after telling the market it would receive a $14.8 million Modern Manufacturing Initiative grant from the federal government.

Lynas said in the statement the money will allow it to produce a higher purity rare earth carbonate that can feed its Malaysia plant, as well as its proposed US Rare Earth processing facility. The process will be installed during the construction of the company’s processing facility in Kalgoorlie.

The grant is expected to contribute approximately half of the implementation cost. Lynas chief executive Amanda Lacaze said the new refining process will contribute to reducing chemical consumption and processing costs.

barney said:
Up another 5% this morning. Make that 6% Waiting patiently for the Spec end of the R/E market to catch up
Click to expand...

Even though my "super stock" VML continues to behave like a Spec (which it still is of course),

The R/E sector looks to be holding ground well overall.

Geoff Atkins suggested that VML will be the next Lynas. I live in hope, lol 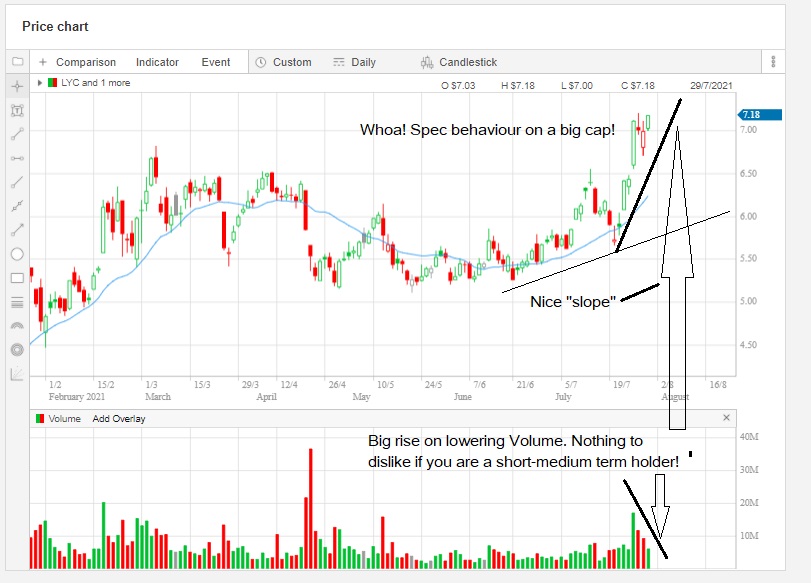 I've been missing in action for some time now but logged on now to see how the Lynas was mentioned on this forum. Lots of water has gone under the bridge since those early days. I often wonder what Curtis thinks about Lynas now. I posted this on another forum today where there seemed to be panic because of government changes in Malaysia this week:


"I was of the opinion that the Lynas Mt Weld deposits may not be the largest deposit but they are the RICHIST and that is why they are so valuable. They are also less radio active with the radioactivity being in the form of Thorium and not Uranium. In addition i believe you are right when you say they could be the most efficient and enviromentally responsible refining operation in the world.

One thing that Lynas has in its favor is that they also have one of the best CEO in the business. Amanda's management has been amazing. I am sure when Curtis stood down and appointed her as manager it was because he expected her to fail and his other interest, Forge, would take them over for a song. I'll bet he lies awake at night wondering how she succeeded when he failed. Not only has she been a good manager but a good ambassador and that has been needed with the political aspects of mining and processing rare earths. This need will continue as long as mining rare earths continues.

I can't imagine any reason to be bearish on Lynas. I can see many reasons to be bullish."

There are people here, still posting, that will remember the time when Curtis was prevented from selling out to Chinese interests and it was shareholders posting here that lobbied government to stop that happening. Later on when he was trying to sell Lynas assets to another company where he was the major shareholder it was shareholder action that lobbied ASIC to have that sale prevented.

Those will also remember the early days in Malaysia when Curtis failed to get the plant operating and covered that up by blaming the Malaysian protest groups stopping the plant operating. At that time I was privy to inside information and posted the real story on stock forums. Next came the sale of most of his holdings to a merchant bank at a price above the current SP. The rumor at that time was that he had bought a large luxury yacht and when it was delivered he could not pay for it with this happening at the same time he had borrowed against his shareholding. The story was that a condition at the time was that he resign as CEO. He appointed Amanda as CEO, probably expecting her to fail and with Lynas close to liquidation he would get a cheap takeover. Amanda has turned out to an amazing manager with political nous and has managed to make Lynas a great company and a great investment.

In the past I have talked about the Lynas story would make a great movie. It may yet do that.

nioka said:
I can't imagine any reason to be bearish on Lynas. I can see many reasons to be bullish."
Click to expand...


I believe many agree with you @nioka

I don't hold LYC, only VML, but always keep an eye on the "big brother" for RE sentiment 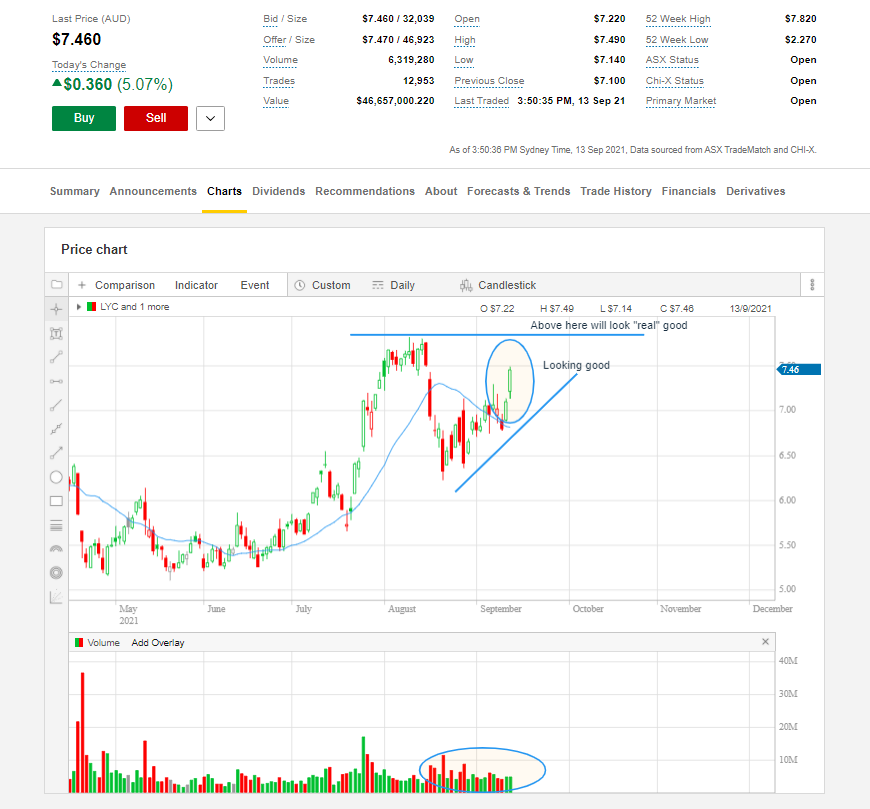 Please forgive the lack of a chart but LYC looks like it could be making that break for freedom today.

bux2000 said:
Please forgive the lack of a chart but LYC looks like it could be making that break for freedom today. 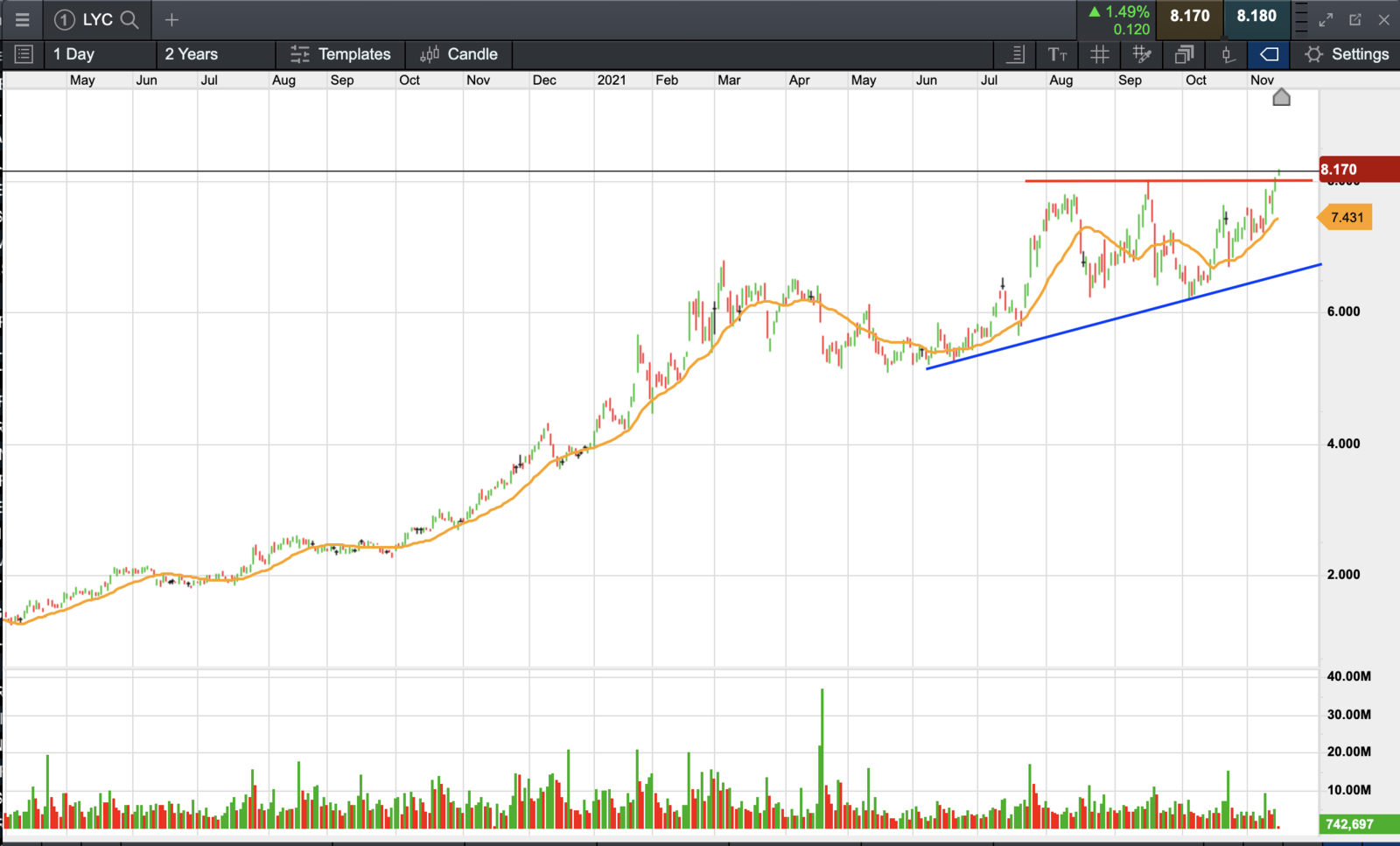 Uranium in for correction, not a rout