Previous discussion of this company can be found in the TVN thread: https://www.aussiestockforums.com/forums/showthread.php?t=21873

They may look like an upstart, but the Microsoft connection caused the Market to take notice.

I hold in expectation of a breakout.
If 23c holds support - likely with a 500k bid at that level - I'll stay.

Pullback and bounce.
This break could turn into something profitable if the breakout attracts additional volume.
I hold already. Target 39c; stop at 26.

Livetiles Limited has been making slow but good gains over the last 12 months. Occasional legs up followed by extended periods of consolidation.

The move on Friday has me interested after the company announced that it has won the 2018 Microsoft US Partner of the Year Award for Modern Workplace Transformation. This will increase awareness of the company and most likely boost revenue as a result.

50c looks like resistance to me, so LVT has been added to the watchlist in case it continues north next week.

Resistance at 50c has been breached and it is currently trading at 52c, up 6.12% from yesterday's close.

I had a very good feeling about Livetiles and it's starting to look like a potential breakout. It just needs a catalyst and a strong move north on high volume.

It struggled with 60c back in January but I'm liking its slow but steady trek north from 35c over the last couple of months. Volume has increased substantially over the last couple of weeks. My feeling is that LVT will have a period of consolidation above 60c before a strong move north when the next good announcement is released.

Livetiles holding and consolidating above 65c after a rapid move up from 55c. I'm still bullish about LVT but think it's probably going to rest a little at these levels before the next catalyst sends it higher.

Good commentary on this one again Greg ….. Any idea what their NPAT figures are roughly? …..

They look to be generating a lot of customers so if the Costs Vs Profit margins are good it could be very lucrative.

greggles said:
I'm still bullish about LVT but think it's probably going to rest a little at these levels before the next catalyst sends it higher.
Click to expand...


Well, it did get a little higher at the end of July 2018, but only just. LVT peaked at 75.5c before the share price collapsed over the following four months to a low of just 27.5c in December where it formed a double bottom.

Since then, LVT has tracked back up and is currently trading at 59c. Annualised recurring revenue is still growing strongly as can be seen from the chart below. In the company's 1st Half FY19 Results Announcement released on 27 February 2019, they said that their "key objective is to organically grow ARR from $30.9 million as at 31 December 2018 to at least $100 million by 30 June 2021 (six months earlier than the Company's previous target)." 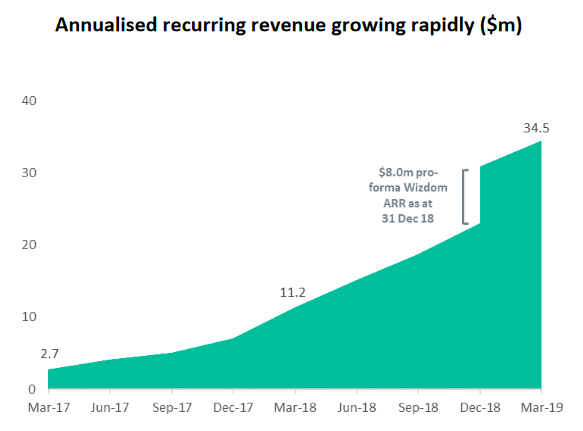 In February LVT acquired Wizdom, a leading 'plug and play' Microsoft-aligned digital workplace software business with a strong European footprint with 243 SaaS customers. The maximum total purchase price of Wizdom is $48 million with a $28 million upfront payment ($9 million cash and $19 million in LVT shares) and an earn-out with a maximum of $19.6 million.

To fund the acquisition 45 million share LVT shares were issued in a placement to institutional and other sophisticated investors to fund the upfront cash purchase price and for working capital purposes.

Wizdom generated $12 million in revenue in CY 2018 and turned a small profit. 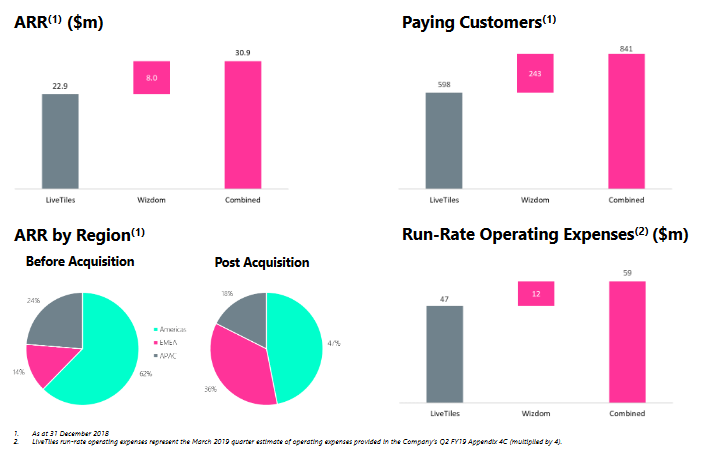 LiveTiles is an Australian IT company that specialises in the development of intranet portals and online working environments for corporate clients. It aims to deliver intelligent, cloud-based software solutions that optimise user experience, increasing employee engagement and productivity in the workplace.

According to its own website, LiveTiles has already worked with some big name international clients including food and beverage giant PepsiCo, German conglomerate thyssenkrupp and the United States Department of State. LiveTiles has also continued to cosy up to Microsoft in the United States, partnering with the global computing giant in the release of a new SharePoint product during 2019.

I read somewhere they could benefit from Covid situations, working from home, etc; and the company claims the same; "... with COVID playing a global role to accelerate digital workplace software adoption". 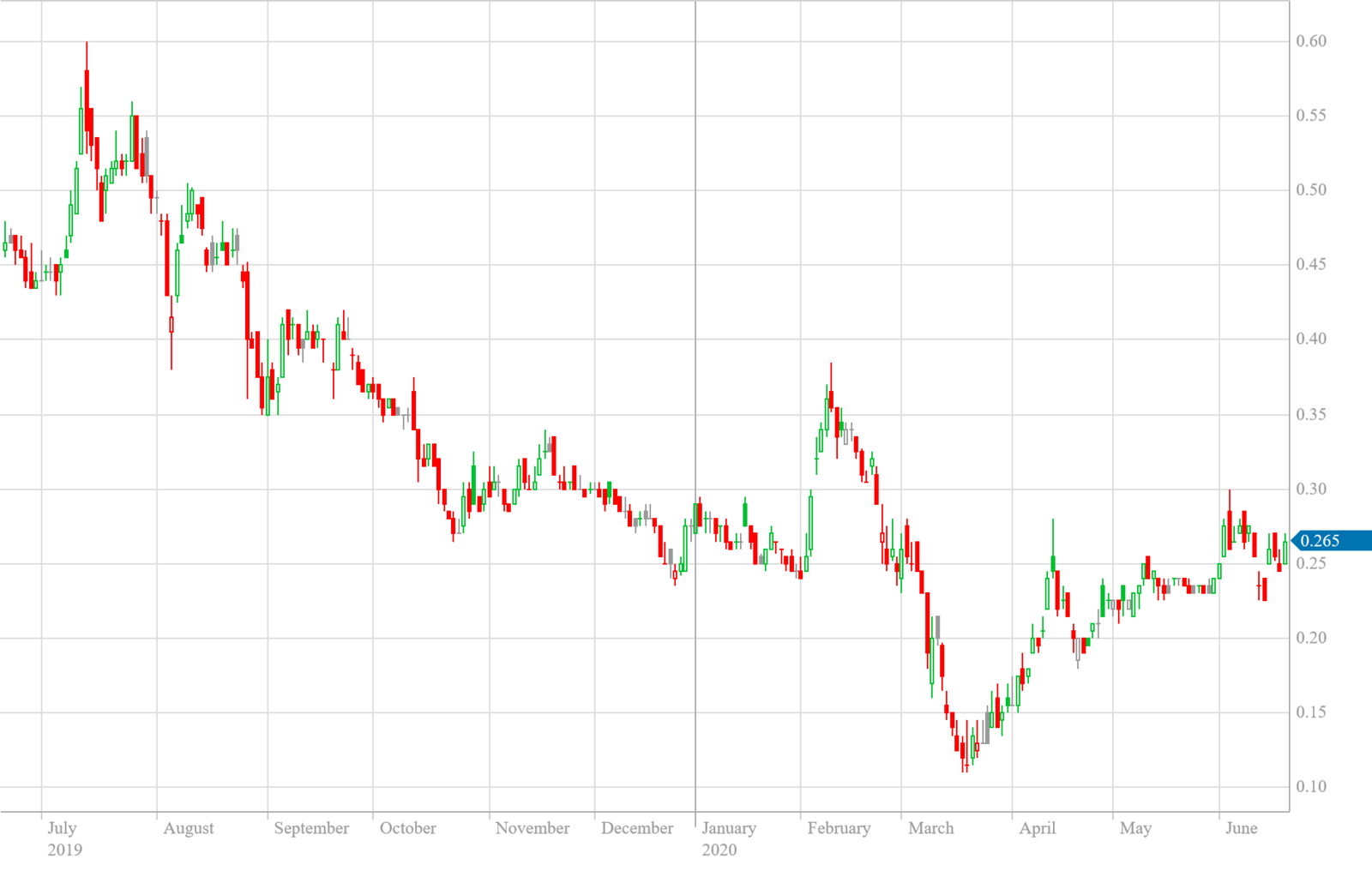 doesn't give Atlassian much of a wrap!!

The image ... shows LiveTiles as having the largest market presence outside of Microsoft and Atlassian, as well as being compared favourably against the two tech giants.
Click to expand...

Dona Ferentes said:
doesn't give Atlassian much of a wrap!!
Click to expand...

It started to look good after the March lows, but today's down bar has an unpleasant taste about it.

Record multi-million dollar deal with US-based Fortune 100 Healthcare company.
Customer
Pursuant to ASX Listing Rule 3.1, LiveTiles confirms the customer is United Healthcare Group.
Contract terms
For completeness, the Company wishes to provide the following additional information in relation to the contract:
• The signed contract is for an initial and minimum term of three years.
• The minimum contract value is A$3.0m, with the potential to grow up to A$12.2m over the life of the contract based on the customers possible employee headcount growth over the next 5 years, and with the inclusion of additional products and services that may be required as the project evolves.
• There are no material conditions that need to be satisfied.
• There is no other material information relevant to assessing the impact of the commercial agreement on the price or value of the Company’s securities.