Previous discussion of this company can be found in the DMN thread: https://www.aussiestockforums.com/forums/showthread.php?t=21661

• On 29 May 2012 NuWorld announced it had signed a binding term sheet to acquire 100% of the issued capital and options of Fleurieu Mines NL with Fleurieu in return for the issue of up to 18.5 million NuWorld shares and 6,168,834 NuWorld options (post a 200:1 consolidation).

• The Transaction is subject to certain conditions, including NuWorld shareholder approval, the successful completion of a public capital raising, and recompliance with Chapters 1 and 2 of the ASX Listing Rules as a consequence of a major change to the activities of the Company.

• The effect of the proposed Transaction is that the nature and scale of the activities of NuWorld will change from information technology to focus on mineral exploration.

• On 20 July 2012 the Company announce the appointment of Dr Kevin Moriarty as Executive Chairman and
the resignation of Mr Michael Robson. Dr Moriarty is a professional geologist and company director whose career has included acquisition and management of geophysical and geological projects in both the petroleum and minerals sectors. His later career has focussed on base and precious metal exploration and development, leading to commissioning of the Angas Zinc mine in South Australia in 2008, and acquisition and management of a major mining project in North Africa. Dr Moriarty is non- executive Chairman of Oroya Mining Limited (‘ORO”) and was Executive Chairman of miner Terramin Australia Limited (“TZN”) for 12 years until May 2011. Dr Moriarty is a member of the Australian Institute of Mining and Metallurgy and of the Geological Society of Australia.

FLEURIEU MINES NL AND ITS ASSETS
Fleurieu has an interest in 10 exploration licences and applications totalling 5,540 square km’s along the Olympic Arc corridor that hosts the major mines and discoveries of the Gawler Craton in South Australia. Chief amongst these is the giant Olympic Dam mine

Recent activity around Fleurieu’s tenements includes RioTinto’s $85 million joint venture with Tasman Resources, and BHPB spending $18m to buy greenfields tenements from junior explorers. In 2011, the Carrapateena project was sold to Oz Minerals for $250 million. This has been driven by recognition that the region is likely to host numerous deposits of greater than 100mT following the discovery of Carrapateena and Hillside, while some older discoveries may prove economic with further evaluation. NuWorld has consulted an Independent Geologist who has estimated that the total value of Fleurieu’s tenements is in the range of $3.3 million to $5.4 million, with a preferred value of $4.4 million, as at 31 May 2012.

All Fleurieu tenements are in the Olympic Arc, the most prospective zone for major iron oxide hosted copper-gold-uranium (IOCGU) deposits. It defines the eastern margin of the Gawler Craton where hydrothermal activity has been most active. Altered metal rich deposits are common in this hundreds of kilometres wide zone and have high densities that show up as anomalies in gravity surveys.

In the southern part of the Olympic Arc, where the prospective rocks extend to the surface, the recent discovery of the near-surface Hillside deposit in the old copper mining region around Moonta has confirmed the potential for significant discoveries. This is a particularly strategic region for low-cost exploration because the targets are not buried under hundreds of metres of younger strata, as at Olympic Dam and Carrapateena. Fleurieu Mines has three projects close to infrastructure in this southern zone, with old copper mines and gravity anomalies confirming the prospectivity. Extensive geophysical and geological survey and analysis has defined major ready to drill anomalies. A key difficulty for exploration has been the use of the area by the Department of Defence for training, however the Department has recently approved access for drill testing, opening up the last major shallow targets in the Craton.

The Independent Geologist reports that the Fleurieu projects have received with broad scale encouragement from the exploration completed to date, particularly the Cultana and Myall Creek tenements that have drill ready targets. Cultana (Fleurieu 25%) and Myall Creek (Fleurieu 50%) are in joint venture with Strategic Energy Resources Limited.

The Cultana project has historic copper mining and associated gravity anomalies indicating metal rich systems. The Cultana gravity surveys indicate an extensive untested system covering 100 km2 associated with a granite intrusion, as occurs at the Olympic Dam deposit. It is expected that discrete anomalies may indicate breccia pipes, for example at target C01, where the association of copper mining and a pipe like anomaly is very encouraging. C05 is a higher priority target because it is associated with stronger anomalies and a potentially larger system.

The Myall Creek Project contains a Cu-Pb-Zn prospect with copper sulphide intersections of 0.5-2.2% Cu extending over an area of about 3 km2. This mineralisation band lies within a poorly defined, broad zone extending for 15 km. The Pandurra Cu Mine is located at a dilation site of the intersection between two faultsystems.

The Honeymoon Dam Prospect is proposed for drill testing because it is in a similar situation to the Pandurra Mine and is associated with coincident gravity and magnetic highs like many of the major deposits in the Olympic Arc. This prospectivity is enhanced because the proposed drill site is adjacent to a highly chargeable IP anomaly and an earlier drilling program showed that the copper mineralisation is generally present in the marginal area close to a highly chargeable zone. The Honeymoon Dam Prospect is large and adjacent to the existing Myall Creek mineralisation zone. Two previous drillholes within the Prospect area intersected relatively high grade copper mineralisation.

Several of Fleurieu’s tenements are prospective for sedimentary uranium in addition to IOCGU deposits. They contain old drainage systems exhibiting anomalies that could indicate economic deposits of uranium, such as are mined at Honeymoon and Beverly elsewhere in South Australia.

KSN jumped on the back of CXO's Lithium announcement.
Both own adjacent tenements in the NT.

I bought some. No sheep stations, strict speccie rules.

Kingston Resources popping its head above resistance at 2c following this morning's announcement that they have discovered a new zone of shallow high-grade gold mineralisation at the Abi Prospect in the Quartz Mountain area of the 2.8Moz Misima Gold Project in PNG.

Here are the details: 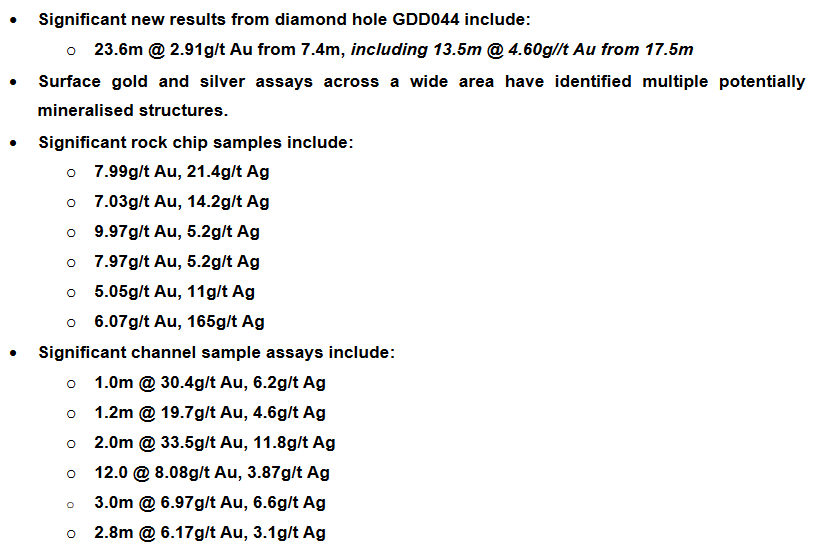 The results look very encouraging but especially so since they are close to the surface. Obviously there needs to be more drilling here but it's certainly a positive start.

The company indicated that it intends to accelerate the current drilling program. A second diamond rig is currently being mobilised to the site and is expected to start operating next month. Additional in-fill and extension drilling is planned to underpin an updated Mineral Resource estimate.

One to watch for the gold bugs.