The Company was incorporated in May 2011 with the objective of identifying and developing high quality gas projects in southern Africa with a view to meeting the region's growing energy needs.

I don't know alot about Coal Bed Methane in South Africa, but that MC:Cash ratio of 1:1 is too appealing not to keep an eye on. Fits all the right criteria in term of capital structure, but requires further investigation into the project.
Ermelo Right not being commercial is a concern.
Some information on CBM and attitudes towards it in S Africa.
http://www.polity.org.za/article/coal-bed-methane-the-alternative-energy-source-2010-08-24

Sunbird has a portfolio of five CBM projects covering an extensive area (8,647km²) of prospective coal basins across southern Africa, where an abundant coal resource, limited domestic gas supply and growing energy needs have created significant opportunity for the development of large scale energy projects.
Sunbird has a strategic alliance with African joint venture partner Umbono Capital Partners (Proprietary) Limited, which provides Sunbird with an experienced operational team and new project pipeline.
Sunbird is conducting a phased exploration program that will define the resource base and demonstrate the commercial potential of its portfolio of CBM assets which contain a Best Estimate Gas-in-Place of 5.3 Tcf (Trillion cubic feet) and up to a High Estimate of 29.2 Tcf

Ermelo Project
In March 2012 the first well was spudded in a core hole drilling program aimed at assessing the resource potential of the Ermelo project area. The drilling program was completed in June 2012.
Samples from the coal seams in each core hole were collected in order to undertake gas desorption analysis to determine their gas content. Additionally, each core hole has undergone geophysical logging to assess the reservoir characteristics of the coal intervals.
While desorption analysis is ongoing, initial results indicate that due to the uplifted nature and shallow depth of the coals in the existing Ermelo Exploration Right, gas contents are lower than anticipated and may not support commercial development. Sunbird will continue to assess data from the core holes as results are received over the coming months.
Sunbird’s focus in the Ermelo area will now be on the Ermelo West Application area where the coals are at greater depth and have the potential to deliver a commercial gas resource. A technical review of the core hole results and the existing data set will enable planning of future exploration activities to be undertaken once the Exploration Right is granted.
Ermelo is located in the Witbank coal mining region of South Africa about 200km south east of Johannesburg. The project is strategically located to established infrastructure and is traversed by the Sasol Gas Pipeline. The Ermelo Project area is composed of the Ermelo Exploration Right covering 646 km² and the Ermelo West Application covering 797 km², and is held by Sunbird (74%) and Umbono (26%), Sunbird’s South African joint venture partner.

Mopane Project
Following an aeromagnetic survey in late 2011, interpretation and geological desktop studies have been completed at Mopane.
These studies have increased the potential for successful exploration and development of a large scale CBM project. To more fully evaluate the project, the drilling program has been expanded from three core holes to up to eight core holes commencing in August 2012. It is expected that this will enable Sunbird to accelerate the definition of the resource base and commence pilot drilling in 2013.
The coal seams within the Mopane Basin are the equivalent formation and similar in quality to those that have been successfully developed for CBM production by Anglo American in the neighbouring Waterberg Basin, where a 1 Tcf (Trillion cubic feet) CBM resource has been defined. The target Ecca coal package, based on drilling results from within the Mopane licence, provides a net coal thickness of over 32 metres at depths greater than 400 metres
Studies have shown that these extensive coal deposits combined with favourable depth, provide significant resource potential across the Mopane Project. Independent Experts have determined that the Mopane Project has a Best Estimate Gas-in-Place of 1.9 Tcf with a High Estimate of 13.66 Tcf.
Mopane is located in the Limpopo Province of South Africa about 420km northeast of Johannesburg. The project lies on the western limit of the Tshipise Coalfield which contains coal projects owned by Rio Tinto and Coal of Africa. Mopane is traversed by major electricity transmission lines that form part of the Southern African Power Pool and is also close to major local mining and mineral processing facilities. With a licence area of 1,577km², the project is held by Sunbird (74%) and Umbono (26%).

Springbok Flats Project
Following detailed technical and desktop assessment of 600 exploration bore holes at Springbok Flats, a core hole drilling program has been planned to assess the resource potential within the permit area.
An exploration drilling program to provide gas content, geophysical logs and permeability data is due to commence in the fourth quarter of 2012 with three core holes planned. Environmental studies and approvals are underway.
Springbok Flats is located 150km northeast of Pretoria in northern South Africa. The area is considered favourable for the occurrence of CBM due to the presence of extensive coal deposits and depths adequate for CBM development and preservation. In March 2012 Sunbird applied for 1,257km² of additional exploration acreage contiguous with its existing Springbok Flats licenses. Once this application is granted, the combined Springbok Flats permits will be 2,456km² held by Sunbird (74%) and Umbono (26%).

Kinetiko Energy is another ASX listed company with CBM interests in S Africa.

Southern Africa Coal Bed Methane explorer Sunbird Energy announce that drilling has commenced at its Mopane Project in South Africa.
Following rig mobilisation to site, the first core hole in an eight well program was spudded on 14 August.
The Mopane drilling program has been increased from three core holes to eight, following the interpretation of an aeromagnetic survey completed by Sunbird in late 2011. The aeromagnetic survey results demonstrate the potential for successful exploration and development of a large scale CBM project at Mopane. Land Access Agreements have been completed for all eight core holes, paving the way for an efficient drilling program.

Sunbird Managing Director Will Barker said the aim of the program was to determine the gas content, reservoir characteristics and resource potential of Mopane which, based on an Independent Expert Report, has a Best Estimate Gas In Place of 1.90 trillion cubic feet (Tcf), with a High Estimate of 13.66 Tcf.

Interpose Holdings gapped up today after announcing that it will acquire an 80% interest in 250,000 acres in the Cabora Bassa Basin, Zimbabwe via the acquisition of a 100% interest in Invictus Energy Resources Pty Ltd.

Some interesting detail on the Cabora Bassa Basin from the announcement:

Mobil was lured to the Cabora Bassa Basin in Zimbabwe in the early 1990s by the size and potential that had been identified by regional aeromagnetic surveys, which revealed thick sedimentary sequences within the rift basin. Mobil was searching for big oil targets and spent US$ 30 million acquiring surface and subsurface data, including gravity surveys and over 1600 line kilometres of 2D seismic data. Their studies determined that the Cabora Bassa Basin has all the required ingredients of a working petroleum system.

Mobil reliniquished the acreage when their studies revealed that the basin had higher potential for gas than oil and at that stage there was a lack of a structured market for gas in the region. During Mobil’s exploration phase, they identified and mapped the massive Mzarabani anticline, which has an area of over 200km² under closure, at favourable depths to host a conventional gas target. This makes the Mzarabani potentially the largest undrilled structure in onshore Africa and a highly attractive exploration project.
Click to expand...


The company is proposing to raise up to $4.5 million, by way of a placement of 150,000,000 fully paid shares in the Company at $0.03 per share to fund the acquisition, as well as exploration costs and working capital.

It's the first good news for IHS (formerly Sunbird Energy) in a long time after trading sideways since its price declined from 40c to 5c starting in late 2013. Its share price is up 1.5c to 4.4c this morning.

Invictus Energy making some solid gains on good volume in the last couple of days, but no obvious catalyst for the move up.

IVZ has risen from 4.3c at the open yesterday to 5.3c at the close today, an increase of 23.26% in two trading sessions.

Some good news around the corner?

Positive Chart Greg …. $4 million in the bank and a $20 million market cap

Apparently they have access to $30 million worth of old Mobil data in relation to their Project area … that's a nice head start if they reprocess the data and prove up something of value.

I like this one as well, just need some $$ to come available to jump in. Directors buying earlier this month and a nice little spike on Friday when most other stocks struggled 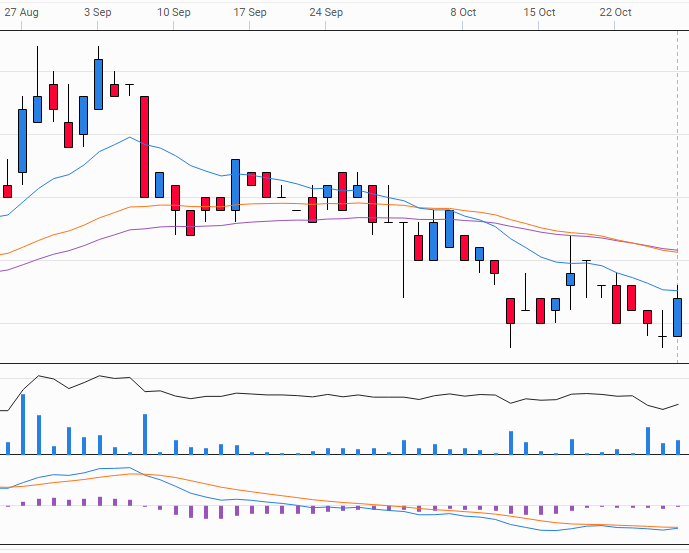 I am guessing IVZ had a small spike up on Friday as both the price of natural gas and WTI oil had a small three day up tick as a breather from its recent solid falls. Tomorrow I will put up the chart for XEJ the ASX 200 energy index. Even though IVZ isn't included in the XEJ, it is likely to follow the XEJ with any rises or falls. 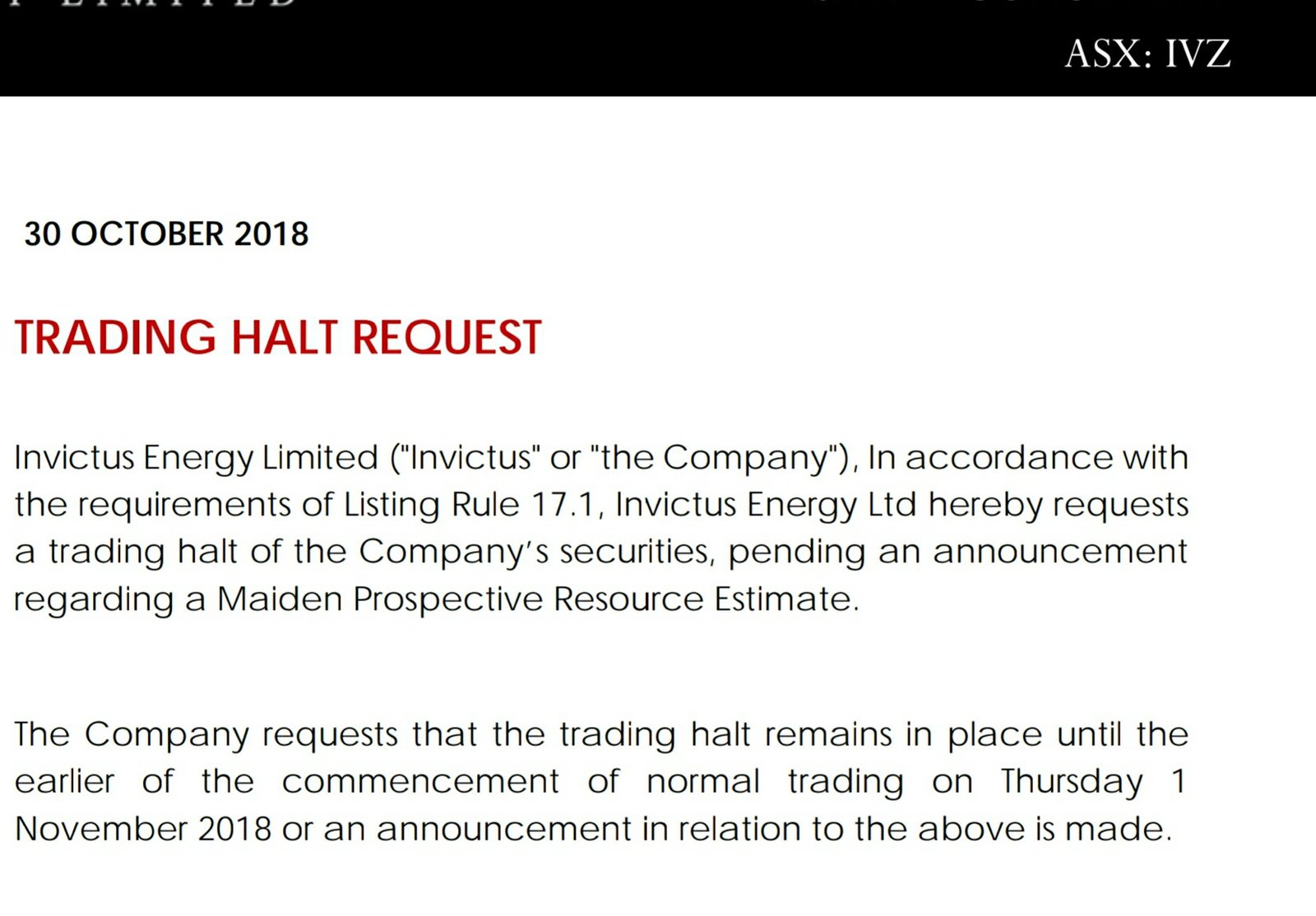 They are sitting around 4 month lows on the chart so good news will be timely ….

Maiden Prospective Resource for the Cabora Bassa Project estimated at 3.9 Tcf and 181 million barrels of conventional gas/condensate according to announcement released this morning. A solid result, especially considering this resource estimate only includes the primary Upper Angwa target.

After hitting an intraday high of 7.3c, the IVZ share price has retreated to be currently trading at 5.6c, up 36.6% from its last closing price. Volume is more than 25 million shares traded so far today.

Trav. said:
Some good volume prior to the trading halt so will be interesting (not held)
Click to expand...


Yeah solid volume last 4 days ….. If it trades back above the price of the Volume area (49 cents or higher) it will start to look pretty good for this leg. Under 45 cents not so good.

I noticed @Trav. tipped for this so started looking into it. There are others posted on IVZ, Sounds interesting.
https://au.finance.yahoo.com/news/does-invictus-energy-limited-asx-021119734.html

@Miner yeah well my tip is not looking to good this month, as it depended on an announcement which when released did not sit well with the market and to be honest I am not sure why.

One to put on a watch list and wait to see if they start drilling exploration holes to prove if this resource is really there.

Miner said:
I noticed @Trav. tipped for this so started looking into it. There are others posted on IVZ, Sounds interesting.
https://au.finance.yahoo.com/news/does-invictus-energy-limited-asx-021119734.html
Click to expand...


Oilers are so hard to read at times Miner …. They announce what looks a positive announcement and the share price looks to be on its way ….. 3 days later its gets sold off on higher Volume to the low of the range

Not sure what to make of the recent price action but it doesn't feel quite right until there is more info released.