Jump to new
U

Been looking at this for a little while, it seems promising, anyone else been following their progress/projects?
N

Been looking at this for a little while, it seems promising, anyone else been following their progress/projects?
Click to expand...

Very much a spec. One of the late entries into CSG. Had almost a 50% rise in SP during the last month,probably on the back of the CSG boom. Very few sellers so hard to buy with value. Could rise with the CSG boom. Has over 63 million shares but only 36.4 million listed.

Unless they make an amazing race to get into production I believe they will be one of the also-rans. That's my opinion but I'm often wrong.DYOR.
U

Interesting thoughts, they seem to have plenty of potential with projects in Gippsland and otway basins in Vic, Eromanga and Willorchra basins in SA, perth basin, Gunnedah basin in NSW.
The amount of land they are holding is descent??
anyone else looked into this?

Given that GPP only completed their listing in early march and completed purchaisng the tenements on 31 May, they are early days explorers.

Having said that, they have some decent looking prospects and have some very experienced management at the helm.

The company started life as Gunnedah Colliery Company Limited The current directors are experienced people . A petroleum geologist, a mining engineer, a company executive who have, together, significant experience in companies engaged in coal, oil and gas exploration and production. GPP is now a coal seam natural gas exploration and development company, with rights to areas in aggregate exceeding 2 million hectares of potential CSG tenements across Australia.

They bought Planet Gas's CSG assets (Planet bought them from Connoco Phillips) to list and have a Planet Gas board member. only 14m shares available of the 63 as previously stated make them pretty thinly traded ala PES.

These guys are my Vic and WA play for CSG plus they have assets in NSW and SA. See below for a brief description out if their prospectus.

Maybe they should do a 3:1 split to loosen them up a tad? They have gas at a lot of their tenements although the SA olay is totally green so will either be a dud or a uncalculated asset.

Also there is a bit of information here re CSG in Australia which is informative although it is research form 2006 which i liked because it is pre hype.

• The Gippsland Basin Project, located in Victoria to the southeast of metropolitan Melbourne, between Dandenong, Wonthaggi, Leongatha and Moe, covering an aggregate surface area of approximately 4,908 square kilometers. The CSG potential lies in the black coals of the Early Cretaceous Strzelecki Group. Available data indicates the areas are prospective for CSG;

• The Otway Basin Project, in Victoria, adjacent to the South Australian border, alongside the route of the South East Australian gas pipeline. The Project covers a surface area of approximately 1503 square kilometers. As known coal seams occur down to depths of around 1000m, both thermogenic and biogenic methane can be expected;


• The Eromanga and Willochra Basin projects are two license applications in South Australia, SAPELAs 145 and 146, which cover a surface area of approximately 8,876 square kilometers. These are greenfield projects where no CSG exploration has yet been undertaken;

• The Perth Basin projects, EP 425 (62,000 hectares), lying along the Western Australian coast, (near Green Head), contains a substantial coal seam methane (CSM) resource in Permian-aged coals of the Irwin River Coal Measures and EP 447, (76,500 hectares) situated at Walyering contains substantial amounts of gassy coal in the Upper Coal Member of the Early to Middle Jurassic Cattamarra Coal Measures; and • the Gunnedah Basin project which is a joint venture 20% interest in PEL 428, which covers a surface area of 6,021 square kilometers and contains the Coonarah Gas field and the Bohena coal seam gas pilot.

Of a more general interest i have attached a document which gives a little information on CSG plays.

Pity this one is so thinly traded.

Announcement out re drilling agreement for the Gippsland.

These guys have two million hectares of tenements in three states including the current flavour, the Gunnedah Basin. Also have a partnership in China with Fuxin Mining to assess coal bed methane extraction.
S

I've been buying into the csg sector for quite a while. I'm an ethical investor and what motivated me was that the Co2 in csg is actually less than natural gas because most of the Co2 stays in the coal. We don't seem to hear much about this! With the International ETS looming , a lot of big energy cos will be wanting to offset their carbon emissions so we'll see more big international sugar daddies buying in I'm sure.

I bought into Queensland Gas when they first listed @ 0.20. The only way to make any real money in this game is to buy the start-ups at their cheap list price. I bought at Greenpower IPO and topped up at 0.08. They want to be another QGC - in it for the long term - prospecting, producing and marketing. They certainly have the expertise. Alan Flavelle is one of the most experienced in the business having spent years in the US where the technology was developed. I'm happy to wait the 8 years it's taken for QGC.

By the way, I notice that the CSG sector has three KINGS: Grant (ORG), David (ESG) and Gerard (GPP). Related or is this an omen? The 3 Wise Men back following another star? Hope so!
U

Im surprised to see this end up in the red especially after an announcement which i thought was good?

I agree with your Abyss baffled to why its so lightly traded.

What do you think next week holds for us?
C

Uahamad, Its a positive announcement in that their exploration activity will possibly be sped up as a result and the associated cost perhaps not as great had they progressed on their own steam.

As Nioka said GPP has run pretty hard over the last month or so (like 100%!!), like a lot of other CSG companies so you'd have to expect a little re tracement before the likelihood of it running again. I would expect some firm news as to its progress before it kicks on like it has in the immediate past.

As for how it will go next week? Will be dictated somewhat by the market in general which has been pretty choppy over the past few days.

From a technical perspective its has a pretty ugly looking black candle on Fridays close and the previous 3 days were pretty average as well.

I'll be keeping an eye on it though.

I don't hold this one but am having a ball with LNC having bought a basketfull at 80.5c

Announcement out today with 2C contingent reserves of 1.63 TCF of coal seam gas over in WA. What do holders think of the depth at nearly 3000 metres. Has anyone been successful with extraction from these depths?

Field fracture permeabilities within the prospect areas are likely to be sufficient for the development of economic gas flow rates, notwithstanding that many of the listed prospects have depths of over 2,000 metres. Continuity of seismic reflectors over the prospects is broken indicating substantial fracturing. Structural interpretation suggests that the prospects are in tensional settings, rather than compression, so fracture permeabilities should be sufficient to enable economic flow rates.
Click to expand...

Might be a bit difficult at these depths. Any opinions?
U

Wow this one really took of today with the annoucement.

Grace you would think it would be difficult to extract at those depths espcially for a baby company like GPP, certainly isnt reflected in the SP today though.

I can't seem to access their site since yesterday
C

so no one holds/ is trading this illiquid stock.

has woken up on back of EGO run, with large tenement north of Red Gully gasfind.

also did a deal in Victoria and expecting $2.8m cash payment and 10% royalties

has a JV on EP447 for 3D seismic which has the big upside, and is most likely reason for surge and volume interest Fri/Mon


EV is still negative on all else that they own, no debt.

Need an announcement on the WA tenement with UIL for Gas.
Same trend and coals (Cattamarra) as EGO

Update on O&G JV with UIL on EL447 (Perth basin) due by end May. New Seismic plan and drill plan to be announced.

Anyone with a company like to backdoor this for the $67m in accumulated losses?

Cloud9 said:
Update on O&G JV with UIL on EL447 (Perth basin) due by end May. New Seismic plan and drill plan to be announced.

Anyone with a company like to backdoor this for the $67m in accumulated losses?

WOW.
A long time since this was discussed.
My fav at the moment.

3 seriously good projects now.
Looking for news in near term.

Been watching this for a while.

Fun and games over the weekend. They were told last Wednesday they failed to qualify for a Govt grant but didn't inform the market until Friday well after closing.

But today they counter it by announcing a 2% Li2O grade at Turesi Ridge.

Buys and sells are loading up - so it's a lottery

40% rise off the back of some positive rock chip samples is not something I can get keen on just yet. 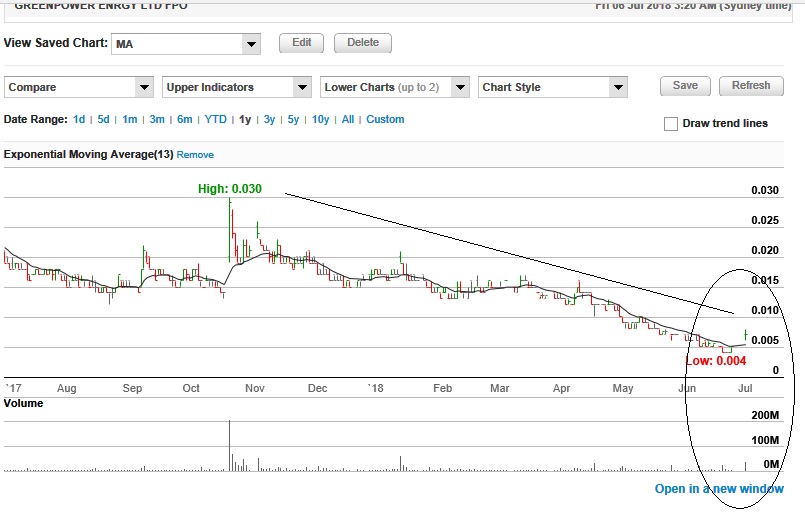 Anyone have a view on the new gold results? My back of the envelope says 80k oz in yesterday's reported drilling so very conservatively 2g dirt with a $200 margin a tonne, the in ground value would be at least 75% of the current market cap, surely that means some kind of re-rate on the cards. Haven't looked at distance to infrastructure.