FTA with China - so much for "Free" Trade

If it suits the Chinese Central Committee, they stifle imports by slapping a tariff on imported goods. This should always have been a concern, but was conveniently overlooked by our negotiators and political elite.
What I have difficulties understanding, however, is the time it took our Market Experts to consider the ramifications. Even though the 11.9% impost had been flagged weeks ago, our Dairy and Health supplement stocks continued their rallies with gay abandon.
Stocks that may/ will be affected and have only woken up to the threat AFTER it came into force, include:

even though some of them (esp. CZZ) should be able to minimise the impact because their primary markets are outside of China, e.g. Malaysia and Singapore.
I also kept 1AG, on the assumption that companies with local outlets (e.g. "Capel Dairy" signs in Shanghai) would be exempt. Maybe I was wrong there too and have to pay the price. C'est la vie :1zhelp:

China Dangles a Potentially Harmful New Threat in Trade War
Raising stakes in trade fight, China hits back at US by threatening to cut off supplies of key minerals.
By Associated Press, Wire Service Content May 29, 2019, at 5:11 p.m.

WASHINGTON (AP) — Facing new trade sanctions and a U.S. clampdown on its top telecommunications company, China issued a pointed reminder Wednesday that it has yet to unleash all its weapons in its trade war with the Trump administration.

Chinese state media warned that Beijing could cut America off from exotic minerals that are widely used in electric cars and mobile phones. The threat to use China's rich supply of so-called rare earths as leverage in the conflict has contributed to sharp losses in U.S. stocks and sliding long-term bond yields.

For months, the world's two biggest economies have been locked in a standoff over allegations that China deploys predatory tactics — including stealing trade secrets and forcing foreign companies to hand over technology — in a drive to supplant U.S. technological dominance.

The Trump administration has imposed 25% tariffs on $250 billion in Chinese imports and is planning to tax the $300 billion in imports that have so far been spared. And it escalated the stakes this month by putting the Chinese telecom giant Huawei on a blacklist that effectively bars U.S. companies from supplying it with computer chips, software and other components without government approval.

The U.S. claims Huawei is legally beholden to China's ruling Communist Party, which could order it to spy on their behalf. Washington has offered no evidence that the Huawei has done that, however.

Huawei is trying to beat back one punitive U.S. measure in federal court. In a motion filed late Tuesday in eastern Texas, the company argued that a 2018 law that bars it from selling telecom gear to U.S. government agencies and contractors should be struck down as unconstitutional. The move for summary judgment in a case filed against the U.S. government in March says the law violates a constitutional prohibition against "trial by legislature" of individual entities. Congress thus acted unconstitutionally when it "adjudicated Huawei's guilt and blacklisted it," the motion argues.

An attorney representing Huawei in the U.S. case, Glen Nager of Jones Day, asserts that Congress alone cannot constitutionally impose punishment on an individual company — which the punitive law does in singling out Huawei by name.

The law "is intended to drive Huawei out of the U.S. — i.e., to banish it," Nager argued. It "stigmatizes Huawei as a tool of the Chinese government" with no right to a fair hearing, he added.

Steven Schwinn, a professor at John Marshall Law School in Chicago, suggested that Huawei's arguments fall short constitutionally, and "given that this relates to national security, we can expect the courts to be fairly deferential to the government."

The nationalistic Chinese newspaper Global Times warned that China has plenty of ways to retaliate against the United States, including the threat of cutting off supplies of rare earths. China last year produced 78% of the world's rare earths, according to researchers at Bank of America Merrill Lynch.

If the U.S. fails to exercise restraint, it will see that "China is far from running out of cards, and we have the will and determination to fight the U.S. to the end," the paper's editorial said. An official of China's top economic planning agency did not rule out using rare earths as a countermeasure against "the U.S.'s unwarranted suppression."

China has used rare earths as a cudgel before. Five years ago, the World Trade Organization slapped down China's attempt to restrict the export of rare earths, rejecting its claim that it just wanted to protect the environment and conserve supplies. Instead, the move appeared to be aimed at hurting Japan with which Beijing was having a diplomatic tiff.

Scott Kennedy, director of the project on the Chinese economy at the Center for Strategic and International Studies, said the Chinese might benefit even less if they try to weaponize rare earths again.

"It's not the threat that it was ... when the Chinese threatened to cut off the Japanese," he said.

First, users of rare earths have stockpiled the minerals for a "rainy day." Second, they also have figured out how to "use less rare earth to achieve the same results" in such products as lasers and magnets. And third, different minerals and chemicals are increasingly being used as rare earth substitutes.

Kennedy predicts that once investors have "realized the threat wasn't as dire, markets would bounce back."

Still, he isn't optimistic about the U.S.-China trade negotiations, which broke off May 10 after an 11th round of talks failed to produce an agreement. U.S. officials accused the Chinese of reneging on agreements they'd made in earlier rounds.

"The Chinese first are going to have to signal they will talk," he said. Then they will have to go back to where they stood before they backpedaled on earlier concessions. "I don't see any body language from the Chinese that they're about to do that," Kennedy said.

They've been throwing that threat around for a decade or more now. 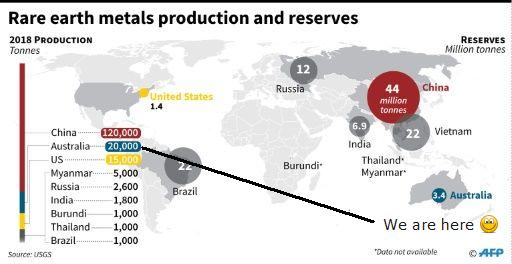 Storm clouds from Donald Trump's trade war with China could see the sun rise on a new industry for Australia.

In the tit-for-tat trade war, China has made veiled threats to withhold access to its processed rare earths.

That has seen the US and other Western countries scrambling to find new, reliable sources of the 17 minerals vital for everything from iPhones to fighter jets.

Processing rare earths is expensive and polluting so, up to now, it has been something developed nations have been happy to send offshore.

But that history of relying on China now has buyers nervous and Australian miners are hoping that adding value to their product will give them the upper hand.

Miner Northern Minerals is piloting facilities in Western Australia to not only dig up rare earths ore for export, but to partially process it.

"There is no question we need to act quickly and work out a way how can we accelerate this," Northern Minerals managing director George Bauk told The Business.

The Western Australian miner is piloting facilities at its Browns Range project, south-east of Halls Creek, to separate dysprosium from its surrounding ores.

Mr Bauk said the world has allowed a "constipated supply chain" to develop out of China.

"We really have to get into separated rare earths and that way you can really access global markets, not just China," he said.

The world's second-biggest economy has about 40 per cent of global rare earths reserves but controls 90 per cent of the market, from mining through to processing.

It is also a major player in the supply chain, manufacturing items such as rare earth magnets, which are vital in technology including electric vehicles.

"We want to have as little exposure for ourselves as a company to that supply pricing being dictated by anyone else.

"We're happy to be part of a global market, but we're not happy to have terms dictated to us that we can't avoid."

Alkane Resources is focusing its attention on rare earths production at its Dubbo project.

It recently invested more than $1 million to develop technology that will convert separated rare earth minerals into magnet metals.

'This is a further value add that we are hoping will entice customers to engage with us and commit," Mr Earner said.

"It will allow us to produce metal and that's an important step in the supply chain."

Economic boost
Developing the rare earths supply chain in Australia could be a massive boon to the economy.

Professor Dudley Kingsnorth is one of the world's leading minds when it comes to rare earths.

He said Australia is already the best-placed country in the world to try to grab some of the estimated $3 billion to $5 billion in raw rare earths production.

However, he argues that doing more than just digging up the dirt containing rare earths could inject a much larger amount into the economy.

"$100 billion is what could ultimately be achieved in Australia, but that would take 10 to 15 years to do," he said.

"But that's the sort of value we're talking about."

To capture all that value requires doing more than just processing the raw rare earths — it also means manufacturing final products that use the materials.

"China is going to remain the dominant supplier. But I do believe we can develop some independent supply chains so their dominance will fall from say 90 per cent to 70 per cent."

Expanding beyond being a quarry is something Dr Chris Vernon at the CSIRO has been looking into too.

"If Australia could develop that rare earths industry, then we could be making significantly more money out of what we currently export as a raw concentrate," he said.

"Any time you go up the value chain, you are creating value.

"So, going from the dirt in the ground to a concentrate is a small increase in value. Going from concentrate to the mixed oxides, that's another leap up the chain.

"When you start making magnet metals, that's a very large leap up the value chain."

New manufacturing sector
While a renaissance in the car manufacturing industry is unlikely, smaller items using rare earths, like vacuum cleaners and air conditioners, could end up being manufactured here too.

"We can't go as far as perhaps attracting the automotive industry here, but I like to think perhaps we can attract Dyson here and some of the air conditioning manufacturers to Australia to produce that equipment here," Professor Kingsnorth said.

That is a huge potential new industry for Australia.

"There's almost nothing that you can hold in your hand that's a piece of technology that doesn't have some rare earths," Dr Vernon said.

Give me a call when we have a manufacturer setting a new factory here.. but rare earth yes..probably sadly just as ore in a ship
I own some ARU....
You must log in or register to reply here.