EROAD generates Recurring Revenue from charging customers for its services and also receives revenue from hardware sales of Ehubos, as well as other sources. In 2009, EROAD implemented the world's first network-wide GPS/cellular-based road user charging system, which modernised the existing paper-based RUC regime in New Zealand.

The Company undertakes design and manufacture of their Ehubos, as well as software development, from their headquarters in Auckland. EROAD has created a cost effective and scalable solution based on cloud architecture, web processes and partnerships with global infrastructure providers.

It is anticipated that ERD will list on the ASX during September 2020.

ERD shows a promising start to it's ASX listing. 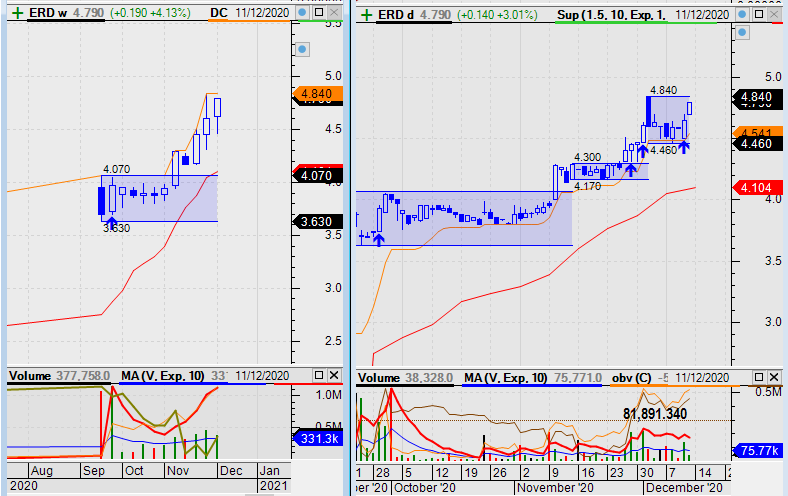 Very little analyst coverage. A quiet achiever that will only benefit from more investor awareness.

The hardware component to the services is a concern but currently valued on modest revenue multiples.


EROAD released its financial results for the first half of the 2021 financial year.

• EROAD grew contracted units by 5,705, while keeping ARPU and asset retention stable in the six months despite challenging macro-economic conditions

“EROAD delivered a 19% increase in Revenue and 29% improvement in EBITDA period-on-period. In a period of extreme uncertainty and operating restrictions across our markets, the continued growth in contracted units, stable SaaS Average Revenue Per Unit and asset retention rate is reflective of EROAD’s strong customer value proposition.” said Steven Newman, Chief Executive Officer.

Looking ahead to the second half of the financial year, EROAD is anticipating a small increase in revenue compared to the first half. EBITDA is anticipated to be similar to the first half’s figure (adjusted for one-off items) reflecting the acceleration of product development and increased sales and marketing costs associated with the launches of key products.

For FY22, EROAD anticipates that the percentage revenue growth in FY22 will strengthen, but not be at the level experienced in FY20. As EROAD continues to accelerate new product delivery for future growth in FY23 and FY24, it anticipates spending 24-27% of revenue on R&D during FY22. However, the company anticipates EBITDA margin to be maintained but improving at the end of FY22, to provide further increased EBITDA margin.

See the links below for more details:

Bought today's new high (BO-NH) on ERD. There's very little on the ask and very low volume traded each day.
It's a sleeper as @kenny said.