III ... expecting a positive move next week, that may take the market
by surprise ... ???

have a great day

The Tungsten space is one I like as there is strong demand and not a hell of a lot of it.

Production will start in March.

They have an off- take agreement letter of intent with Mitsubishi

Recent drilling has revealing a much larger deposit than was first disclosed. There should be an updated JORC by Easter.

Has an IPO ready to go for 4 or its gold tenements called Gossan Hill - GSN. I believe they will retain 25% stake in this one.

They own several other tenements around the place for future development or JVs.

Talk of a small capital raising, a delay and cost overrun in finishing the production plant as well as a change in CEO has caused a recent retracement in share price.

Edit the previous post FRY is copper and Zinc and
not copper & gold.
The code for Gossen Hill is GOS.
R

Production to start in 2 weeks, so anyone who wants into this one - now
would be a good time.

Management has invited all shareholders for a site tour and a drink.

Warret Buffett will not touch gold, but he just bought a tungsten mine(not this one)

I was sent this unfinished commentary from a friend of mine yesterday. However, unusually he didn't send me an internet address to read the finish of the article. Given that Joe (Blow), you are more than welcome to remove it if you are concerned about it.

Mitsubishi Signs Off On Funding

Carbine Tungsten has announced that its key project partner in Mitsubishi has completed its due diligence and has signed off funding of the project. The funding will see the company now move to advance the first phase of the development of the Mt Carbine tungsten project in Queensland.

Mitsubishi has completed its due diligence's of the Mt Carbine project and has agreed to advance the company US$15 million including the prepayment advance of US$1.0 million. The advance will be secured by a 2.7% equity interest at the project level in the Mt Carbine project. Negotiations to finalize the loan details and signoff are now underway, with completion expected during the current month. We consider the funding sign off to be a major milestone in the company’s push to develop its Mt Carbine tungsten project.

Operations will ultimately be ramped up to 157,500 mtu per annum at 3.0 million tonnes of ore feed from the stockpile. Stockpile mining is anticipated to commence in early 2015. The A$15 million stage 1 capital cost forms part of the A$55 million definitive feasibility study (DFS) estimate for the Mt Carbines total development costs. Stage 2 will see the company move to develop the hard rock component of the project. The total A$55 million plant when built will be capable of processing three million tonnes of ore per annum, to produce 261,550 mtu of tungsten per annum. Operating costs have been estimated at A$137 per mtu. Based on the DFS tungsten price of US$290 per mtu and a discount rate of 8%, the project generated a net present value (NPV) of A$161 million with a payback period of 1.5 years. The exploration target for the Mt Carbine deposit is 12 to 16 million tonnes of ore graded in the range 0.08% to 0.16% tungsten. The known mineralisation remains open along strike and at depth. We believe the characteristics of the Mt Carbine deposit, offers the potential with further exploration to deliver additional tungsten resource.

he company will likely return to serious exploration of the Mt Carbine deposit and adjacent regions following the commencement of production. The company has identified two other prospects in proximity to the Mt Carbine mine, in Iron Duke and Petersen’s Lodes. Both the Iron Duke and Petersen’s Lode prospects are not included in the current exploration target or resource numbers for the Mt Carbine project. Mineralisation at the Iron Duke prospects has an average true width of eight metres with an average grade of 0.32% tungsten. Mapping of the deposit at iron Duke indicates a strike length 2.2 kilometres. The company plans to drill out Iron Duke at a future date.

Exploration is less advanced at the Petersen’s Lodes. The mineralisation is estimated to be ten metres wide with a strike length of 1.3 kilometres. More detailed exploration is planned. We believe both prospects, and certainly Iron Duke, offers prospective blue sky to the potential already in the ground at Mt Carbine. At 30 June 2014, the company had a cash resource of A$2.1 million. For the just finished September quarter 2014, the cash budget was forecast to be A$710,000, with A$500,000 earmarked for development activities. The company will, prior to the end of October 2014, report its cash position at 30 September 2014. We consider the company is adequately resourced to complete all its current undertakings. Certainly, the injection of the Mitsubishi debt funding will significantly swell the company’s available cash.

Please be advised that this isn't a recommendation - so please do your own research before either purchasing or selling of this stock.

SEI breaking out of its two month long consolidation pattern today. No news announced since 28 February so today's move is a bit of a mystery. 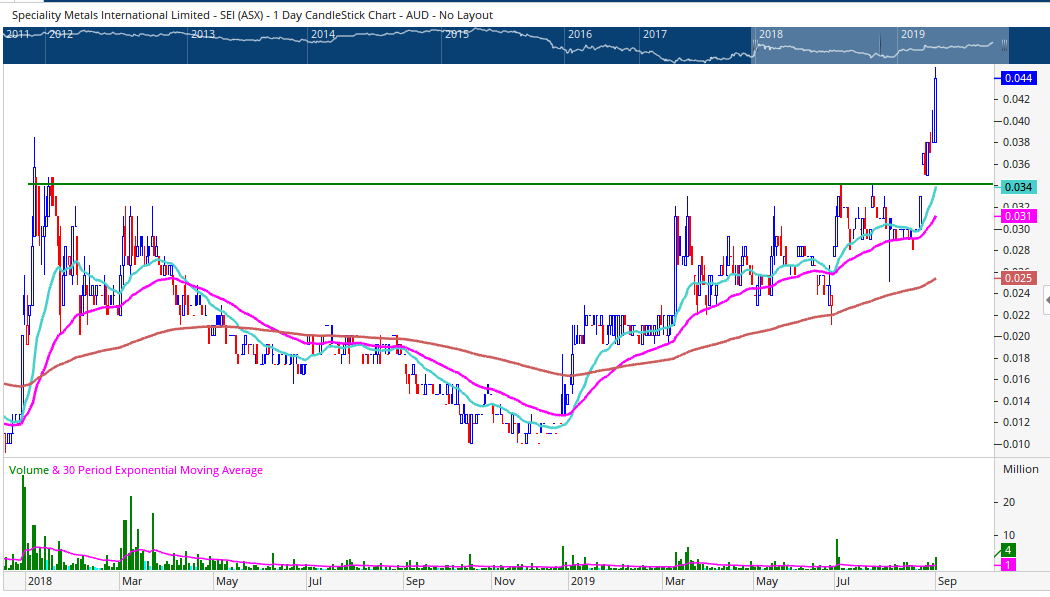