No thread thought id start one.
Currently holding. got them at 0.22 currently 0.18
just a matter of time i think till these shares go up. Anyone got any thoughts on these or have shares in them.

dan6169 said:
No thread thought id start one.
Currently holding. got them at 0.22 currently 0.18
just a matter of time i think till these shares go up. Anyone got any thoughts on these or have shares in them.
Click to expand...

Why not provide some detail as to what they do, where they operate etc etc

Why do you think they will go up? What reasons do you have? Or is it a blind guess?

Exploration of Gold, Iron and Uranium

Not just exploring one aspect of the market and the current projects they have going, if results go well should have a positive affect on share price.
Got the share tip from a frien who thinks it has pottential and from what i read of there announcments seem positive but like all explorations come down to results.

ENT Trading Halt ...... awaiting release of exploration results from Doolgunna Project. I'm guessing these might be soil sampling results, but to call a trading halt on them makes me wonder whether they might be quite impressive!! All speculation of course, however, all will be revealed by Tuesday at the latest. They seem to have flown under the radar in many respects in the Doolgunna region. They have been accumulating an impressive land holding in that area.

nice little announcement... Market is ignoring it at the moment!

Anyone know when they will starting drilling at Doolgunna next?
D

AussiePaul72 said:
Anyone know when they will starting drilling at Doolgunna next?
Click to expand...

Fraser Range Project: HeliTEM Survey Commenced
• Heli-borne geophysical survey commenced 3rd April over Enterprise’s 100% owned Fraser Range (WA) tenements.
Enterprise Metals announces that Fugro Surveys has commenced a 1,400 line km HeliTEM survey over parts of the project area to accelerate the Company’s search for massive Ni/Cu sulphides. The HeliTEM survey is designed to cover areas of anomalous soil geochemistry, several identified magnetic targets and some areas where soil sampling may be ineffective. The Fugro HeliTEM system is considered to be the most powerful helicopter time-domain electromagnetic system in the world.
Ground follow up (including prospecting and mapping) of the previously reported soil geochemicaltargets and any HeliTEM targets identified will commence in mid April following the completion of the airborne survey. It is expected that targets will be followed up with ground IP or EM, and subsequently drill tested in May/June 2013 following heritage surveys and Department of Mines and Petroleum approvals.

ENT playing the nearology card with SIR, as they have done with SFR in the past. SIR's Nova is some 40km north of ENT land.
This is not to rule out the chance their tenement is prospective, but the market says otherwise in determining ENT's SP at the moment at 12.5c (MC - $27m).

Surprised (again) to see another stock that has gone apparently unnoticed here at ASF, especially as has gone up from 5c - 18.5c in four days including a trading halt.

Here is the ASX link to obtain the last 3 announcements - http://search.asx.com.au/s/search.html?query=ent&collection=asx-meta&profile=web

If you want to potentially bet anything on this stock, bet on them being investigated by ASIC.

FROM 4.7c to 25c when the company announces assays not due for 2 weeks.

There could be some serious recriminations here.

There is more to this but best not to say at this point.

Proper process should take its course.

Crikey, very dusty thread.
Cough cough.
Here's a 3 month chart.
Gappy, risky, but something is going on. Worth an eyeball perhaps? 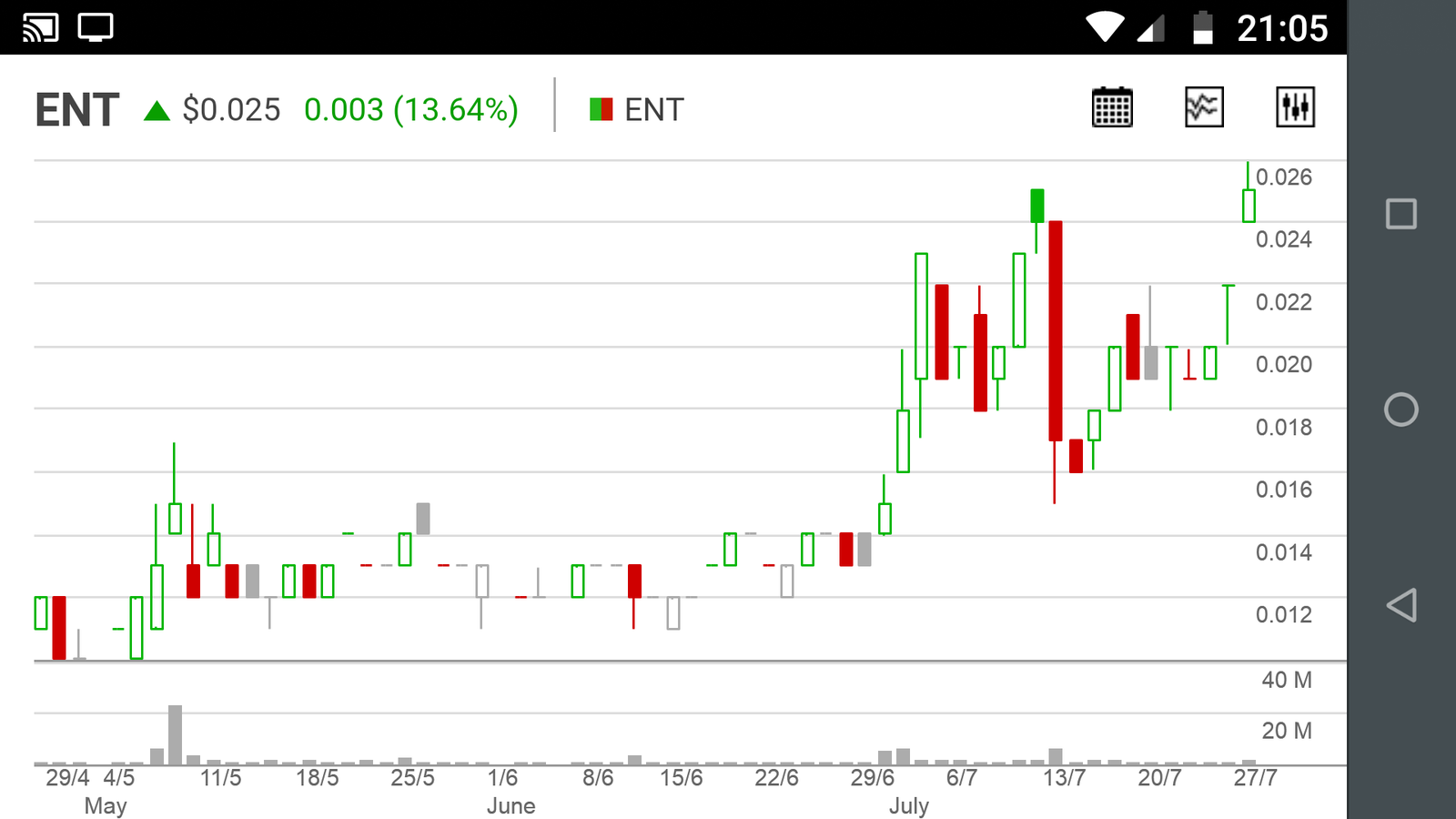 So many Specs are moving slightly "irrationally". I fear a fair dinkum correction may be around the corner not too far down the track.

Enterprise Metals share price surging this morning after the company reported elevated lithium results in soil sampling over the Matheson Pegmatite on the Bingin Peninsula in WA.

Curiously, this announcement has been released just before the close of a capital raising (non-renounceable entitlements offer) which has been extended until 3 March. 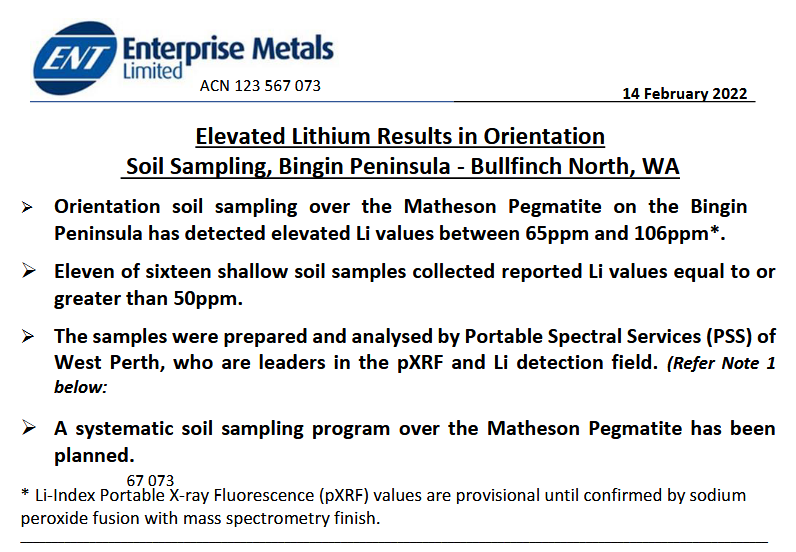 And out with another timely lithium announcement.
Is there anything in this one?
Charts not too convincing, however it may be the start of something down the track, depending if they are finding something decent.
Who's our resident lithium expert?

frugal.rock said:
Who's our resident lithium expert?
Click to expand...


Definitely not me, lol.

The lads will need a bit of a cap raise not too far down the track so any price spikes might need to be treated with appropriate caution.