Any clue on this share, Gold is going up but this share still not moving up?
The last announcment was AAO done the drilling which the result will be out end of this month.

On July 18, 2011 Australasia Consolidated Limited will change its name to Adept Solutions Limited.

Australasia Consolidated Ltd (ASX: AAO, Australasia) is pleased to announce it has successfully secured all requisite approvals to transform into a financial services company through the acquisition of Emerchants Limited (Emerchants) and a number of other supporting initiatives, including a change of name to Adept Solutions Limited.

Australasia’s shareholders overwhelmingly supported the transformation by voting in favour of all resolutions proposed at the Extraordinary General Meeting on 29 June 2011.

Australasia is also pleased to announce completion of the acquisition of Emerchants, a leading issuer of pre-paid financial cards in Australia. By approving this acquisition, shareholders supported a significant change in the nature and scale of Australasia’s activities.

As a result of the acquisition, Emerchants has become a wholly-owned subsidiary of Australasia Consolidated.

Emerchants operates in a rapidly growing market, with pre-paid and debit card usage growing at approximately 20% over the past 5 years. Furthermore, closed loop cards, such as gift cards, grew by over 60% in the same period.

Australasia’s Managing Director Bob Browning was very pleased to announce the completion of the acquisition.

“As one of Australia’s leading issuers of pre-paid financial cards, Emerchants is well positioned in an industry that has an exciting future,” Mr Browning said.

“This business is poised for significant revenue growth and we expect to use the existing, scalable and highly flexible technology platform to drive superior returns for Australasia’s shareholders.”

Australasia is pleased to announce it has successfully raised $10,000,000 by way of share placement, as outlined in the Prospectus lodged with the Australian Securities & Investment Commission (ASIC) on 21 June 2011 (Prospectus). As a result, the offer is now closed.

The proceeds of the raising have been used to fund the acquisition of Emerchants and will be used to pursue its growth plans, which include expansion of the sales and marketing team, software modifications to support incremental business opportunities and the implementation of a robust marketing and promotional program.

As a result of the raising, Australasia has a balance sheet with no net borrowings, providing a strong
platform to pursue growth opportunities.
Click to expand...

Whilst this one isn't investment grade as of yet, it is a very interesting one.

Metrics are improving and there is solid insto interest based on the oversubb'd CR recently.


They have landed some good contracts and are launching many of them over the course of the second half of this calendar year.

Anybody else following this one? Its on my watchlist for now along with a heap of other new ones after the reporting season avalanch...!!!
C

Yes I take a small interest in this one-has a long way to go of course,as started up recently from nothing.
What interested me was that the CEO is Bob Browning? ex Alinta-before they sold out to Babcock and Brown.How successful their charge cards will be ?Well we will watch their financials and new contracts.I may be mean but I think they are overpriced (without looking at the recent price)

I used to have an Emerchants cash card back in 2007, it was cheap and easy to use and overall i was happy to have it...right up until (without any warning) the cards were locked out of ATM's, i had to apply in writing to close my account and get my money back, took about 4 or 5 weeks from memory.

Back then i saw some potential in what they were doing...may be worth a fresh look.


So_Cynical said:
Back then I saw some potential in what they were doing. May be worth a fresh look.
Click to expand...

They held an Investor Presentation yesterday - For the First Half Financial Year 2014. Click on link to see what was on the agenda - http://stocknessmonster.com/news-item?S=EML&E=ASX&N=670255

This came on top of an announcement last Thursday that they had signed a multi-year contract with Ladbrokes Digital Australia - http://stocknessmonster.com/news-item?S=EML&E=ASX&N=669853

They held an Investor Presentation yesterday - For the First Half Financial Year 2014. Click on link to see what was on the agenda - http://stocknessmonster.com/news-item?S=EML&E=ASX&N=670255

This came on top of an announcement last Thursday that they had signed a multi-year contract with Ladbrokes Digital Australia - http://stocknessmonster.com/news-item?S=EML&E=ASX&N=669853

Confession time, I waded in on this one before it has become investment grade. But I did a fair bit of research prior to the purchase and came out pretty confident that this will perform well over the medium term.

Tom Creagan is a smooth operator and the videos I have seen of him speaking show a man committed to his job: to gain big contracts.

I actually got lucky and got in at ~0.42 before the massive run up. Sold some recently at 70c, but I think the longer term thesis remains intact on this one and the recent Ladbrokes deal will be a good guide as to the potential of the company.

Thanks VSntchr for your feedback - much appreciated

Here is the chart that I had put in my previous post but for some reason it didn't load up correctly.

About to break out again?

Recently there have been good announcements coming through regarding contracts and an acquisition in Ireland and the share price has been seeing a nice lift as a result. There seems to be some optimism in the market regarding their FY2018 results and future prospects.

Nice breakout-type move for EML today after announcing the signing of a multi-year agreement with bet365 for payments solutions for their USA gaming customers.

EML PAYMENTS LIMITED (ASX: EML) (“EML”) is pleased to announce that its wholly owned subsidiary, EML Payments USA LLC, has entered into a multi-year agreement with Hillside (New Jersey) LLC, trading as bet365 (bet365), for the provision of a bet365 branded Reloadable card program in the state of New Jersey in the United States of America.

Under the agreement, EML will give bet365 customers an easy to use Reloadable card to both remit funds into their gaming account alongside our innovative product supporting fast access to winnings. The initial program in New Jersey is expected to launch in mid 2019 following regulatory approvals.
Click to expand...

After consolidating between $1.70 and $1.80 for the entirety of April, today's news was the catalyst that sent EML above its previous 24 month high of $1.92, which it reached in August 2018. After reaching an intra-day high of $1.995 today, EML has slipped back to $1.93 but is still seeing a lot of buying pressure.

As often has been the case Greg, you were on the money again …… Inside day today to be expected and looks like closing around $1.96 ish
R 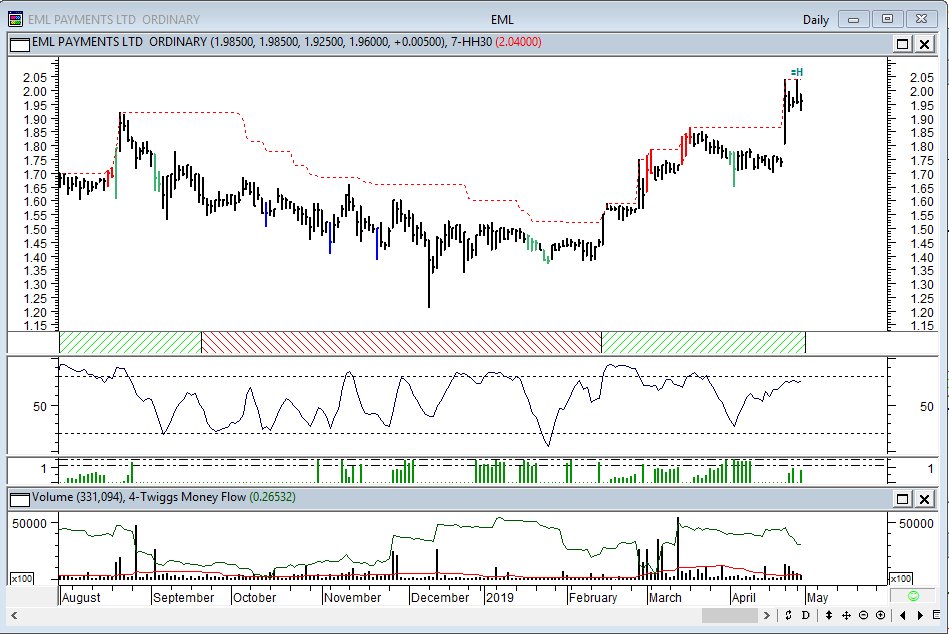 Setting up for another move higher? I guess we will find out soon.

rnr said:
View attachment 94230
Setting up for another move higher? I guess we will find out soon.
Click to expand...

Yeah …. current Volume is only modest. Anywhere above $1.95 in the short term looks normal. 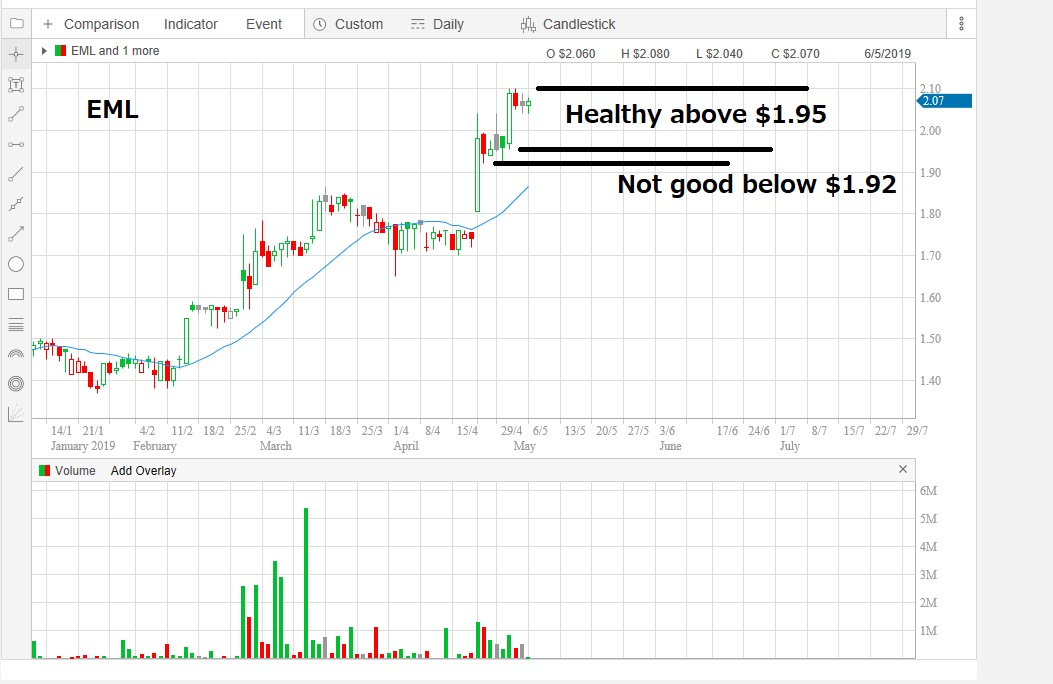 The acquisition of Flex-e-Card Limited, announced on 20 May, has sent it hurtling north on good volume!

Since late last February that has been an excellent chart though …..

Funny how it always looks simpler after the event though …. Good early call from you on this one

I also see that the $1.92 ("danger" level I noted back on May 6) was never breached …. It behaved to script from a technical point of view.