Was recommended this one early on and manged to obtain some in the initial placement at $2.15.
Thought about selling when they opened at $2.65, but missed the boat - now trading at $2.43
Will be interesting to review this one again in about 4-6 weeks when some broker reports start coming out. Early suggestions from Macquarie have it valued at around $3.00.
I'm holding
C

You still holding this one braceface? I am also on board after the crash.

yep, still holding, and will be for a while I reckon.
With more brokers looking at this one and more healthy valuations coming through over the next few months, it is possible this will continue to run.
After a few nervous days post-listing, it's now looking the goods.
Dropped 14c today to close at $3.55.
Given recent performance in a shaky market, Macquarie's $3.90 doesn't seem that far off.
DYOR on this one please everyone

Useful report catman - I've been looking at GBG and GRR as magnetite options to invest in for a while - both seem to be reaching something of a bottom... but then take a look at NFE... presentation out yesterday

Through the Board NFE have strong links with MGX, a former GM of PMM operations and the CEO of MRI Resources AG, a raw materials trading company with annual turnover of approximately $4 billion (Ashwath Mehra who also owns 6% of NFE).

Our interest in NFE is piqued by a number of its competitive advantages. Namely;
1) Millions not billions (US$ Capex) –
a dramatically lower capital intensity per annual production capacity against comparable WA based magnetite developers. NFE require US$155m for 2.9Mt of annual production;
2) Hundreds not thousands (km) –
rail from mine to port is an undemanding 8km and the project is on the doorstep of the major iron markets of Europe resulting in much lower freight costs compared with those from Australia and Brazil E.g. Malmberget A Fines from Sweden are currently priced at an average premium of 19% to the Hamersley Fines benchmark;
3) Infrastructure challenges? Not here –
Most of the mining, concentrating, rail and port infrastructure is already in place, albeit in need of refurbishment; and
4) People and Power
access to relatively cheap hydro-electric power and an experienced labour force nearby in Kirkenes, home to many ex-employees.
Click to expand...

But what is really interesting and not mentioned in the broker reports is that NFE is backed by the Norwegian Tschudi Group (51% ownership of NFE) who own the port infrastructure and have much bigger plans for the area that go beyond magnetite....

The deep water quay, approx. 400 metres long, is available for import and export operations. A refuelling quay is operated by Norske Shell AS.
Click to expand...

This then is the keystone industry for what they hope will be a major industrial park. MIS and MMX have similar intentions for Oakajee (which would benefit GBG), but the big difference here is this is not a greenfields site with all the infrastructure already there (and owned) - Imo NFE has a much higher chance of succeeding ...

Not without risks though (from ABN)

Naturally the project carries construction and commissioning risks common to the industry. The most pertinent relates to government approval required for the submarine disposal of tailings in BjÃ¸rkfjorden. The disposal method is consistent with historic practice at the project, however, alternative above ground disposal would require a longer approvals process thus risking a delay to the recommissioning of production. Operating risks will be comparatively low given the historical operational data available from in excess of 70 years of production.
Click to expand...

DYOR and let us know what you think...

Can someone help me out with these calculations - from the investors presentation..

With well over $100m in the bank and hardly any debt -this covers their estimated $100m capital investments...

My thoughts are its undervalued at these prices considering they will be mining next year. All the intrastructure is there as is the wrokforce. 2 KEY ingredients with a very low capital outlay to get it up and running. The board is top shelf.

You may also want to check out MQG's very lengthy report on the NFE site. Good bed time reading.

well bought into this and NFE is slowly building momentum - does not have the interest of the Oz-based magnetite hopefuls but I think is looking very solid for production in June09 - US investment house Fidelity just bought 5%, and they just had the last major permit issued by the norwegian govt

chart is still early days but have tried putting in some trend lines... today broke through $4

Was anybody watching when this happened?


Huge buy at the last minutes, pushed it 30c higher, the most since listed as far as I can tell, (not that good with charts yet)

Yep breaking into blue sky with strong volume looks good for monday...
My estimate above of US$1 EPS a share is about what comsec are saying for FY2010 based (i think) on macquarie equities - with all the infrastructure pretty much in place and approvals almost all provided this is in the running for the next aussie iron ore producer (even though its deposits are in norway!)

some comparison with the mid-west iron ore producers...

How is 2009 EPS of 30c pershare calculated? And whose estimate is it?
Company doesn't expect to start production until June, 2009.


56gsa said:
Yep breaking into blue sky with strong volume looks good for monday...
My estimate above of US$1 EPS a share is about what comsec are saying for FY2010 based (i think) on macquarie equities - with all the infrastructure pretty much in place and approvals almost all provided this is in the running for the next aussie iron ore producer (even though its deposits are in norway!)

some comparison with the mid-west iron ore producers...


oldblue said:
How is 2009 EPS of 30c pershare calculated? And whose estimate is it?
Company doesn't expect to start production until June, 2009.

seems to stem from the macquaries equities report which may have been updated from the one on the nfe website? which you can find at:
http://www.northerniron.com.au/images/pdfs/Macquarie_NFE_Research_Report_5_Feb_08.pdf

And correction to NFE mkt cap in message above - comsec forgets the Norwegian listed shares, so its actually 165*$4.30 = $709million

Looks like this one's been forgotten. After drifting down to about 60c, it's been recovering strongly to around $1 now.

Euroz is recommending NFE as one of its six "best buys" for March.

Kremmen, do you have a piece of this?


springhill said:
Kremmen, do you have a piece of this?
Click to expand...

Wow. Another post here! Thought it was just me.

Yes, it's looking good. I bought some when they were drifting around 80c and topped up a few days ago at $1.035, just before they announced a second potential bidder at $1.42.

I am not involved in NFE mate, just casting my eye over as many specs as I can lately. Well done to you, hope you get stuck right bang in the middle of a bidding war and that SP climbs towards that $1.40 mentioned.

I bought a few. Warning: It's pretty speculative, so DYOR

Price and Volume picking up in unison today. Yesterday's Low on tiny volume bears some promise... I hold. 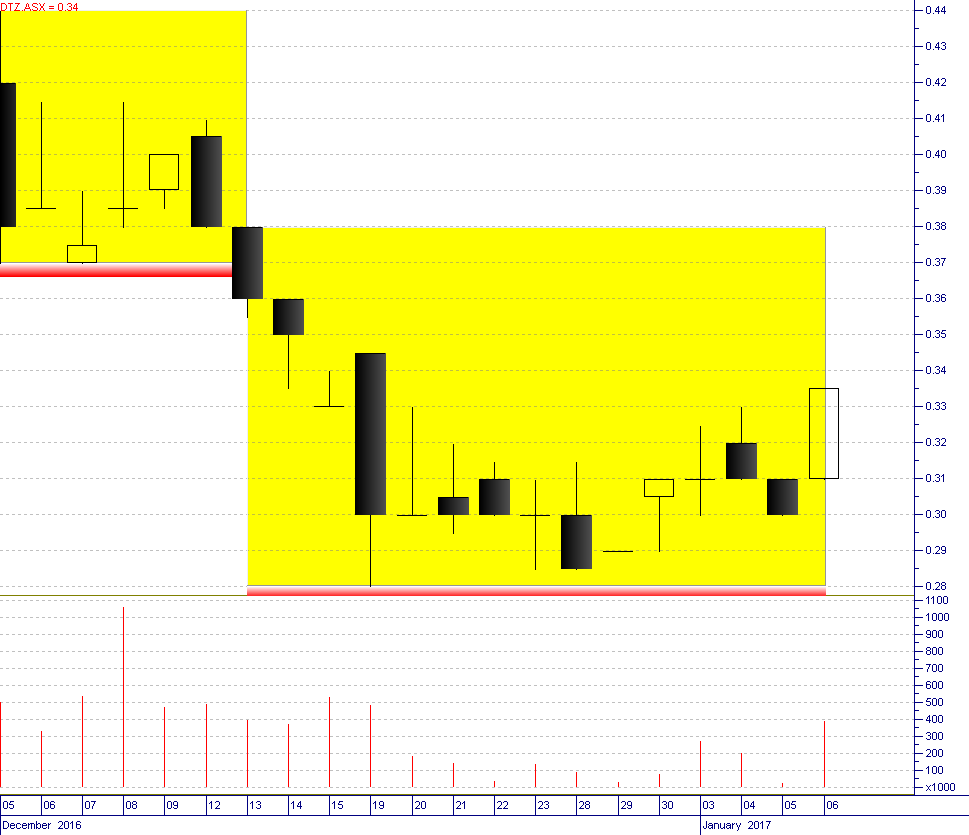