Dacian Gold Limited (DCN) is an Australian based mineral exploration company formed in 2011 to acquire the Mount Morgans Gold Project in the Laverton district of Western Australia.

Well this one went well out of the blocks, up over 20% from listing price.

It will be interesting to see how they go at Mt Morgan. The assets are quite good but the floats success is largely due to having Rohan Williams on board. The hope is that he can do with Dacian what he did with Avoca, though this time he won't have his technical team of before.

Dacian have the money to evaluate Mt Morgan and drilling is to start imminently if it has not already. If there are significant extensions to the existing ore bodies they should be able to delineate them. Watch this space, it could be a good story.

Anyone else holding this?

Currently in a trading halt for a capital raising


I added it to a watchlist last week.


At the moment, I think the Gold sector is highly speculative. Although the Indian market makes but a tiny fraction of total bullion and derivatives trading, an Indian import ban could have a significant psychological effect.

Having said that, investors with a very long-term view may consider the Fibonacci retracement over a 3-year period and look for a buying opportunity at current levels should support hold at the 61.8% level.


In and out yesterday.


i was in friday and tried to sell on the open

Hopefully no carnage will unfold

No comments re DCN for over two years.
The recent corrective pattern look complete and the next impulsive wave has started. A good BO-NH setup on the daily chart. Looks interesting enough for me to read the latest activities and cash reports.

Perhaps I could ask for a comment re DCN from @explod as I don't know the company at all.

A soundly run company and on the chart could well bounce off the 50 day average. I note a lot of volume on the two recent dips also.

In the gold stocks generally there does not seem to be a lot of weight being given to the rising Aussie gold price. Looks good to me peter2 but DYOR always.

DCN's recent Qrtly Activities and Cashflow report was encouraging (to this novice).

The chart posted earlier is part of a research project and should not be considered a recommendation to buy this stock. If you want to read more about the project log in to read the P2 Weekly Portfolio thread.

Well, well.
Down around 70 % yesterday after a sneaky sizeable profit downgrade Ann, 2 minutes before market open.
Set for a rally today?
Me thinks from close price of 0.515, we might get close to 70% back up today which in real terms, is only around 25% of yesterday's behemoth loss.
Even a dead cat bounces, when dropped from that height. Meeeooowwwww.
These are my internal thoughts and I am a frog. Obviously, not financial advice. Pure frog spawn only.
FRock
C

frugal.rock said:
Well, well.
Down around 70 % yesterday after a sneaky sizeable profit downgrade Ann, 2 minutes before market open.
Set for a rally today?
Me thinks from close price of 0.515, we might get close to 70% back up today which in real terms, is only around 25% of yesterday's behemoth loss.
Even a dead cat bounces, when dropped from that height. Meeeooowwwww.
These are my internal thoughts and I am a frog. Obviously, not financial advice. Pure frog spawn only.
FRock
Click to expand...

A traders dream at the mo, I'm betting that if the pog goes up so will DCN, therefore I will probably buy more on Monday

It's Dacian Gold's turn to step up to the recapitalisation plate.

Trading in Dacian Gold has been suspended since the start of February. Arsineh Houspian

As first reported by this column, the troubled gold miner was set to launch a $100 million-odd capital raising on Wednesday to help save it.

Sources said the deal was structured as a rights issue and placement, likely split 70-30, and priced at 30¢ a share. Dacian's shares last traded at $1.40.

Canaccord Genuity and Macquarie Capital were expected to launch the deal overnight, sources said. It is understood a handful of local funds had already been locked to cornerstone the offer.

New chief executive Leigh Junk outlined the company's recapitalisation strategy to the market in mid-March. Junk said the company would have to raise equity in order to meet a scheduled debt repayment of $24.7 million due before April 30.

Other aspects of the recapitalisation strategy included implementing a new three-year mine plan and accelerating potential new sources of resource production.

The new mine plan outlined less-than-expected annual gold output and a pivot to production that is based predominantly on open-pit sources rather than underground ones.

Junk said the company also wanted to improve its working capital position, "to allow the group to pursue exploration and new mine development activities that have a high potential of success in contributing to the group’s mine plan and cash flows in the short term".

Quite tempted to sell. The previous geologist M.D, who was also chairman, raised capital amidst an utterly rosy outlook projected by him. The raised money was supposed to be entirely earmarked for exploring the magnificent prospects. So what happened to it? Used to shore up the lame u/g mining? Was that the real reason for the equity raise back then? Hope there's a class action. Leigh Junk might salvage something from the mess I guess.

How or why would they raise capital at 30 cents when the SP was $1.40 when they suspended?
How can that happen?
Bought purely off TA which has brought some small realised profit.
However am still holding a parcel which was on sell order but missed by 1 tick on closing.
Hopefully get a gap up tomorrow morning.
A monster day for gold....
XGD closed 11% up...

Today reminded me of the knife catching incident I tried in May or June last year when it crashed to similar prices, didn't end well but taught me valuable expensive lessons.

Another downgrade to production tonnage, and an increase in AISC. Lost a fair bit on this Dog, thankfully dumped it when it relisted after the trading halt, otherwise would have had even bigger losses.
Not sure how the Junk man can make this much better.

Wow, this starting to look almost good. Only another $1.15 to tack onto the current price and I'm outta here with my stake intact (average price $1.48 and that's after taking up my full 0.30 entitlement)
Two of the major concerns are being progressively allayed - the debt, now negligible and tbe f'g hedges, still a way to go on those) 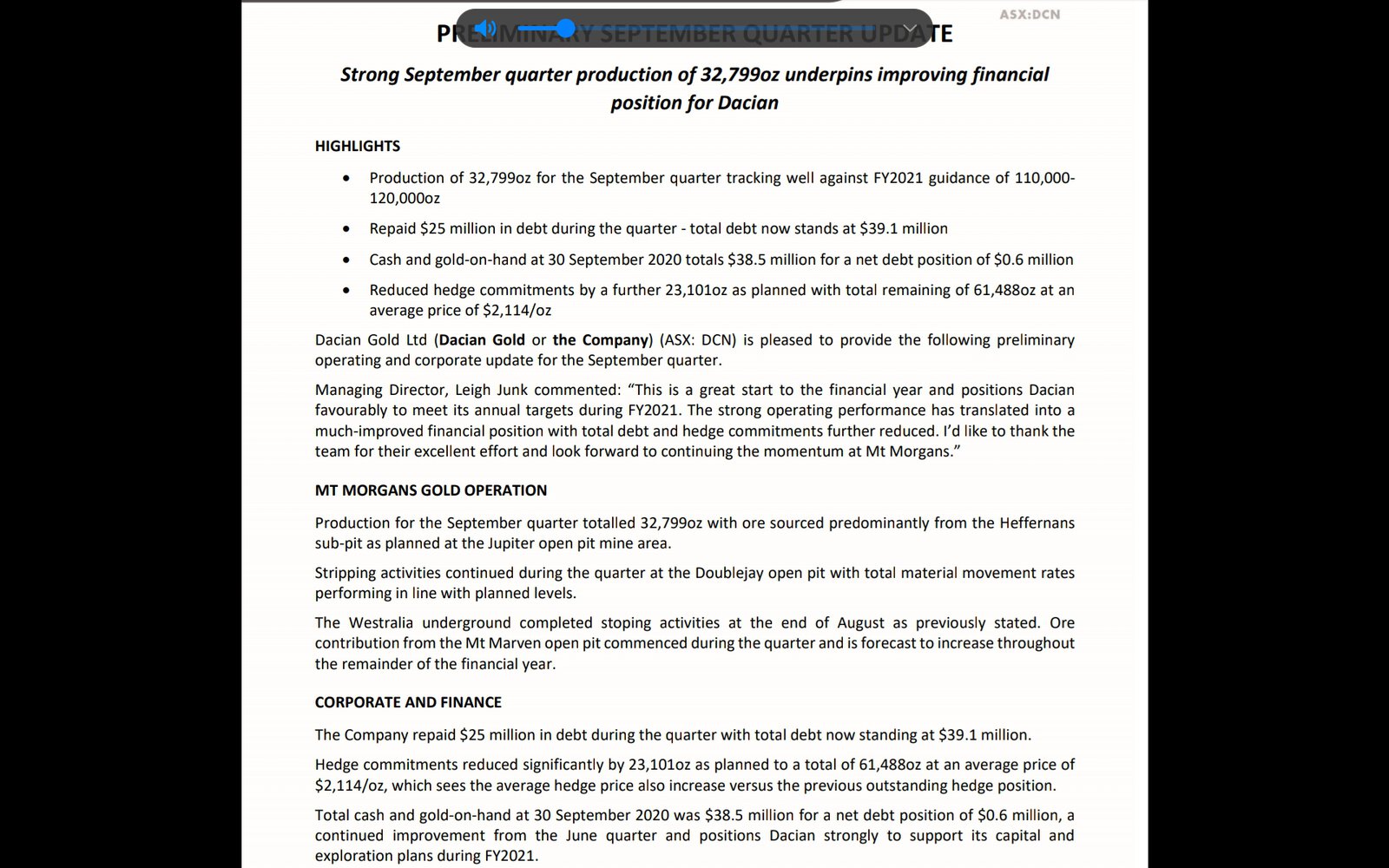 I found the recent Investor Presentation - November 4, 2020 fairly reassuring and hopeful so I tacked on another 10,000 @ 0.35, taking advantage of the dip in gold.
I am a duped victim of the original management but Leigh Junk, the current M.D, seems to have been doing his thing in salvaging something from the wreckage as he successfully did when he took over the reins of a foundering Doray Minerals and eventually delivered it profitably into the hands of Silverlake Resources.

He's paying down the debt, producing profitable metal from open pits, finding more resources and even reassessing the disastrous underground ops of Westralia to see if something can be saved from the debacle. A lot of u/g development is in already in place albeit unproductive and the company owns plant, infrastructure and tenements in a district that is studded with big gold mines - the major reason I first blundered into a premature buy before the mine was proved.

On a personal note I will be able to sell my original holding @ 2.70/share this financial year for a much needed capital tax loss but still keep a decent stake in the company with the modest hope of recovering my losses one day.

The monthly chart suggests accumulation to me, nice small bodies.

Dacian Gold will merge with NTM Gold via a scheme of arrangement under which Dacian will acquire all of NTM's shares. Under the deal, NTM shareholders will receive one Dacian share for every 2.7 NTM shares they hold. Together, the combined group will be worth approximately $255 million.

"This merger will create value by delivering on our strategy of extending mine life, diversifying our production base and increasing operational flexibility at Mt Morgans. This is a logical step for Dacian to expand operations in our region by unlocking resources within haulage distance of our substantial processing infrastructure, enabling future resource and reserve additions to be brought quickly into production," said Dacian managing director Leigh Junk.
Click to expand...

The board of NTM and two of its largest shareholders support the merger, representing a combined 32.9 per cent of the voting interest.