Anyone notice this float today ?

PRIME Minerals has made a stellar debut on the Australian Stock
Exchange today with its shares opening at a 100% premium to its 20c
issue price.

The Western Australia-focused explorer's shares opened at 40c this
morning, before climbing further to settle at 44.5c at lunchtime
today. The company raised $2.2 million in its initial public offer
and on listing had a market capitalisation of $6.5 million.

Upon listing, Prime will acquire a portfolio of projects that are
prospective for uranium, gold, vanadium/titanium and iron ore, and
the funds raised will be initially used to drill targets at the Lake
Mason uranium project and the Star of Mangaroon gold project.

"The directors currently intend that, in the first two years after
listing, a minimum of $915,000 out of the funds to be raised by the
IPO will be spent on exploration programs at these two projects,"
Prime chairman Bruce Hawley said.

Lake Mason contains a pre-JORC target mineralisation of 374,000
pounds of uranium oxide defined by aircore drilling and is some 40km
away from BHP Billiton's Yeelirrie deposit.

Star of Mangaroon was historically the "most productive mine in the
Gascoyne" and has a current pre-JORC target mineralisation of 46,500
tonnes at 17 grams per tonne gold for 25,700oz.

Meanwhile, joining Hawley is executive director Emilio Del Fante who
has provided consulting services to a number of companies including
BHPB, Rio Tinto and Ashanti Goldfields. Non-executive directors are
Vincent Hyde and Bruce Waddell with the latter also taking up the
role of company secretary.

Maiden Capital acted as manager to the issue.

yes, I noticed this one last week (too late to take advantage of the IPO) and after reading the prospectus I put it on my watch list..... and watch I did
ahh well.

is there some way of getting a list of IPO's that are coming and getting the prospectus' etc and how do you buy into them??? can i do it through comsec?

you should be able to find that kind of info at the ASX web site, it is usually on their home page or at least a link to it.
I belive comsec has a list somewhere on their site too.

The latest junior uranium explorer to hit the market is Perth-based uranium resource company Prime Minerals (ASX: PIM), which today has listed on the ASX, closing at a 190 per cent premium to its issue price, after its Initial Public Offer (IPO) was oversubscribed and raised A$2.2m.

Prime shares traded as high as 59 cents, a 195% premium of to the issue price of 20 cents, before closing at 58 cents, with more than 1.3 million shares traded.

The company issued 11 million shares as part of its IPO, valuing the company at $6.5 million on listing. In April 2007, the company will also issue all shareholders one loyalty option for one cent for every two shares held. These 20 cent options at today's trading would have a nominal value of 48 cents and will be immediately listed after issue and expire in October 2009.

Prime chairman Bruce Hawley said the company was pleased with its outstanding debut. “Funds raised during the IPO will be used to complete the radiometric survey of the Lake Mason uranium deposit and our drilling campaign,” Mr Hawley said.

“We are glad the listing process is now complete and we will now turn our attention to exploration at our Lake Mason project. This is an exciting time for Prime and we anticipate an aggressive drilling campaign starting shortly after next month's radiometric survey is completed.

"We also plan to carry out target generation over our iron ore, vanadium and gold tenements, followed by drilling of the priority targets.

"Prime will also be targeting the acquisition of complimentary projects, with the view of increasing shareholders wealth" Hawley said.

Announcement just out about a joint venture with FXR

3rd January 2007 when the above comment was made, so as not to mislead.

Such is life I suppose and I only picked it at a lowly 6.1c because of a PE of under 4 and EY of 30, for the stock competition. Someone seems to have offered stock at 15c and I have a feeling in my waters that many buyers will arrive - well one turned up in the month of July so far.

Any news on the reverse takeover?

The subsequent pullback had the effect of creating a new Darvas Box with today's candle seemingly confirming the initial assessment. Low volume should be less of a concern at this time of year; it's probably worth holding into 2016 to find out which German Major they're talking about...

A Close below 29c is still my stop.

It looks like we can get another swing trade working.

Covata Limited making some gains over the last week.

On 21 March they announced that they have entered into a strategic alliance with German-headquartered dataglobal and will acquire certain rights to dataglobal's intellectual property relating to data classification and analysis and enter into a worldwide OEM agreement for the entire dataglobal product suite. 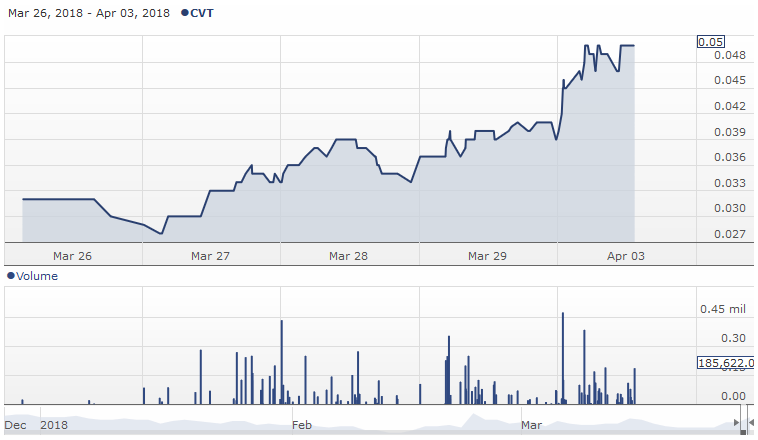