Cooper Metals Limited is a minerals exploration company that was incorporated on 2 February 2021 for the purpose of identifying, acquiring and developing prospective copper, gold and base metal assets throughout Australia. The Company has entered into the Acquisition Agreements pursuant to which the Company will acquire (subject to satisfaction of the conditions precedent):

(a) an 85% interest in the Mt Isa East Project which comprises five granted Exploration Permits for Minerals covering a combined area of approximately 1,300 km2 in the Mount Isa district of north-west Queensland which are considered to be prospective for copper and gold;

(b) a 100% interest in the Yamarna Gold Project which comprises two granted exploration licences covering a combined area of approximately 173 km2 in the Yamarna district of Western Australia, which are considered to be prospective for gold; and

(c) a 100% interest in the Gooroo Gold Project which comprises one granted exploration licence covering an area of approximately 152 km2 in the Yalgoo Shire of the South Murchison District of Western Australia, which is considered to be prospective for gold and copper.

It is anticipated that CPM will list on the ASX during October 2021.

An Australian-based mineral exploration company focussed on the discovery of copper and gold.

After bottoming out at 16c post-listing, Cooper Metals has made a strong comeback, having recently hit 40c. The news has been very sparse of late but yesterday they received a speeding ticket from the ASX. In their response they suggested that CNB's drilling results at the Greater Duchess Copper Gold Project are likely to have had a positive impact on their own share price.

Nearology a factor for CPM? 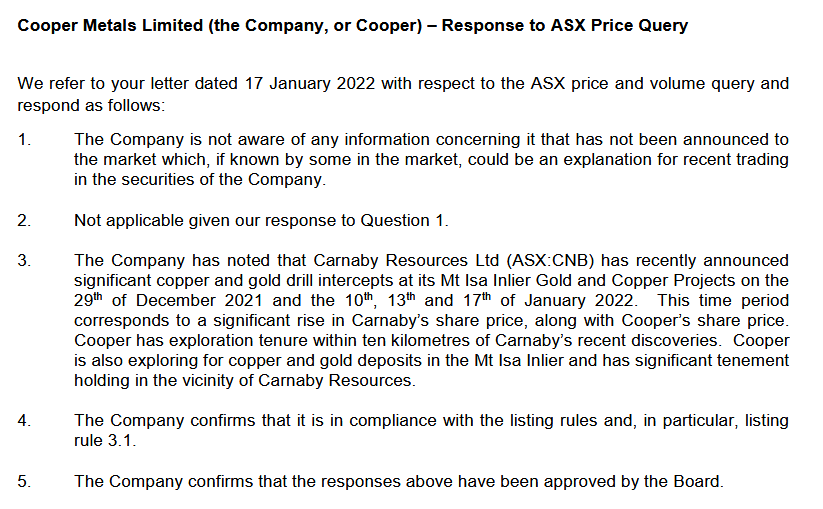 Some bullish sentiment surrounding Cooper Metals at the moment, a lot of it due to the exploration success of CNB at its Lady Fanny and Nil Desperandum prospects.

Infill rock chip sampling has confirmed the prospectivity of the Mount Isa East Project with high grade samples across the entire 1200m strike. 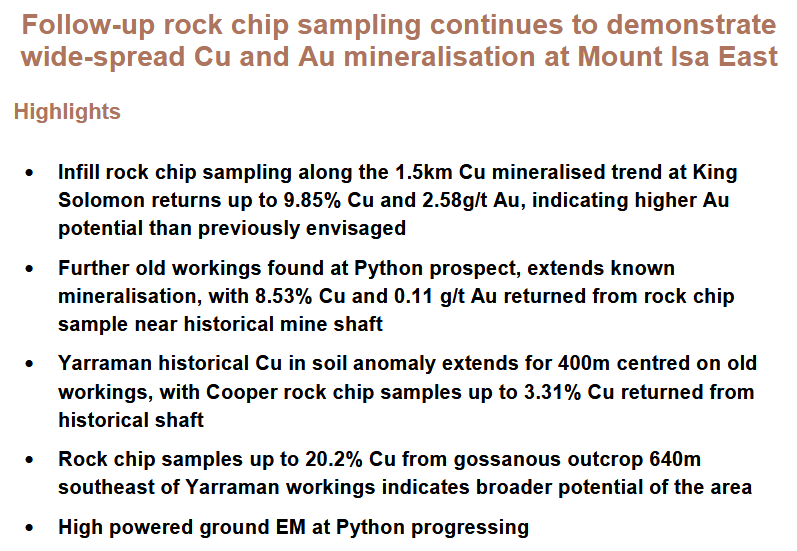