Did not see a thread for this company so thought I would start one. Has anyone else looked at these? Got to say there is enough there on first glance to make me dig a bit deeper and try to understand the business a bit better.

IT services and consulting so not your standard specy junior mining explorer that you usually find at this end of the market. They also have revenue, profit and dividends which make them rarer still.

Super micro cap of approx $25 mill. Just over $4 mill cash in the bank. No Debt. Founder and insiders hold approx 40% of the company. Has used the money made in the last year to pay off its debt and pay its creditors. Has kept the dividend payout ratio to a sensible level. Price looks reasonable to me, despite a recent run.

So I guess my question is: Any IT experts out there that have an opinion? What makes this company different from any other IT consulting mob out there? Anyone ever worked for them? Any and all opinions and insights appreciated.

i probably made the wrong choice by not averaging down when it dipped below 17c .. but i didn't i parked the cash elsewhere

i have invested in different IT stocks ( DTL , GTK , HSN TNE for example ) and have done MUCH better ( even if i had grabbed a truckload @ 17c )

what makes them different ???
they are a small cap,mining services company that HASN'T gone broke and is probably low debt .. tell that to BLY ( and a few others )

Sorry @divs4ever , Mining Services & Mining Projects? Do you mean IT?

As far as I can tell CGO don't really do any work for the miners. Their client list is mainly banks, insurance and gov agencies. See below taken from their investor presentation.

I understand what you mean about not paying to much for these. At the moment this is only a small starter position for me until I understand this a bit better. Microcaps can be VERY volatile. 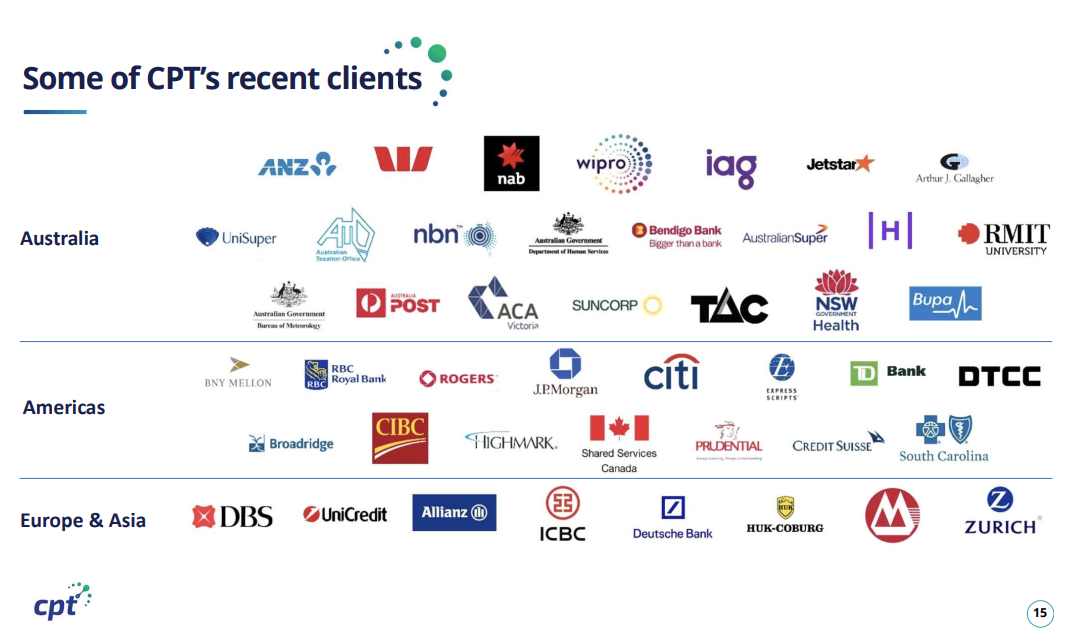 What should I look for in a Company?
2