Cove Resources Limited (CVE) is an Australian based mineral exploration company that has the right to earn up to 100% equity interest into four Gold Projects that make up the Goongarrie, Carosue, Sunrise Dam and Spargoville Projects located in Western Australia.

BidEnergy Limited has been doing well in 2018 so far. After being re-instated to official quotation today after an almost three week voluntary suspension, the company announced that it has won a tender to provide energy spend management services to leading telecommunications and media company, Singtel Optus. The company also revealed that they have actively pursued and successfully won several other customer contracts during the last quarter, including a contract with leading global brand Berkshire Hathaway in the USA for the BidEnergy solution.

Nice move north for BID today, albeit on relatively low volume. No news released, so I'm not sure what the catalyst is. Something in the wind perhaps?

Based on the jump in share price we should see a "please explain" from the ASX later today. It will be interesting to see the company's response to that.

greggles said:
Based on the jump in share price we should see a "please explain" from the ASX later today. It will be interesting to see the company's response to that.
Click to expand...

I was right about the speeding ticket. Here's the company's response: 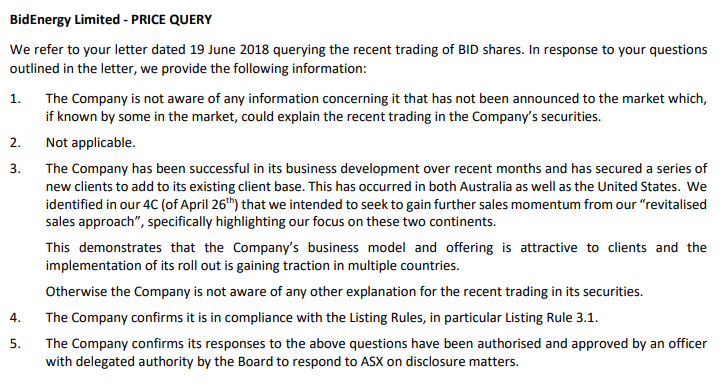 The BID share price is holding up nicely and volume today was huge. The buying pressure is absorbing all the selling and the sell side of the market depth is thinning out. This looks set to break through 6c.

I flagged this one in my thread yesterday - too thin for me but a class @tech/a set up if I've ever seen one.

Well look at the past price action (Including todays) and refer it to our thread on charting.
Pull back after wide range break out bar
Volume shrinks
Flag type pattern
Price pops out.
Perfect!

BidEnergy up another 21% to 9.8c this morning. No news since 12 July. Volume is heavy today with almost seven million shares traded so far.

Unfortunately I wasn't looking at this map.
But it was still there for those that did.
K

tech/a said:
Perfect again.
Its like a road map.

Unfortunately I wasn't looking at this map.
But it was still there for those that did.
Click to expand...

Close will be interesting but due for a breather given:
- 10c tagged
- High volume
- Over extended
?

Exit now and add back to the watchlist or let it run?

Sorry just got back to the office.
Your right it will settle back.
If I was in Id be seriously looking at getting out from 10c
Depth is rubbish
K

T/A i had a small parcel which I exitted this afternoon. will buy it back pretty quickly if need be but these turn down as quick as they run up most of the time!

Nasty Reversal game over for me!
Did you get tempted Kid?

kid hustlr said:
Will buy it back pretty quickly if need be but these turn down as quick as they run up most of the time!
Click to expand...

tech/a said:
Nasty Reversal game over for me!
Did you get tempted Kid?
Click to expand...

I bought the break of 6c and sold at 9.5c after it traded 10c a couple of days back. Never got back in on the re break of 10. That’s more luck than good trading mind you.

For me the initial set up at 6c is as good as it gets, as always for me however it’s the trade management from there which must be analysed. 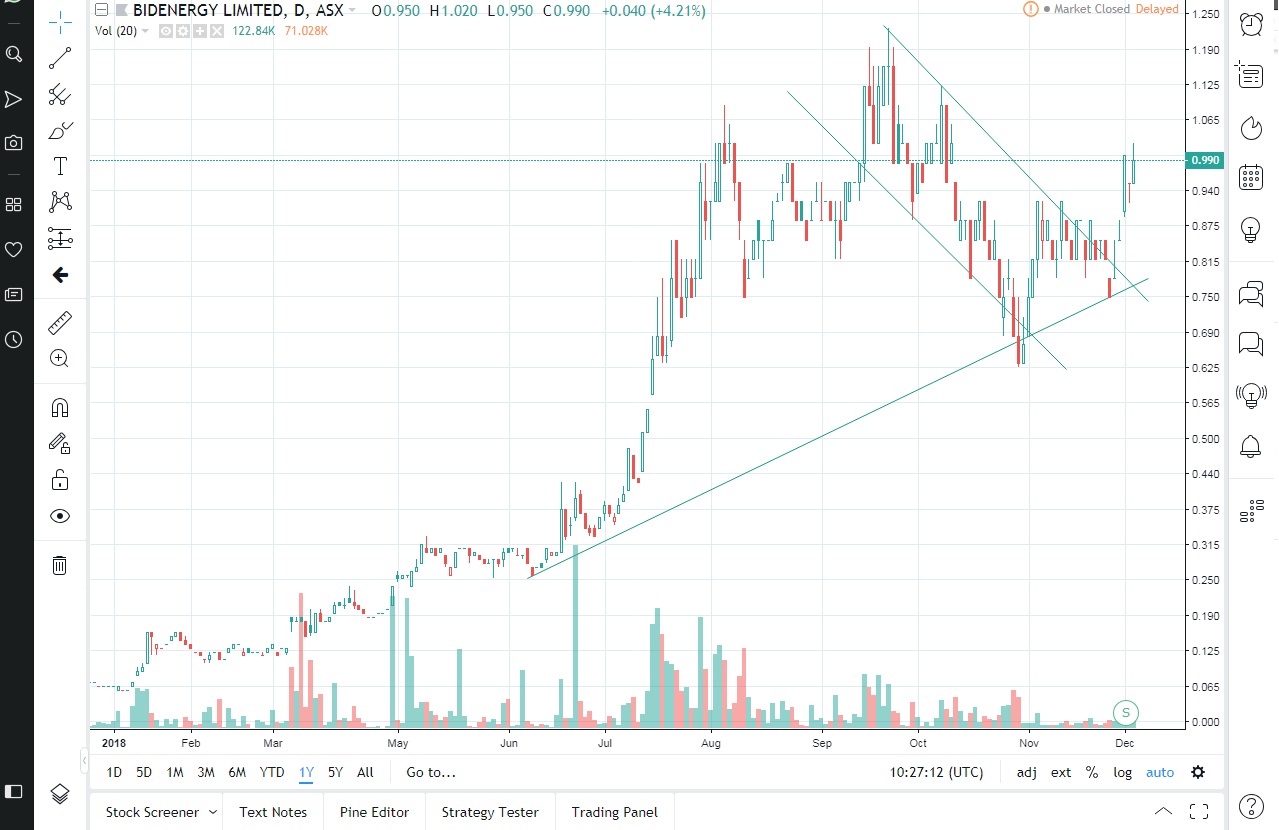 Announcement regarding the acquisition of a material customer contract Monday
https://www.asx.com.au/asxpdf/20181213/pdf/4416083z84yky1.pdf

Some drama over at BidEnergy recently with former director James Baillieu writing to BID shareholders about the circumstances regarding his "removal" on 22 February 2019. 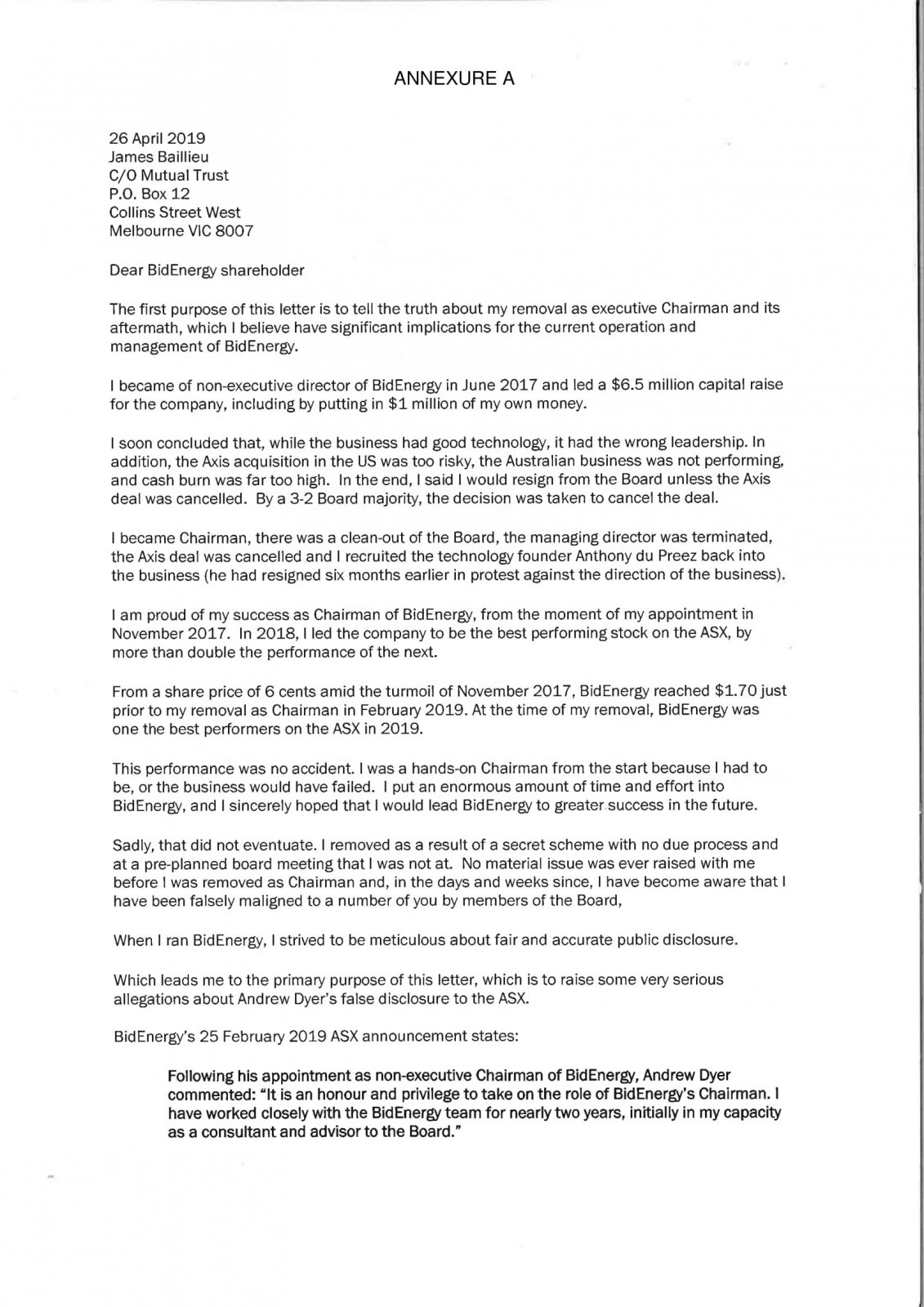 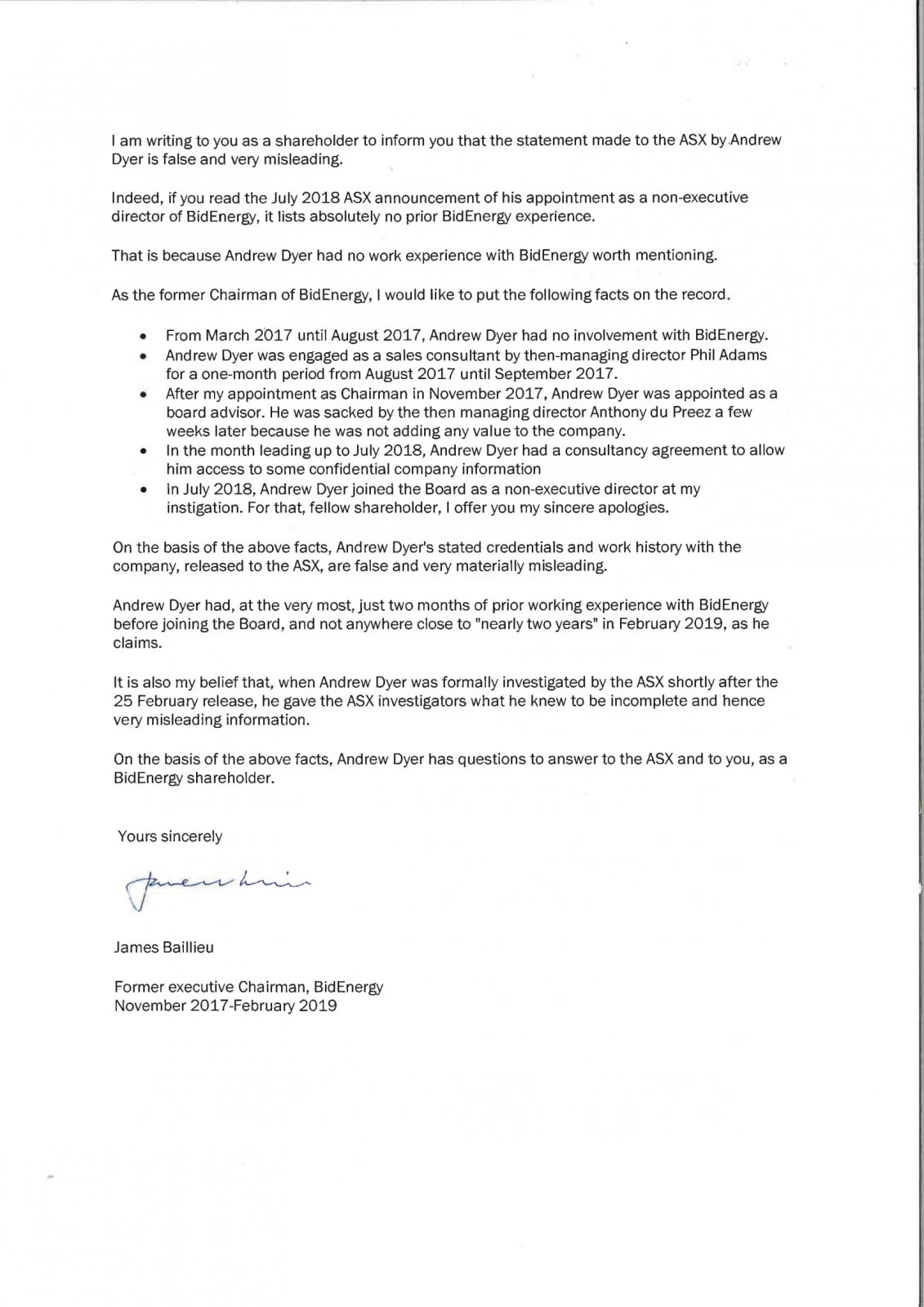 As @greggles mentions above, there was a lot of boardroom drama at Bidenergy, but the new chair and ceo seem to have settled down to work and implementing a strategy to realise the potential in the business and execute it with the urgency required to achieve first mover advantage in key markets such as AUS/NZ, UK and USA, Europe and Asia. As part of this they recently raised $6.6 through share placement to fill up the coffers.

Their core offering is a business solution that automatically manages, on a per site (per digital electricity metre) the incoming electricity service. Their energy data management service (cloud based) automates processing electricity bills, reconciling the bill to usage and providing analytics. The system keeps track of the electricity contracts and can match supplier offers to the individual business site.

They are now moving out of just electricity to other utilities and beyond into other contractual services businesses subscribe to such as council rates. They are also moving into providing data and analytics services to retail brokers such as iselect and even providing analytics and data back to suppliers.

1. It is addressing a genuine need and provides a significant cost benefit to users, in terms of reduced manual administration costs and reduced energy bills. In the USA their business model is doing well from realising energy efficiency dividends/rebates available to businesses that improve their energy efficiency.

2. It is scalable. They are able to scale the system (all hosted on Amazon AWS) to handle the huge volume of real time data being generated by hundreds of thousands of sites they are looking to scale up to. They are also white-labelling their solutions for other service providers.

3. They have an opportunity to seize first mover advantage through scaling quickly in the key geographic markets they are targeting through capturing the largest and therefore most valuable real time data and market intelligence.

4. That data and market intelligence should be highly valuable in providing analytics to all stakeholders (consumers, brokers, suppliers, industry, policy makers and so on).

5. It's a great example of the transformative economic opportunities from the emerging internet of things attached to automated, self learning, real time bot processing based business administration, decision support and financial management.

It's early days for this blue sky business and there is a lot of execution risk and potential competitive risk. They released their most recent sales results in a quarterly report today. Worth checking out.