To this end, the Company and its wholly owned subsidiary, Antipa Resources, have entered into a sale agreement with Centaurus Metals to acquire a package of prospective tenements covering 1,714 square kilometres in the Proterozoic Paterson Province of Western Australia.

The Tenements are located approximately 100 kilometres north of Newcrest’s Telfer gold mine and include the drill defined gold and copper deposit known as the Magnum Deposit.

Citadel Project
The first phase of the 2012 Exploration Programme (Phase 1) commenced in April 2012 with the following objectives:
● Complete step-out diamond drilling at the Magnum Deposit with the aim of extending mineralisation to the north and south of the existing resource area and test for higher grade mineralised structures, thereby greatly enhancing both the understanding of the mineralised structures and the broader potential of the deposit.
● Carry out extensional drill testing of 20m to 50m wide zone, located along the western side of Magnum which hosts higher grade copper mineralisation.
● Drill test several Magnum structural targets, identifying higher grade mineralisation including testing the interpreted convergence of mineralised structures to the north.
● Drill test the Corker EM target identified during the 2011 Exploration Programme.
● Carry out a broader aircore drilling Programme to delineate the extent of mineralisation within the Magnum exploration corridor and strategically within the greater Magnum Structural Corridor including the Magnum Dome.
● Conduct ground based geophysical surveys to screen, refine and prioritise targets.

Corker Prospect
Antipa commenced Phase 1 with drilling at the ‘Corker’ prospect, which is a high quality, ‘bullseye’, late-time electromagnetic conductivity anomaly located less than 4 km north-northwest of the Magnum Deposit. This is the first prospect outside of Magnum which the Company has tested with drilling. Four diamond drillholes have been completed.
As announced on 13 June 2012 mineralisation was discovered in the first drillhole completed at Corker, 12AMD0015 which returned an intersection highlight of 0.13 metres grading: 772.0 g/t silver, 14.8% lead, 1.86% zinc, 0.85 g/t gold, 0.52% bismuth and 231.5 g/t tellurium.
Three of the four drillholes, 12AMD0015, 12AMD0018 and 12AMD0021, intersected narrow semi-massive sulphides with minor associated disseminated sulphides and strong alteration up to 10 metres wide, while the third drillhole, 12AMD0019, intersected minor copper sulphide (bornite and chalcopyrite) mineralisation with the expected location of sulphides in 12AMD0019 obscured by a post mineralisation (Cambrian) dolerite dyke.

The Company believes that Corker has the potential to lead to a significant discovery as:
● The orientation of the mineralisation in 12AMD0015 when taken together with an interpreted DHEM off-hole conductor suggests untested targets exist to the north of the current drill section.
● The mineralisation encountered to date does not explain the strong electromagnetic conductivity anomalies generated by airborne, land and downhole surveys.
● The source of the Corker electromagnetic anomalies have been modeled as being up to 15 times more conductive than the nearby Magnum gold-copper mineralisation.
● There has been no material encountered to date by the drilling which could otherwise explain the electromagnetic conductivity anomalies.
● The style and intensity of hydrothermal alteration encountered to date, together with the associated mineralisation type, suggest that the fluids responsible have been derived from a nearby granite which accords with the Company’s exploration model.

Magnum Deposit
Magnum is a +2.2km gold, copper, silver and bismuth exploration prospect which hosts the Company’s maiden JORC Inferred Mineral Resource which was announced earlier this year.
The Magnum deposit has similarities to the Telfer gold-copper deposit.
As part of Phase 1 of the 2012 exploration Programme, a total of 7 diamond drillholes have been completed at Magnum, which intersected significant mineralisation 400m to the north and 600m to the south of the existing Inferred Mineral Resource.
Drilling at Magnum has confirmed copper-gold sulphide mineralisation occurs over an area of +1.8km x 600m, and remains open in all directions.
Assays for the drillholes at Magnum are expected to be received during the quarter and the Company expects to be in a position to announce those results by the end of Q3 2012.

Can be found on the bid

This little boy is showing some interesting activity recently. Will be watching today's bar for a trade..... later.

While Chart Readers are "expecting" a breakout (I have today double up during the pullback), some funny games appear to be played with Iceberg offers being declared at 6c, moved up a tick or three, back down again, then withdrawn altogether ...

While Chart Readers are "expecting" a breakout (I have today double up during the pullback), some funny games appear to be played with Iceberg offers being declared at 6c, moved up a tick or three, back down again, then withdrawn altogether ...

I would confirm that the breakout was on today. I'd mentioned it in the breakout thread a couple of times and have enjoyed a nice boost in profits thanks to an extremely strong run into the close. Great volume and a pretty good close.

Whilst there a likely to be games being played, I don't try and decipher what the motivations are... merely follow what the chart says and trade it. Use the likes of the wykoff method to say big pools/operators control the stocks and move the market to where they want it to go. I'm hoping that this is one of those that I can ride coattails on... so far so good.

Not much activity on the AZY thread but recent drilling results are looking more than a little bit interesting ....

Nice widths on the Gold, and tasty Copper and Cobalt credits .... looks good!

I've continued to accumulate this little battler as I see it as a potential flyer sometime over the next few months ...

Good to see the Company hire the services of Peter Bacchus and company in todays announcement. Bacchus Capital have been big players in the mining/resource sector for a long time and carry some real clout in the M and A area.

Given their current resource/projects the current SP looks very undervalued and worthy of a re-rate ... we shall see what eventuates

Ended up selling the bulk of these as the wheels fell off on the way down.

I hold a modest amount.

This is your kind of setup isn't it @tech/a ? … Spike on volume … low volume retrace …. bounce on volume …. 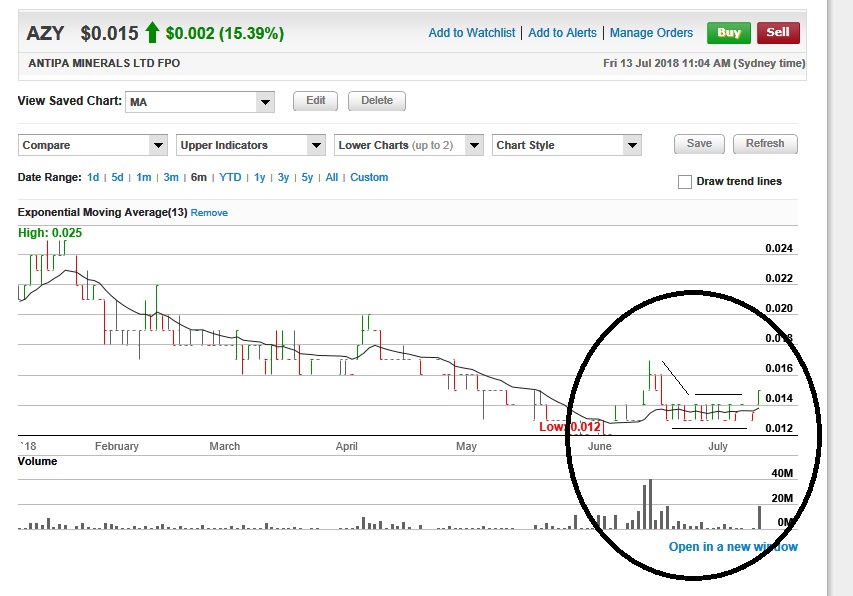 barney said:
This is your kind of setup isn't it @tech/a ? … Spike on volume … low volume retrace …. bounce on volume
Click to expand...

Yes it is.
But I would be very careful trading very small micro caps.
The same principals apply but to put it in perspective 40 million traded at .012c is $48000.
That's a good night out with a few friends in Montecarlo.

Thumbs
Average over 10 trading days for me.

Given the recent SP performance of AZY, the recent Cap Raise at $0.012 cents per share was fairly well supported with around shareholders taking up 57% of the offer and the rest being underwritten.

The Company now has plenty of available Cash for the next drilling campaign.

The share price immediately bounced off the cap raise price and is still holding around $0.015 cents.

Given the high number of shortfall shares issued I expect a bit of churning, but the positive price action since the CR indicates there is plenty of support at these levels and AZY now looks a low risk medium term trade.

Initial good drilling results today ….. Been very unloved last few months but there are some signs after bouncing off the recent lows in June that it could turn around … Needs to break the .015-.016 area with some momentum …….

Will post a chart etc later tonight after the close ….

Less effort required this time at the 0.015 area …. My projection of how the Chart could play out … 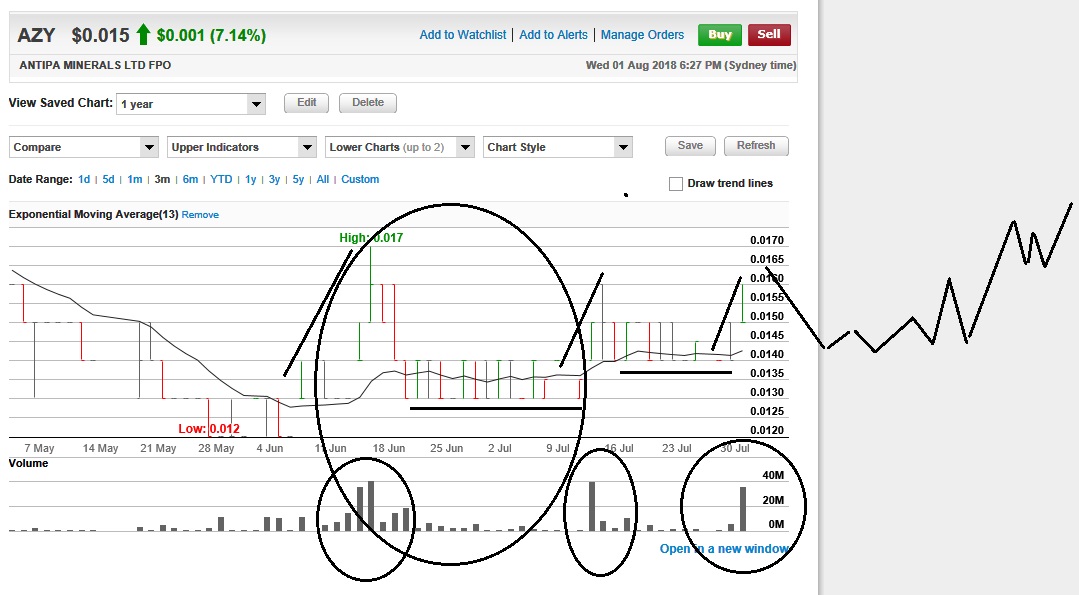 barney said:
Less effort required this time at the 0.015 area …. My projection of how the Chart could play out …

Hey @barney, Antipa Minerals is finally seeing some of that momentum you predicted back in August. It started to move at the beginning of November following the Quarterly Activity and Cashflow Reports announcement.

Huge volume and gap up this morning for which there doesn't appear to be any catalyst. Is there some news due about now?

Hey @greggles ….. AZY are getting some near-ology benefit ...They have an earn in agreement with RIO which could eventually see RIO stumping up tp $60 million for a major stake in one of their Patterson province projects….

PLUS …. apparently RIO have been buying up all the available land they can get their hands on, and AZY hold a lot of tenements in the same area ….

Bad timing unfortunately … but you win some you lose some

The SP could keep going as the day traders will be loving the story and in the end there will likely be some substance to the story given RIO's involvement.

Pretty sharp drop off the recent high but given there would be a few stale bulls … plus profit takers from the recent SPP … it makes sense to see a healthy retracement.

Todays news on the last round of drilling threw up some ok results but nothing to get too excited about.

The RIO land grab will likely be the catalyst for short term price jumps ….. I no longer hold. 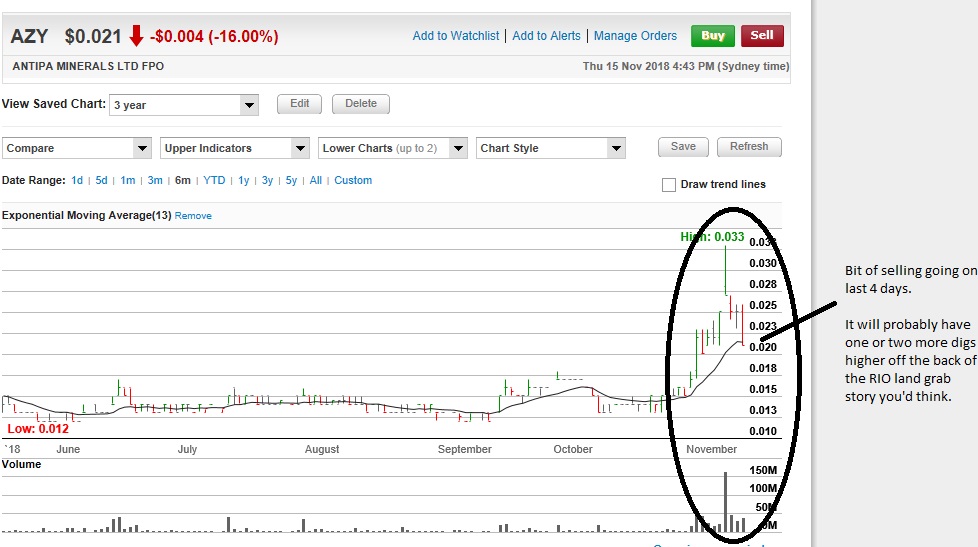