AMMG was incorporated on 8th May 2007 for the purpose of securing tenements over land that had been subject to historical exploration and where significant geological data was available and / or the land was considered sufficiently prospective due to proximity to existing resources and infrastructure.

The Company has identified five separate project areas, located in Western Australia and Queensland, which the Directors believe may have the potential for the realisation of economic resources of these commodities - iron ore, gypsum, mineral sands and gold.

The Company has one granted tenement and 18 applications for tenements covering in excess of 4,000 square kilometres over the five project areas.

Re: AKA - Australia Minerals and Mining Group

Re: AKA - Australia Minerals and Mining Group

Not a holder but I thought it a niche market and an interesting story ... production cost per kg lowest in the business, recent capital raised at 15c, project finance/build via Germany being finalised, 250 years of JORC resource, still 3 years from production so a bit of a wait, low MC. Demand for product I am unsure of but I noted they have a use for it in Lithium batteries. The Altech industrial sapphire from kaolin minerals video ....

ATC appear to be going though an orphan period whilst site clearance gets started. They have popped off a low of 0.12 with someone realising the market doesn't need to dictate to fundamentally good stories. One to watch for an appreciation of progress as they move to development. 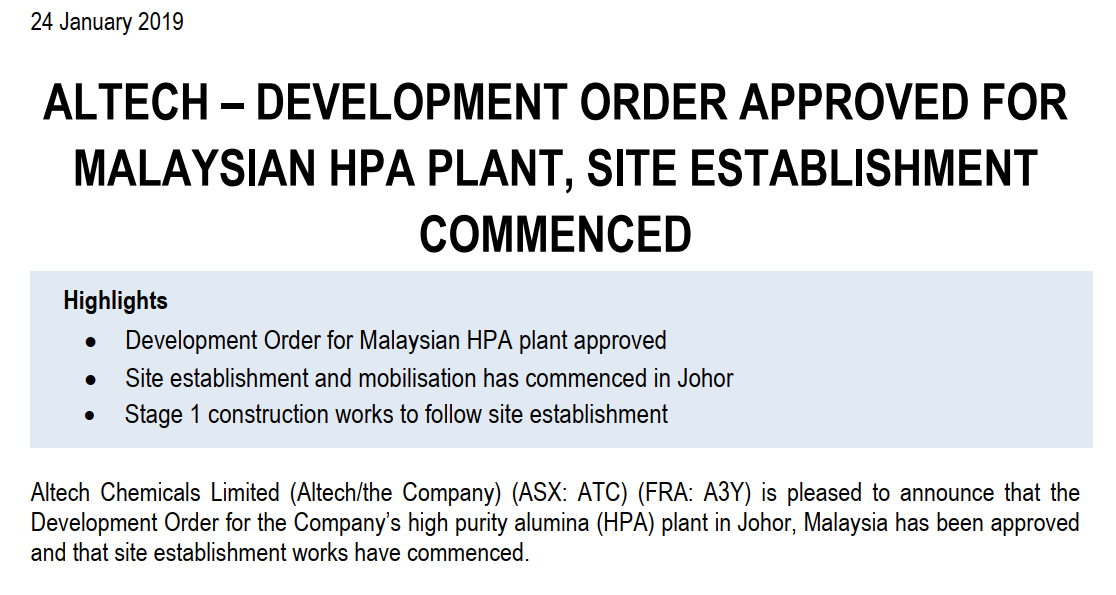 Malaysia's approval of their development order perked up the price of ATC. However ATC will require more capital to fund the build as it proceeds. Not sure what is going to drive investor demand on this one. The chart look promising with a base pattern.

The chart below is part of a research project and should not be considered a recommendation to buy this stock. If you want to read more about the project log in to read the P2 Weekly Portfolio thread.

Setup: Solid chart basing pattern.
Grade B due to my concerns about investor demand and the need to raise more capital during the build.
Buy limit: 0.10, iSL 0.085, initial target 0.15

Turns around on volume each announcement and on a good uptrend now.
Finance completed and construction underway, will be interesting to see if there is an orphan period.

doogie_goes_off said:
Turns around on volume each announcement and on a good uptrend now.
Finance completed and construction underway, will be interesting to see if there is an orphan period.
Click to expand... 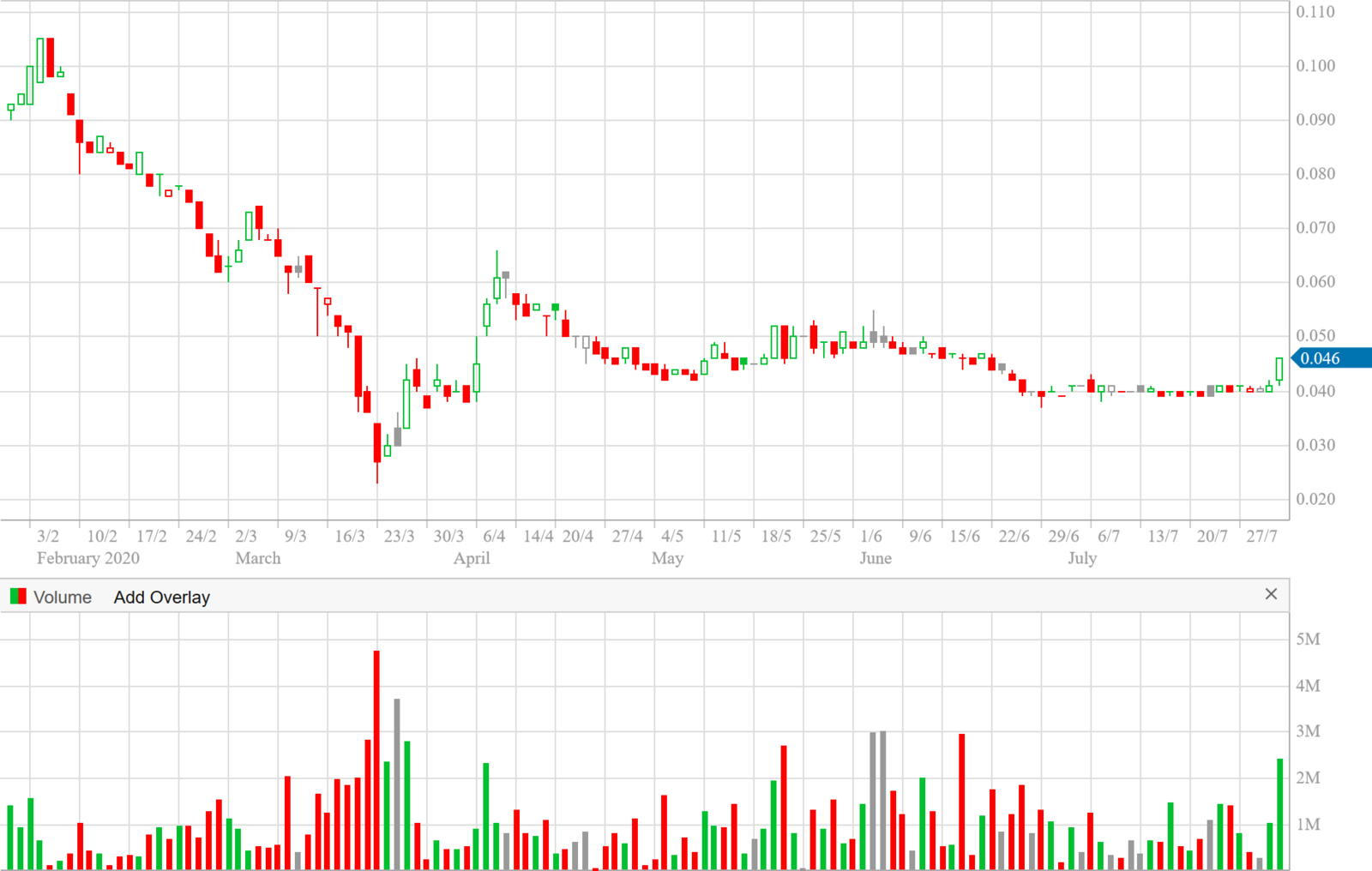 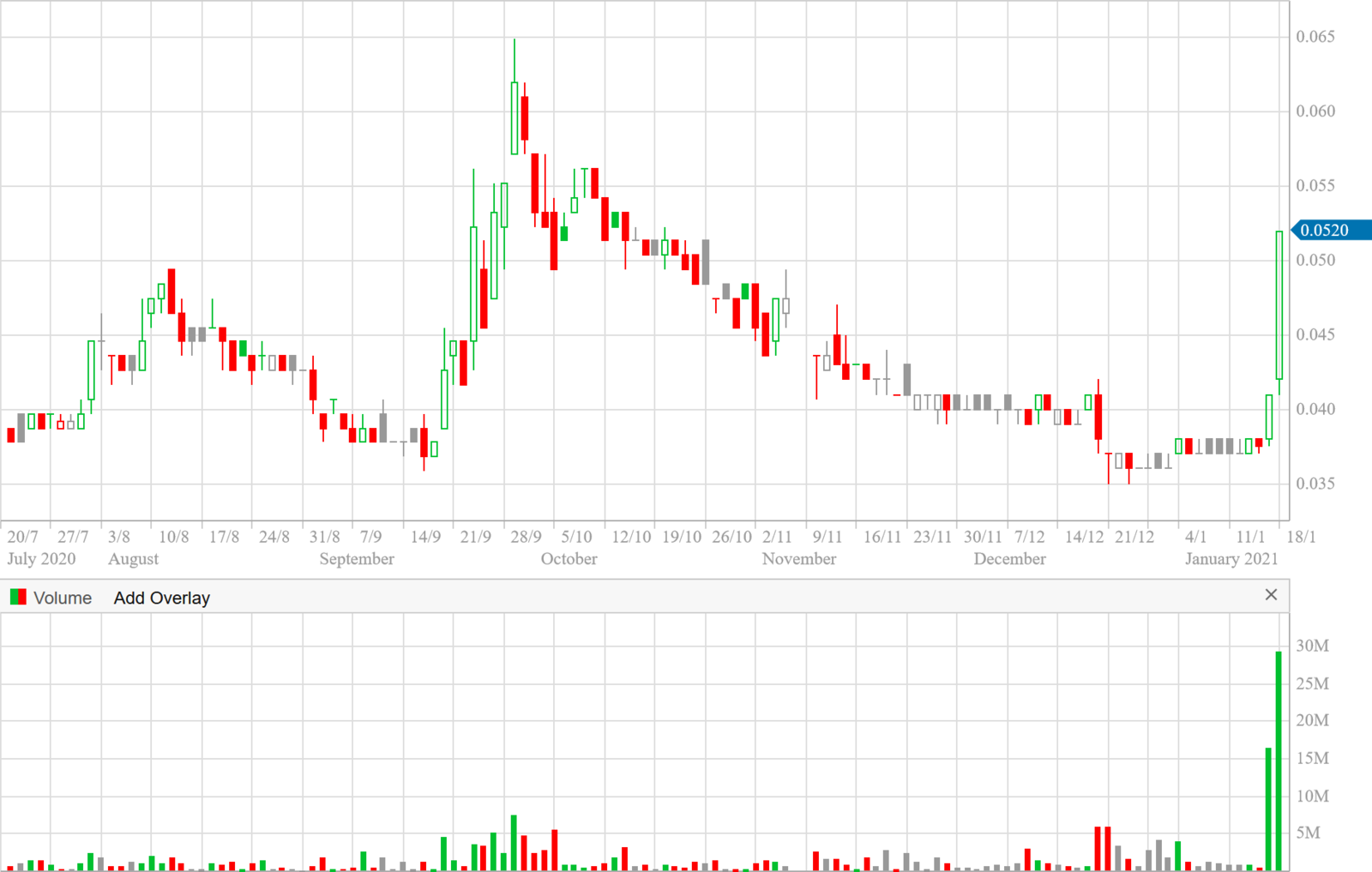 Seems this will go up to 1 cents soon.

No real news since the ASX Query of 18 Jan

On Monday ATC stated it has commenced battery performance testing of graphite particles that have been coated with high purity alumina (HPA), using Altech’s coating technology.

And I guess inclusion of all three: Li-ion battery, graphite and HPA is enough to get the punters excited

On Monday ATC stated it has commenced battery performance testing of graphite particles that have been coated with high purity alumina (HPA), using Altech’s coating technology. And I guess inclusion of all three: Li-ion battery, graphite and HPA is enough to get the punters excited
Click to expand...

but that was talking about Meckering kaolin tenement and plant, and Johor HPA processing. Now there is a Saxony (up against the Czech border) element introduced, with a study looking at pre-feasibility for a battery materials coatings plant, for 10,000 tpa of graphite coating:
• Collaboration agreement with SGL Carbon
• Alumina coating of anode grade graphite
• Europe leading synthetic graphite producer

plus Secondary Funding .... Listed green bond
• Target raising of US$144 million
• US$100 million as project debt
• Balance as prepaid coupon interest
• Bonds to be listed in Frankfurt
• Five year term

This article in The West Australian by Matt Birney looks to be the reason for today's bullish price action: https://thewest.com.au/business/pub...-lithium-market-with-hpa-technology-c-4152828

Some real potential here. Tempted to take a position.

ATC is nudging 10c this morning. They have released a new video, "Lithium-Ion Battery Update" that can be viewed below.