Althea Company was founded in Melbourne in 2017 with a view to acquiring the necessary licences and permits to import, cultivate, produce and supply medicinal cannabis for eligible patients across Australia. Through strategic supply and distribution partnerships, Althea Company has been able to commence sales of five Althea branded medicinal cannabis products in Australia.

Althea Group proposes to grow its current revenue through implementing targeted strategies aimed at increasing sales of imported medicinal cannabis products and expanding its current local operations through the construction of a 4,080m2 cannabis cultivation and production facility in Skye, Victoria. The goal is to produce approximately 3 tonnes of high grade dried medicinal cannabis flower each year at the facility. Subject to future local or international demand, a supportive business case and Althea Group obtaining the relevant licences and permits described in sections 3.8 and 4.3 to export cannabis products, Althea Group may assess at the appropriate time the potential to expand the size and scale of its proposed cannabis cultivation and production facility to capitalise on increased local demand and any future available export markets.

It is anticipated that AGH will list on the ASX during September 2018.

Great start for Althea Group Holdings after listing on Friday. Offer price was 20c per share and it is currently trading at 69c. You don't see stag profits like that much anymore on new floats. Well done to all who got on board in the IPO.

Agriculture Victoria has given Althea Group Holdings (ASX: AGH) the green light to cultivate hemp in the state, while Tissue Culture Australia has agreed to assist Althea in developing tissue cultures for its proposed growing facility.


The hemp cultivation licence now enables Althea to grow and process low-THC hemp plants, which the company plans to do at its Victorian production facility, which is planned for commissioning next year.


Tissue cultures are believed to have advantages over traditional cannabis propagation in terms of yield, disease resistance and superior control over genetics.


According to Althea, tissue culture is also in demand with hemp growers seeking large quantities of high-quality plants to begin outdoor cultivation.

It has been yet another positive day of trade for the Althea Group Holdings Ltd (ASX: AGH) share price.

In afternoon trade the cannabis company’s shares are up a sizeable 10.5% to a new all-time high of $1.27.

This latest gain means that Althea’s shares have now gained a remarkable 535% since listing on the ASX at 20 cents per share in September.

Why is the Althea share price on fire?
Investors have been snapping up the company’s shares since its IPO thanks to a series of positive developments.

One major development was the receipt of key manufacture and export licences late last year which mean the company now has a full complement of Office of Drug Control cannabis licences.

Since then the company has seen its patient numbers grow at a very quick rate. In fact, the company reached its 1,000-patient milestone in Australia five months ahead of schedule.

But arguably the biggest development has been the company’s successful expansion into the UK market.

In May the company announced the launch of Althea Concierge UK. This is a medical education platform, which was launched in Australia in September 2018, that provides medical education and clinical evidence for healthcare professionals looking to prescribe medicinal cannabis.

This led to the company receiving its first patient prescription for Althea medicinal cannabis in the UK last month.

And it is unlikely to be the last. Also announced last month was an agreement with independent scientific committee Drug Science.

According to the release, its UK-based business has furthered its relationship with Drug Science with the goal of increasing the number of patients that can be prescribed medical cannabis in the UK market.

This comes at a time when Drug Science is just about to launch Project TWENTY21, which is the UK’s first national pilot for medical cannabis and aims to enrol 20,000 patients before the end of 2021. Althea looks set to benefit from the pilot as it has been selected to supply, on commercial terms, its range of products to Project TWENTY21.

Things haven’t been quite so positive for rival AusCann Group Holdings Ltd (ASX: AC8). A lack of meaningful developments has led to its shares shedding 40% of their value since the start of the year. 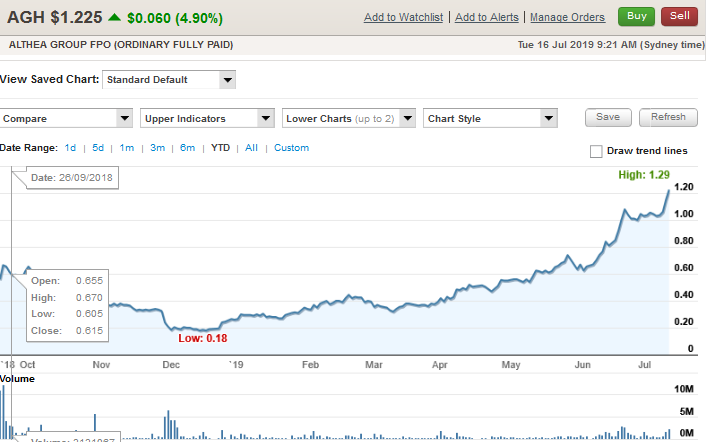 Announced a share purchase plan when the interest in cannabis stocks was high. The price promptly fell below the spp price of 0.44. It's not a promising sign when this happens. Naturally I'm not interested in the spp at a price above the current market price.
P

Hi,
I have nominated AGH as my top pick for the 2021 stock comp. This is based firstly on them sitting in what I believe to be a growing industry worldwide. Secondly, they have established themselves in Australia with the necessary licences for the cultivation and processing of CBD products within their brand new facilities. Thirdly, they are continuing to expand their market with new distribution deals within the UK, and through their subsidiary Peak Processing in Canada. I have been watching this company throughout 2020, and I think they have continued to grow as a company, both in scale and revenues. I am hopeful that the share price will reflect this in 2021 as the company continues to grow. Craig

Since the SPP in Dec20 price has drifted higher and tempted me into a speculative buy. The timing was great as price moved higher straight away. All was good as the price consolidated. I waited patiently for the next move up. Only the market didn't move up. The sentiment turned bearish and AGH was sold off along with most of the 'growth" stocks.

Never the less I held my nerve as price approached my trailing stop which was based on the weekly time frame. Be strong and hold the line I shouted. Alas, price hit my exit near the entry point and I sold.

The market is a cruel vixen, for as soon as I sold, the price spikes 13% on a day without news. I can only chuckle as the dance continues (with another partner). 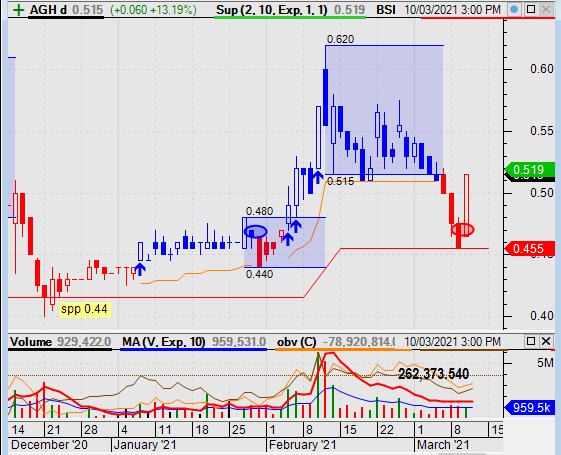