Previous discussion of this company can be found in the BFE thread: https://www.aussiestockforums.com/forums/showthread.php?t=9873

Historically a minerals exploration company with tenement interests in Western Australia, Nevada USA and the Democratic Republic of Congo, the Company has now entered a Share Purchase Agreement to acquire all of the issued shares in Animoca Brands Corporation, which operates a mobile applications/games development and publishing business.

After falling from 20c to a low of 1c over the last couple of years, Animoca Brands Corporation looks like it might be set to stage a recovery.

The company's Crazy Defense Heroes mobile game generated over A$267,000 revenue in its second week of release. The game has been downloaded 402,000 times since its launch. So far it has only been released in selected Asian territories. A launch for the rest of the world is planned for later in 2018.

Animoca Brands Corporation on the move again after retracing from 10c to 6c between 25 January and 6 February. Since then it has climbed back to 8.5c. 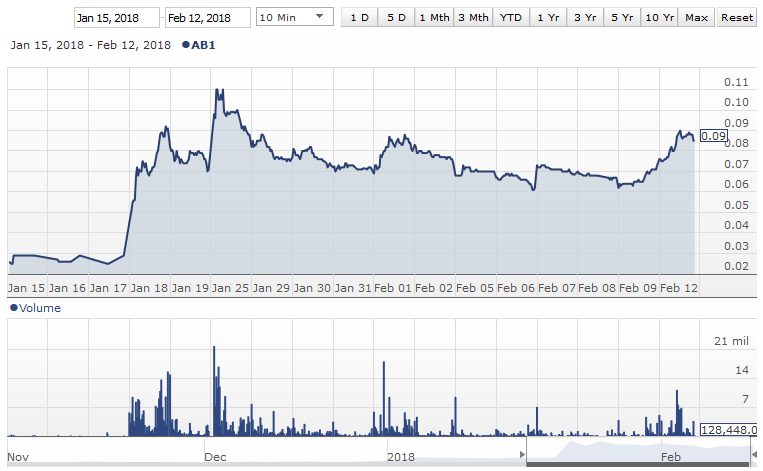 On 7 February the company announced that it will acquire a 100% stake in Finland-based Tribeflame Oy and its subsidiary Benji Bananas Oy for an upfront cash consideration of €50,000, deferred consideration of €50,000, and payments of €100,001 over time based on the revenue earned by Tribeflame Oy, and earn-out payments of up to €150,000, payable in 2020 in cash or shares at the Company's discretion.

On 9 February the company announced that Crazy Defense Heroes mobile game has launched on the App Store in Australia, New Zealand, India, African countries, and select other markets.

AB1 seems to be building up some momentum. I think it has the potential to crack 10c in the near future if there is more good news regarding Crazy Defense Heroes sales. Am watching closely.

"Like" doesn't mean I like the company; taking kids' pocket money to let them simulate violence in computer games doesn't really appeal to me.
But the chart looks promising. Flag pattern with a 12c first target.

pixel said:
"Like" doesn't mean I like the company; taking kids' pocket money to let them simulate violence in computer games doesn't really appeal to me.
Click to expand...

When I was a kid, all I wanted to spend my money on was lollies and video games. Before video games it was comic books. Kids will be kids.

It doesn't actually look that graphic.


The company will probably report in the next couple of weeks on the Crazy Defense Heroes sales figures in the new territories. That may provide the impetus for AB1 to push through 10c. Time will tell, as will the sales figures. 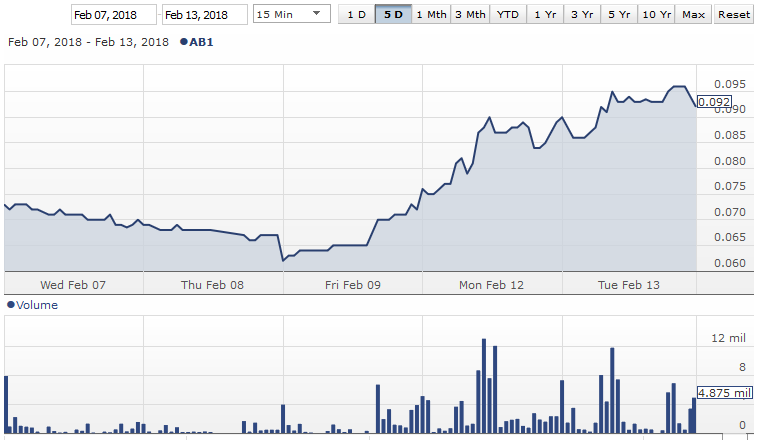 Animoca Brands Corporation is finally back where it was in February after bottoming out at 3.7c in late May. Today it gained another 14.13% to finish the day at 10.5c.

In the last few months, the good news has kept on coming. The announcements since June are too numerous to mention but include the successful completion of a $4.5 million placement via the issue of 90 million shares at 5c a share, and a number distribution deals, acquisitions and strategic investments.

Could be all-time highs soon for AB1 if the good news keeps on coming. One to watch.

AB1: Seems to be rallying while the market falls. This indicates that the demand is strong.
I've selected this one for the Dec18 monthly comp.

Animoca Brands heading back to previous resistance at 11c. Currently at 10.5c and in a solid uptrend for the last month and a half.

Today the company announced that it has established a strategic partnership with China-based iClick Interactive Asia Limited (NASDAQ: ICLK). AB1 will become a strategic reseller of iClick in a transaction which is expected to provide to Animoca Brands with initial revenue of US$8 million (approx. A$11 million) per annum. AB1 will assist iClick to expand into the international video gaming markets currently served by Animoca Brands.

Here's the skinny on iClick from the announcement:


Things are looking up for Animoca Brands.

Breakout for AB1 in early April as it pushed through 11c with confidence after announcing the signing of an agreement with Lucid Sight, Inc. to promote, market, and distribute Lucid Sight's portfolio of games in Asia, as well as to implement assets from the games into the AB1's blockchain titles as non-fungible tokens (NFTs).

The company also stated that it had participated in Lucid Sight's latest fundraising round, although it referred to the amount invested as "not material".

The following day (4 April) AB1 announced that it has entered into a binding term sheet to acquire 100% of Stryking Entertainment for an upfront consideration of €1m (~A$1.58m) payable in shares. Stryking is a leading Germany-based company and the operator of the popular fantasy sports game Football-Stars and holds an official license from the Bundesliga, the top-tier German football league, for the right to use all club logos and player pictures. Stryking also has a license from renowned German football club Bayern Munich, one of the most followed football teams globally with more than 60 million social media followers.

The number of Animoca Brands shares to be issued to Stryking will be determined at a price per share of A$0.10 and will be escrowed for 12 months after issue.

The company also announced that it has completed a strategic capital raise of A$4.6 million to international blockchain investors, high-quality Australian institutional investors, and existing shareholders in order to take advantage of multiple business opportunities and to fast track development and promotion of upcoming games and NFT launches.

On 12 April AB1 announced that it is to acquire a 75% stake in Hong Kong-based mobile games developer Skytree for an upfront consideration of A$850,000 in shares and cash. Skytree is a multiple award-winning game development studio with a portfolio of successful titles including Hachi Hachi and Trillionia, which have more than 5 million downloads.

Today AB1 announced that it will partner with global venture accelerator Brinc on the establishment of an esports and gaming accelerator. The company stated that it will lead a pre-seed investment round into Brinc's subsidiary Brinc AOA with an investment of US$750,000 (~A$1.06m).

It's been a busy month for Animoca Brands but it looks like it's moving forward in leaps and bounds.

Animoca Brands Corporation is to acquire 100% of the issued capital in Gamma Innovations Inc, developer of the GammaNow computing engine, a desktop application that allows users to leverage their computers' idle processing power to generate Gamma Points, which are used to acquire in-game rewards for their favourite games.

Consideration for the acquisition is US$350,000 (approximately A$511,600), payable in either cash or common shares of AB1's stock, and is to be determined at the Company's sole discretion on the date of the execution of the definitive agreement.

Additionally, Animoca Brands will pay to the sellers an earn-out payment equal to US$2.5 million (approximately A$3.65 million) in the event that Gamma achieves a cumulative revenue milestone of US$5 million for the three-year period measured from the effective date of the agreement.

Another gamer focused acquisition for AB1 intended to boost their audience of PC gamers and potential customers for their blockchain gaming products.

This stock is my pick for the August stock picking competition.

This gaming company has acquired interests in a lot of online game development businesses over the past few years. The current excitement in the company is over its subsidiary Medium.com and their development of non-fungible tokens (NTF), a.k.a digital collectibles and the sandbox platform that gamers can use to create NTFs which can be used in minecraft and traded. Anyway, that all didn't mean anything to me until yesterday when I viewed the video on the www.animocabrands.com home page. Anyway, their development of platforms and ecosystems for the creation and trading of NTFs will end up either being a thing or not. It's getting some interest among investors at the moment.

ASX considers that AB1 lacks adequate resources, systems and controls to comply with its obligations under the Listing Rules. While ASX acknowledges that AB1 has recently taken on some additional staff to boost its compliance resources, ASX is not satisfied that these measures will be sufficient to achieve the level of compliance ASX reasonably expects of a listed entity.

In the circumstances, ASX considers that it is appropriate that AB1 be removed from the ASX Official List.